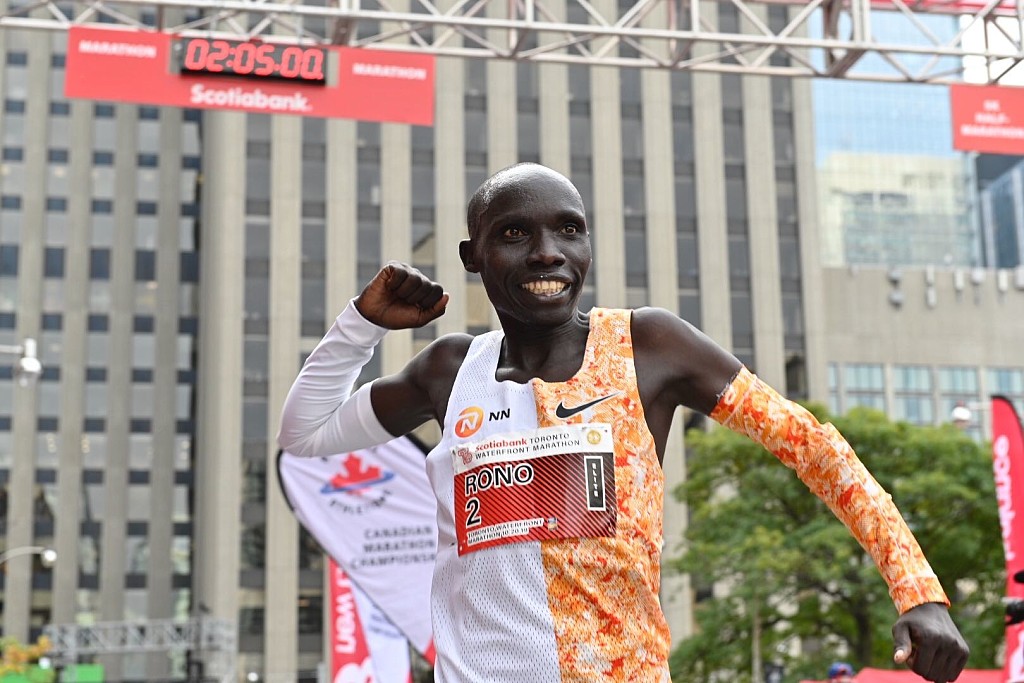 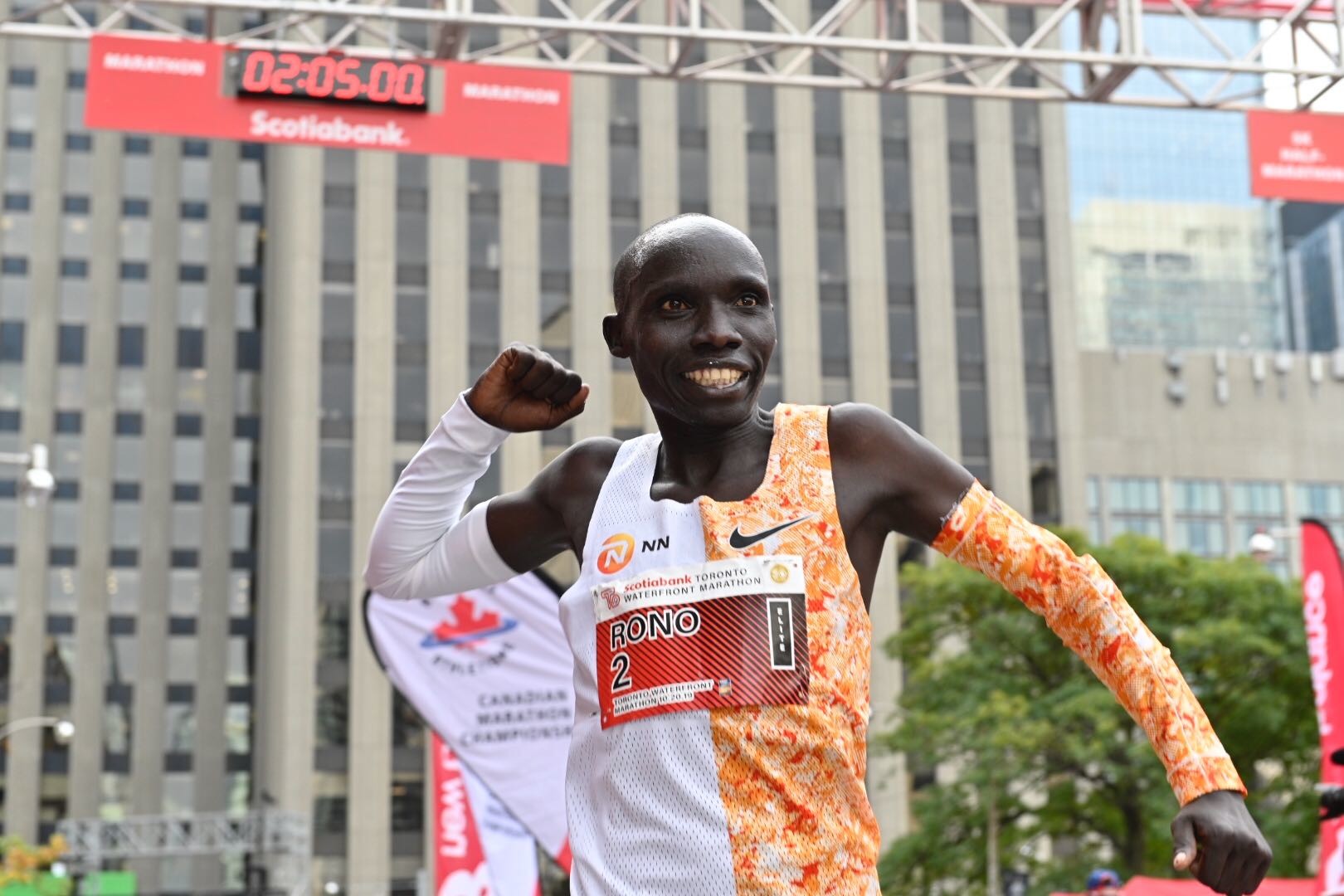 The Kenyan, nicknamed ‘Baby Police’ for his role as a policeman, smashed his own Canadian all-comers’ record with a time of 2:05:00 at the IAAF Gold Label road race.

Behind him, Lemi Bernahu of Ethiopia, who had been leading until the final kilometer, took second in 2:05:09, Uganda’s Felix Chemonges third in 2:05:12 and defending champion Benson Kipruto of Kenya fourth in 2:05:13.

“It was important to win three times, because Toronto is like my home,” said Rono. “When I come here, I enjoy myself. I have a lot of friends from Kenya here. I am really, really happy to win today.” 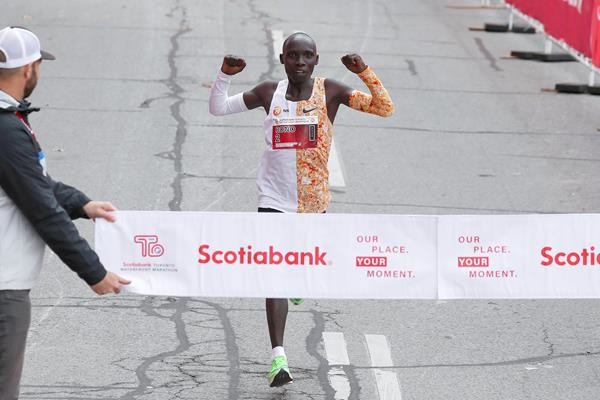 While Rono achieved an incredible record, earning CDN$30,000 for the victory along with CDN$50,000 for the all-comers’ record, it was his compatriot Magdalyne Masai-Robertson who claimed the women’s victory with an enormous personal best of 2:22:16. That beat the course record set by Mimi Belete last year by 13 seconds and improved the Canadian all-comers' record by one second. 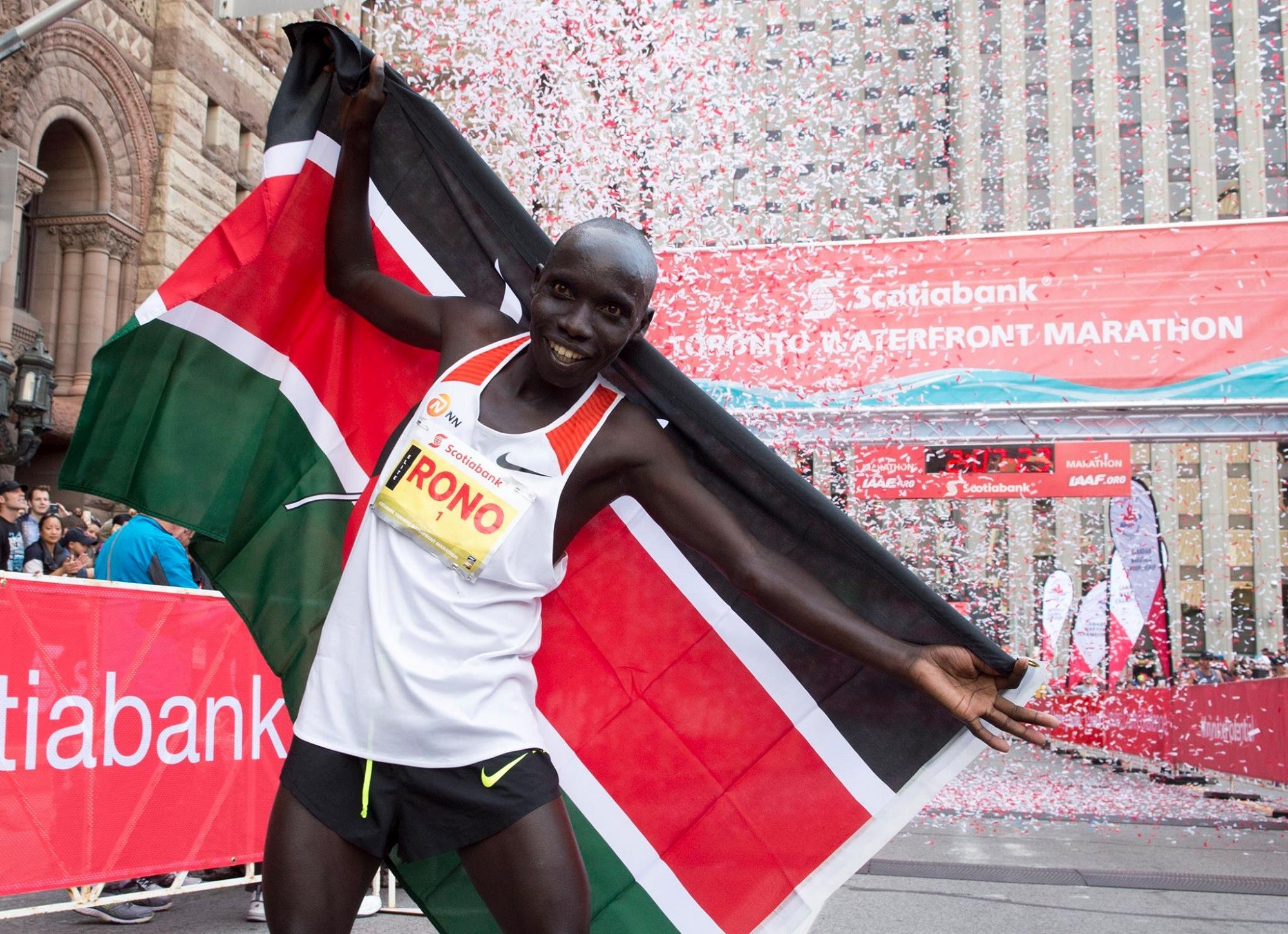 For the first time in its 30-year history, conditions were near perfect (8C and 5km/hr wind at the start).

A trio of pacemakers took a pack of six men through the halfway point in 1:03:08 and 30 kilometers in 1:29:24 before Lemi Berhanu hinted that the tightness in his legs, which had bothered him in the days immediately preceding the race, had vanished. By 38 kilometres he had surged to a lead of more than 15 seconds. But incredibly Rono closed the gap in the final two kilometres to snatch victory.

“I was running at my own pace,” Rono explained. “The pace at the front was really moving so I maintained my own pace. At 38km when he ran away I said ‘let me maintain my pace’. And I knew I could catch him.”

For his part, Berhanu, who was the 2016 Boston champion, complained of a stitch in his right side and was in distress. Disappointment registered on his face at the finish where he sat alone on the ground for 10 minutes before his coach Gemedu Dedefo collected him for the awards ceremony.

“I was thinking when I made the break I could run sub 2:05 and keep pushing, but after 40km I could not really move because of a stitch,” he explained.

The women’s race was equally compelling as eight women ran together through 30km. Five survived Birktuyat Eshetu’s surges up until 35km including Kenya’s Betsy Saina, Rachel Mutgaa and Masai-Robertson and then the race blew up. The latter took off, fearful of being caught. At 40km she spared a look over her shoulder and realised her nearest pursuer was Eshetu and quite a distance separated them.