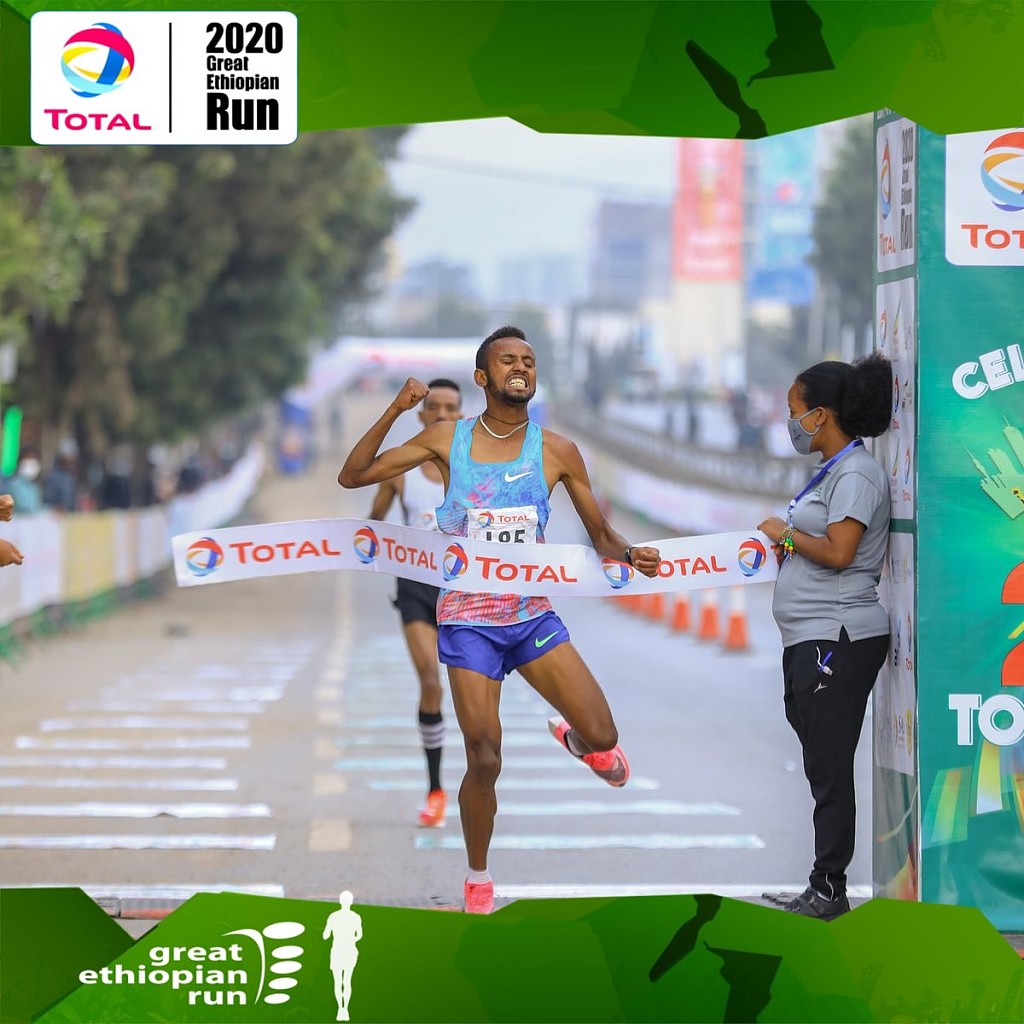 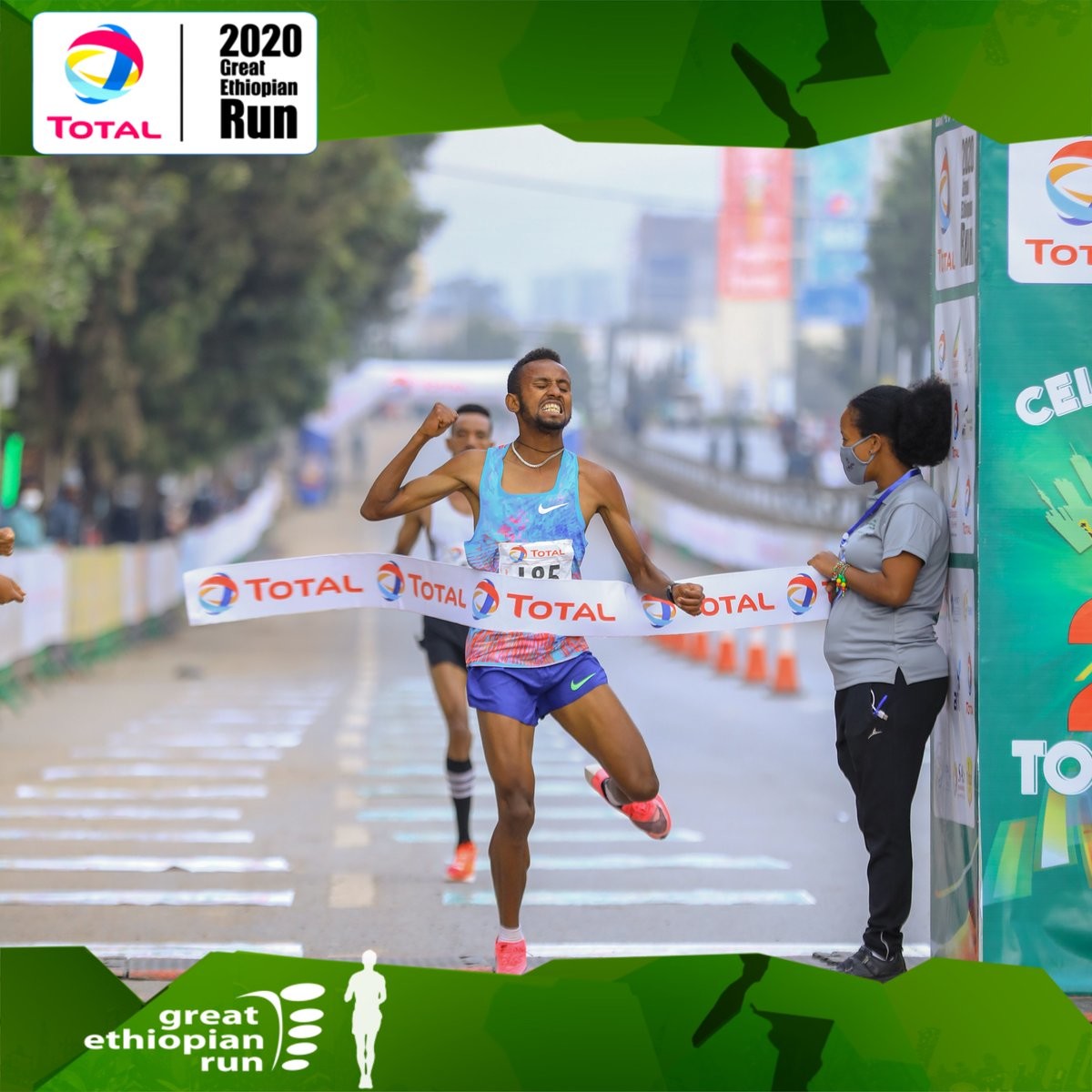 On Sunday, the Great Ethiopian Run was held in Addis Ababa, the capital of Ethiopia, and thousands of runners showed up to compete in the 10K race. This marked the 20th running of the event, which was created by Ethiopian running legend Haile Gebrselassie.

The elite races, which featured 300 athletes, saw two close finishes, with Ethiopians Abe Gashahun and Tsigie Gebreselama taking the wins in the men’s and women’s races by one and two seconds, respectively.

In total, more than 12,000 runners participated in the race, which is reportedly the biggest African sporting event to take place since the start of the pandemic. 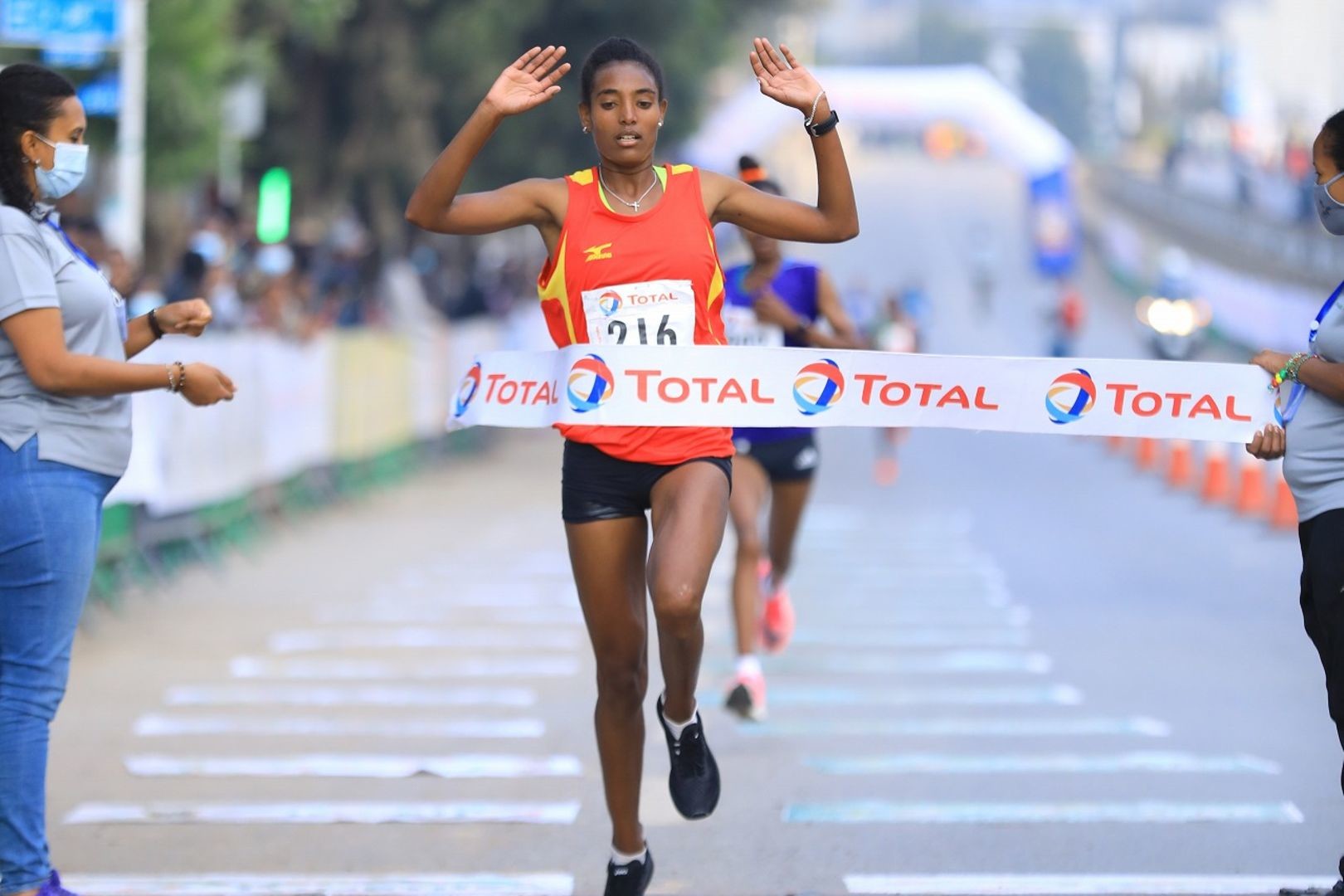 In 2018 Gebreselama finished in third at the Great Ethiopian Run. The year after, she upgraded to a second-place finish. On Sunday, at what was still billed as the 2020 race, she ran to the win, completing a three-year climb to the top of the podium. She crossed the line in 32:33, finishing two seconds ahead of Medihen Gebreselasie and 10 seconds in front of Gebeyanesh Ayele, both of whom are also Ethiopian. Gebreselama’s result is the fourth-fastest time in race history.

In the men’s race, Gashahun took the win in 28:20, finishing just one second off the 15-year-old course record of 28:19. This is Gashahun’s second win at the Great Ethiopian Run, adding to his victory from 2016. 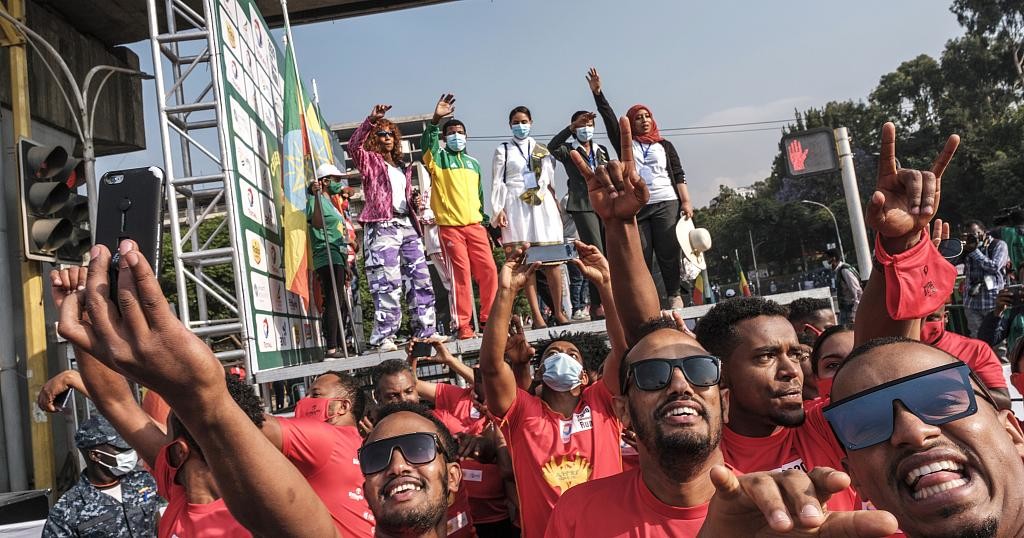 Gashahun’s fellow Ethiopians Milkesa Mengesha and Tadese Worku made him work hard for the win, and the trio battled for the top spot throughout most of the race. While Mengesha eventually faded to a 28:40 third-place finish, Worku stuck it out until the very end, falling just short of the win in 28:21.

The run takes place at more than 2,300m above sea level, which accounts for slower results than elites would normally run. For context, 76 Ethiopian men have run faster than Gashahun’s 28:20 winning time and 118 Ethiopian women have better PBs than Gebreselama’s 32:33 result.

While the Great Ethiopian Run hosted a shockingly large field of athletes, there were COVID-19 guidelines in place to ensure the safety of everyone involved. Firstly, the event was moved from its original November 2020 run date until Sunday to give organizers more time to prepare for a COVID-friendly race.

The next-biggest change was the reduction of the field size from the pre-pandemic cap of 50,000 runners down to 12,500. Masks were mandatory on race day (other than when on the course), all athletes had their temperatures checked before the run and the race featured a wave start to make social distancing easier during the 10K.

The call to hold the event with such a large field drew criticism from many people in the international running community, but Gebrselassie and his Great Ethiopian Run team ultimately moved forward with their event, reportedly working closely with local health experts and government officials. 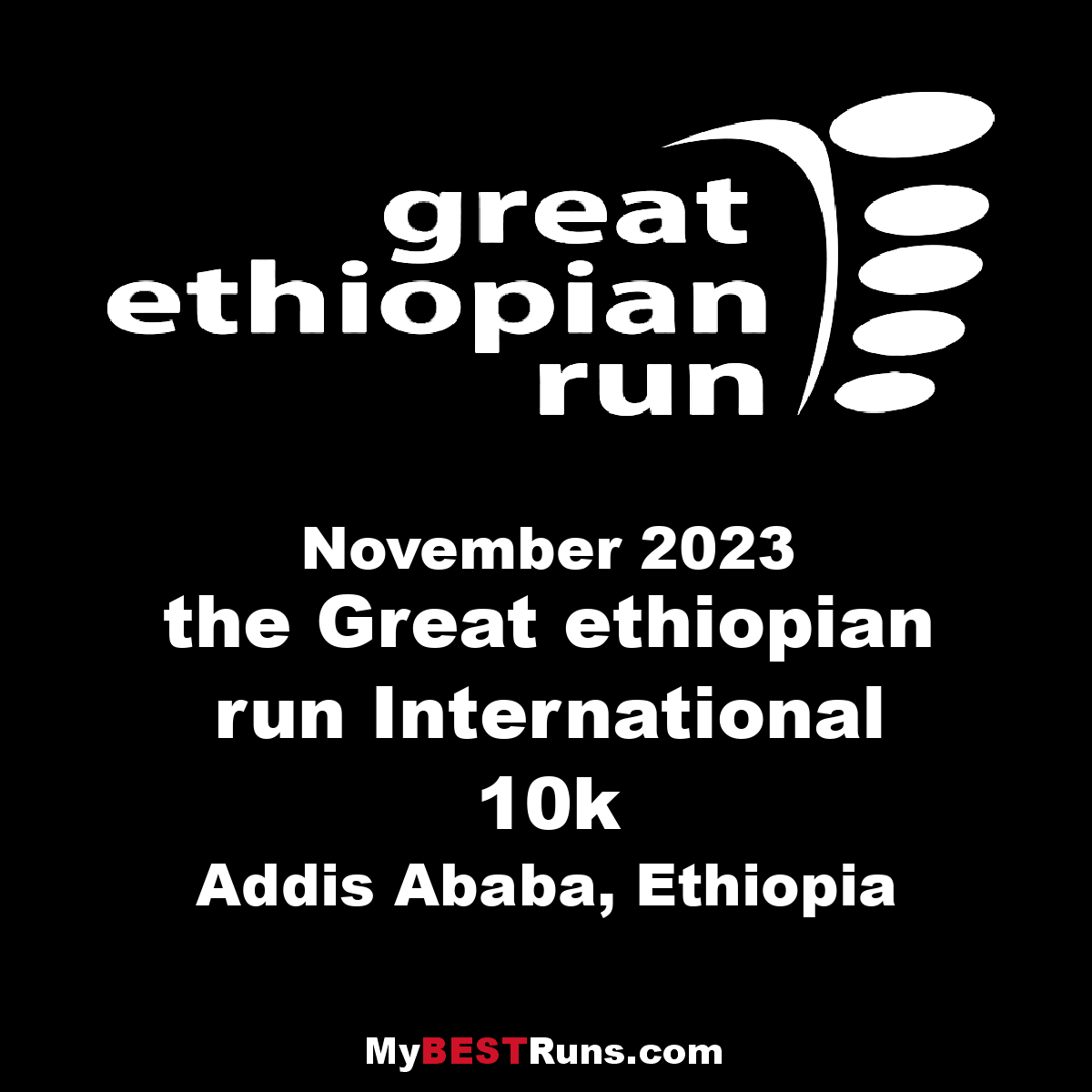 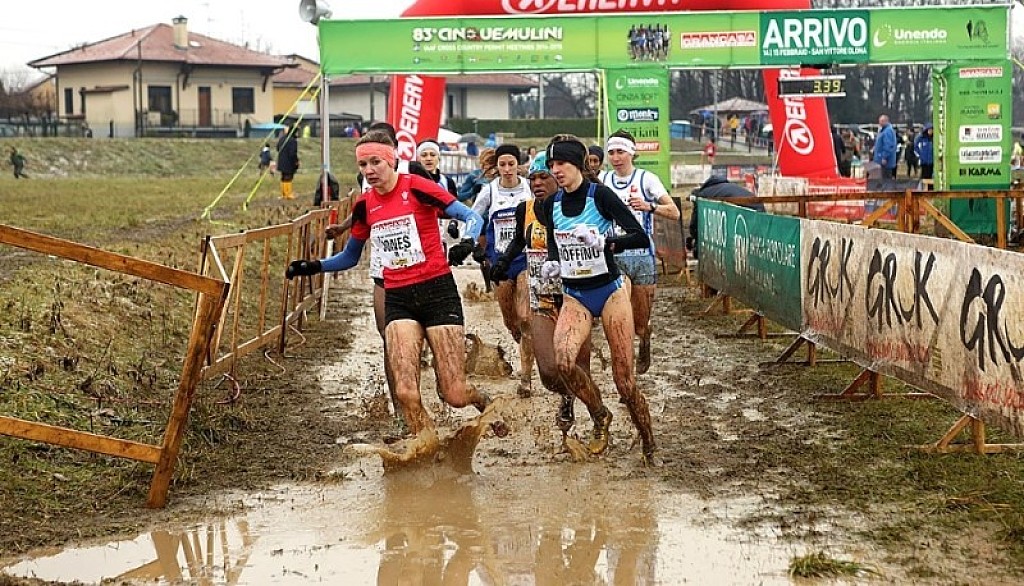 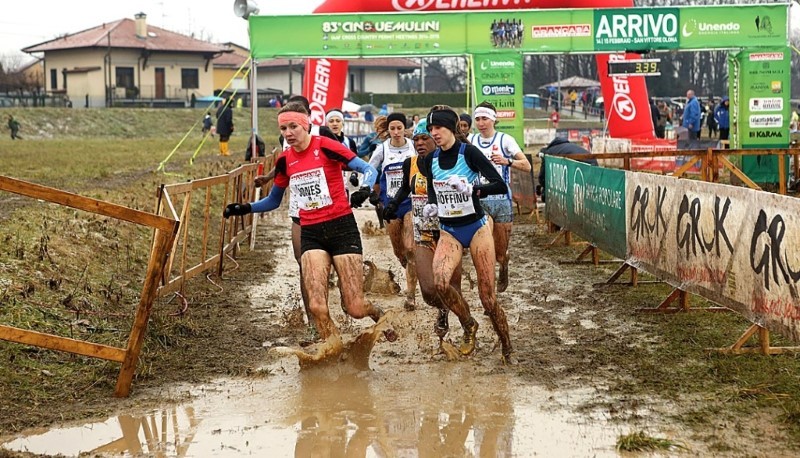 Ethiopian teenager Tadese Worku and defending champion Winfred Mutile Yavi from Bahrain will be in the spotlight at the 88th edition of the Cinque Mulini in San Vittore Olona, Italy, the seventh leg of this season’s World Athletics Cross Country Permit, on Sunday (26).

The 2020 edition of the famous Italian cross country race will be highlighted by a battle between the new wave of African stars, duded “Generation Z” by race organisers, and the best Italian middle distance runners.

Three of the top four finishers in the U20 race at last year’s World Cross Country Championships - Worku, Oscar Chelimo from Uganda and Leonard Kipkemboi Bett from Kenya - will line-up in the men’s race.

Worku, who turned 18 on 20 January, won the U20 silver medal in Aarhus last March. He has been one of most consistent cross country runners this season with back-to-back wins in the World Athletics Cross Country Permit meetings in Elgoibar and Seville. Worku also won the Giro di Castelbuono road race last July, finished third at the Giro al Sas in Trento and set career best times of 7:43.24 in the 3000m and 13:18.17 in the 5000m. 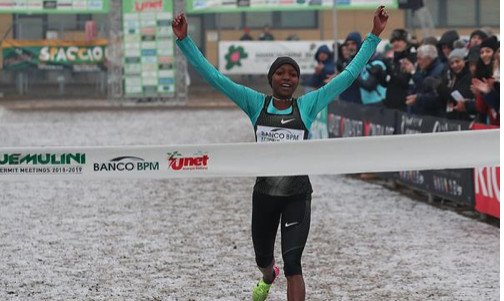 Burundi’s Thierry Ndikumwenayo will fight for another top-three placing after winning in Alcobendas on 24 November and finishing second in Soria one week earlier. The 22-year-old trains with Italy’s Yemaneberhan Crippa under the guidance of Italian coach Massimo Pegoretti.

Morocco’s 1500m specialist Abdelati Iguider will test his shape over a longer distance with the aim to continue the proud Moroccan tradition in San Vittore Olona, which started with the wins of Khalid Skah in 1991 and Salah Hissou in 1999 and the runner-up finish by Soufian El Bakkali in 2017. Iguider won the bronze medal at the 2012 Olympic Games in London and at the 2015 World Championships in Beijing.

Another interesting entrant is Kenya’s Jackson Muema, who won the cross country race at the 2018 Youth Olympic Games.

Crippa will carry Italian hopes for a top-three placing after finishing fourth for the second consecutive year at the Campaccio Cross Country race on 6 January. During a successful 2019 season Crippa finished eighth in the 10,000m at the World Championships clocking 27:10.76 to break the national record. Last December he won European Cross Country bronze after winning the U20 race in 2014 and 2015 and finishing third in the U23 race in 2016 and 2017. Crippa trained for three weeks in Monte Gordo in Portugal in preparation for the Cinque Mulini and will be aiming to become the first Italian to reach the podium since Stefano Baldini in 2005.

The Italian line-up is completed by Yohanes Chiappinelli, the European 3000m steeplechase bronze medallist in 2018, Cesare Maestri, silver medallist at the 2019 World Mountain Running Championships and winner at last week’s Vallagarina Cross Country race in Rovereto, and Italian 5000m champion Marouan Razine, who finished sixth at the Campaccio this year.

Yavi will return to San Vittore Olona to defend the title she won last year in snowy conditions. The 20-year-old went on to finish fourth in the 3000m steeplechase at the World Championships after improving her lifetime best to 9:10.74 in Monaco.

The women’s race will be also highlighted by 20-year-old Kenyan Jackline Jerono, who won two recent cross country races in Allonnes and Le Mans, France, and Jasmijn Bakker from the Netherlands, who was fourth in the U23 race at last month’s European Championships.

Rising Italian middle distance star Nadia Battocletti will aim to continue her successful season after claiming her second European Cross Country U20 title and finishing sixth at the Campaccio. The daughter of former distance runner Giuliano Battocletti won the European U20 silver medal in the 5000m last year.

Other Italian runners in the field are world U20 mountain running champion Angela Mattevi and Valeria Roffino, who finished 11th at the European Cross Country Championships. 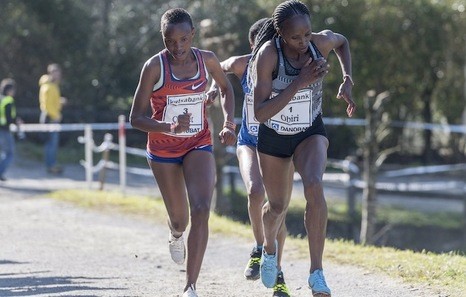 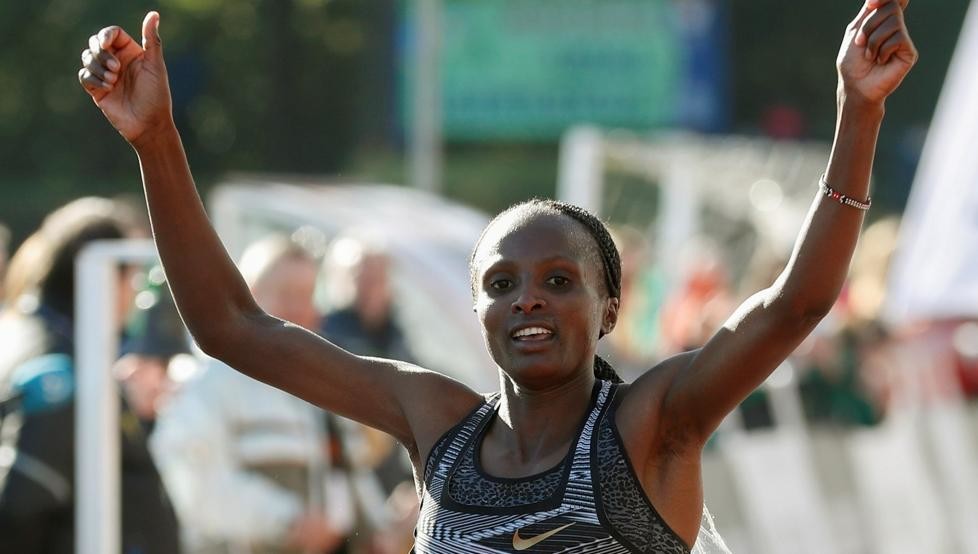