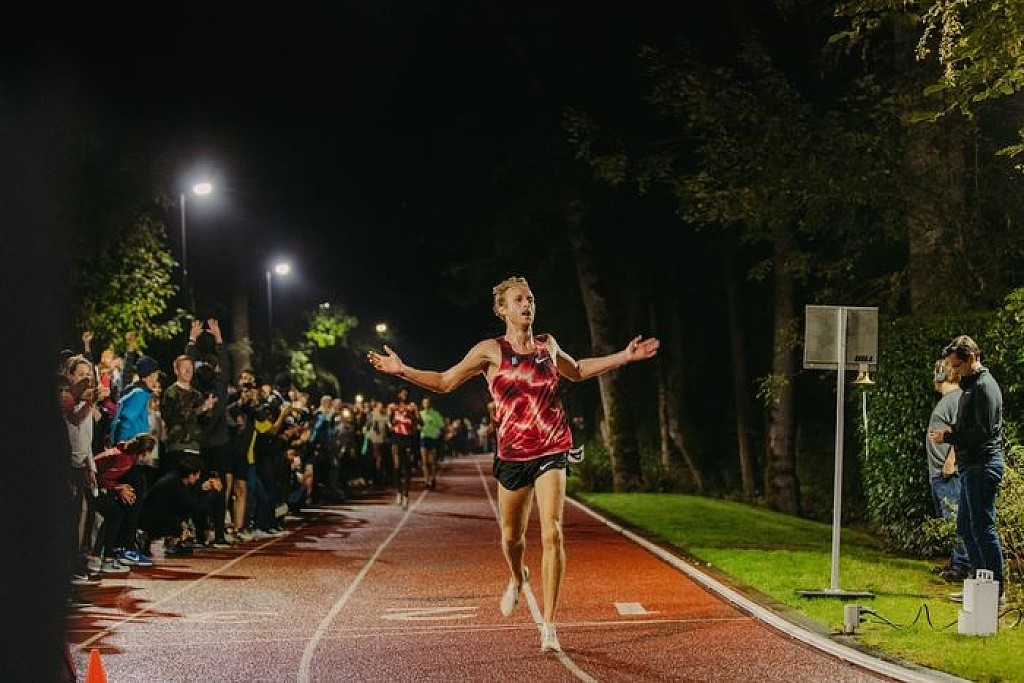 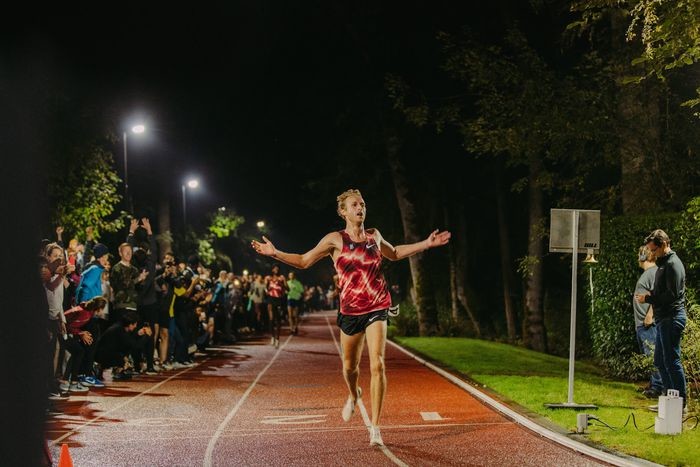 Woody Kincaid called the atmosphere Tuesday at Nike’s Michael Johnson Track “surreal,” and it was that.

With an estimated 2,500 spectators ringing the track on a cool, damp evening, the track partly in shadow, giant trees in the infield preventing an unobstructed view of the action, Kincaid, Lopez Lomong and Matthew Centrowitz got what they came for. 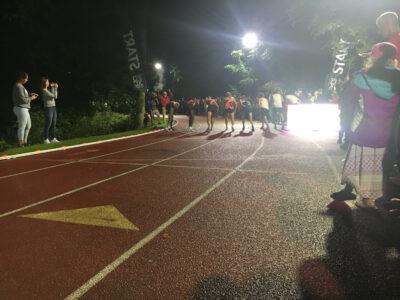 Canadian Olympian Mohammed Ahmed kept the pace well under the standard. Kincaid, Lomong and Centrowitz stayed with him.

Kincaid, who starred collegiately at the University of Portland, was having trouble processing it afterward. 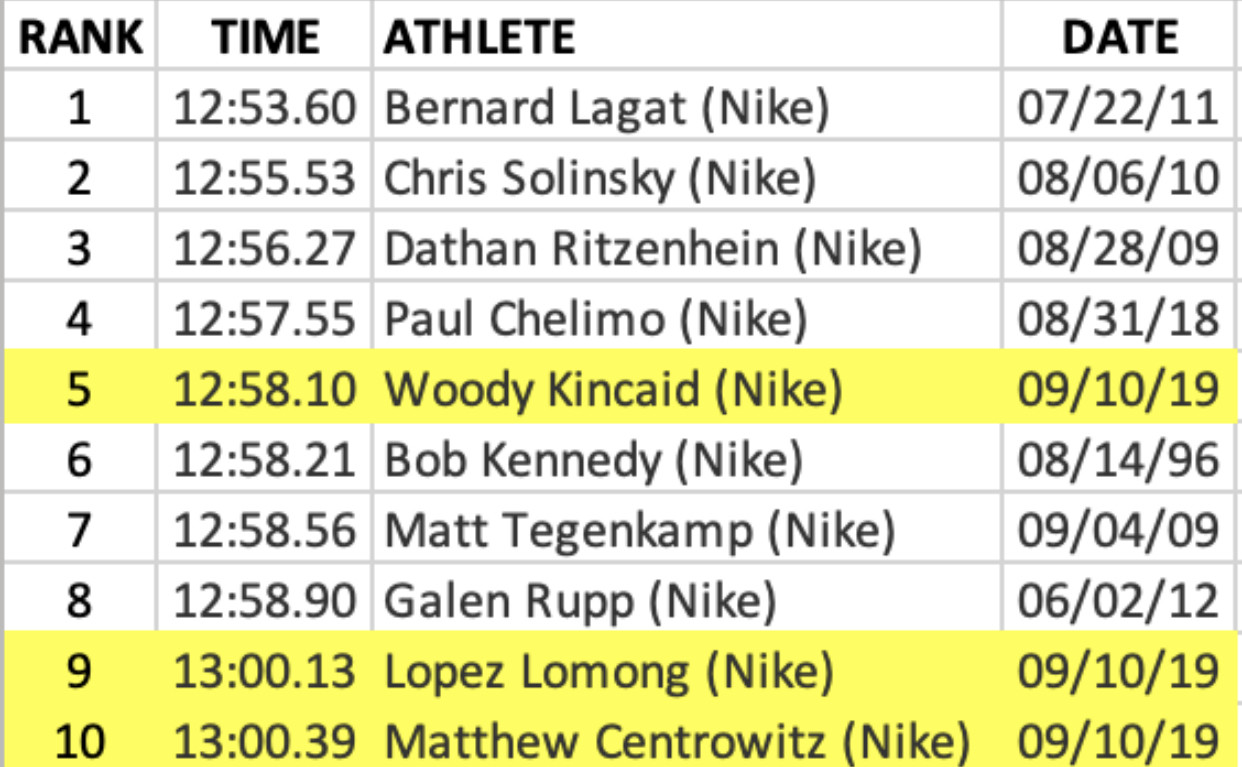 Of the three, Kincaid’s performance most stood out. Lomong is a two-time Olympian who swept the 5,000 and 10,000 at this summer’s USA Track & Field Outdoor Championships. Centrowitz is the reigning Olympic champ in the 1,500.

It won’t be a problem next year, now that Kincaid has taken care of his Olympic qualifier.

“If you watched the last mile of that race, I lost all form,” Kincaid said. “I lost everything. It was just one step after another. There was nothing left in the tank after that.”

He said the spectators, standing around the track in lane five, in some places three and four deep, pushed him. 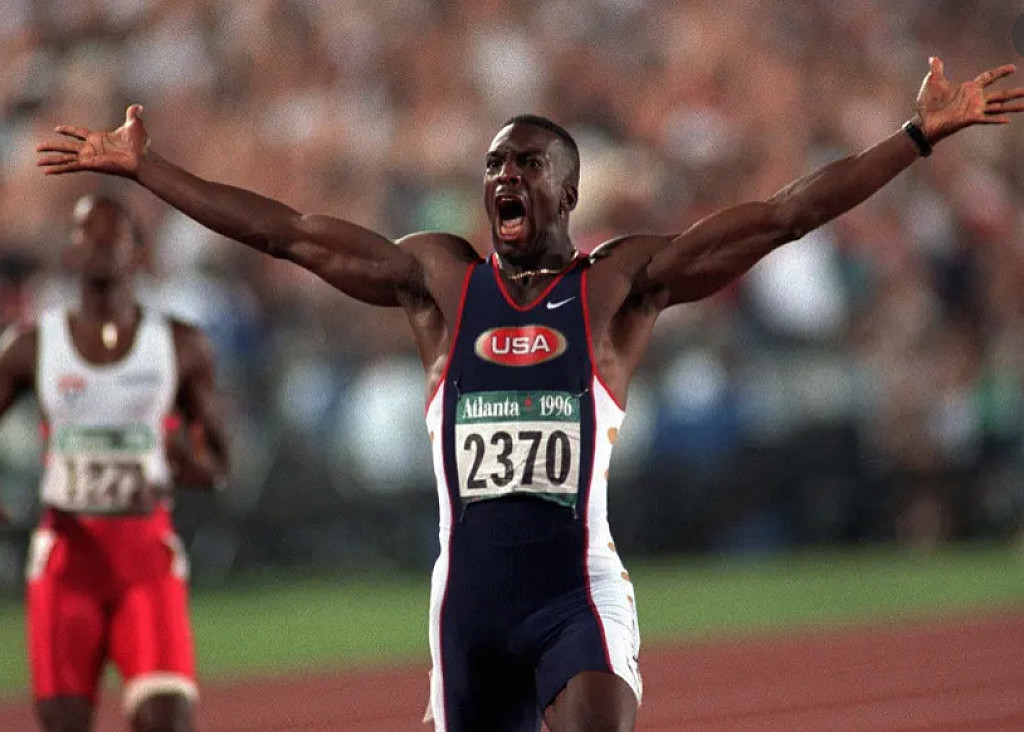 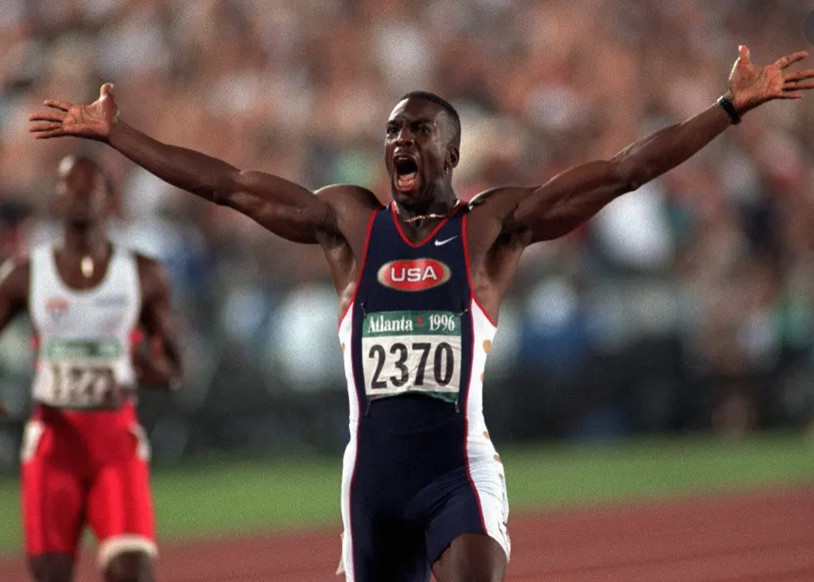 Michael Johnson is recalling the unusual physical sensations – involuntary movement of his left foot, numbness, “a sort of tingling sensation” in his left arm – that came over him moments after finishing his daily workout in his home gym in August last year. “I hobbled over to my weights bench and thought, am I having a cramp or something? I called my wife Armine over and said: ‘Hey, something feels weird. Something doesn’t feel right.’”

The cause wasn’t a cramp, though, overexertion or an infection. The legendary athlete – a four-time Olympic sprint champion, just 50 years old at the time – was having a stroke. As he tweeted soon after: “It seems these things can affect anyone, even the once-fastest man in the world!”

The confusion he felt was fairly typical, he points out now, eight months later. Many stroke victims do not realize at first that they are experiencing an event that could leave them dead or seriously disabled, potentially for life. 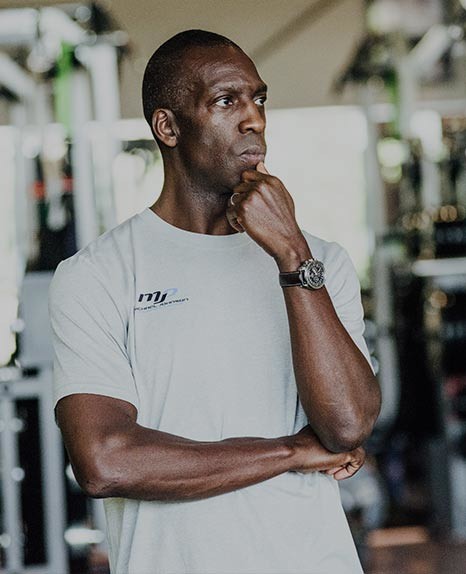 After half an hour spent wondering what to do, Johnson decided to go to hospital. Armine drove him to the Emergency Room at UCLA Medical Center in Santa Monica. It was a wise call. A CT scan, then an MRI confirmed the ER doctor’s diagnosis of a stroke.

Initially, Johnson was angry; angry that someone as determinedly clean-living as himself, with no obvious risk factors – he didn’t smoke, ate healthily, kept fit and had no family history of cardiovascular disease – had suffered a stroke. “I did feel like: ‘Why did this happen to me, when I was doing all the right things?’” But within 24 hours he had gained a different perspective. “It’s natural for anyone to go through that period of anger. I was pretty fortunate to get past that situation [the stroke], with an opportunity to completely recover, which is what I hoped to do.”

Johnson decided to put the same determination that he had brought to his athletics career into recovering from his stroke.

It was an arduous process, both physically and mentally. The first stage of his recovery involved a physiotherapist helping him to learn to walk again using a walking frame.

How did a legendary athlete, a champion, deal with being so helpless? “I think about looking at myself in the mirror, struggling to hold a balance position for more than 10 seconds or struggling to coordinate my body when I used to be one of the best athletes in the world.”

He learned – impressively quickly – to walk, then to walk in a balanced way, and then to be mobile, and then to get up and down stairs. Then he succeeded in eliminating his limp, although that took a month. Then he began working on regaining his strength, power and fine motor skills on his left side. He drew on a key lesson of his path to sporting glory: often progress comes in small, incremental steps. In one of his early progress reports, he tweeted that, while his recovery was going well, relearning the very basics of movement was “gruelling.” But by December he said, “I was almost back to what I would consider my normal. And now, eight months on, I’m 100% recovered.” 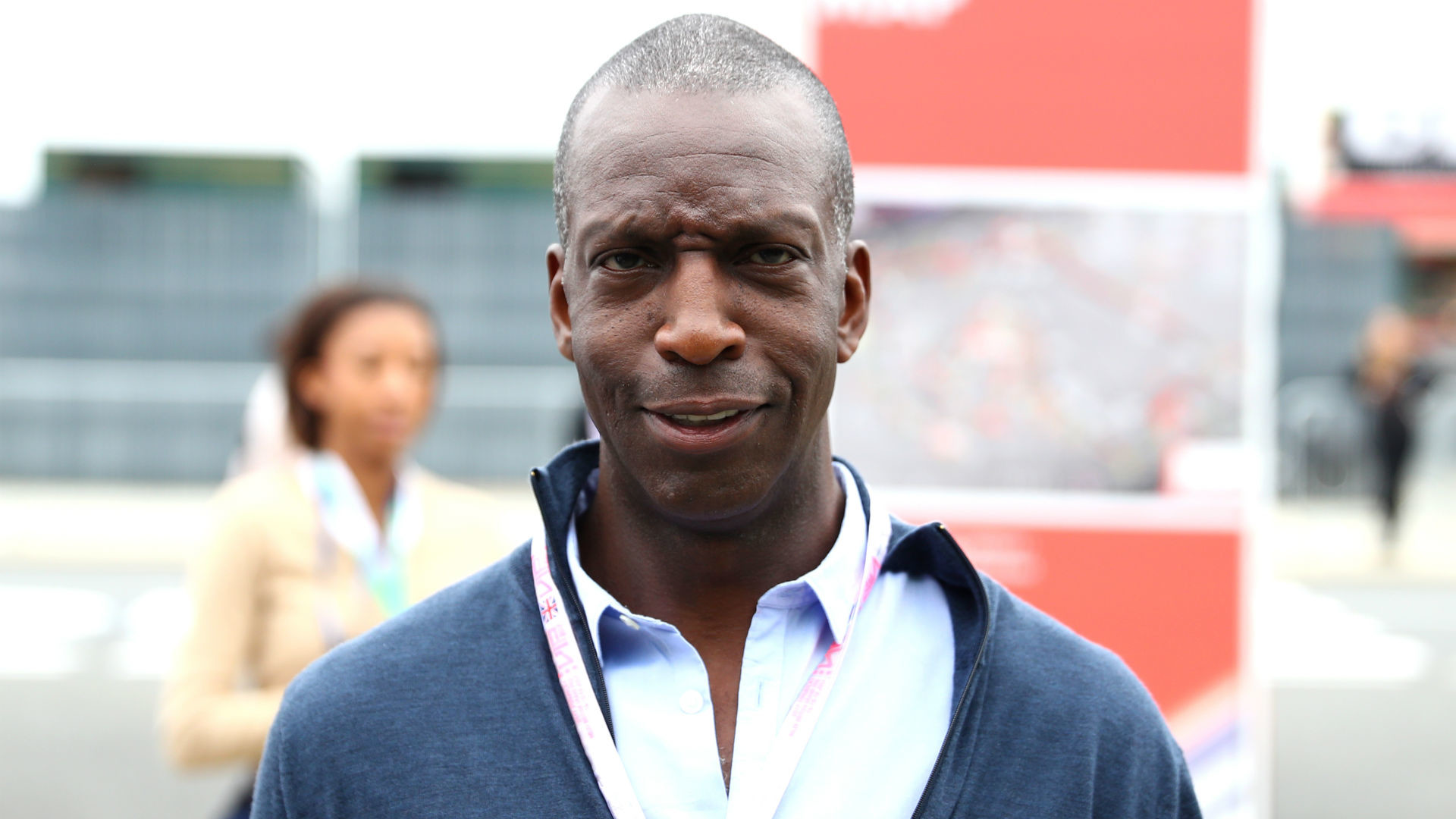 Going to the ER might have saved him from a future of dependence and life in a wheelchair.

His advice on how to minimise the danger of stroke is what any doctor or nurse would say. “Be your own case manager. Understand your own health, understand the risk factors and understand how you can take control and minimise the risk. Stop smoking if you are a smoker. Being overweight increases your risk so keep your weight down. Eat a balanced, nutritious diet. Stay active.”

Johnson now takes aspirin, a statin, a blood-thinner and a drug to keep his blood pressure in healthy range. He is is acutely aware that, having had one stroke, he could easily have another. After eight months and a host of medical tests, neither he nor his doctors know what caused his stroke – 30% of strokes have no obvious cause, he explains. Is that frustrating? “No. I mean, I can’t force an answer where there isn’t one. All I can do is do what I do, so I’m OK with that. I kind of have to be.” 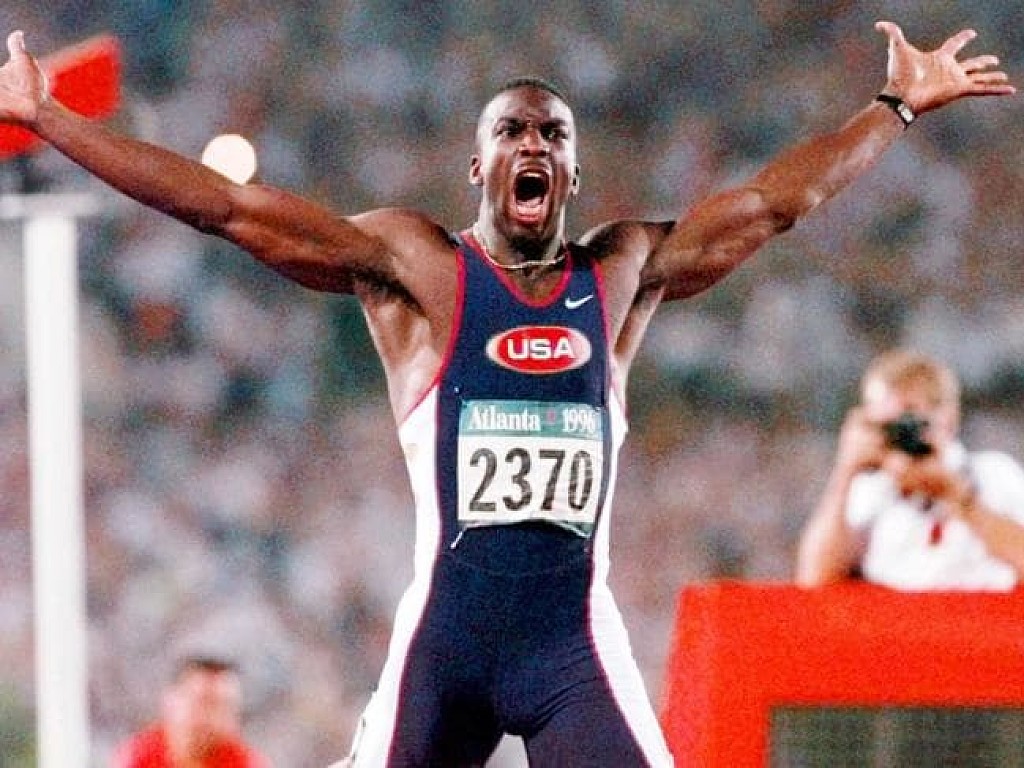 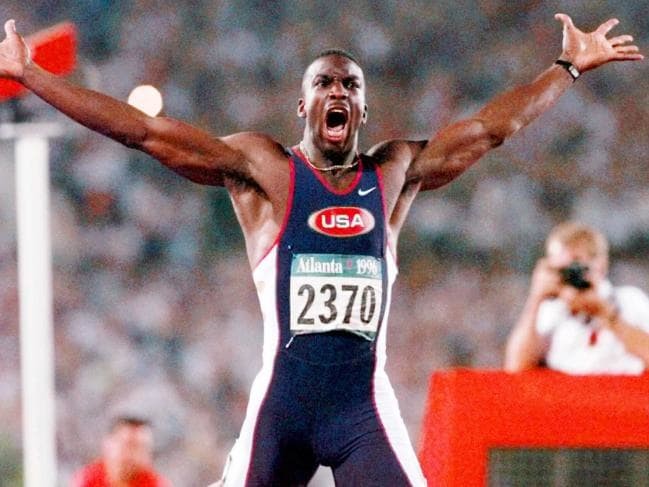 Michael Johnson has spoken of his anger after discovering he had suffered a stroke but insists an Olympic mindset will enable him to make a full recovery. The 51-year-old former Olympic sprint champion says he is “pretty much back to normal” after suffering a transient ischemic attack in September. Johnson, once the fastest man on the planet over 200m and 400m, said he had finished a training session at home when he felt “a strange tingling down my arm and left side”. He “decided not to take any chances” and headed straight to hospital. “After the MRI scan, I almost fell off the table. I could not walk or move my left leg,” he told the BBC. “The numbness of my arm was intense too. I could not feel my arm and moving my fingers was problematic. It was a lot of emotions. Once I was told I had suffered a stroke and I could not walk things get immediately real. “You start to think: ‘What is my life going to be like going forward? What is my quality of life going to be like? Will I be able to dress myself? Will I be able to take care of myself or will my loved ones have to take care of me?’ “I had a great team of doctors and they said that is what all stroke victims ask but unfortunately there is no answer to the questions – only time will tell. Some people make a full recovery, some make a partial recovery and how much time that takes there is no answer. That is difficult to hear and pretty scary. He added: “Doctors said the best chance of recovery was to immediately get into physical therapy. I did that two days after the stroke and I got out of bed with assistance and got behind the walker around the hospital - and ironically it was around 200m. I timed it and it took me around 15 minutes to cover that distance. (11/24/2018) ⚡AMP 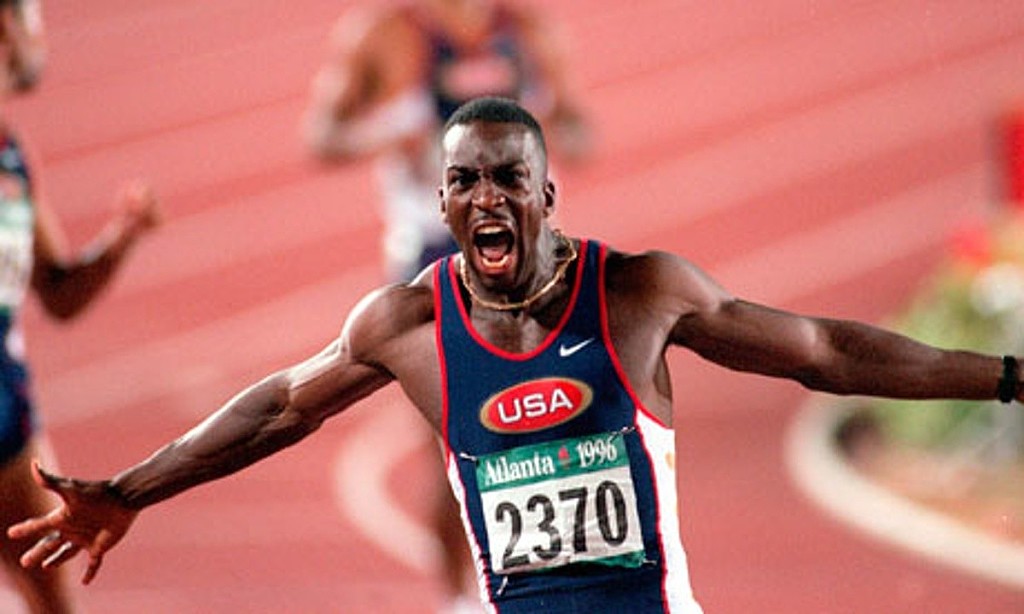 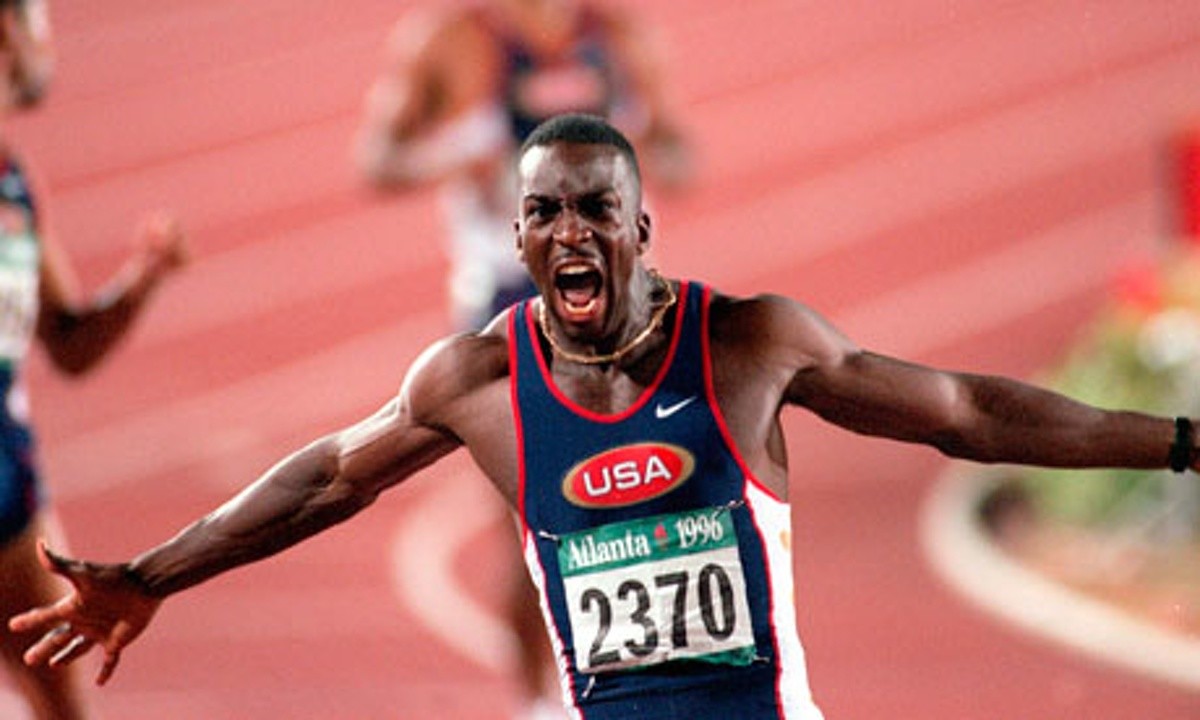 Michael Johnson Expected to make a full recovery, from a mini-stroke

American sprinter 50-year-old Michael Johnson, who once billed himself the “world’s fastest man” revealed that he was recovering at home this week after suffering a transient ischemic attack (TIA), or mini-stroke. Heart issues have apparently been ruled out, and Johnson is expected to make a full recovery. And he referred to himself, once again, as a former “world’s fastest man” in his announcement, as reported by Britain’s Daily Telegraph: “It seems these things can affect anyone, even the once fastest man in the world!” A TIA is a temporary blockage of blood flow to the brain. It does not cause permanent damage, but it may be an indication that a stroke is imminent. Johnson won 12 world and Olympic gold medals for the U.S. over his career, and was the first to win both the 200m and the 400m at the same Olympics. He was the world 200m record-holder when, in 1997, a 150m race was arranged between him and Canada’s Donovan Bailey in Toronto’s SkyDome to settle the matter of the “world’s fastest man.” Bailey had run the fastest-ever 100m at the Atlanta Olympics in 1996, and had become a world champion in 1995. (09/10/2018) ⚡AMP