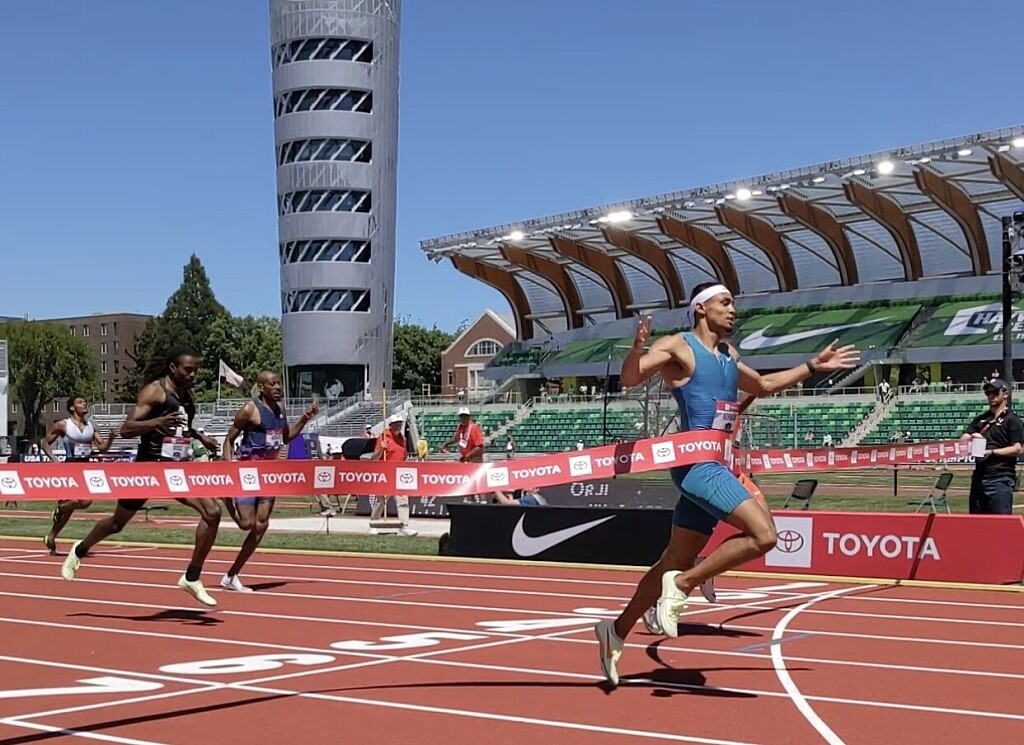 There has already been a lot of a action during the 2022 USATF Championships in Eugene Oregon.  Sydney McLaughlin set a new world record in the 400m hurdles (Second photo).  Michael Norman won the 400m (first photo) and Fred Kerley won the 100m (third photo). Photos  by Jivko 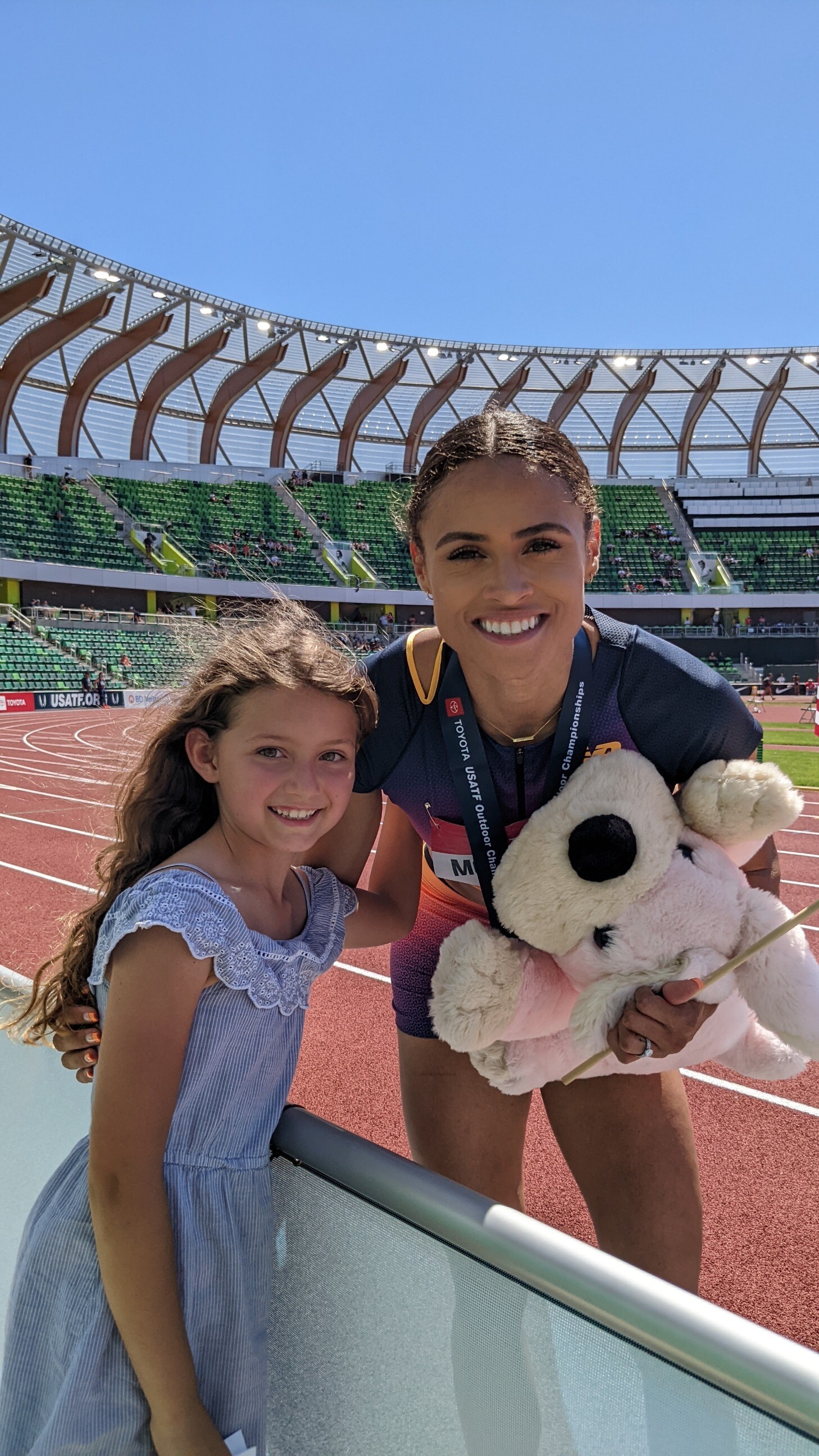 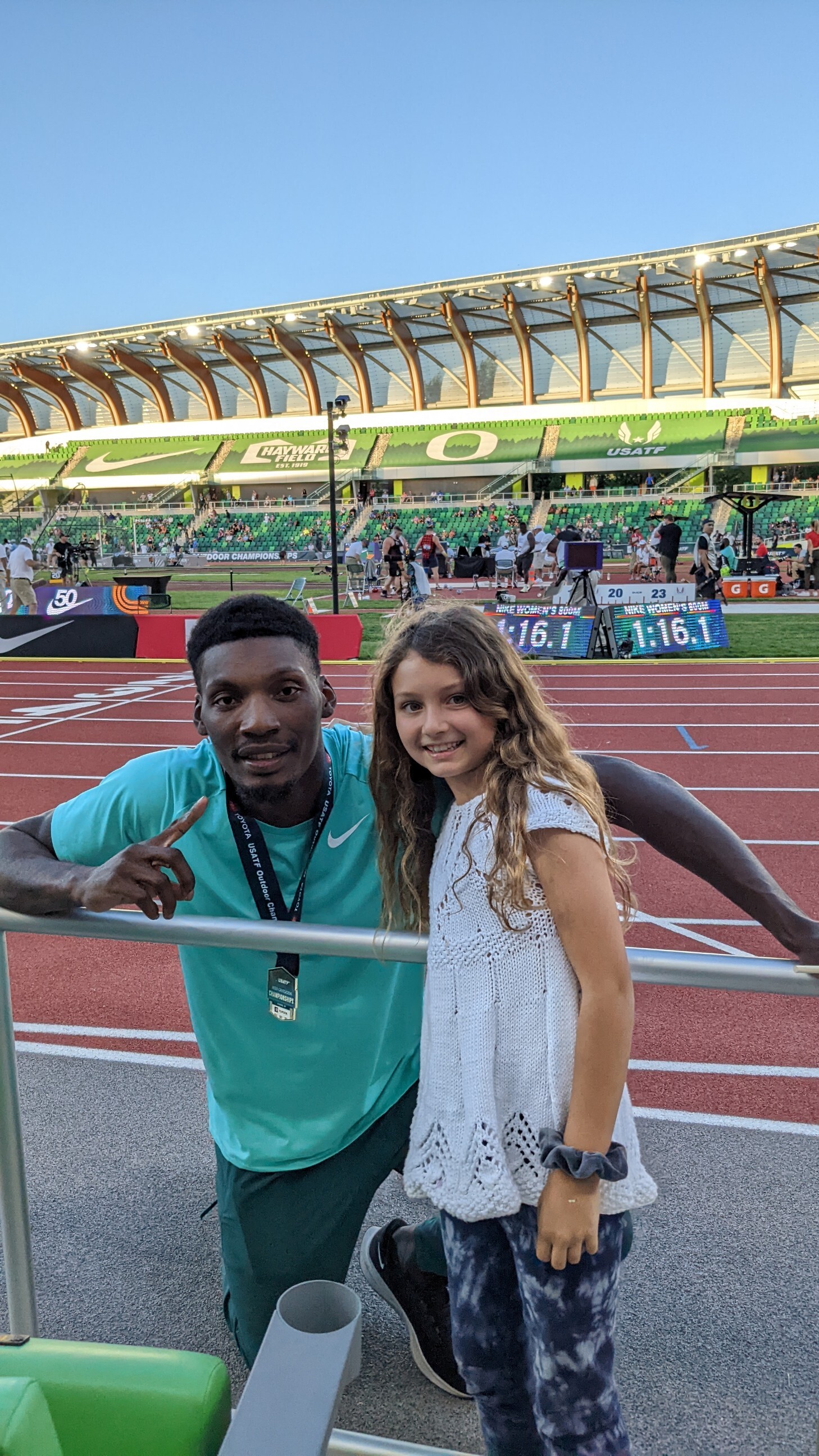 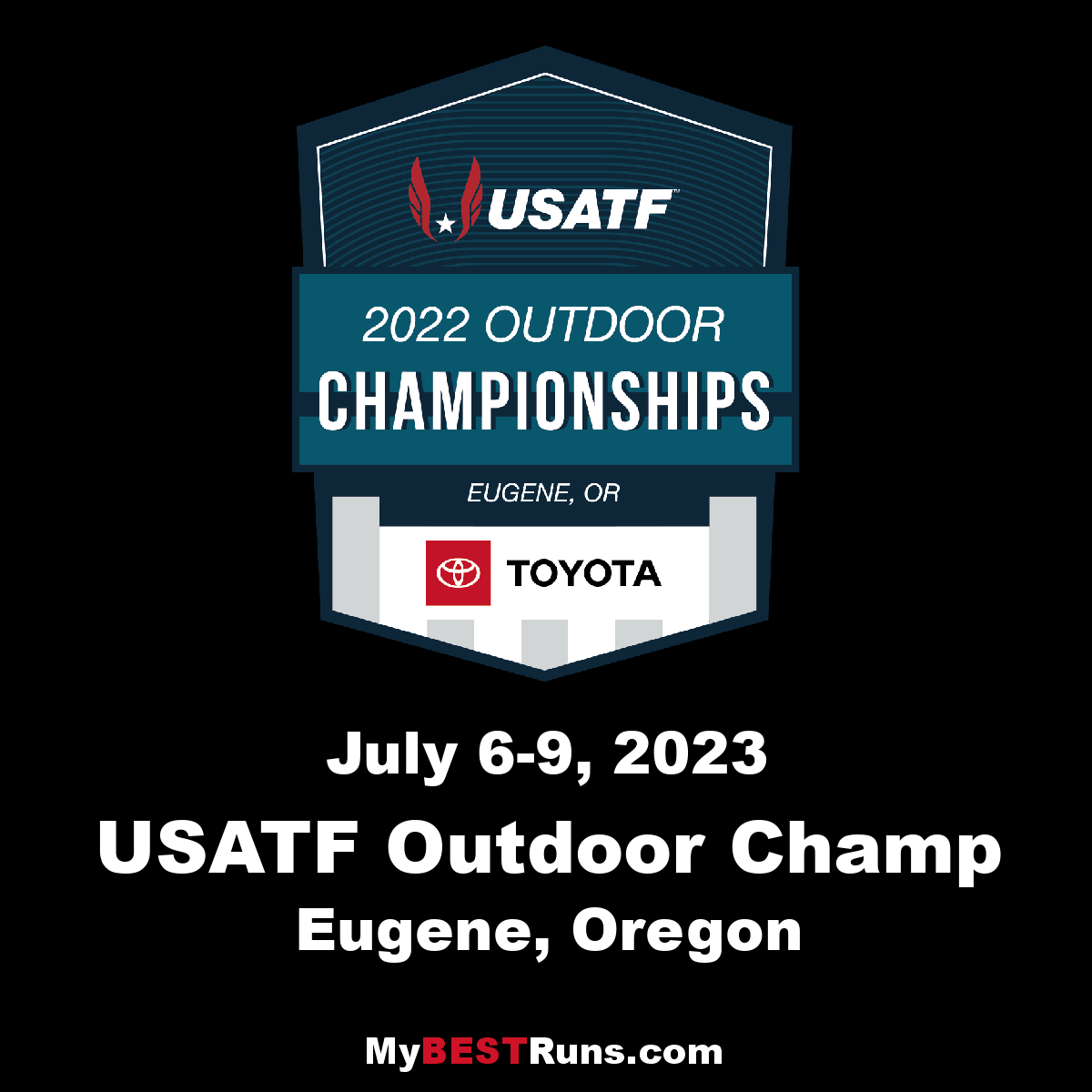 The Nation’s best will leave it all on the track June 23-26 as they compete for a spot on the world’s best track and field team. The meet will be held at Hayward Field at the University of Oregon. This will be the tenth time that the U.S. championship meet will be staged in TrackTown USA. The meet will also... 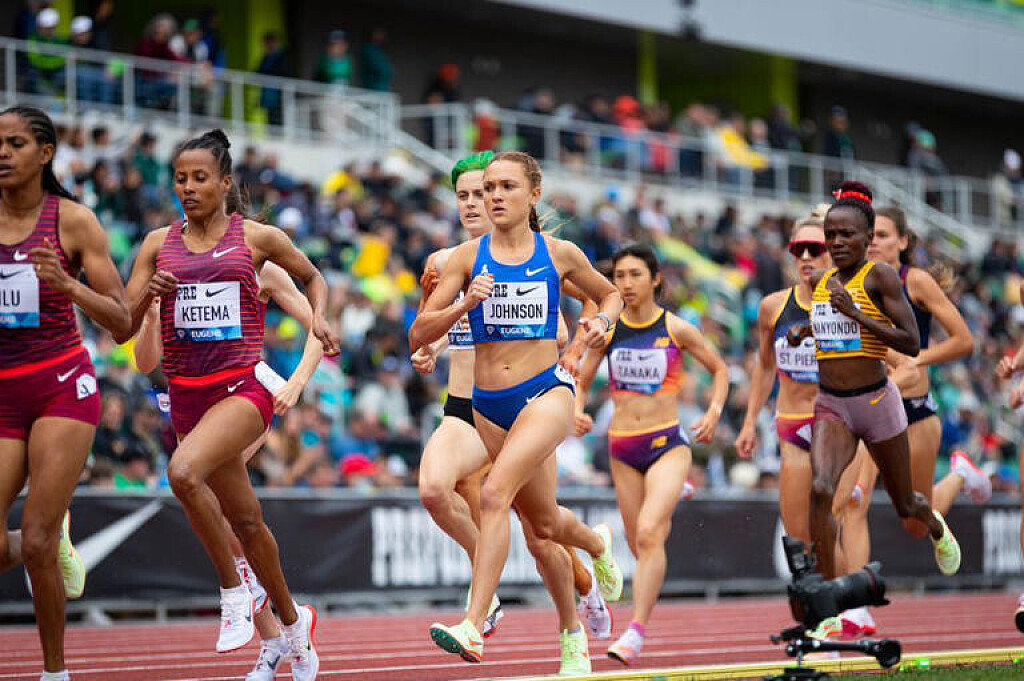 As Sinclaire Johnson made her way to the starting line for the women’s 1,500 meters at the Prefontaine Classic last month in Eugene, she took a moment to take in her competitors.

Eight of them ran in the 1,500 final at the Summer Olympics in Tokyo last year. Now, she had the opportunity to show she belongs among them. 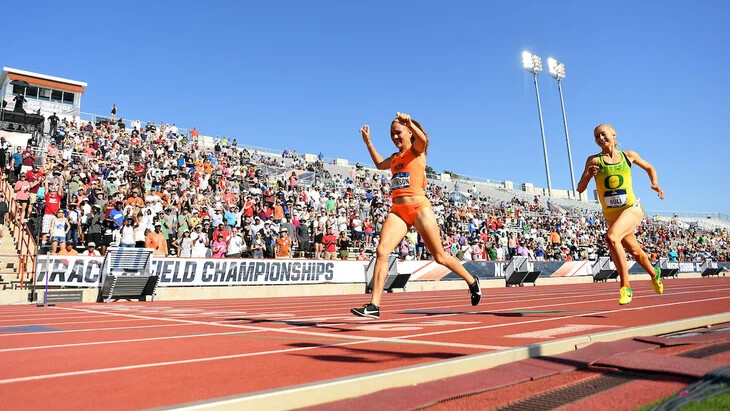 No thoughts about Johnson’s final time crossed her mind throughout the race. They never do. She’s too focused on her pace and beating those around her, and she rode that mindset to a fourth-place finish, beating six of those Tokyo Olympians.

“I felt like I had finally stepped into that pool of competing on that world-class level,” Johnson said this week.

Running a sub four-minute race was always Johnson’s goal heading into the meet. When she had the time to think about her official time, she saw it read 3 minutes, 58.85 seconds, a new personal record. It’s a far cry from where she was nine months ago, when she could train only in pools or the gym while dreaming of getting back to running.

Johnson joined Bowerman Track Club following her college career at Oklahoma State University, where she won a national title in the 1,500 as a junior in 2019. She made the switch to coach Pete Julian’s Portland-based Union Athletics Club last August.

That’s when the pain started. 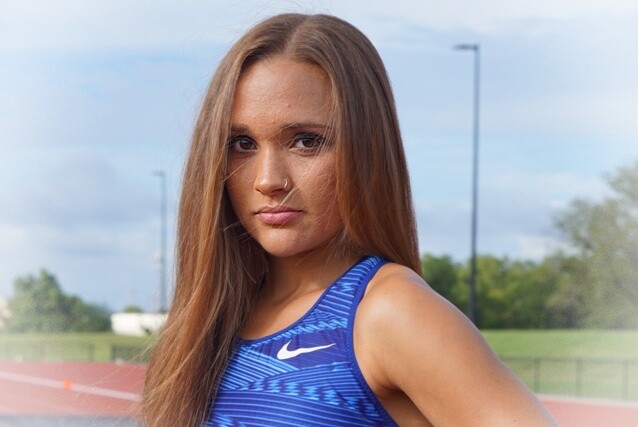 It began as persistent pain in her hip following a workout early in the week. She couldn’t walk by Saturday, and an ensuing MRI showed a small tear in her labrum. Such tears typically can be corrected only through surgery, but this tear was small enough to not require an operation.

Johnson resumed training with caution, but she was still in pain that wasn’t getting better. Another MRI a month later showed something new: a stress fracture. So Johnson’s time with Union Athletics Club began in earnest while she was in recovery.

Running wasn’t an option, so Johnson instead spent time in the gym strengthening the muscles surrounding her hip and pool exercises to reduce the stress on her body. The process of getting Johnson back into competitive shape was slow and cautious, Julian said, but she was finally able to start running again in November.

“Every week just kept getting better and better,” Johnson said. “I just kept shocking myself with what I could do.”

Julian and Dave McHenry, Union Athletics Club’s strength coach, were with her every step of the way, Johnson said. This included daily check-ins on Johnson’s physical and mental health, scheduling appointments with doctors and breaking down how to get her back to training.

When it wasn’t her coaches reaching out with support, it was her new teammates. Jessica Hull, a former track athlete at the University of Oregon, met Johnson as a competitor when the two were running in college.

Hull was right behind Johnson when the latter won the NCAA title in 2019. It was a flip of the preliminary round earlier that day, when Hull took first and Johnson claimed second.

“We both knew at that point, we couldn’t have done it without each other, pushing each other,” Hull said.

Not only has Hull been training alongside Johnson at Union Athletics Club, she was also one of the eight Olympians running with her at the Prefontaine Classic. The two aren’t competitive with each other now that they’re on a team, Hull said.

“Watching her race at USA is gonna feel like my heart is out there with her,” said Hull, who competes for Australia.

Messages from coaches and teammates were important, but Johnson’s ultimate confidence boost came from herself. Slowly, but surely, she worked through the outdoor season to go from hanging on in races to competing to win.

That top-four finish in the Prefontaine Classic against some of the same competition she’ll see in the 1,500 this week proved to Johnson that she can earn a spot on Team USA for the World Athletics Championships next month.

“Not only do I want to make a team,” Johnson said, “I believe that I can make a team.”

The Nation’s best will leave it all on the track June 23-26 as they compete for a spot on the world’s best track and field team. The meet will be held at Hayward Field at the University of Oregon. This will be the tenth time that the U.S. championship meet will be staged in TrackTown USA. The meet will also... 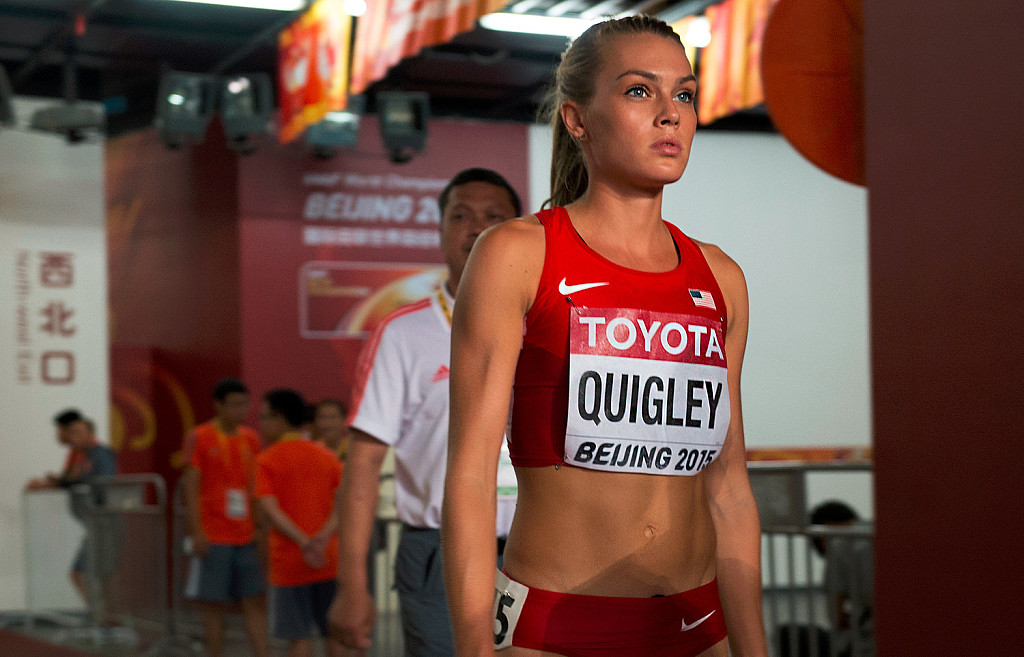 2016 Olympic steeplechaser Colleen Quigley announced that she was leaving Bowerman Track Club, and has finally revealed that she will be training under former FSU coach, Josh Seitz

In a turn of events that surprised many in the running community, American Olympian Colleen Quigley announced on February 4 that she is leaving the Bowerman Track Club, where she’s trained for the last five years.

The 28-year-old, who competed in the 3,000m steeplechase at the 2016 Olympics in Rio, will now be coached by Josh Seitz, who worked with her when she attended Florida State University (FSU). 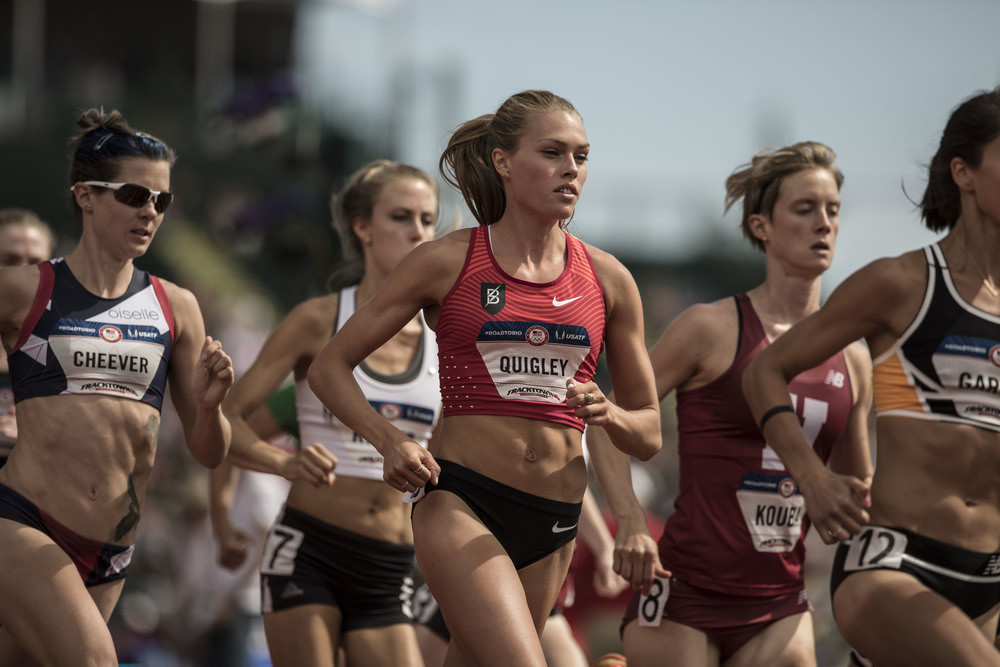 She announced that she would be leaving the BTC on her Instagram page. In a heartfelt post, she spoke about helping her coach, Jerry Schumacher, recruit more women to the team, which, at the time Quigley joined, consisted only of three other women, including Shalane Flanagan, Emily Infeld and Sammy Silva. Since then, the BTC women’s squad (affectionately named the ‘Bowerman Babes’) has grown into one of the most dominant groups of female distance runners in the country. 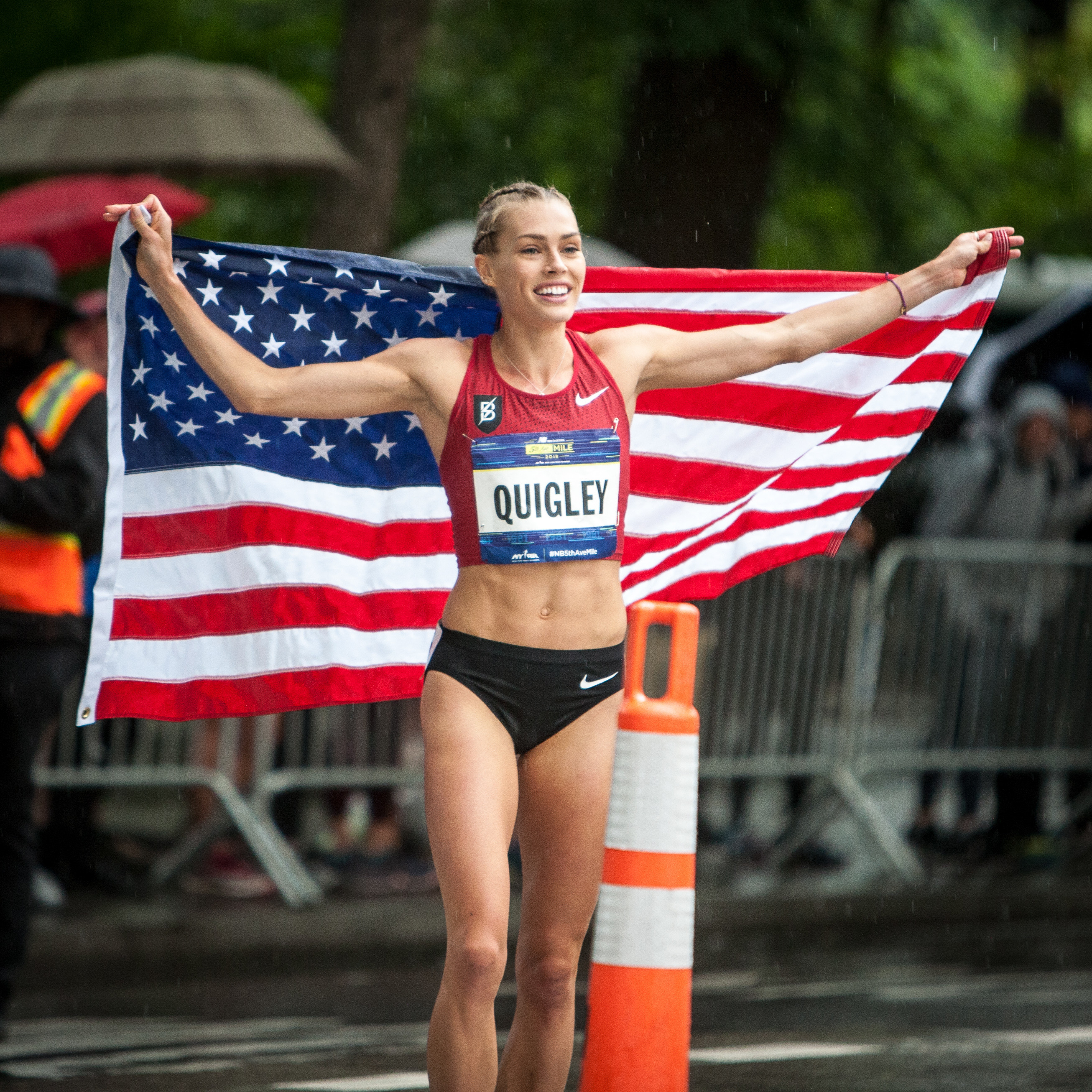 Quigley also wrote an ‘Open Letter to the BTC’ on her website, in which she described what the team has meant to her over the last several years, and gave special shout-outs to many of her teammates and coaches.

"BTC, you were the perfect place  for a young athlete fresh out of college to land,” she wrote. “If going pro had meant training alone at age 22, I don’t think I ever would have made it. You gave me teammates and coaches who supported me and my goals.”

In an Instagram Live on Thursday, Quigley finally announced that her new coach would be Seitz, who is currently the assistant cross country and distance coach at Portland State University, where he has been coaching since 2017. According to his Portland State profile, in his four years on staff, he has helped a few steeplechase athletes set school records, and has led one steeplechaser to two podium finishes at the Big Sky Outdoor Championships.

Quigley´s teammate Kate Grace also announced that she would be leaving the BTC and will be heading to Colorado to train with Emma Coburn on Team Bosshard. There have been several changes to the Bowerman Track Club over the last year, with Gabriela Debues-Stafford, Sinclaire Johnson and Amos Bartelsmeyer joining the squad, and Ryan Hill, Andrew Bumbalough, Grace and Quigley leaving. Quigley has not yet announced any new sponsorship deals.