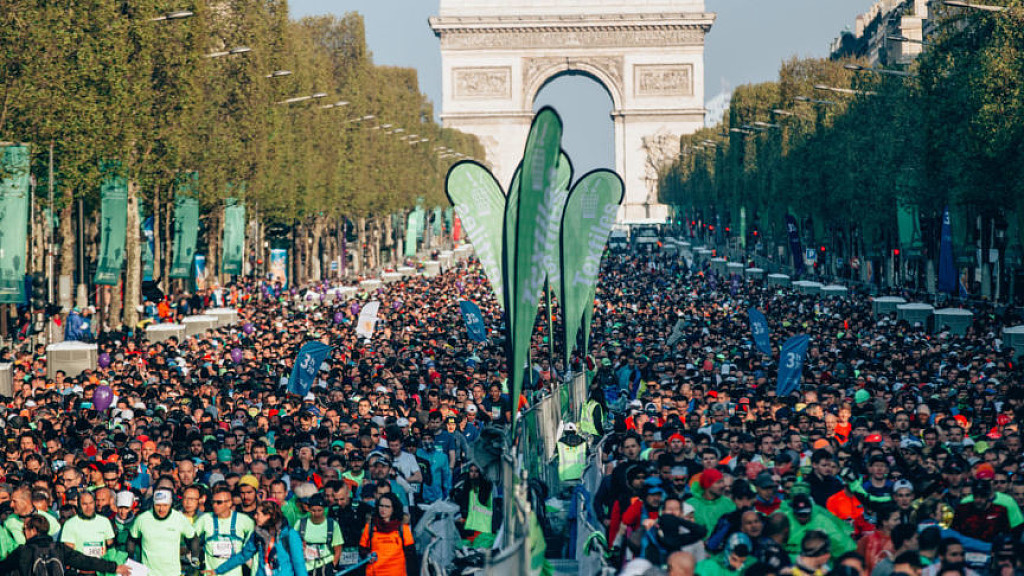 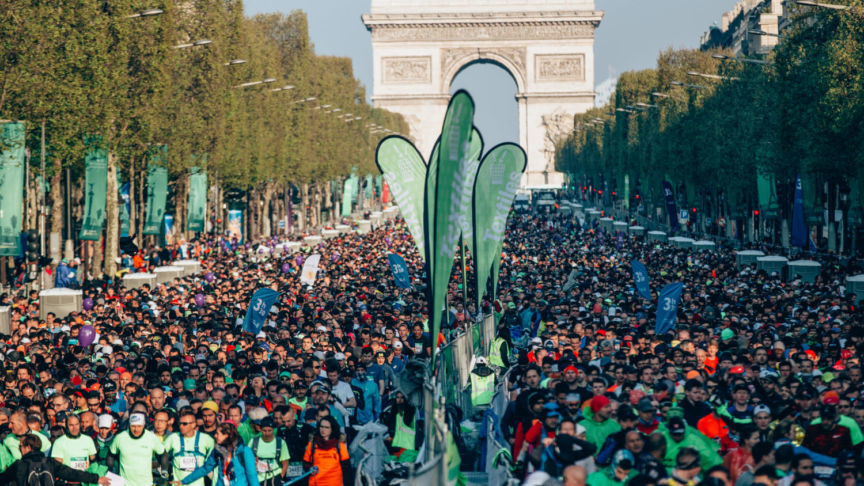 New initiatives include the Schneider Electric Green Runners community. Just a few days before Climate Day held in France on Sunday 8 December, several marathon stakeholders came together in Paris to raise awareness about initiatives that can help to protect the environment. The event organising team notes that running plays a key role in these efforts…

More and more runners are going out plogging together. It is all about running and, even more importantly, picking up litter along the way. The 2020 Schneider Electric Paris Marathon organised its first plogging event, overseen by Run Eco Team, an organisation that has the support of Facebook founder Mark Zuckerberg. It was a fun moment in the streets of Paris that demonstrated the organisation’s motto “Running for a cleaner world”. 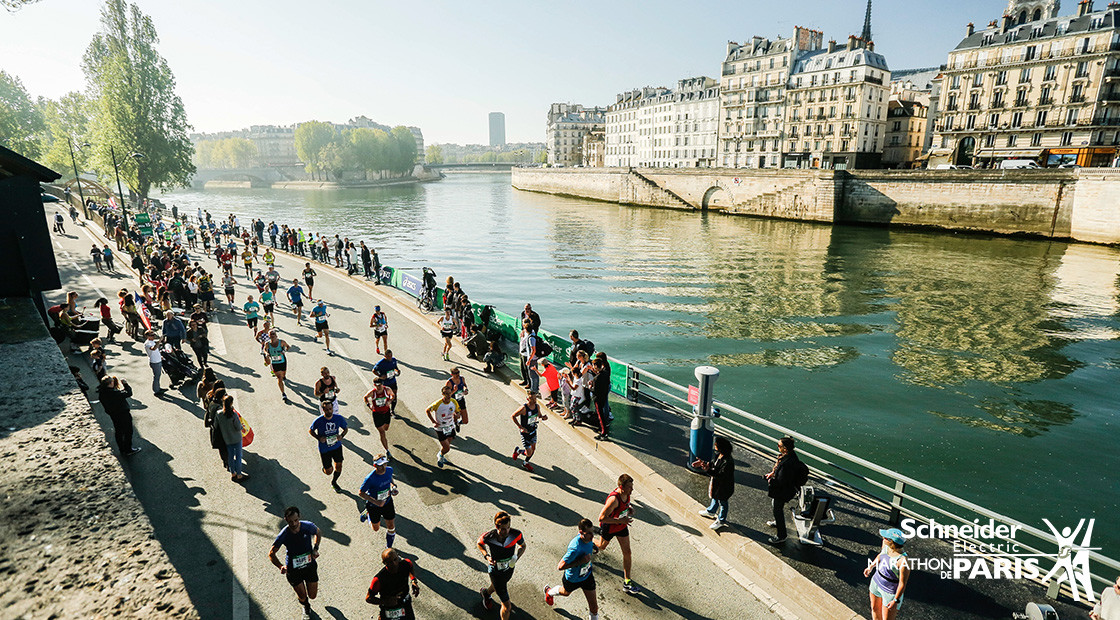 Nutrition, a key element in the preparation of runners, fits in perfectly with this lifestyle if it is based on responsible consumption, local, seasonal products and a zero-waste approach. The same applies to the Do-It-Yourself (DIY) concept, which means making one’s own washing powder, maintenance products and cosmetics. 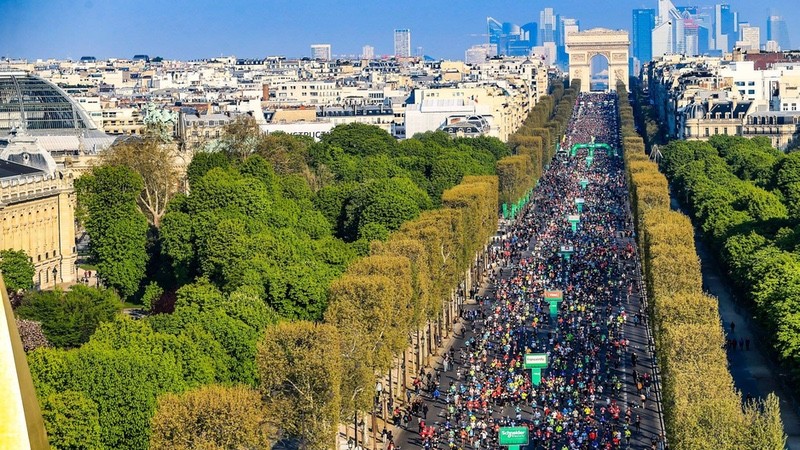 Recycling and making the right choice on mobility by choosing more fuel-efficient means of transport (public transportation, bicycles, carpooling, etc.) whenever possible are other ways of doing one’s bit for the planet every day.

The Schneider Electric Paris Marathon team adds that the even is replicating these individual actions on a larger scale. Achieving carbon neutrality, reducing waste at the event (-30% over 3 years), recycling waste (67% vs 39% earlier), collecting and recycling clothes at the start (4.3 tonnes in 2019) and donating food that has not been handed out at refreshment stations to the Restos du Cœur and Chainon Manquant non-profit associations are just a few examples.

The 2020 Schneider Electric Paris Marathon wants to raise awareness about lifestyle changes among runners. The marathon organisers are encouraging people to join The Schneider Electric Green Runners community and take up weekly challenges to reduce carbon footprint. Each time #SEgreenrunners is used on social media, Schneider Electric, with the help of NGO partners, will plant mangrove trees. 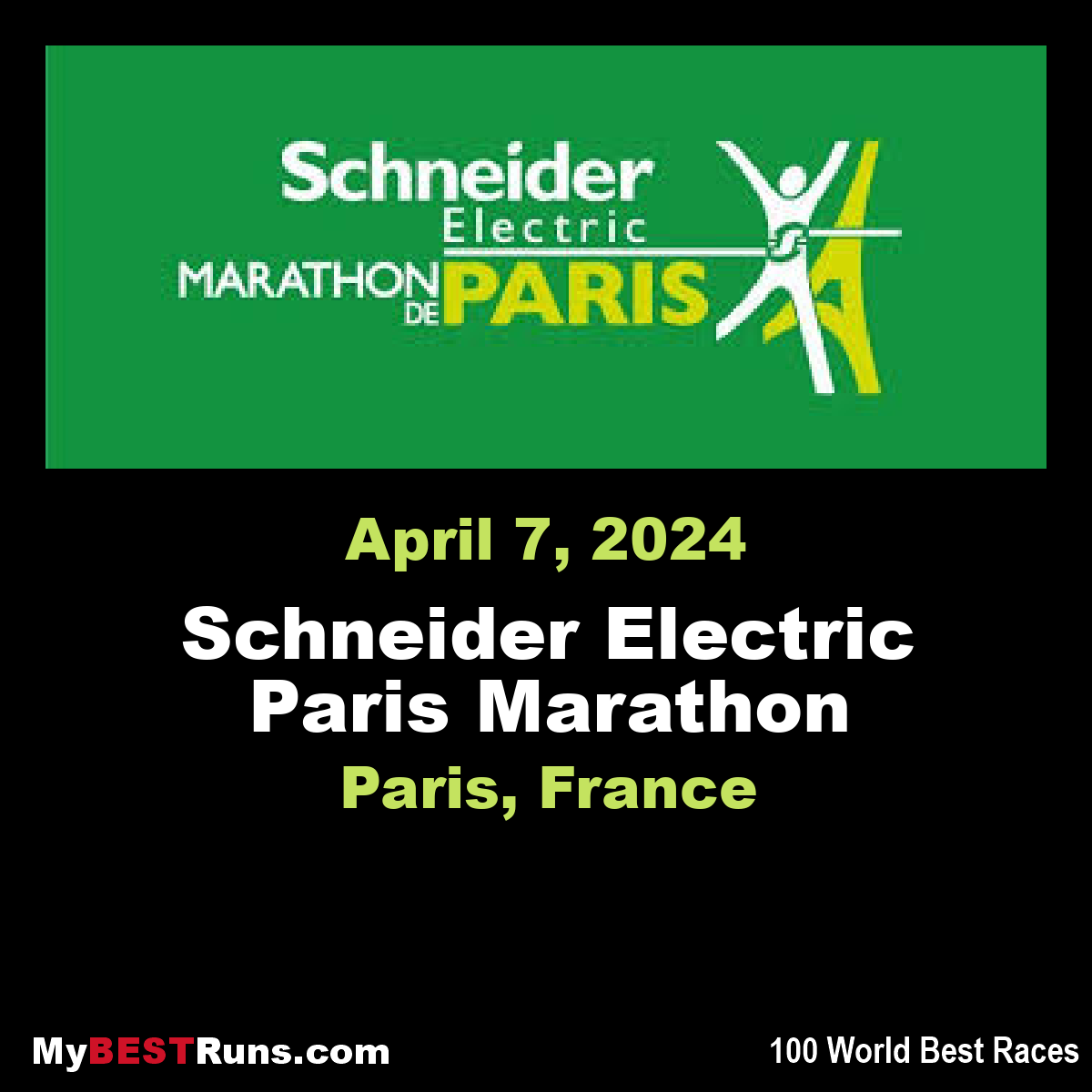 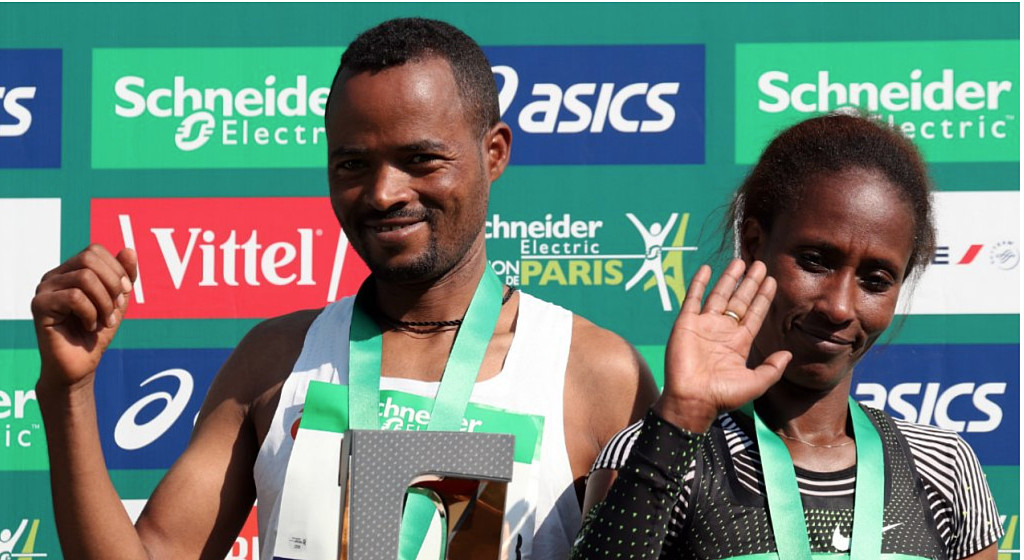 Ethiopian’s Gelete Burka (women’s race) and Abrha Milaw (men’s race) won the 43rd edition of the Paris Marathon on Sunday, leading a record 60,000 participants to the finish line through the French capital. 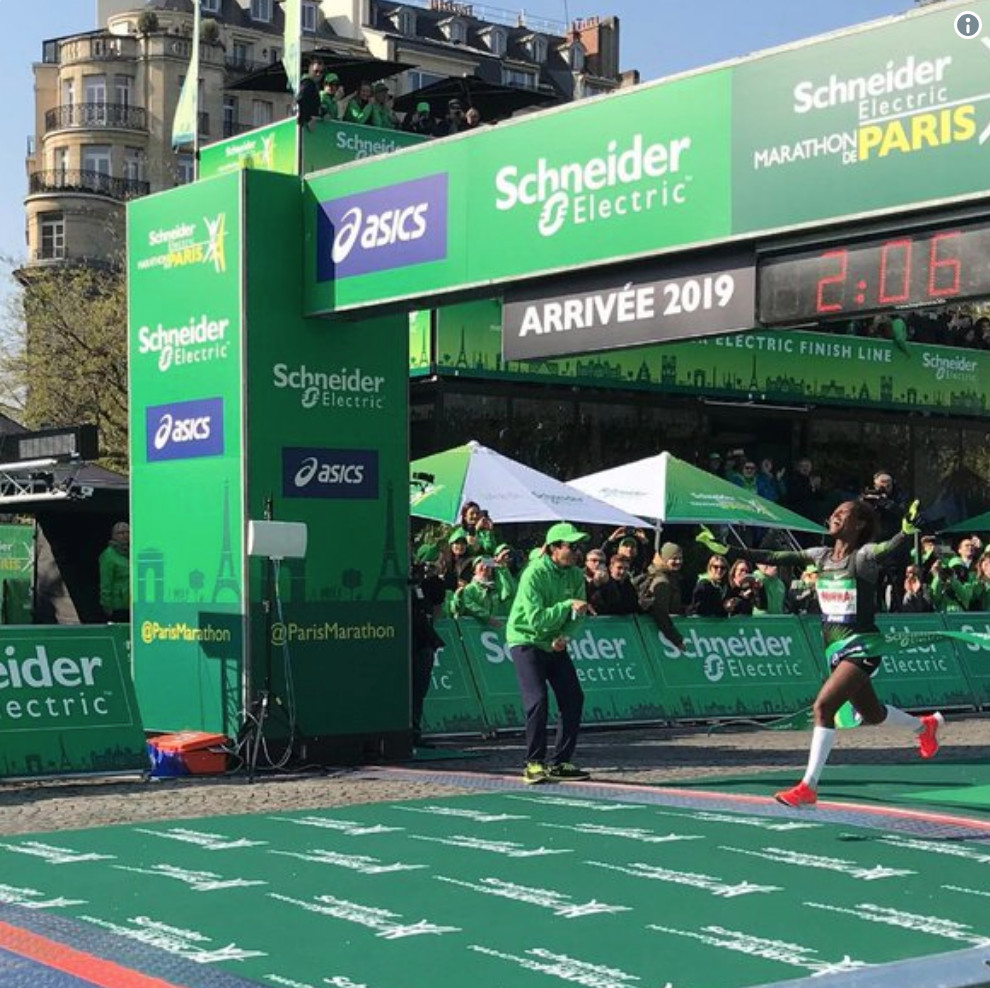 Runners from around the world set off from the Champs-Élysées at 8am on a cold (2°C) and cloudless Sunday morning in Paris. This year’s course ran east through the French capital to the Bois de Vincennes, around that vast forested park, and then west again through the heart of the city, along the Seine on the Right Bank, past the Louvre and the Eiffel Tower, and through the Bois de Boulogne. Two landmarks, the Opéra Garnier and the Place Vendôme, were added to the 2019 route.

Women made up a record 27 percent of those signed up for the 2019 race. 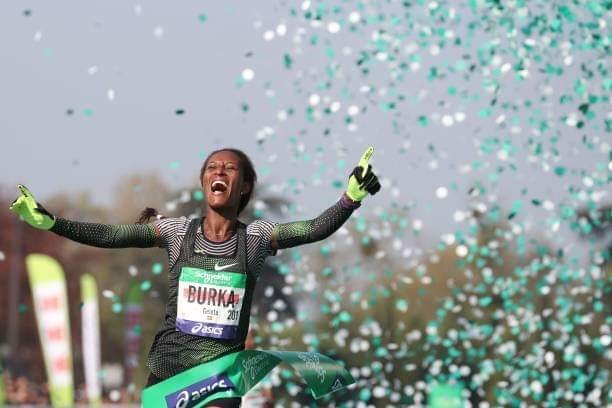 Among the elite women running, one athlete won a late battle to take part. France’s Clémence Calvin, the European marathon silver medallist, was provisionally suspended by the French anti-doping agency (AFLD) on Wednesday for allegedly obstructing a doping test in Morocco last month. The 28-year-old has denied the allegations. France’s top administrative court, the Council of State, issued an emergency ruling late on Friday that lifted her provisional ban.

Calvin crossed the finish line in fourth place on Sunday with a time of 2:23:41 to set a new French record for the distance, pending official validation. 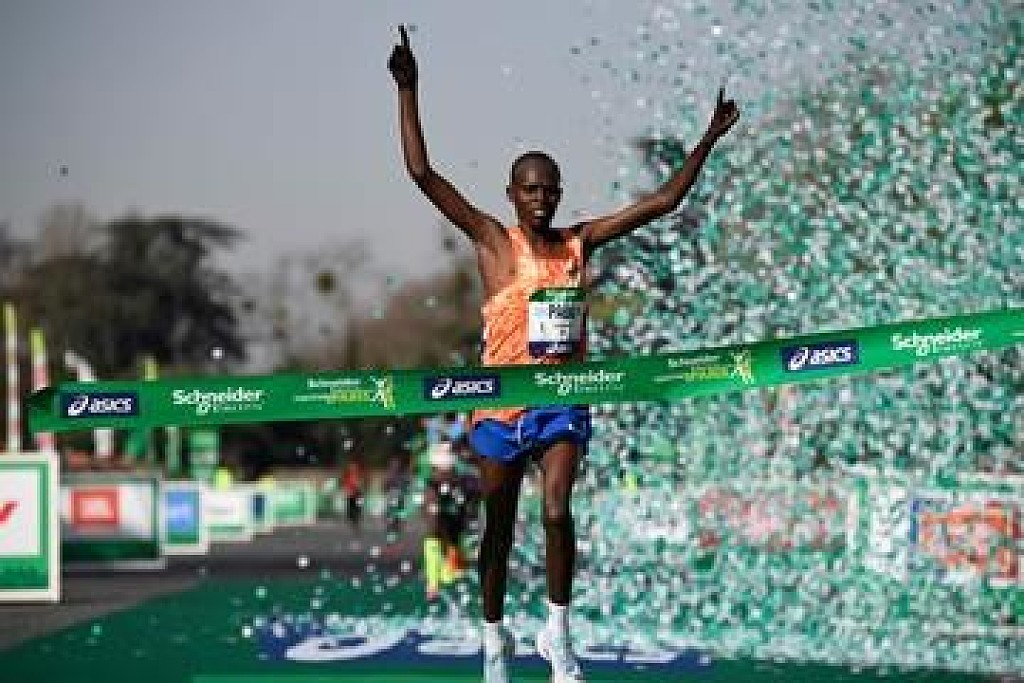 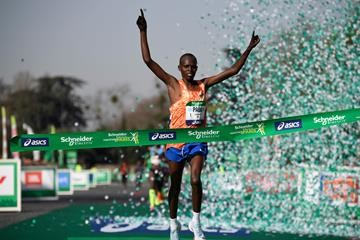 The 26-year-old Kenyan set his lifetime best of 2:06:10 when winning in the French capital two years ago. He came close to that mark last year when he retained his title in 2:06:25, the second-fastest time of his career.

He hasn’t raced since then, however, and he picked up a slight injury last week when he slipped and fell in training, but he insisted that it shouldn’t affect his ability to compete on Sunday.

Lonyangata faces a tough challenge, though, as he will line up against fellow Kenyans Augustine Choge, Hillary Kipsambu, Ishmael Bushendich and Barselius Kipyego, plus a duo of Ethiopian men with sub-2:05 PRs: Asefa Mengistu and Yemane Tsegay. 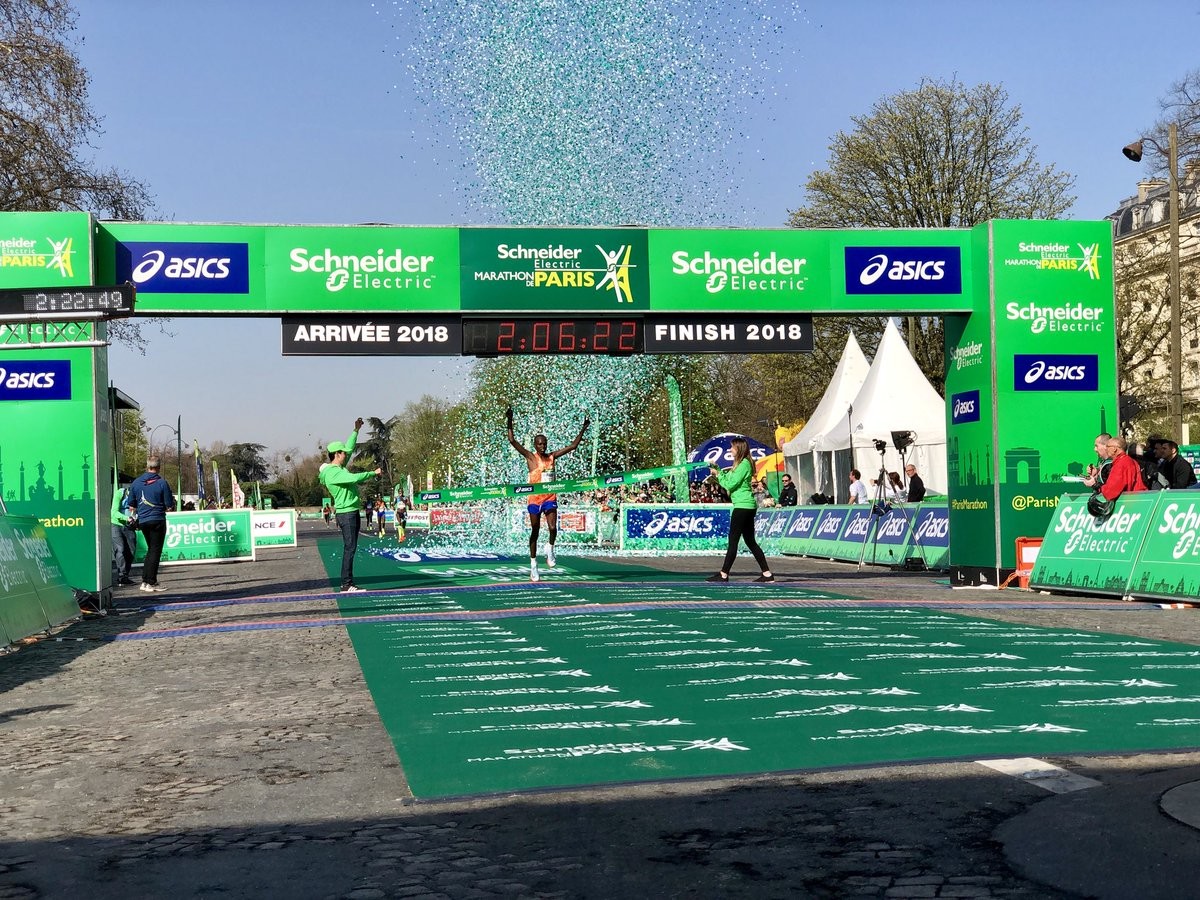 Choge, one of the most versatile distance runners in the world over the past decade, has won global medals indoors, outdoors and at cross country. The 32-year-old has moved to the roads in recent years and clocked 59:26 for the half marathon in 2017. His marathon debut in Chicago last year ended with a DNF but he is aiming for a better result in Paris.

With a best of 2:04:06, Mengistu is the fastest man in the field. A past winner in Seoul, Cape Town and Bloemfontein, he set his PR when placing fourth in Dubai in 2018. He finished third in Dubai this year and came close to his best with 2:04:24.

Tsegay’s PR of 2:04:48 dates back to 2012, but the 34-year-old is still highly competitive and won in Ottawa last year. More recently he finished runner-up in Fukuoka four months ago.

Nicolas Navarro, the second-fastest marathon runner in France last year, leads the domestic charge and will aim to improve on his PR of 2:12:39. 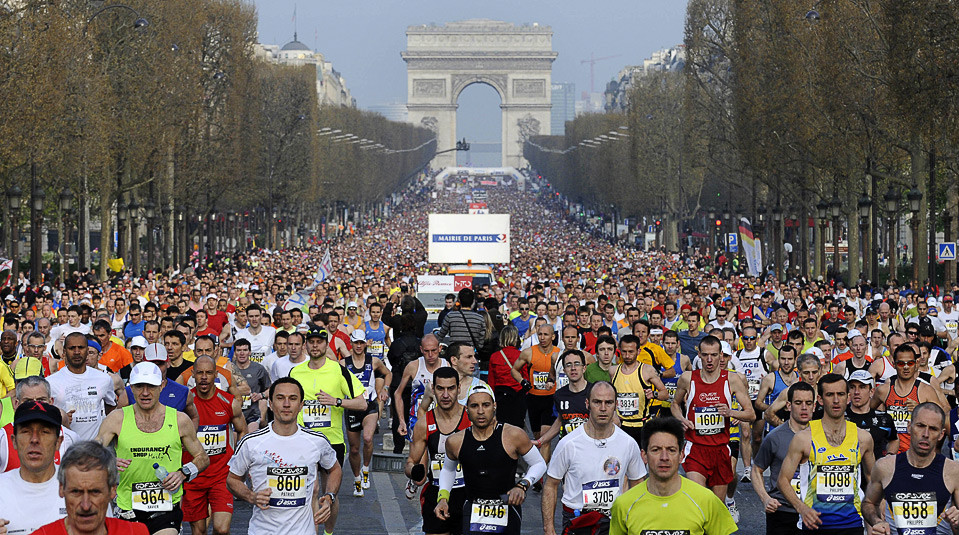 Almost all of the leading contenders in the women’s race set their PRs in 2018, so will be heading to the French capital in good form.

Gelete Burka – who, like Choge, has won global medals across a range of distances – is the most decorated athlete in the field. Winner of the 2006 world cross-country short course title and 2008 world indoor 1500m title, the 33-year-old Ethiopian finally conquered the marathon distance in 2018, clocking a PR of 2:20:45 in Dubai and then going on to win in Ottawa in 2:22:17, the first marathon victory of her career.

Kenyan athletes have won the past three women’s races at the Paris Marathon and 2014 world half marathon bronze medallist Sally Chepyego leads their charge this year. The experienced 33-year-old set her marathon PR of 2:23:15 when finishing second in Ljubljana last year. 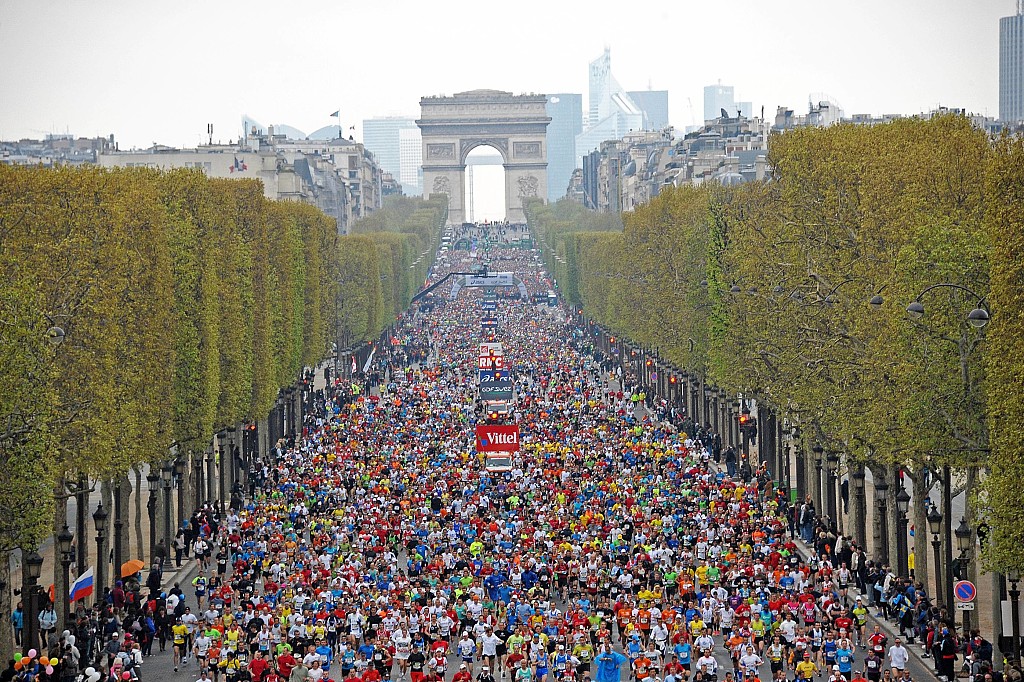 The 2019 Paris Marathon, sponsor Schneider Electric has touched the lives of Kenyan Women

Women in rural Embu County are the key beneficiaries of a project being rolled out in the region dubbed as the 'hifadhi project' which is being implemented by Livelihood Funds and supported by Schneider Electric. 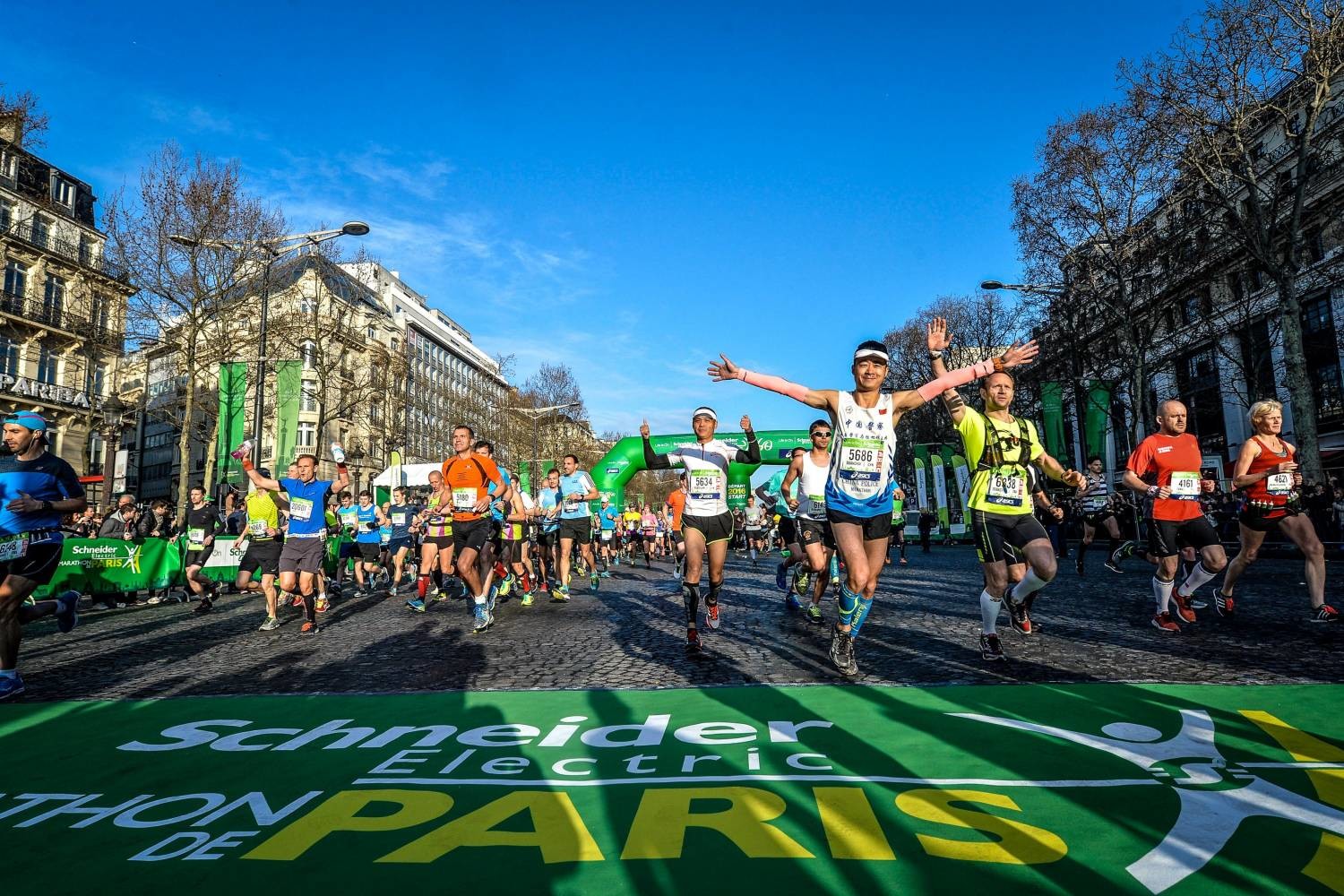 This will see women being given energy saving cooking stoves which are eco friendly. The "Hifadhi" stoves are 60 percent more efficient than the traditional three-stone open fires used in rural areas.

"Given the past exemplary performance of Kenyan marathoners at the Paris Marathon, Schneider Electric targets to offsets for the marathon with the benefits gained from the village in Embu," Gilles Vermot Desroches, Chief Sustainability Officer, Schneider Electric said. 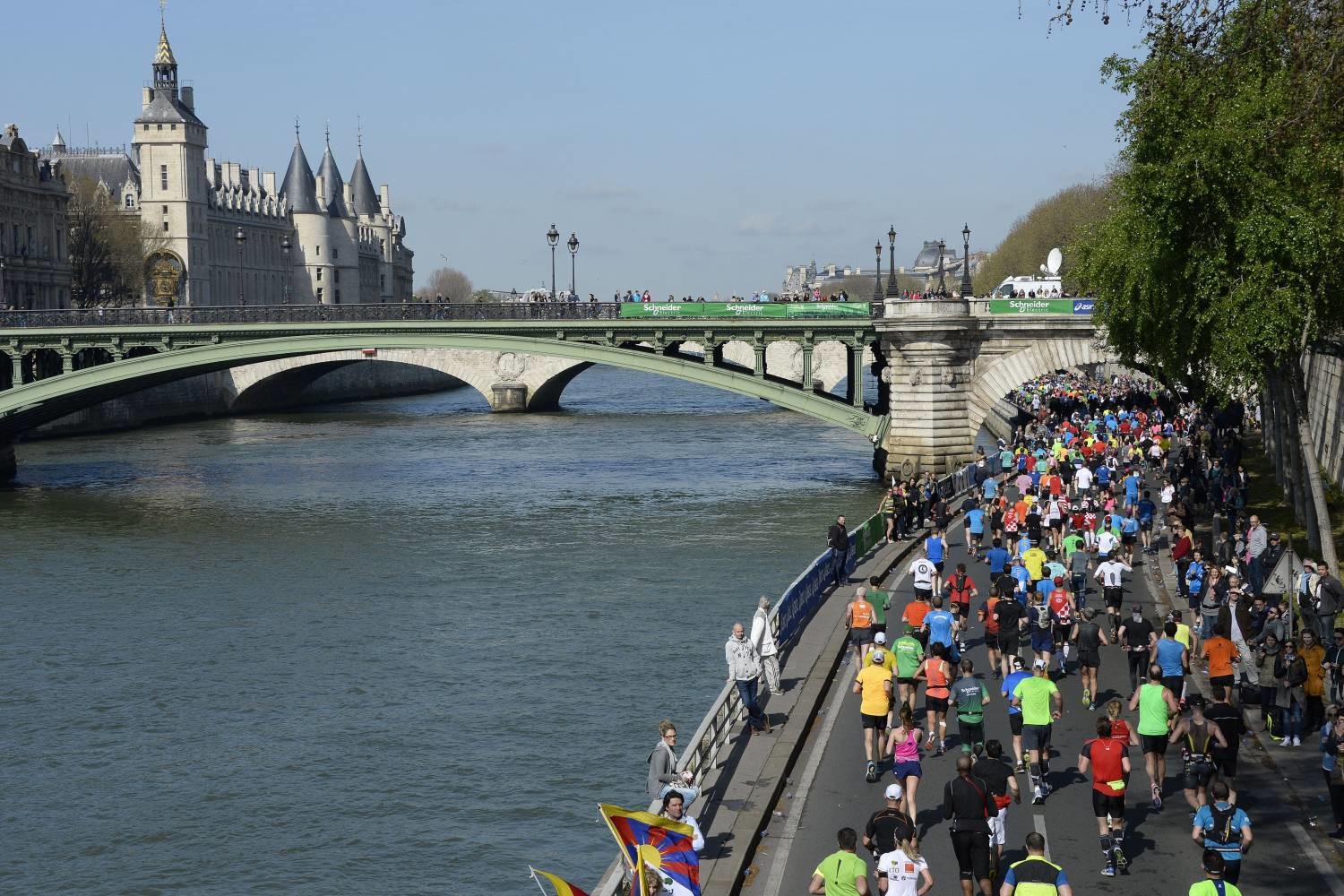 "This has gone a long way in empowering women in the rural areas who are now able to engage in small scale commercial activities, thanks to Hifadhi stoves. And this is just but the beginning, Livelihoods and Climate Pal's clean cookstove project will be distributed to 60,000 households- benefitting more than 300 villages and 300,000 Kenyans."

To mark the occasion, Schneider Electric is accelerating its ambition and commitments for climate by helping its customer to avoid 100 M tons of CO2 emissions thanks to cleantech solutions.

"As sponsors of the Marathon de Paris we want to engage our employees, customers and partners who are training to join our commitment to more sustainable cities," said, Chris Leong, CMO of Schneider Electric. We are making the cities more livable with our solutions for buildings, industry and homes and we want to do more to enable marathon runners and their families to get involved." 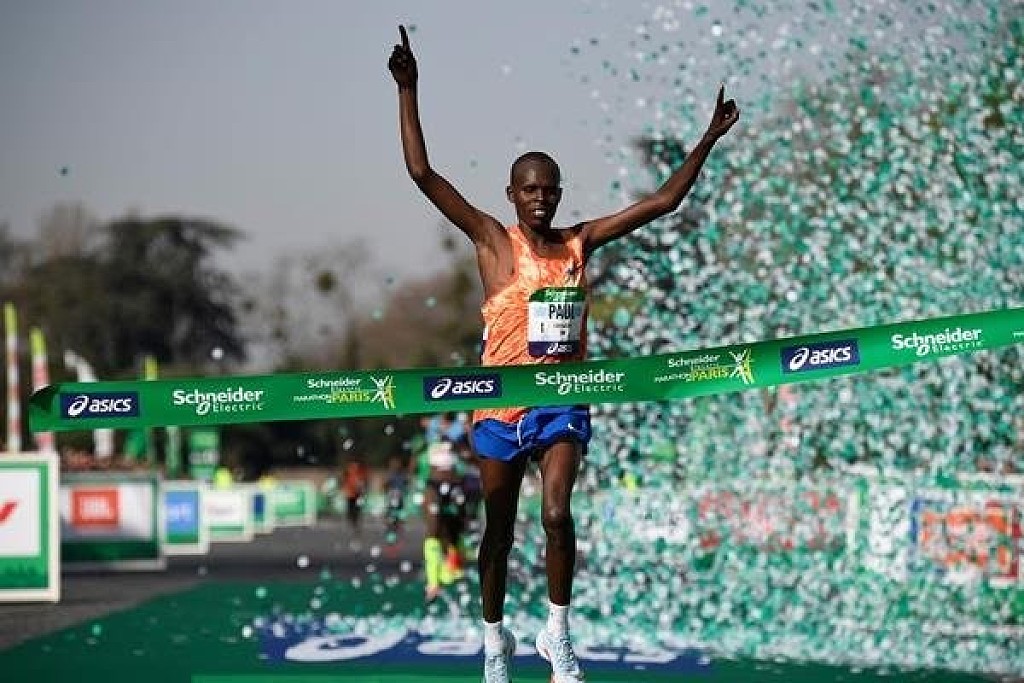 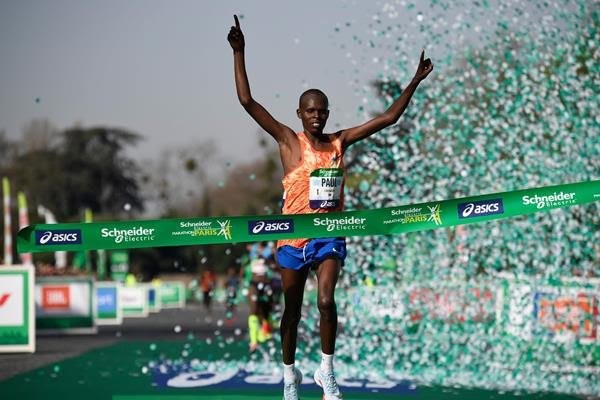 Paul Lonyangata and Betsy Saina ran to victories at the Schneider Electric Paris Marathon, an IAAF Gold Label road race whose 42nd edition took place today April 8. Lonyangata clocked 2:06:25 to become the first man to win back-to-back titles since Briton Steve Brace in 1989 and 1990. Saina clocked 2:22:55 to take the win in the first marathon she's completed. In the men’s race, a large group detached itself from the gun with 20 athletes, including all the favourites, reaching five kilometres in 14:54. They maintained a steady tempo, hitting the 10km marker in 29:51, suggesting a possible finish time of 2:06:00. Midway through the 40th kilometer, Lonyangata decided to put in a surge, leaving Kisorio behind for good. Lonyangata then took advantage of having the lead women in sight –-the women’s race had begun 16 minutes and 26 seconds before the men’s-- to continue his quest for a successful title defence. He eventually caught the leaders before crossing the line in 2:06:25, 15 seconds outside his personal best set last year in Paris. “It’s a wonderful day for me. I love Paris so much,” said a delighted Lonyangata, who led a Kenyan sweep. Kisorio held on to finish second in 2:06:36 with Ngeno third in 2:06:41. (04/08/2018) ⚡AMP 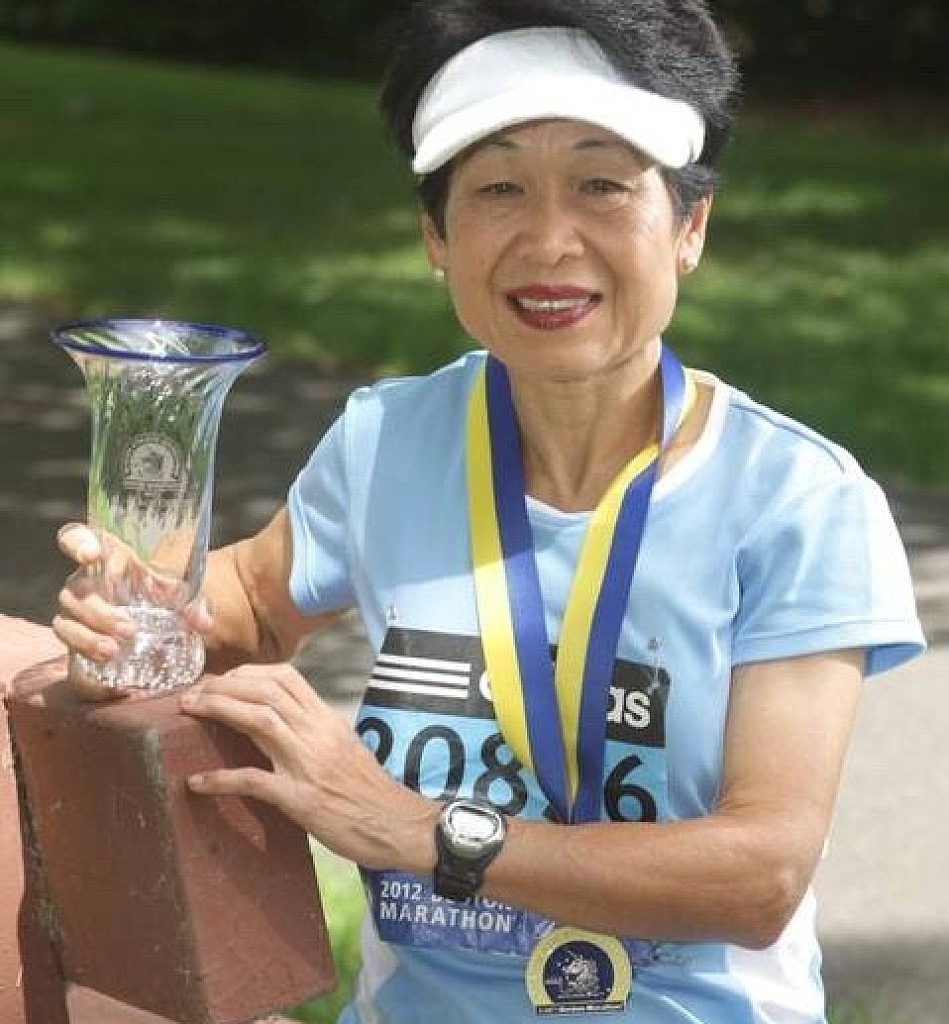 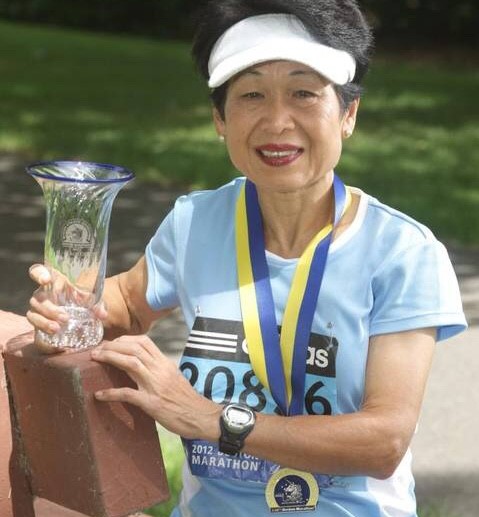 Some people slow down with age, but it’s not stopping a Richland, Washington woman from running the Paris Marathon on Sunday. Maron Wang, 71, took off on Wednesday for France with a goodwill package from Delta staff at Sea-Tac airport. “The Delta staff were all amazed at my marathon enthusiasm at my relatively mature age,” she said. Wang will be one of the 55,000 people running in the 42nd Paris marathon. The race starts at 8:20 a.m. Paris time on Sunday. Her enthusiasm for long-distance running started in 2002 when her second child left for college. Since then she’s run in more than a dozen marathons, including a top finish in her age group (4:05:32) at the 2012 Boston Marathon. She runs 25 to 65 miles a week. Running keeps her fit and energized, along with keeping her occupied, she said. After nearly 16 years of long distance running, the Paris marathon will be her last, she said. (04/07/2018) ⚡AMP 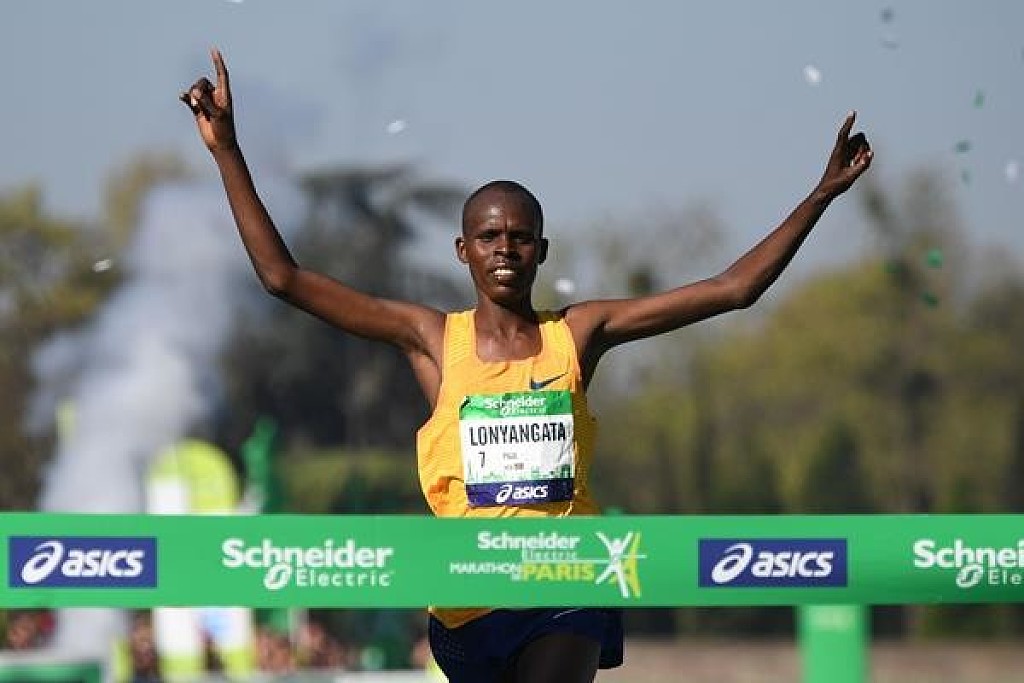 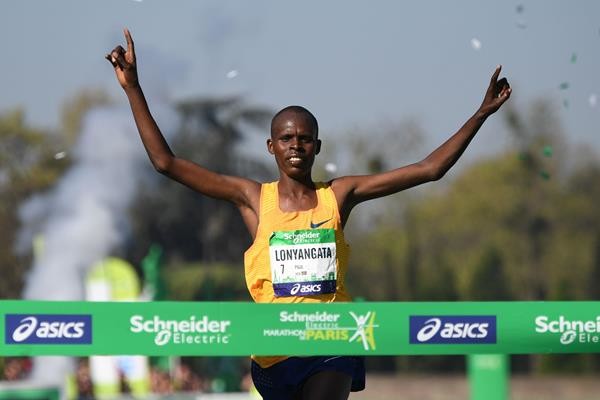 The Paris Marathon course starts at the Champs-Elysees and then heads toward the Place de la Concorde and continue through the city to finish at Foch Avenue. Along with the Berlin Marathon and the London Marathon, it is one of the most popular marthons in Europe. For this years race this weekend Kenya's Paul Lonyangata will be looking to retain his title. The Kenyan could become the first man to win back-to-back titles since Steve Brace of Great Britain in 1989 and 1990. Last year, he improved his personal best to 2:06:10. On the women’s side, the battle for the victory should, on paper, come down to a duel between Amane Gobena of Ethiopia and Ruth Chepngetich of Kenya. Gobena, second in the event three years ago, clocked a best of 2:21:51 in Tokyo in 2016. She also won in Mumbai in January. (04/06/2018) ⚡AMP