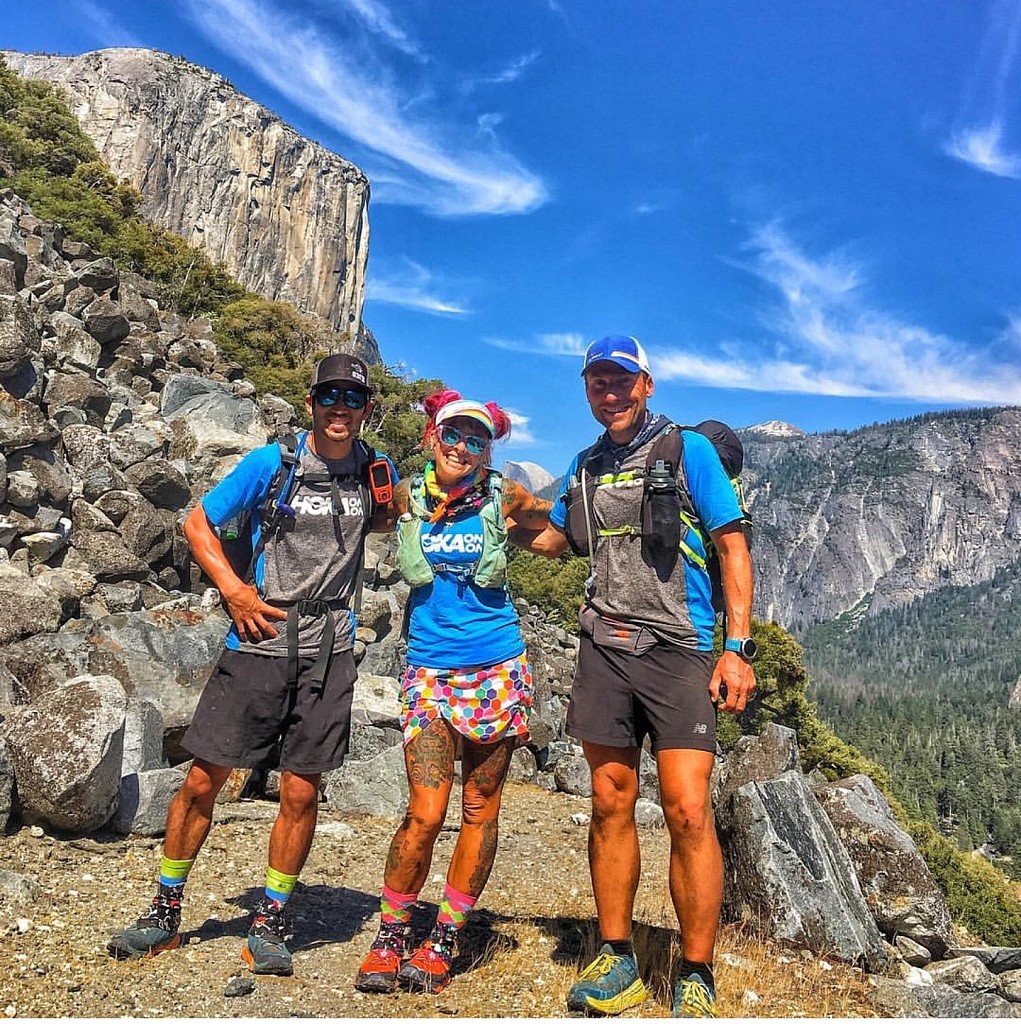 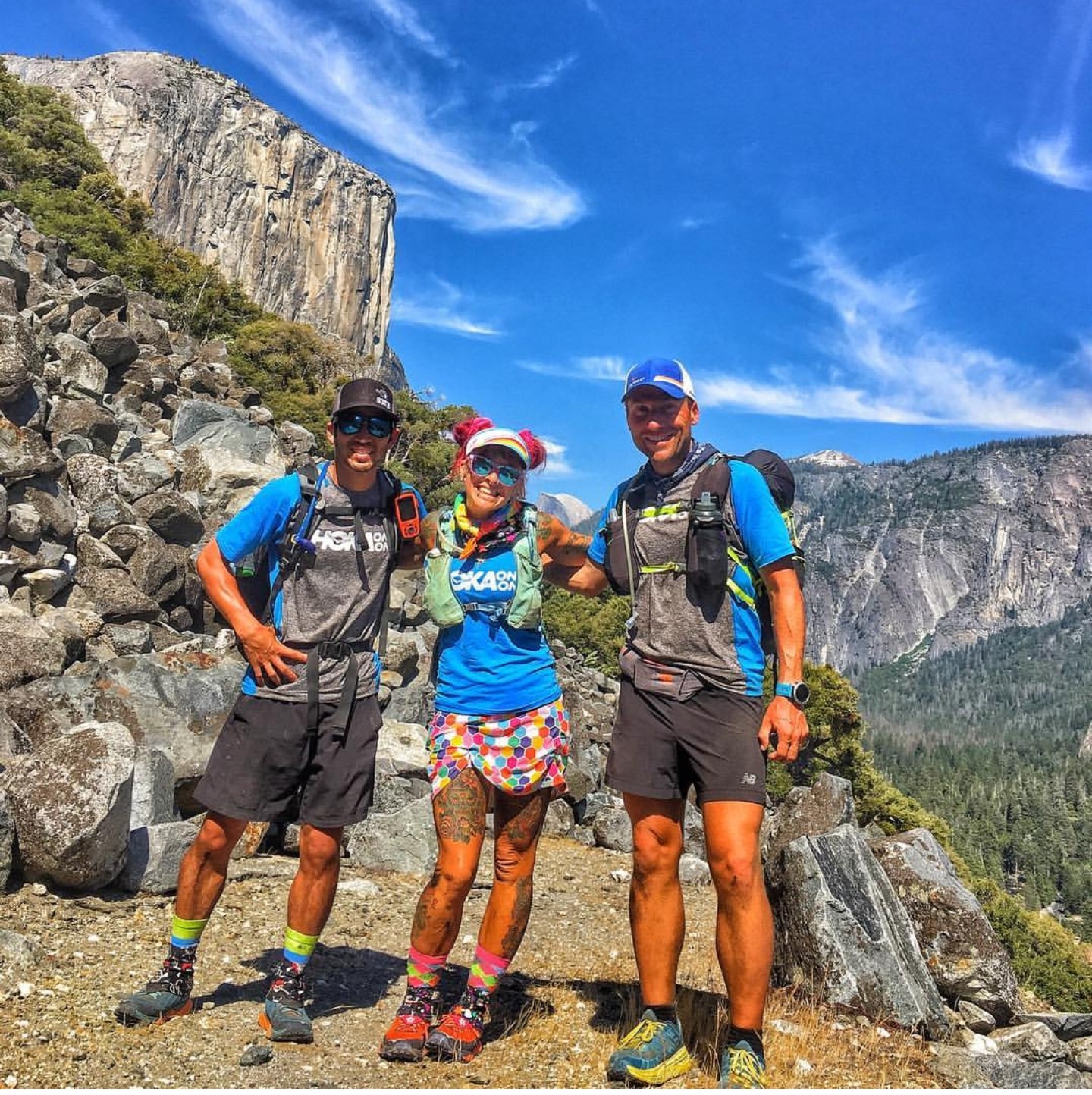 On an afternoon 25 years ago, Catra Corbett figured her life was over.

She looked in a mirror and saw purple dashes under her bulging, red eyes, a face painted white, black lipstick and a sad, tired expression that wondered when her next hit was coming. She looked like an extra in “Buffy the Vampire Slayer.” She was a go-go dancer who sold drugs and danced all night in clubs. She’d been up three days.

“This sucks,” she thought to herself, but she saw no way to change it.

But it did change, after the cops broke down her door and arrested her. A judge, knowing this was her first offense, made her a deal: If she gave up drugs, he would give her a clean slate. If she didn’t, she would go to jail.

One night in jail scared her enough to give up drugs. She returned to her hometown of Fremont, Calif., away from the club and her friends, and moved in with her mom. She was depressed. She was bored. She wondered if she would stay off drugs. And then she entered a 10K.

Now she is one of the most successful ultrarunners of all time, a woman who completed more than 250 races and ran 100 miles more than 125 times. She is also the most extreme and famous example of the turnaround that extreme sports see in an unusual percentage of its participants.

She is the most visible example, with pink hair, bright, colorful clothes and tattoos all over her body, but there are many others. Corbett once said she believed that 50 percent of all ultrarunners are addicts.

That figure is likely too high, especially with the boom in ultrarunning and the waves of extraordinary athletes and tough-as-nails competitors dominating the sport now, but there are many examples that suggest it is not only a piece of its history, it is still a part of the sport, a part that ultrarunning or other extreme sports don’t care to hide. 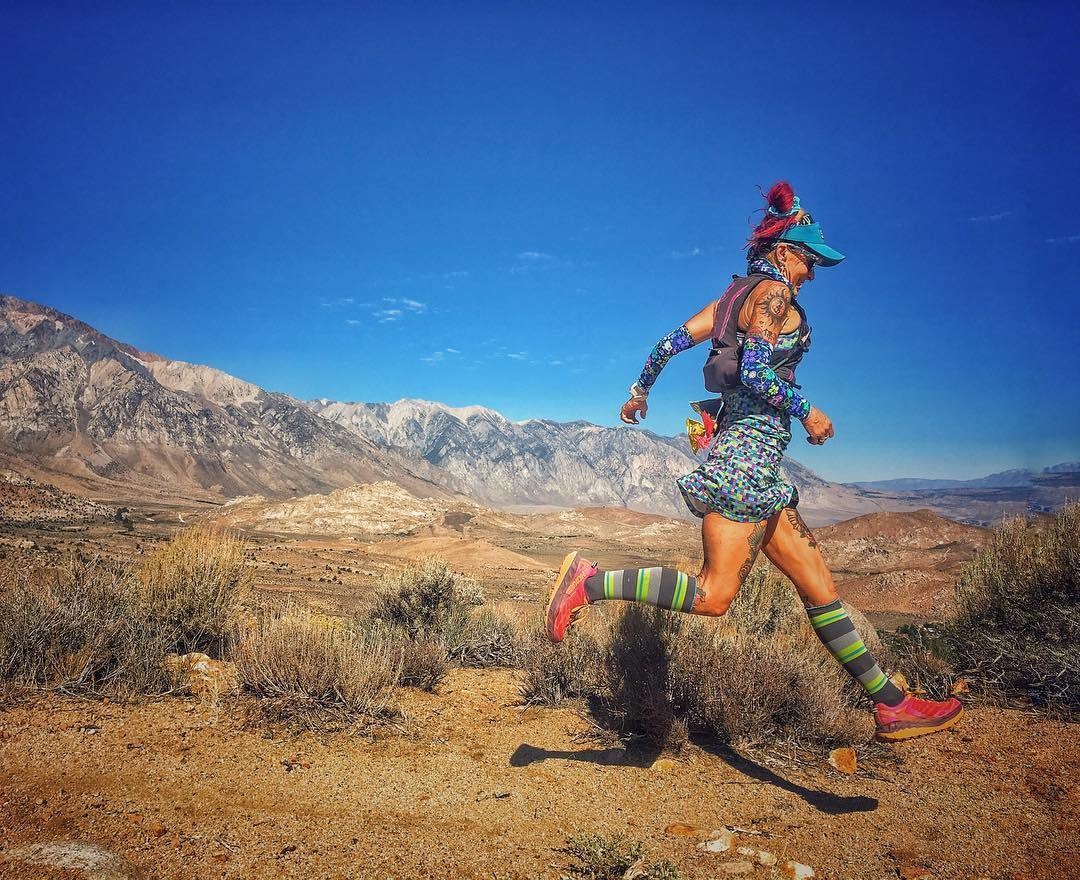 Timothy Olson, a recovering addict, won the Western States 100, perhaps the most prestigious ultra, in 2012 and 2013 and once held the course record. Charlie Engle, one of the sports best-known extremists, was a crack addict.

Other extreme endurance sports have attracted addicts as well, such as Lionel Sanders, who signed up for the Ironman triathlon in 2010 to help him beat his addiction to drugs and became a star, finishing second in the Ironman World Championships in 2017. Corbett was clean when she began running, but she said it helped her stay that way.

“It was mostly the running,” she said in an interview. “It gave me a purpose kept me focused.” 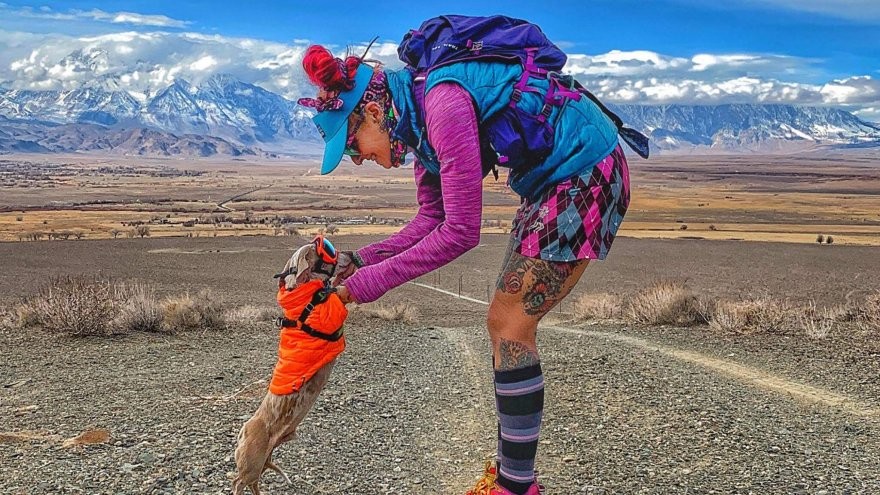 Experts saw the potential link between exercise and fighting addiction and are now using it to help addicts battle their cravings, even if they aren’t running 100 miles to do it. Even a 10-minute walk, one expert said, can stifle the need for a fix.

Experts have long searched for solutions to the problem of helping people stay sober when little else seems to work. But more are finding that the solution isn’t frog’s breath or a strange hobby or therapy dog. It’s just a matter of moving.

“It’s not a magic bullet,” said Alex Murphy, behavioral health consultant with North Range Behavioral Health in Greeley who has treated drug addiction. “But there’s a lot of good things that come from it.”

Those good things include dopamine, along with serotonin, which triggers happiness, and norepinephrine, which helps with energy. Those neurotransmitters are released in generous quantities when you work out, especially when you do it outside.

Many drugs trigger the release of dopamine — even a brisk, 10-minute walk can release a bit and help an addict fight cravings.

“Dopamine drives both motivation and pleasure,” Murphy said. “The more we can find healthy releases of that, the better. It won’t provide the same levels that the drug will, but it can give you a higher baseline and squash some of the cravings.”

Corbett said the natural high — many call it the “runner’s high,” even though many longtime runners say it’s a gross exaggeration — was a key to keeping herself off drugs. 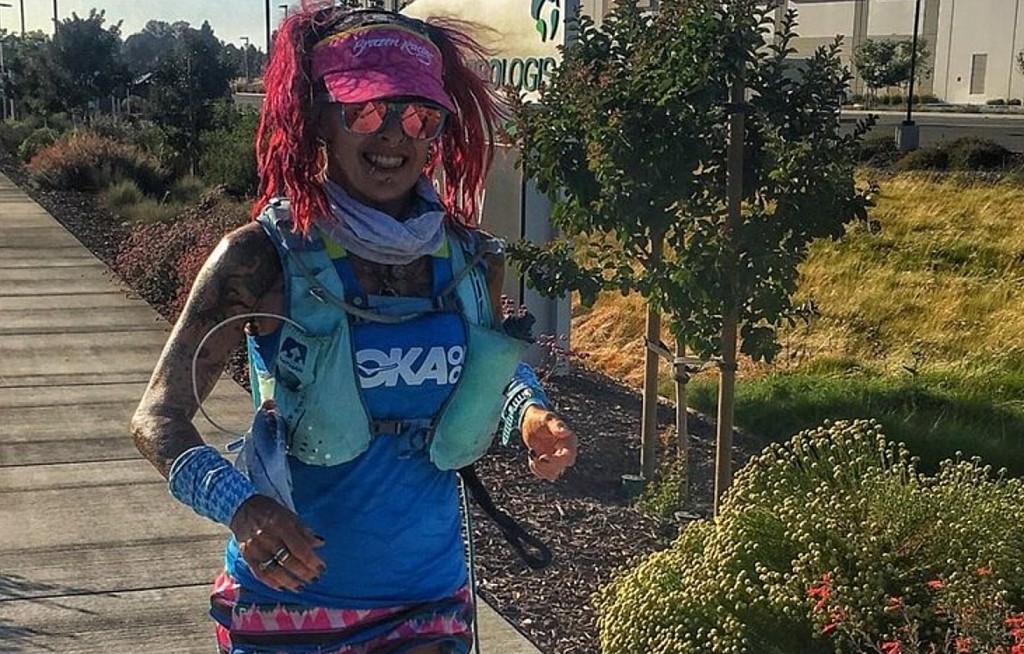 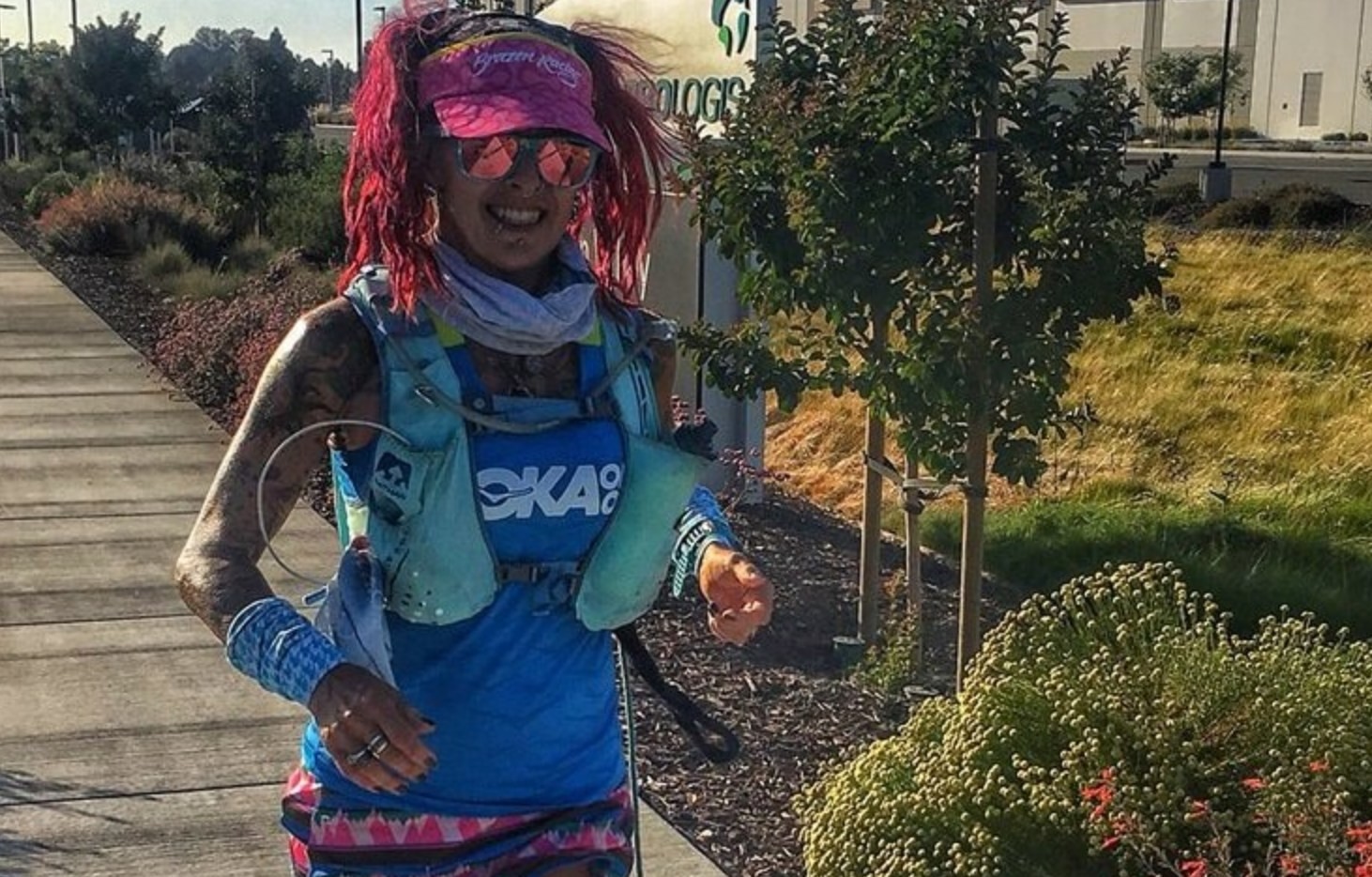 Vegan ultramarathon runner Catra Corbett has set a new record on the legendary John Muir Trail. The 53-year-old athlete, who has openly spoken out about her previous abuse of crystal meth and alcohol, had already set a previous record on the 212-mile course.

Now she has just set another in the 310-mile course known as the Muir ramble route, which covers 310 miles of California, and was originally explored and recorded in 1868 by John Muir. Corbett's new record is for the Fastest Known Time (FKT) for completion.

She finished the 310 miles - which became 323 miles with diversions - in seven days, nine hours, and 49 minutes. Corbett, who has run over 100 races of 100 miles or more - and is world famous for her exploits and her commitment to positive thinking and living - was supported by a small team who paced and equipped her during the record attempt.

"There is no way I could have done it without Phil Nimmo help but mostly Dave Wiskowski and Chubky they were my crew on foot the last 66 miles," Catra told followers on social media. "We spent the night in the wilderness huddled together. They pushed me and helped motivate me. We all fell apart many times out there but kept it together.

"There were places there were no trails, and we had to route find our way. I'm happy I knew the last 15-mile section. We crossed slowly over two miles of rockfall, but the views were amazing. We almost had to turn around because the trail was completely gone due to a recent rockfall. Dave navigated us safely up and over it. We worked as a team to get it done." 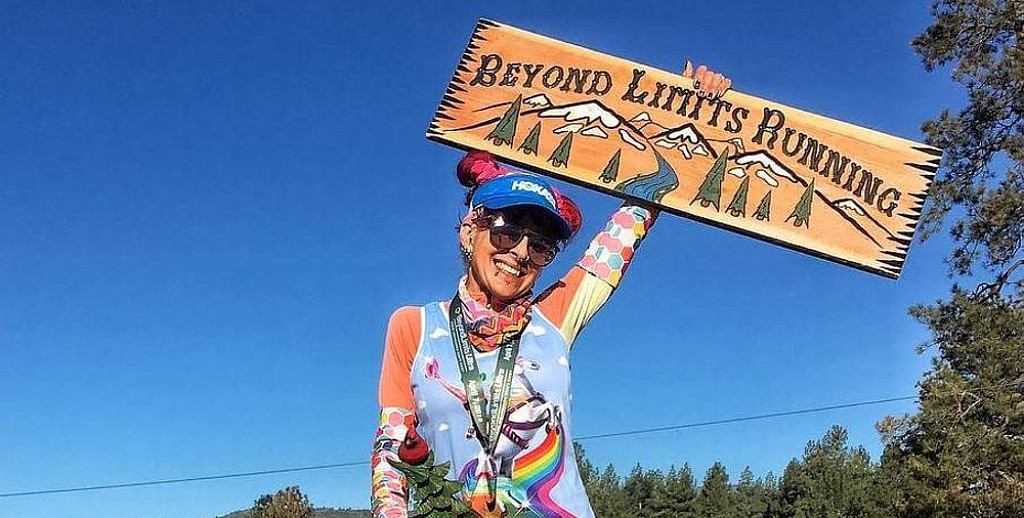 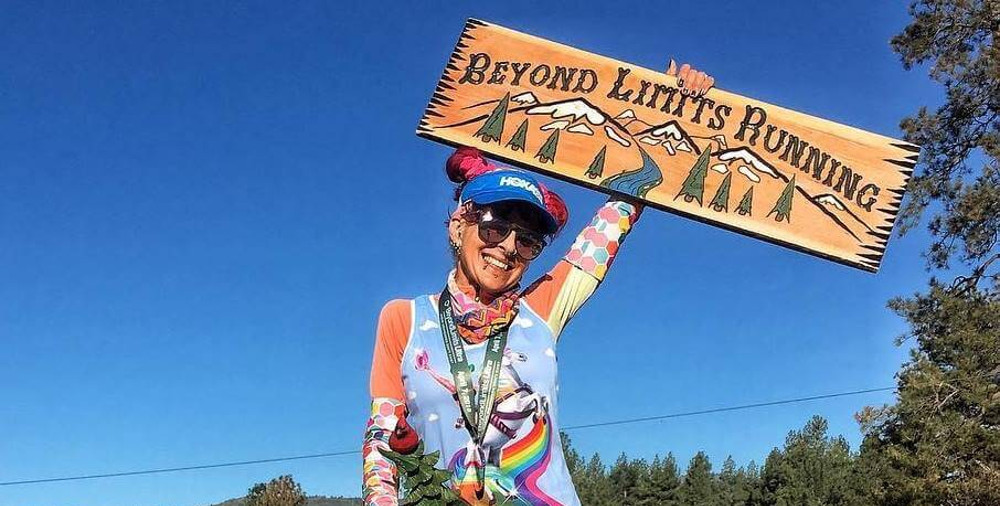 This ultra-marathoner is always decked out in brightly colored, punk-inspired outfits flashing a smile

Vegan ultramarathoner Catra Corbett placed first in the female division of this past week’s 72-hour Beyond Limits Ultra race. The plant-based athlete covered 192 miles, breaking a personal record. The ultramarathon took place over the course of three days at Pathfinder Ranch, a wildlife preserve situated in California’s San Jacinto mountains, just south of Palm Springs. Participating runners repeatedly traversed a two-mile trail loop over 72 hours. According to the website, the Beyond Limits Ultra is considered “one of the most unique ultra events in the southwest.” “This year my plan was to win 1st Female in the 72-hour race and beat my previous 72-hour record which was 174 miles,” the vegan runner told Great Vegan Athletes, declaring that “If you’re not having fun you’re doing it all wrong!” Having fun is clearly an essential part of this endurance challenge, at least for Corbett. In every photo, she can be seen decked out in brightly colored, punk-inspired outfits, flashing a smile. (04/17/2018) ⚡AMP