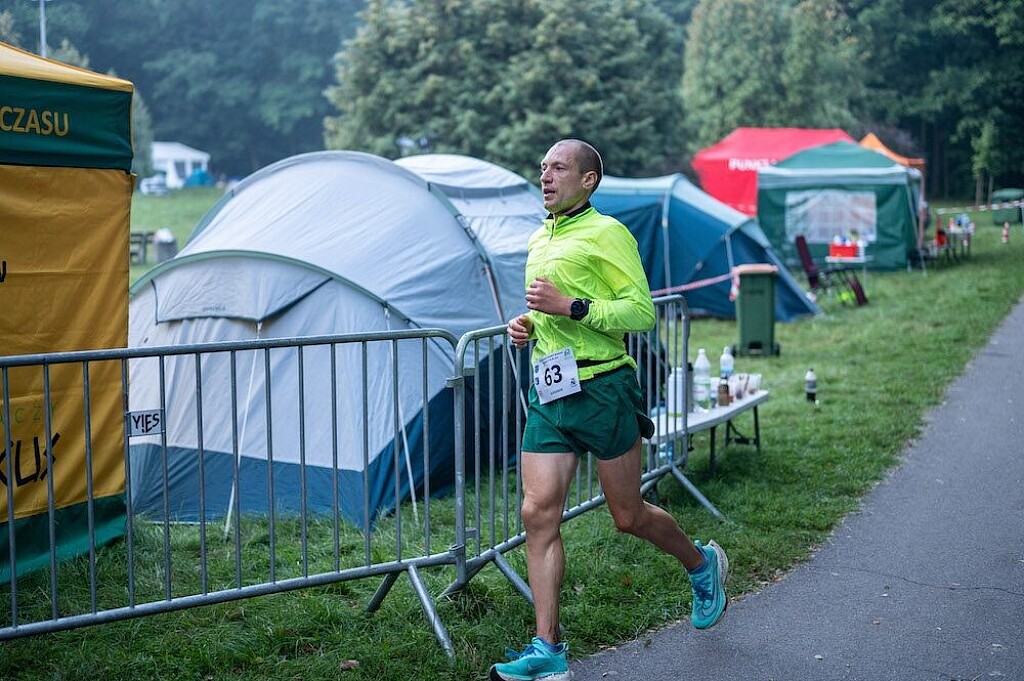 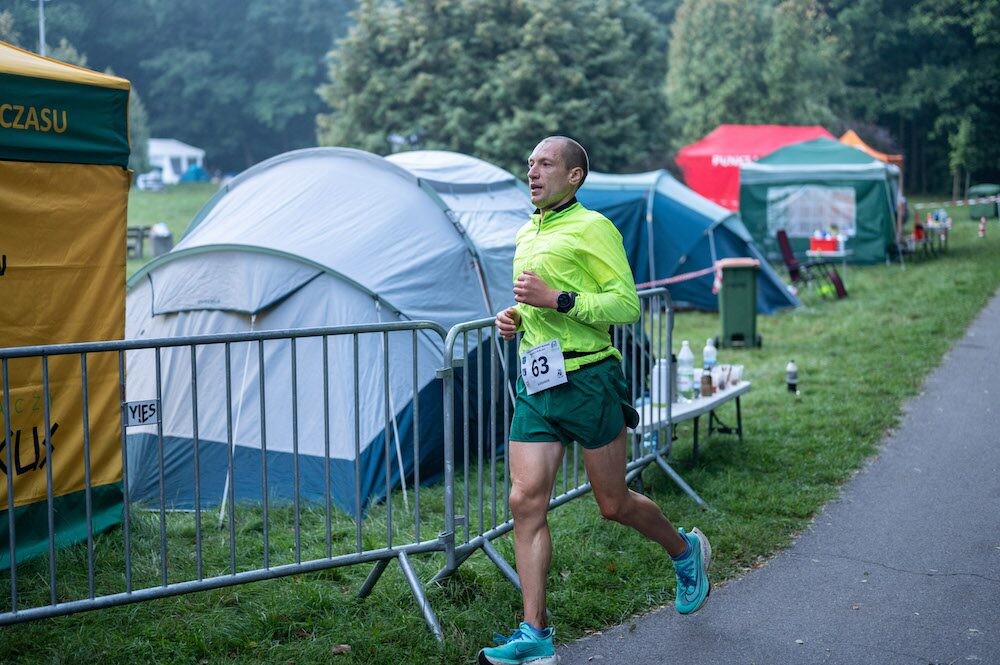 The greatest distance runner in Lithuanian history, Aleksandr Sorokin, has done it again, smashing two of his world records at the Spartanion 12-hour race in Israel. Sorokin completed 122 laps of a 1.46-kilometer loop to equal 177 kilometers of running in 12 hours – an average of 4:03/km.

To put his performance in perspective, his time is equivalent to running 35 straight 5Ks in 20 minutes and 15 seconds each. When Sorokin started the race, his goal was to break the 12-hour record. It wasn’t until after halfway that he realized he was on pace to shatter his previous 100-mile record of 11:14.56.

He broke his previous personal best by 23 minutes, running 10:51:39, a whopping eight-second improvement per kilometer. 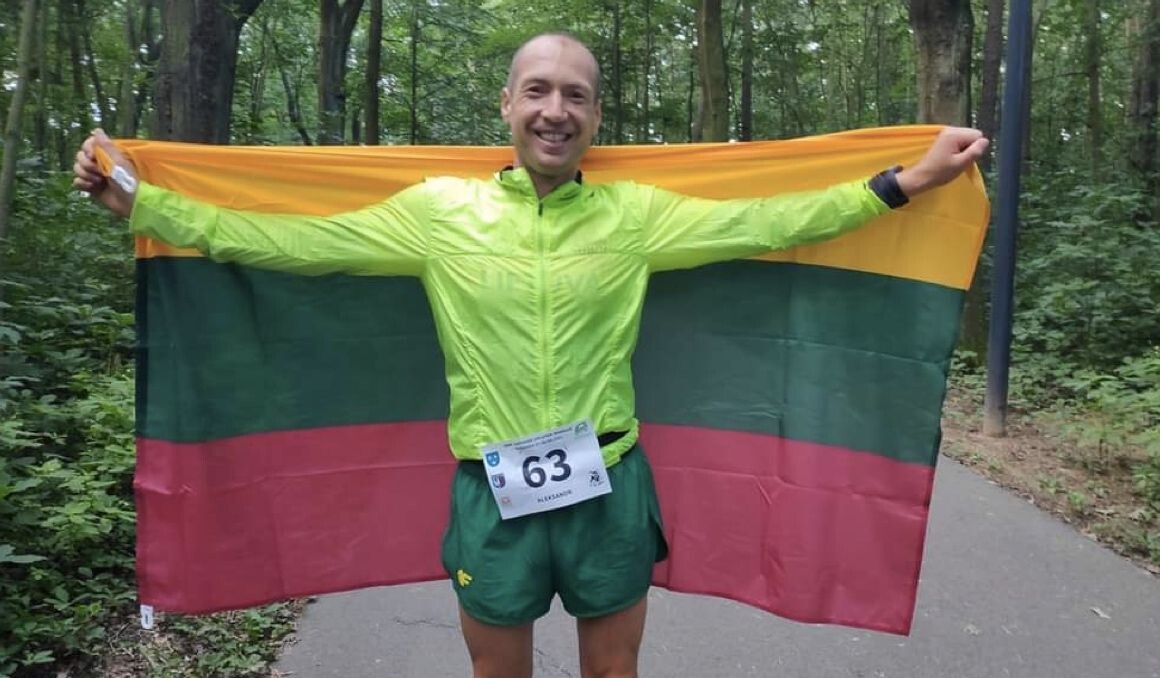 Sorokin is the first human to break the 11-hour barrier. There are no words to describe this performance besides remarkable. Even the 11:30 barrier has been untouched by many ultrarunners.

Sorokin raced again in the Nike Alphaflys. “A friend of mine gave me pair of Alphafly’s to try in August. I liked the softness of the shoe. Then I took the risk of wearing it during the race,” he says. “I find that cushioning is important for recovery when running long distances.” 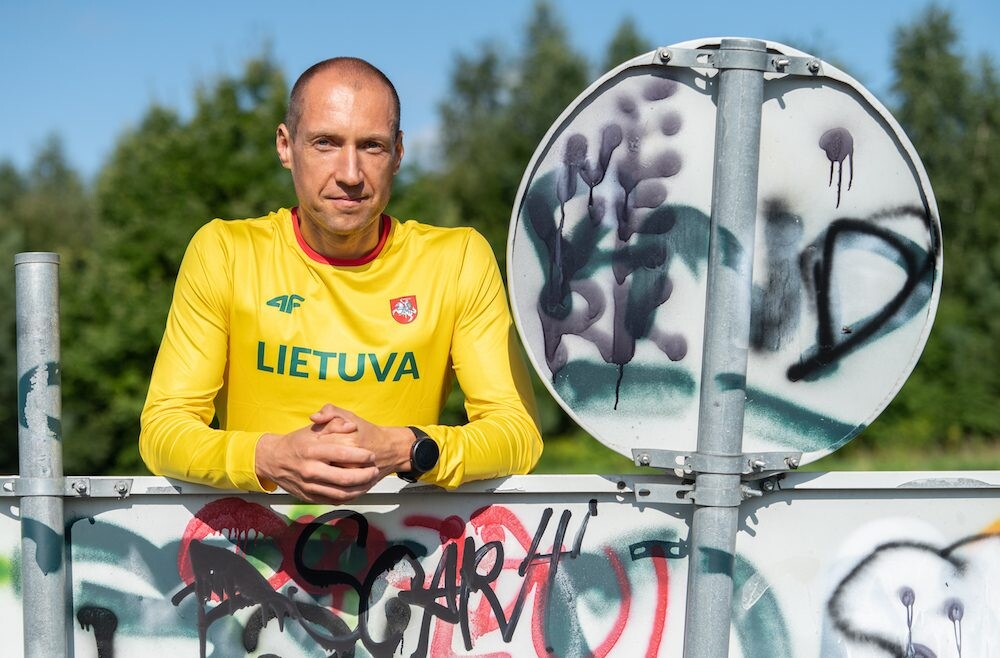 Sorokin told us in a previous interview that he dreams of continuing his running career and pushing boundaries further. “I hope to compete at the world 24-hour championships this year and run a race in the U.S,” he says. 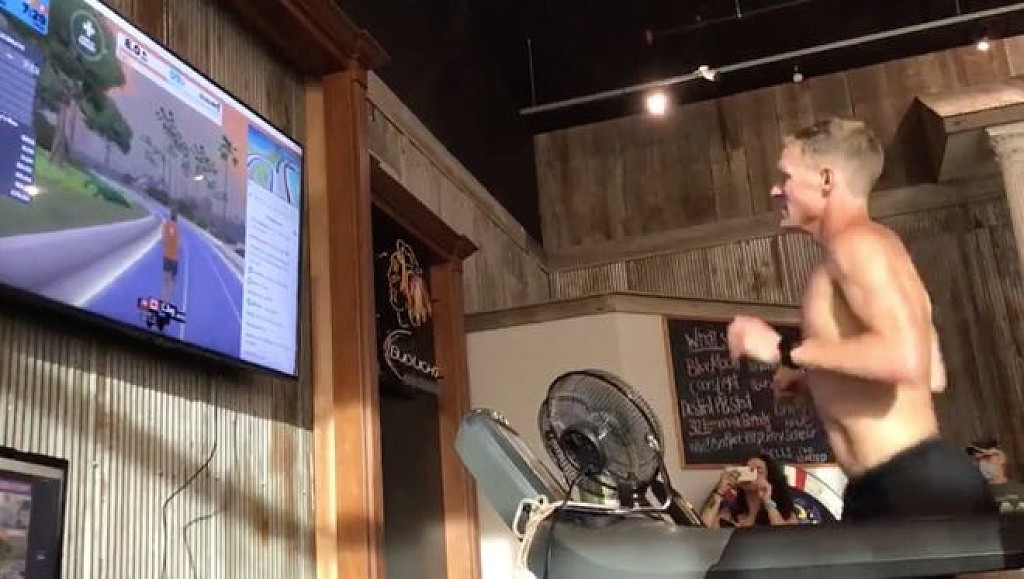 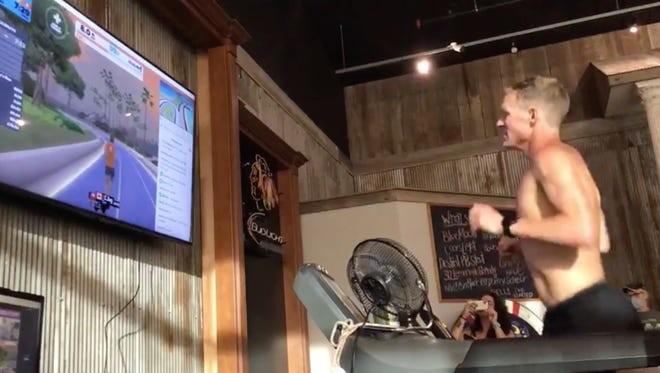 American ultrarunner Taggart VanEtten crushed the 100-mile (160K) treadmill world record on Saturday, running a mind-boggling 11:32:05 at an event in Morton, Ill. VanEtten’s run lowered the previous world record significantly, shaving 37 whole minutes off the 12:09:15 result that Zach Bitter set last May. His result works out to an incredible average pace of 4:18 per kilometer.

It has been a tough couple of weeks for Bitter’s resume, as he has had his name erased from three ultrarunning world records in that time. First, Lithuania’s Aleksandr Sorokin beat Bitter’s 100-mile and 12-hour world records at an event in the U.K., lowering the two results to 11:14:56 and 170.309K, and now VanEtten has beaten Bitter’s 100-mile treadmill best.

When Bitter set the 100-mile treadmill world record last year (beating Canadian Dave Proctor‘s record of 12:32:26), it was hard to imagine anyone running faster. He averaged 4:32 per kilometre over the course of 12 hours, and it seemed unlikely that someone else would come even close to that (or want to spend that long on a treadmill) for a while. Just under one year later, though, VanEtten decided to give the record a shot, and he produced an even more amazing result. 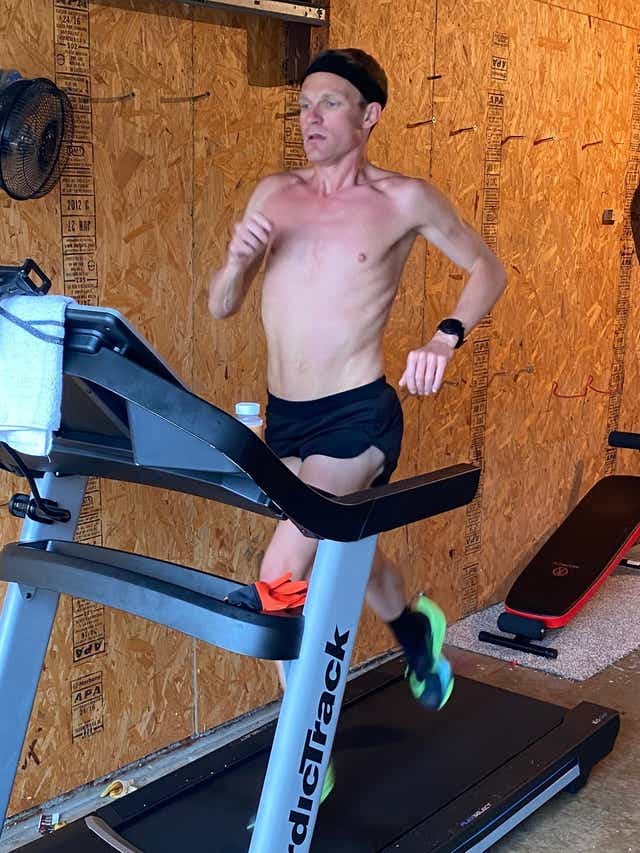 VanEtten announced his plans to run the treadmill 100-miler in January, writing about the record attempt on Instagram. “For years now I have been anti-treadmill,” he wrote. “However, for the sake of longevity in my running career I must utilize one for regular use.” At the time, he said he hoped to run under 12 hours — a goal that he ultimately shattered. 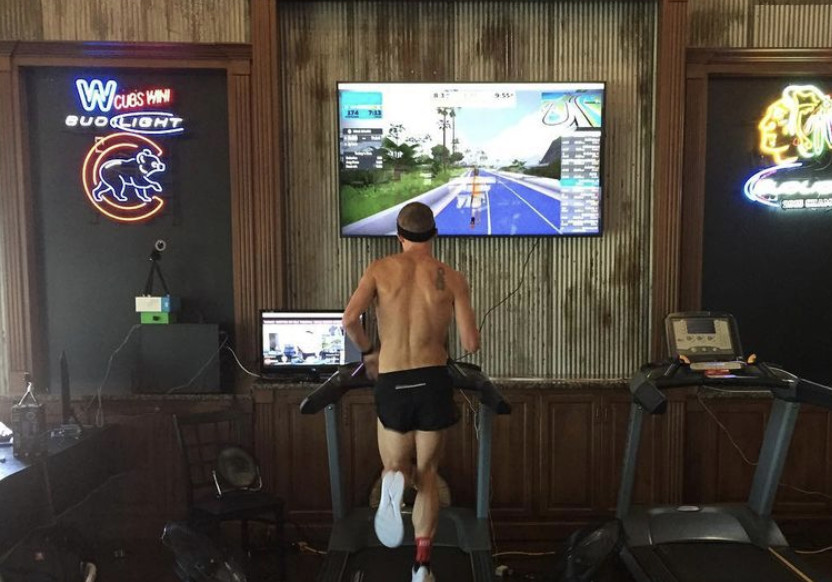 Running on a treadmill in a pub in Morton and keeping track of his progress on Zwift, VanEtten ran an impressively steady pace throughout. For the most part, he hovered between 4:10 and 4:20 per kilometre, and he never ran a kilometre slower than 4:58.

At 116K into the run, he posted one of his slowest kilometres of the day at 4:36, but he immediately made up for it by running 10K at sub-4:10 pace, including three sub-four-minute kilometres. His slowest kilometre of the day came at the 139K mark, but he regained his composure and remained steady in the 4:20s for the rest of the run. For context, his average speed of 4:18 per kilometre works out to a 43-minute 10K. Many people would be happy to run one 10K this quickly, but VanEtten ran 16 in a row at this pace.

To make the feat even more impressive, this record attempt was only VanEtten’s second official ultramarathon event. His first came in November 2020, when he won the Tunnel Hill 100-miler in Illinois. Despite the fact that it was his first ultramarathon ever, VanEtten not only won the race, but he posted the second-fastest result in the event’s history. His 12:19:55 finish was only 11 minutes slower than none other than Bitter, who owns the Tunnel Hill 100 record of 12:08:36.

VanEtten’s still a rookie when it comes to ultrarunning, but based on his two results so far in the sport, it’s safe to say his name is one that fans will get used to hearing in the coming years. 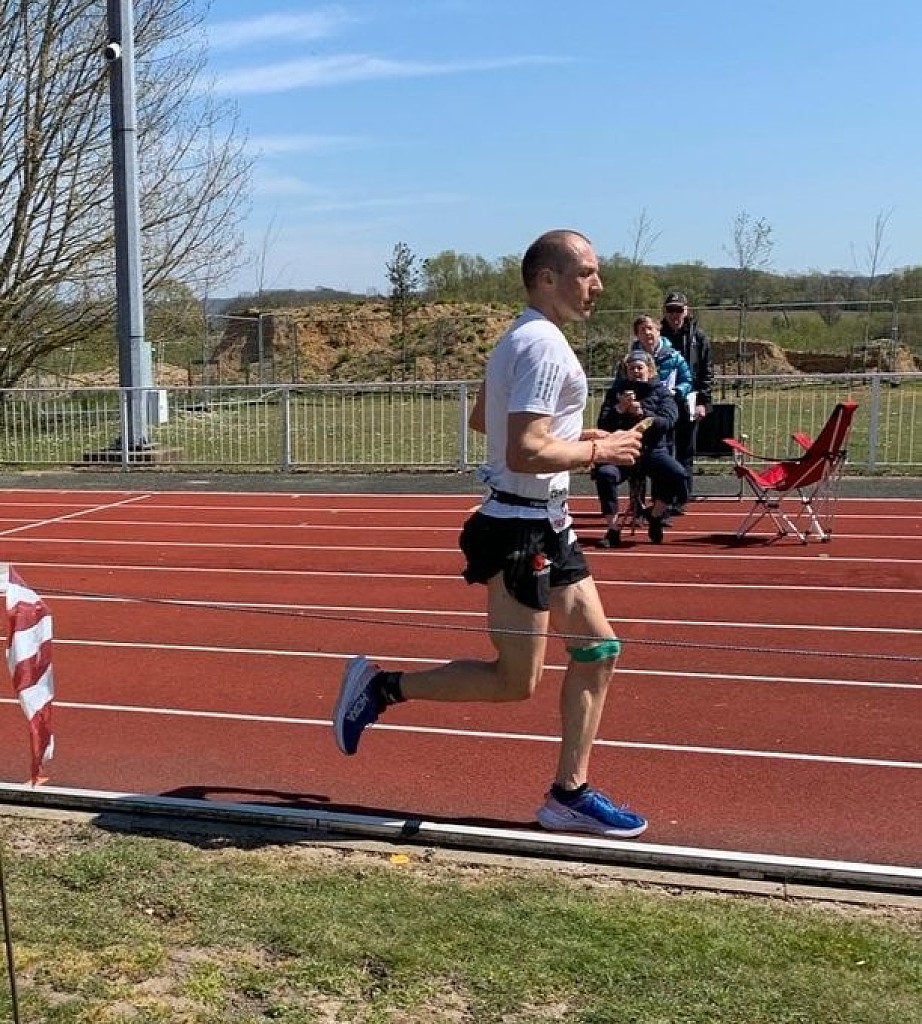 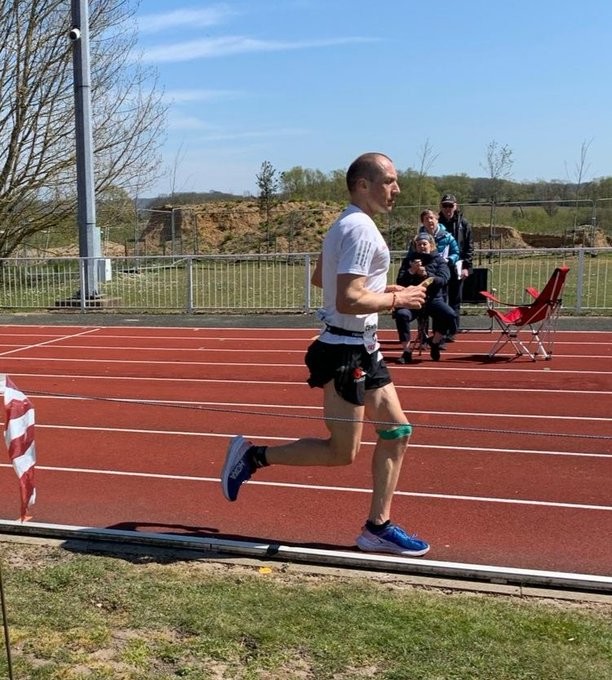 Lithuanian ultrarunner Aleksandr Sorokin broke the 100-mile and 12-hour world records at an event in Ashford, U.K., on Saturday, setting marks of 11:14:56 and 170.309K in the two categories. These results beat American Zach Bitter‘s world records, both of which he ran at the Six Days in the Dome event in Wisconsin in 2019. According to Centurion Running, the company that organized the elite-only event, Sorokin also broke the 150K world record (10:27:48) and the Lithuanian 50-mile best (5:32:01) on his way to the 12-hour finish.

Sorokin is no stranger to big results, and his resume includes top finishes at the 2019 IAU 24-Hour World Championships, which he won with a total of 278K in 24 hours, and the 2017 Spartathlon ultra in Greece, where he completed the 246K course in a little over 22 hours. His list of accomplishments just got even more impressive, though, with his records from Saturday’s run. 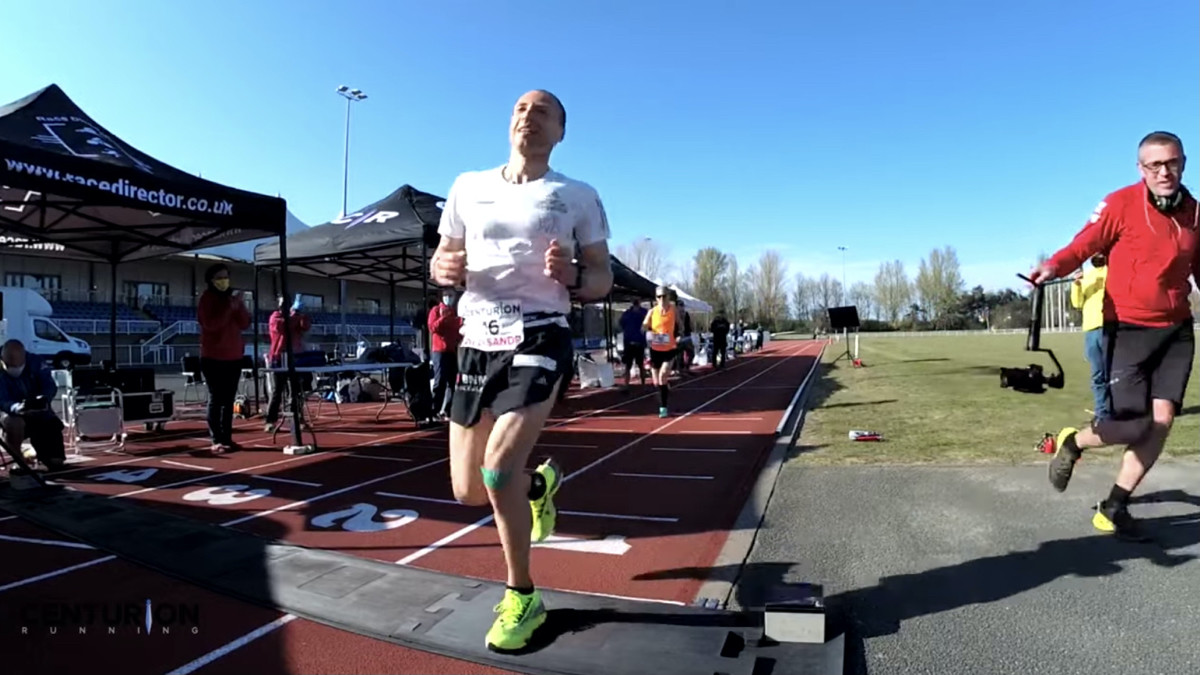 The event, which was dubbed the Centurion Track 100, featured a lineup of just 15 elite runners, each of whom was personally invited to compete. Entrants ran on a regular 400m track, and despite the race’s monotony and repetitiveness, Sorokin thrived, powering through each lap for 12 straight hours. He ran an incredibly even race the whole way, averaging 4:07 per-kilometer pace through 50K (he posted a 3:25:38 split), 4:08 pace after 50 miles (5:32:01) and the same at the 100K checkpoint (6:54:25). 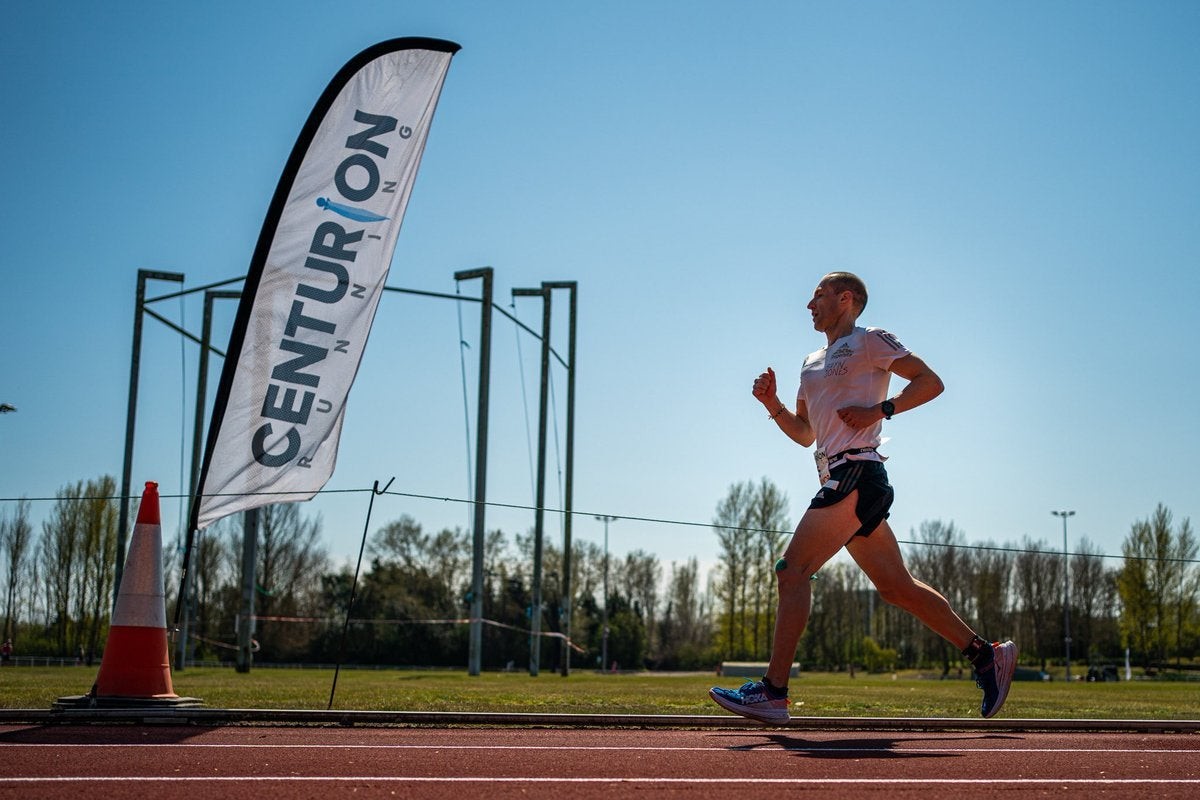 While Sorokin was chasing down his world bests, Britain’s Samantha Amend was busy working on records of her own. At the six-hour mark, Amend set the W40 British record of 72.995K, and she passed through 100 miles in 14:34:05, breaking the open national record for the distance. Several other athletes set national age group records over the various distances as well on Saturday.

All records set in Ashford are still unofficial, but the Centurion Running website notes that the course was certified by UK Athletics, so the times should all be ratified soon. 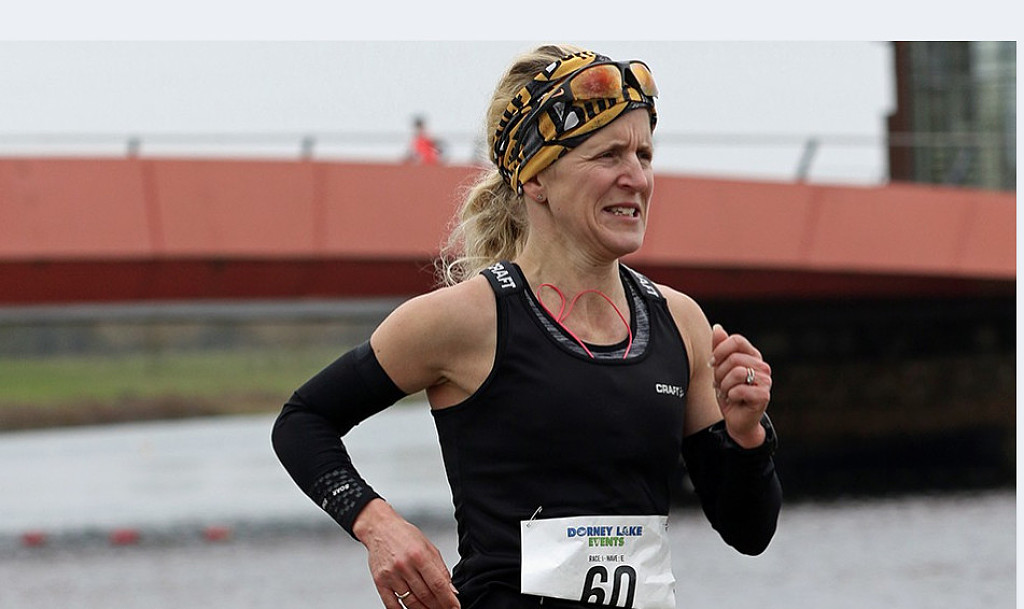 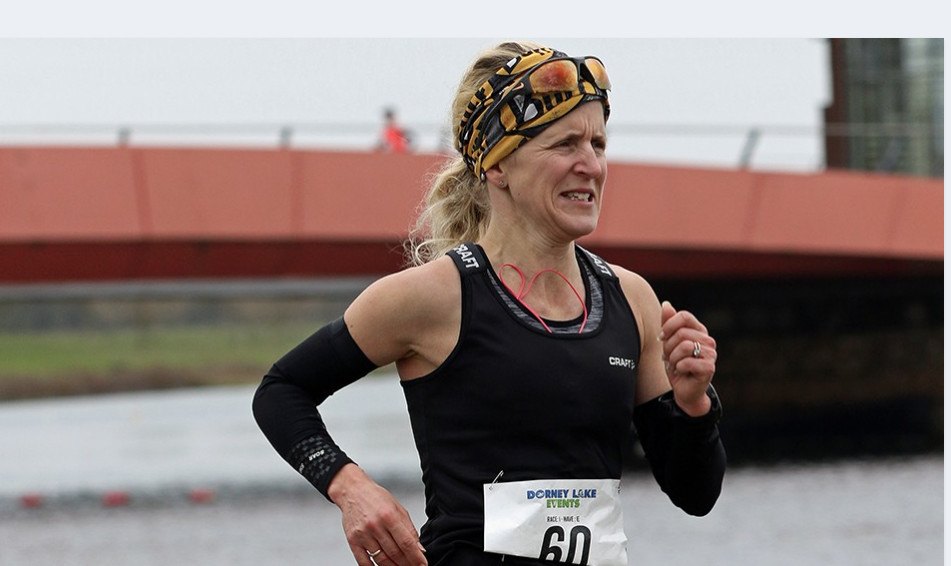 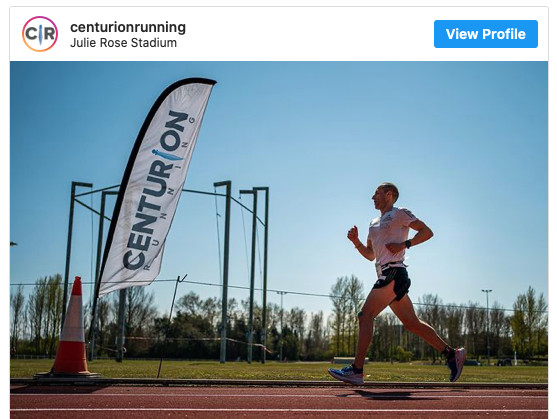 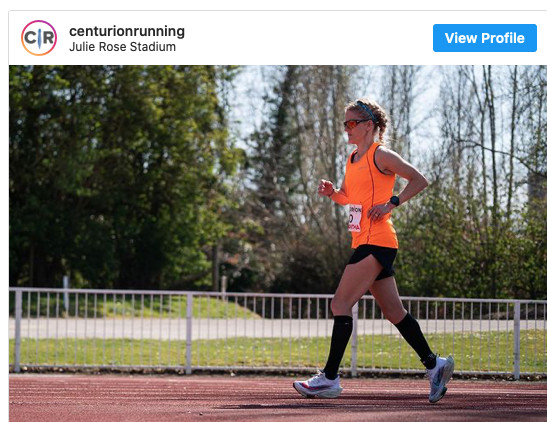 The Lithuanian, who won the IAU world 24-hour title in 2019 and who outside athletics works as a croupier in a casino, averaged 6:45 per mile (sub-3hr pace) for his 100-mile effort. This was despite having to finish his final preparations on a treadmill due to being quarantined in the UK on the eve of the race.

He celebrated by striking a Usain Bolt-esque lightning pose on the track and then watched Amend break a national record.

Robinson ran 14:43:40 at Milton Keynes in 1990 but Amend broke that mark by almost nine minutes as she finished under floodlights at the Julie Rose Stadium.

Amend, who works for an IT company and races for Belgrave Harriers, has clearly been building into good form after winning the Dorney Marathon in 2:52:36 at the start of April. 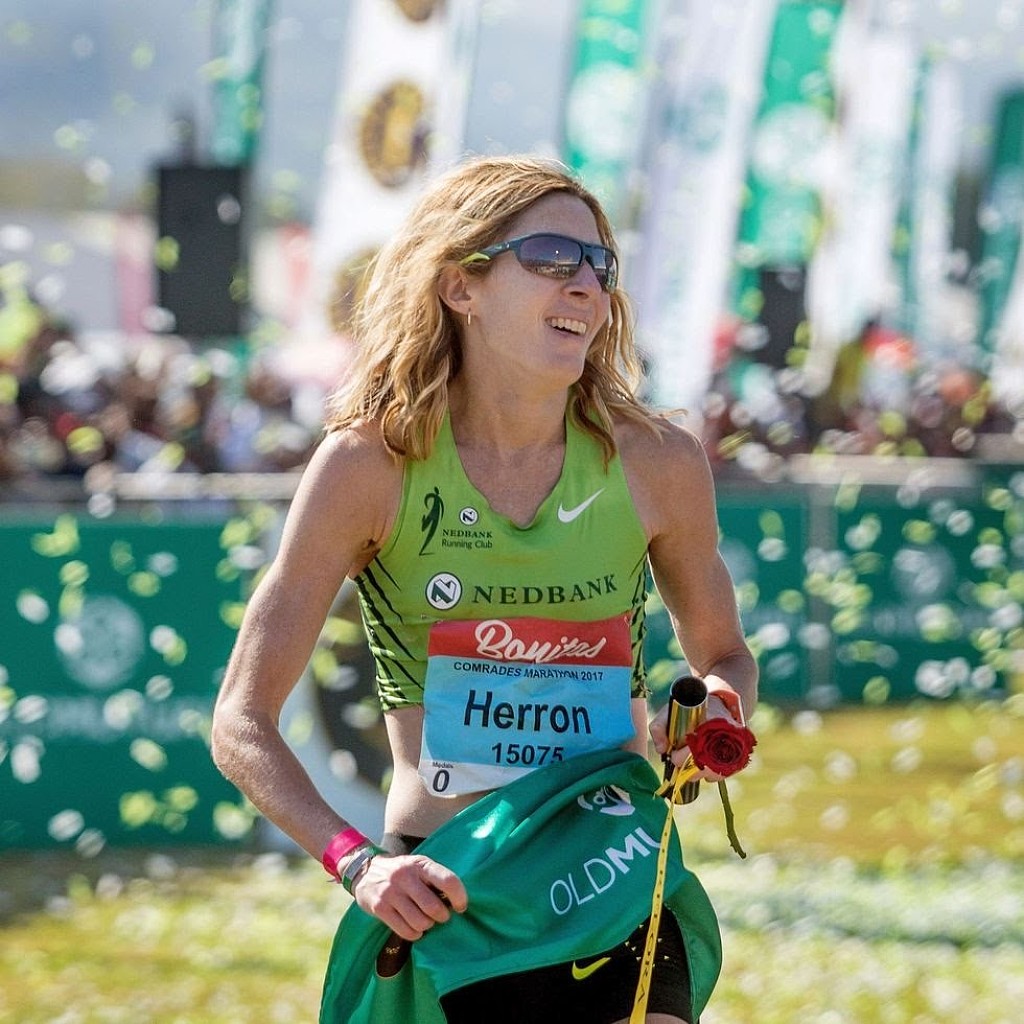 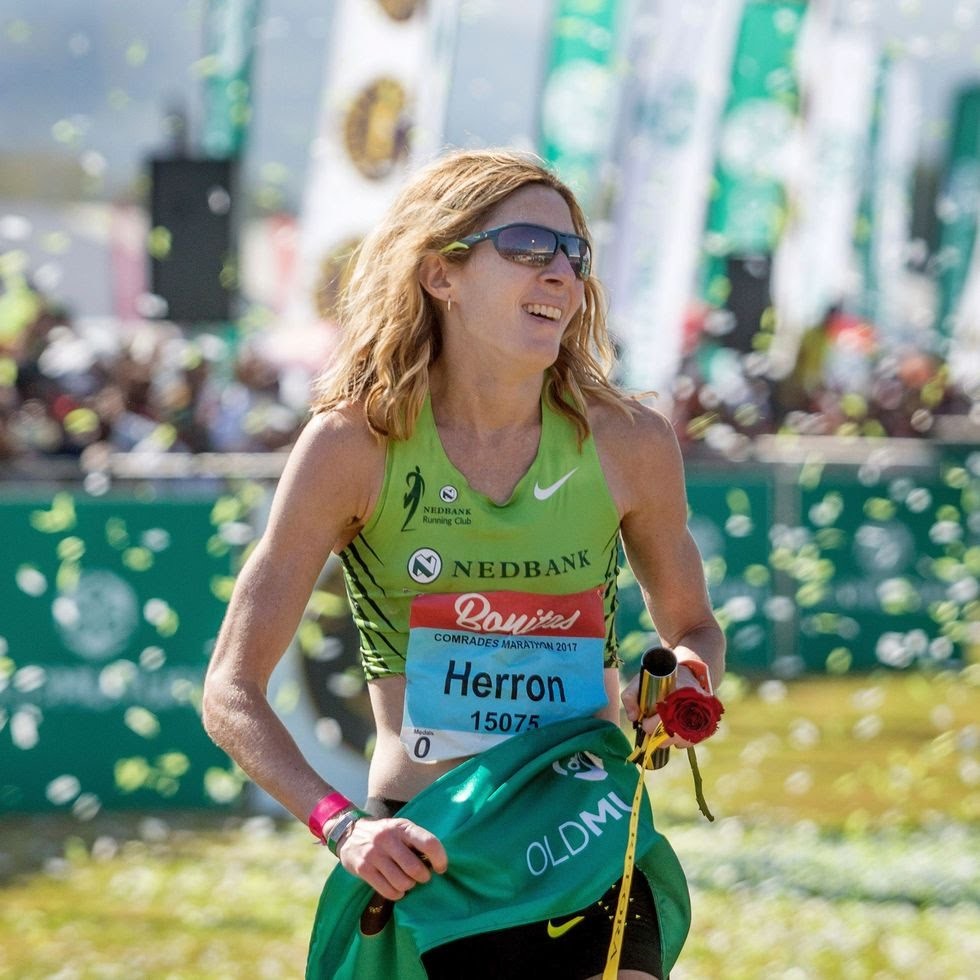 With her performance in Albi, France, on Sunday, ultrarunner Camille Herron came back strong after a hamstring injury forced her to drop out.

She achieved a world best for the most distance covered in 24 hours on her way to winning the International Association of Ultrarunners 24-Hour World Championship. 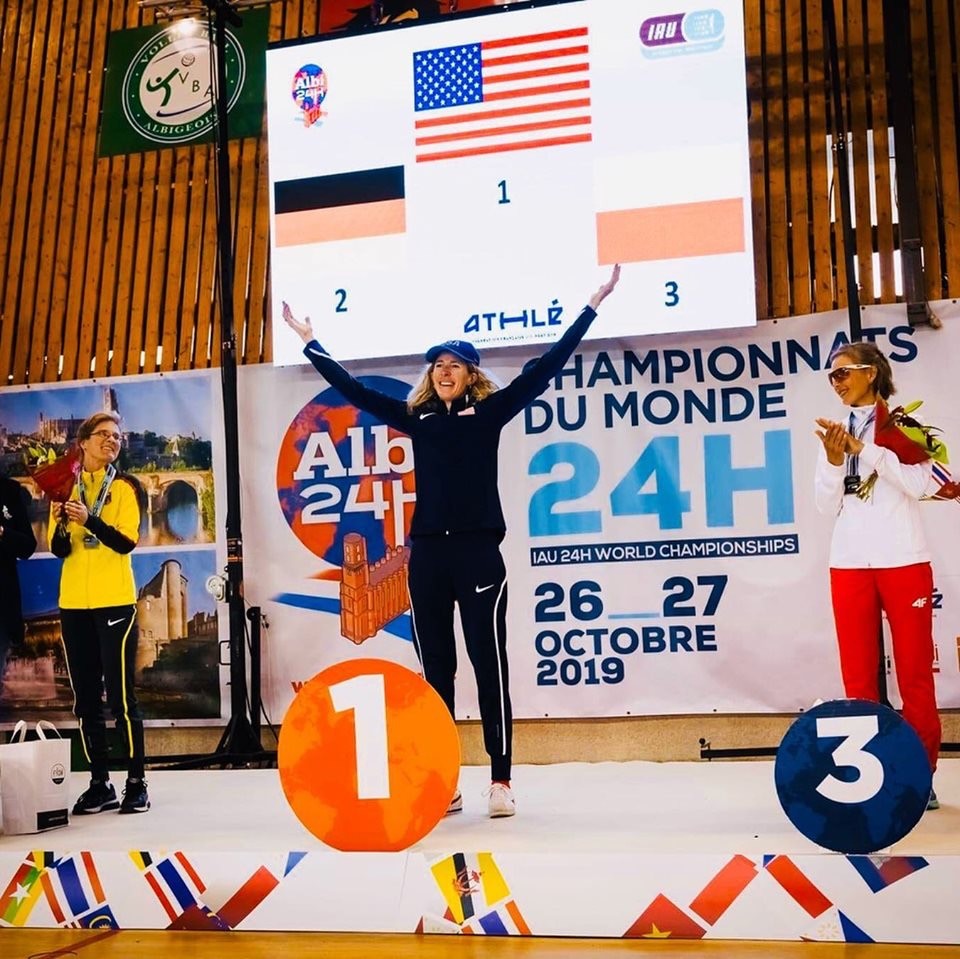 Herron, 37, completed the challenge by running 270.116K (167.842 miles) in a span of 24 hours on a series of 1500-meter loops in and around the Terrain Honneur Stadium. This is an average of 8:37 per mile.  Pending ratification, the ultrarunner’s performance is the record for the most distance covered in a day for women.

Less than a year ago, Herron broke the world record for the 24-hour run on the track, which made her the favorite heading into Sunday’s race. She established herself up front early on, taking the lead in the first lap and maintaining her top position for the entire race.

Around the halfway point, she almost caught men’s race leader Aleksandr Sorokin of Lithuania, according to the International Association of Ultrarunners (IAU).