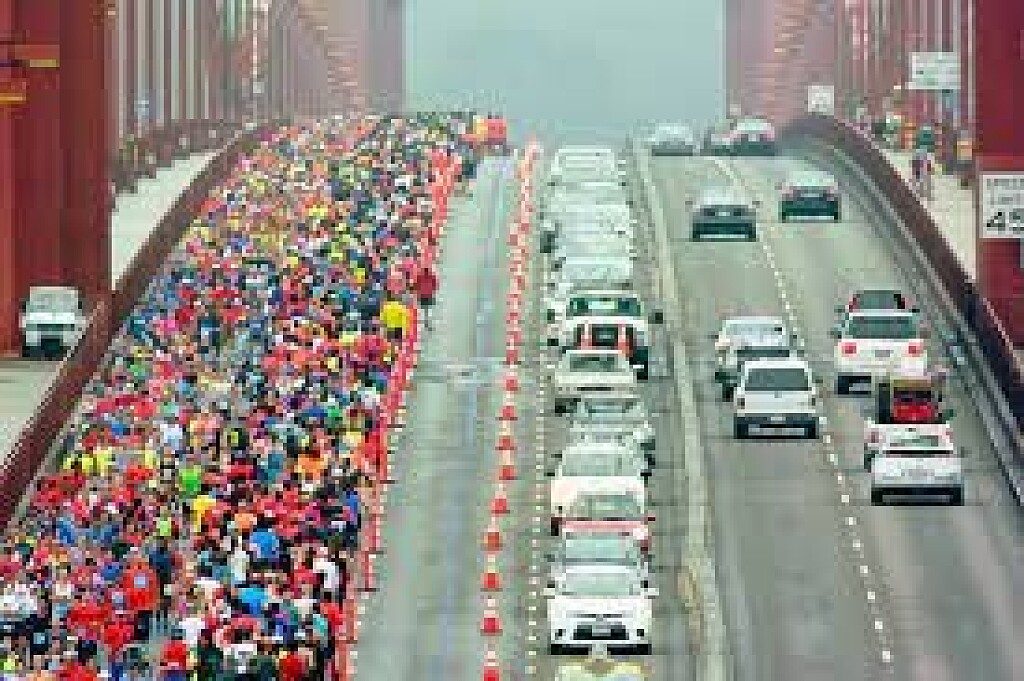 On Friday thousands came to pick up their race bags at Fort Mason's Festival Pavillion.

"San Francisco is special there are a lot of uphills so I think it will be a super challenge," said Pedro Morando, who came from Mexico. 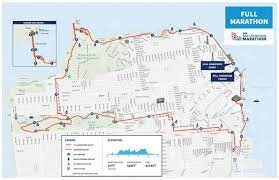 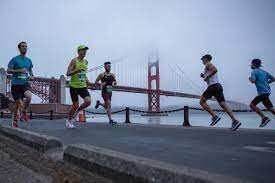 "Just glad to be back in full force on our 45th anniversary," said Christiian Abrahamsen, one of the SF Marathon organizers, "People are able to travel again or more willing to travel again so that has definitely bumped the numbers up."

New this year, the marathon will be the first in California to have male, female and non-binary gender categories.

"Just giving everybody a chance regardless of what you affiliate yourself as, just knowing it's a safe place to be and we're happy and excited to have you there," said Eileen Nichols, a San Francisco resident who plans to run.

"I think it's great to get the kids involved. I think physical fitness is very important," said Sharon Chang, a San Francisco mom who was registered with her husband and four-year-old daughter.

The marathon is also partnering this year with sponsor Degree to include a special team of runners with disabilities.

"I was diagnosed in 3rd grade with a degenerative eye condition...I lost my sight at 30," said Michael Zampella of Philadelphia.

Zampella is on a team with a woman from Houston who has multiple sclerosis. They plan to finish their first marathons on Sunday.

"We work so hard just to do basic things so to do something extra like a marathon is crazy difficult but so worth it," said Sagirah Ahmed Norris of Houston who struggled with MS.

Vendors say they're glad to be back. They say they have missed the marathon events which often brings new business, but they say running has become more popular than ever.

"There were more and more runners because people weren't going to gyms, so running sale shoes are booming during the pandemic," said John Zilly, co-founder of Vimazi, which was started in 2019 making special running shoes.

Some people say with the pandemic still not over, they don't want to run the risk of catching Covid. Some say they'll be bringing a mask to the starting line.

"I am a little bit worried about COVID still," said Maricar Montano, an SF Marathon pacer who came from Hong Kong to run.

"It's going to be about thirty minutes of just standing around in a big crowd," said Montano, who says she'll likely remove the mask once she starts running and the crowd thins out.

Masks are not required on the course this year.

The marathon starts at 5:30 a.m. Sunday and residents are advised to watch for road closures. 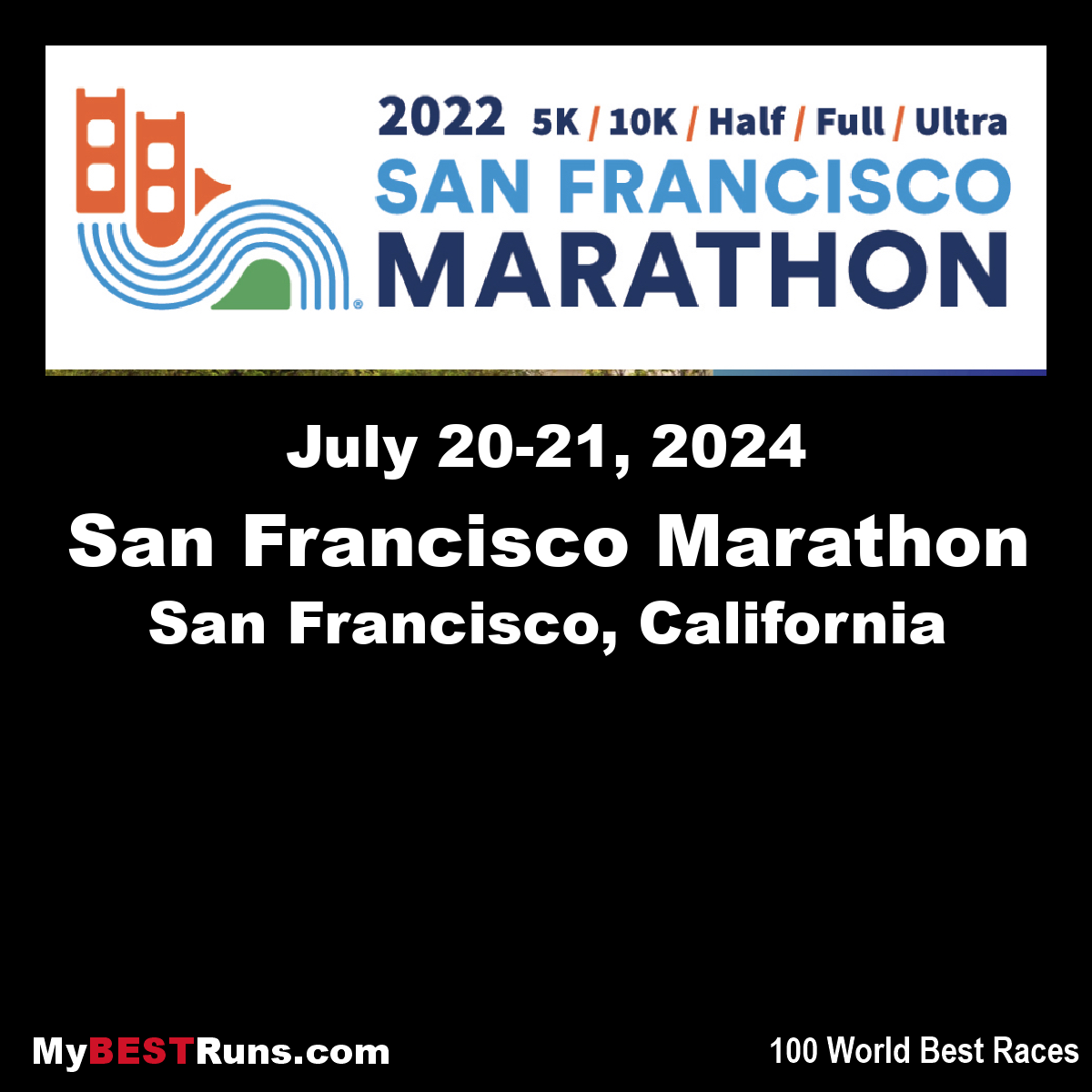 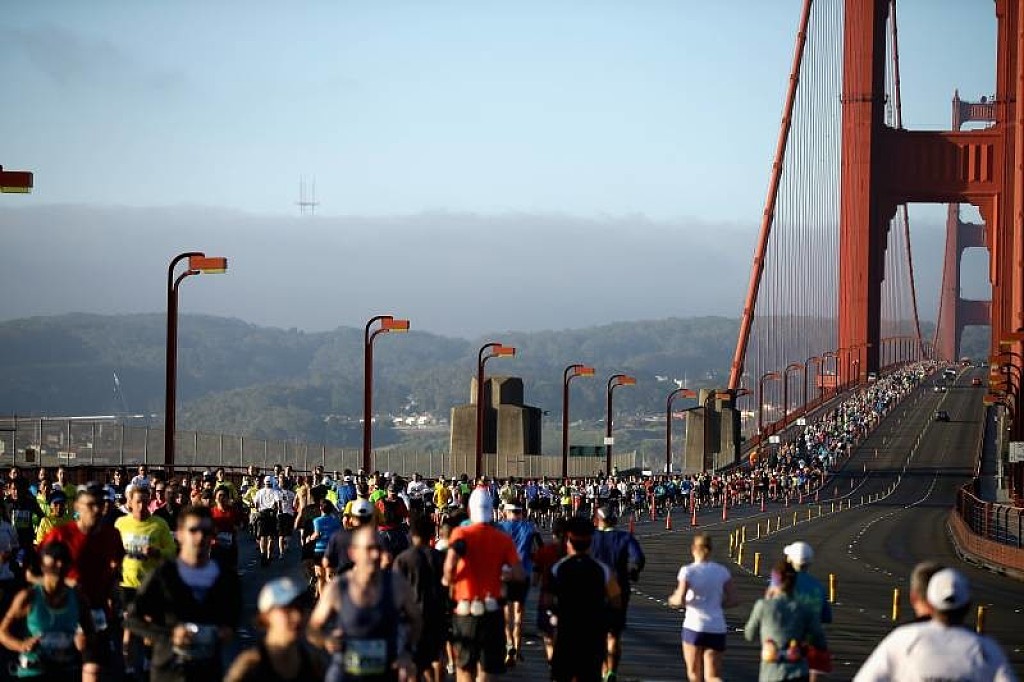 We have all been watching as the COVID-19 global pandemic continues to evolve and affect every aspect of our lives right now. In order to prevent the spread of the illness and to not overwhelm the healthcare system around the world, governments have taken a wide array of measures including limiting large scale events.

The City and County of San Francisco has led the charge and helped flatten the curve, yet there is still more to be done and the health and safety of our participants, staff and volunteers is always our first priority. Following further discussions with the City and County of San Francisco, we have made the decision to reschedule the San Francisco Marathon to November 15, 2020. We are grateful for the support of the City and County for their flexibility and assistance in selecting this new date to ensure our runners can still enjoy this iconic City event. We are working to implement new race day safety measures that we will share over the coming months. 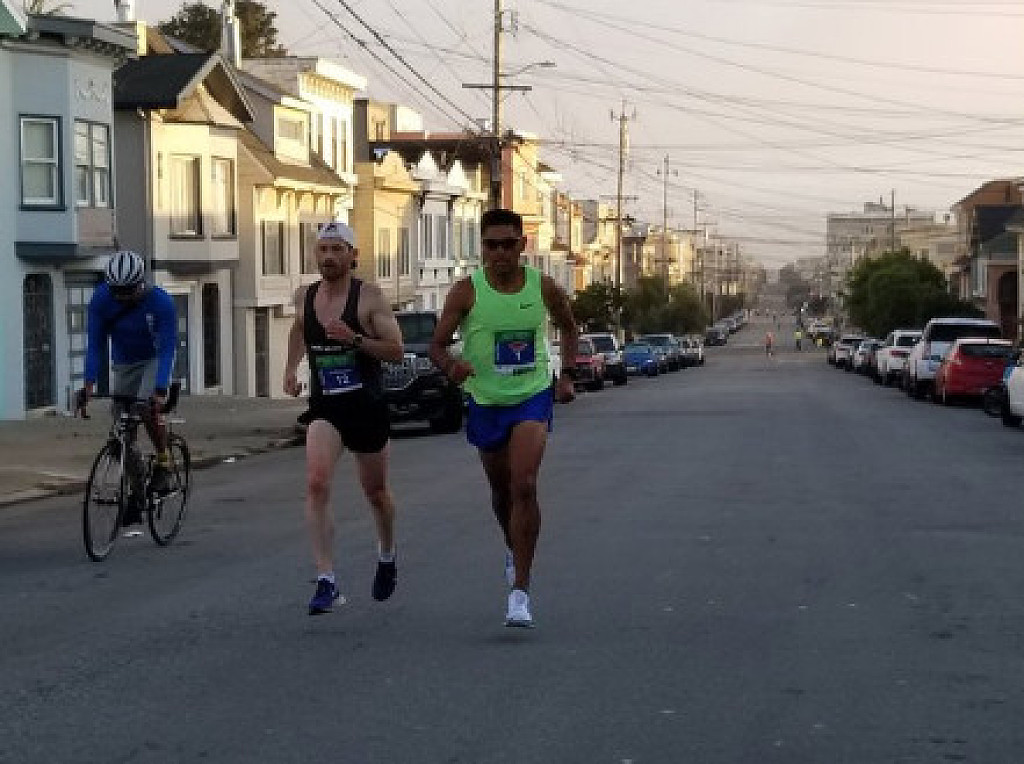 There is a new men’s champion at the San Francisco Marathon for the first time since 2016. 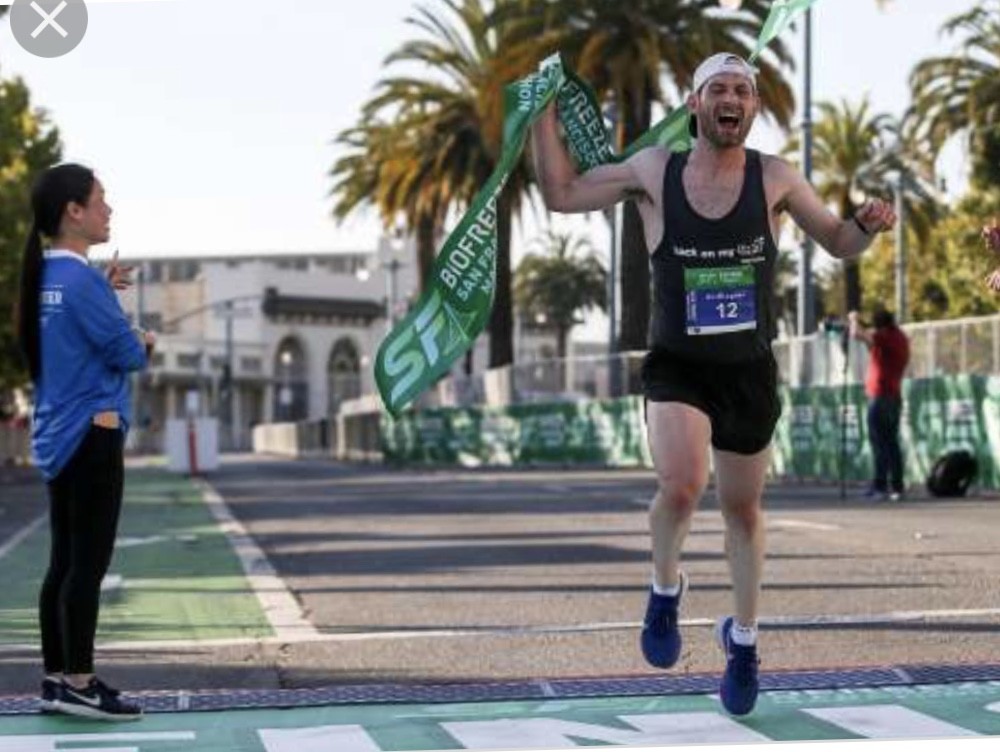 On the women’s side, Nina Zarina jumped out to an early lead and won without much drama with a time of two hours, 47 minutes and one second.

She completed the course well ahead of second-place finisher Eleanor Meyer (two hours, 52 minutes and 16 seconds) and the rest of the field. Zarina added another accomplishment to her 2019 resume after being named the female global champion at the Wings for Life World Run in Switzerland in May.

It appeared in the first portion of the race as if Maravilla would join her in the winner’s circle when he paced the field through the first 5.5 miles.

However, Billington pulled even by the halfway mark before turning on the jets and building a comfortable lead:

There would be no doubt from there, as the American maintained and added to his lead through the back half of the course and prevented Maravilla from three-peating in the Bay Area.

Billington, Zarina and the rest of the runners started at 5:30 a.m. PT at Mission Street and The Embarcadero on a 26.2-mile course, which is a Boston Marathon and Olympic time trials qualifying race. 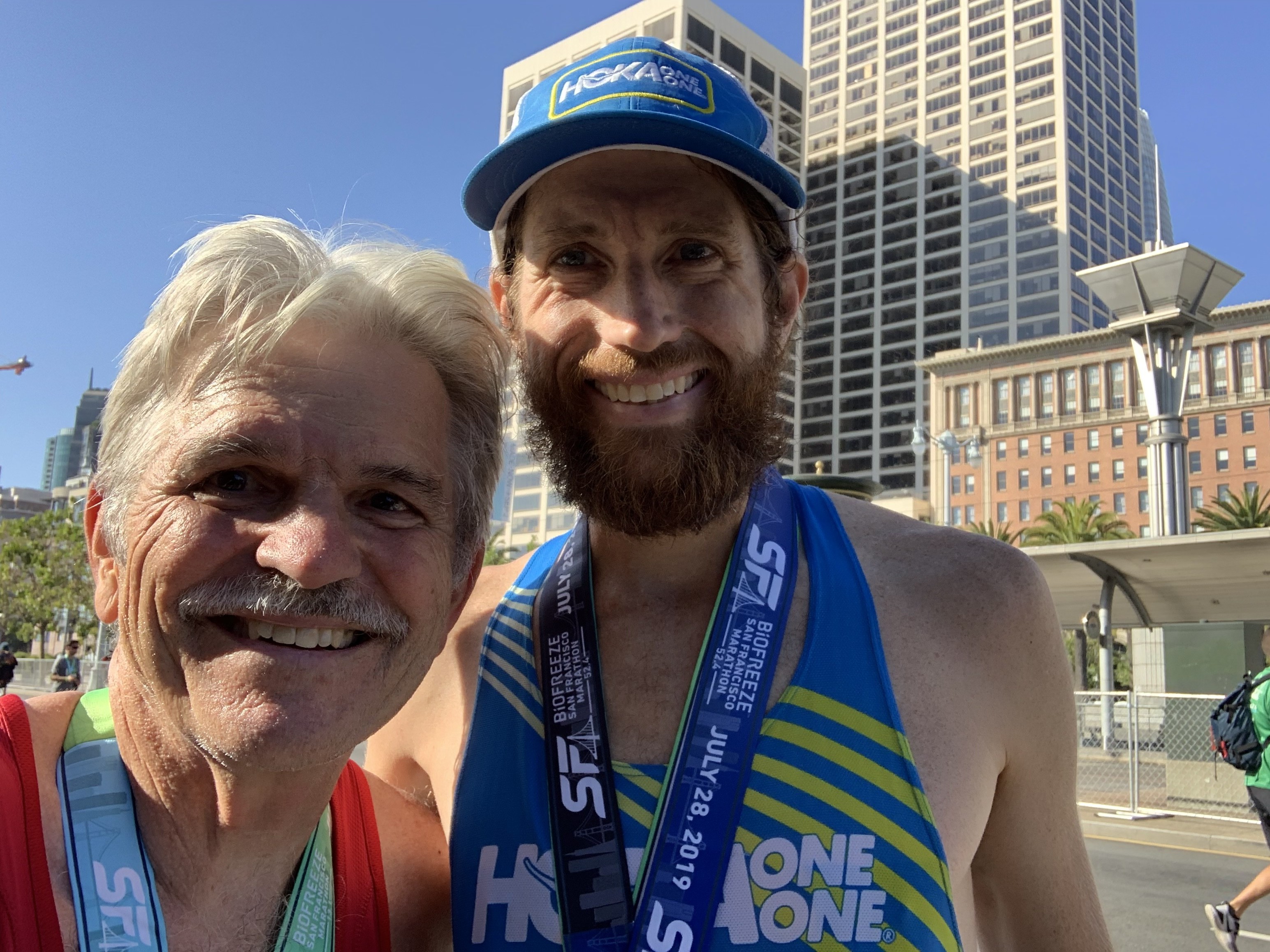 They dealt with a total elevation gain of about 1,175 feet in a city that is known for its hills, further testing their endurance and strength on a grueling course. 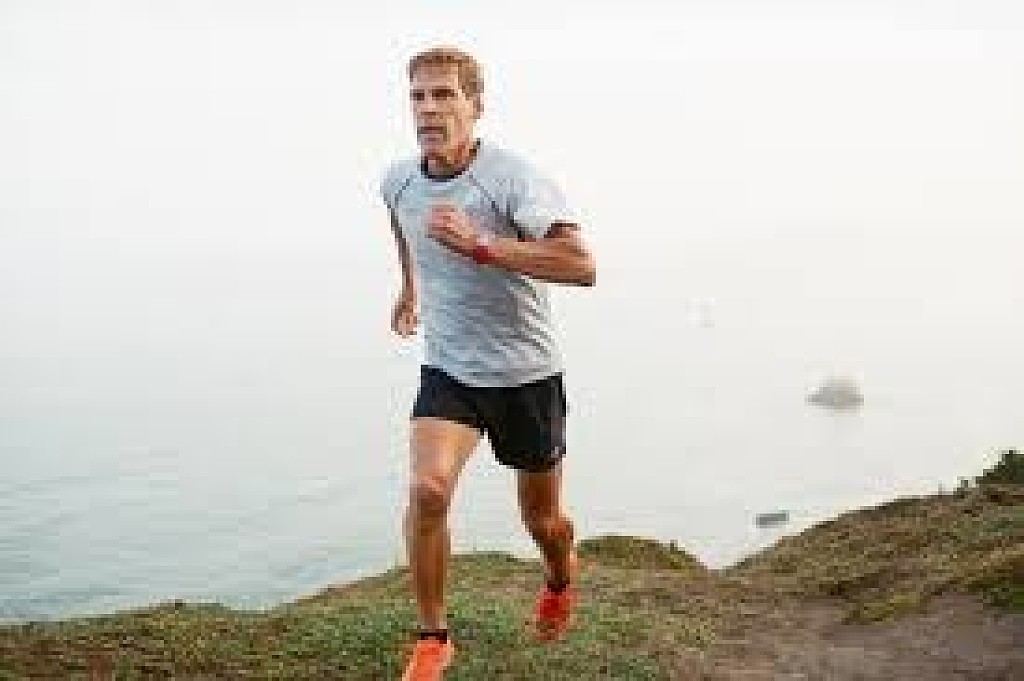 Dean Karnazes is set to run the San Francisco Marathon 52.4-mile ultra, an event he started years ago

The San Francisco Ultramarathon is two full marathons; certainly enough to warrant a ride home. Yet, on the day of the event’s first year, Dean Karnazes, one of its creators, ran about three marathons. Karnazes, who still resides on the Kentfield/Ross border, ran to the Embarcadero for the start of the inaugural ultra seven years ago. Following the 52.4-mile feat, he headed home, on foot, reaching the Golden Gate Bridge before the lure of a passing bus was too enticing. Altogether, Karnazes estimates he ran between 75 and 80 miles in the 12-hour period. Karnazes, who has watched the event grow from eight people in its first year, is one of about 100 runners set to embark on the San Francisco Ultramarathon, which begins at 11 p.m. Saturday. The ultra, originally titled “Worth The Hurt,” is a fundraiser, with participants either raising $1,000 for a charity of their choice or paying a higher entrance fee, donating the difference to the race’s featured charities. The first loop begins in front of the Ferry Building Marketplace. The course is the San Francisco Marathon backward — sans the trek over the Golden Gate Bridge into Marin County — and includes navigating through overflowing bars in the Mission District and Haight-Ashbury. Runners finish, eat, change into dry clothes and often nap, then join the 9,000 marathoners at 5:30 a.m. There are expected to be 27,500 total participants in the ultra, marathon, both half marathons and 5K. “It’s been remarkable,” Karnazes said. “I still can’t believe that we get about 100 participants now at the race. We don’t really advertise it too much; it’s more word of mouth. Ultramarathoning is still very grassroots. I don’t think we’ll ever see it as a mass-participant event. “Dare I say it: it’s actually very fun.” Karnazes, 55, one of the most decorated ultra runners in the world, has proved his definition of fun differs from most. (07/27/2018) Views: 1,513 ⚡AMP