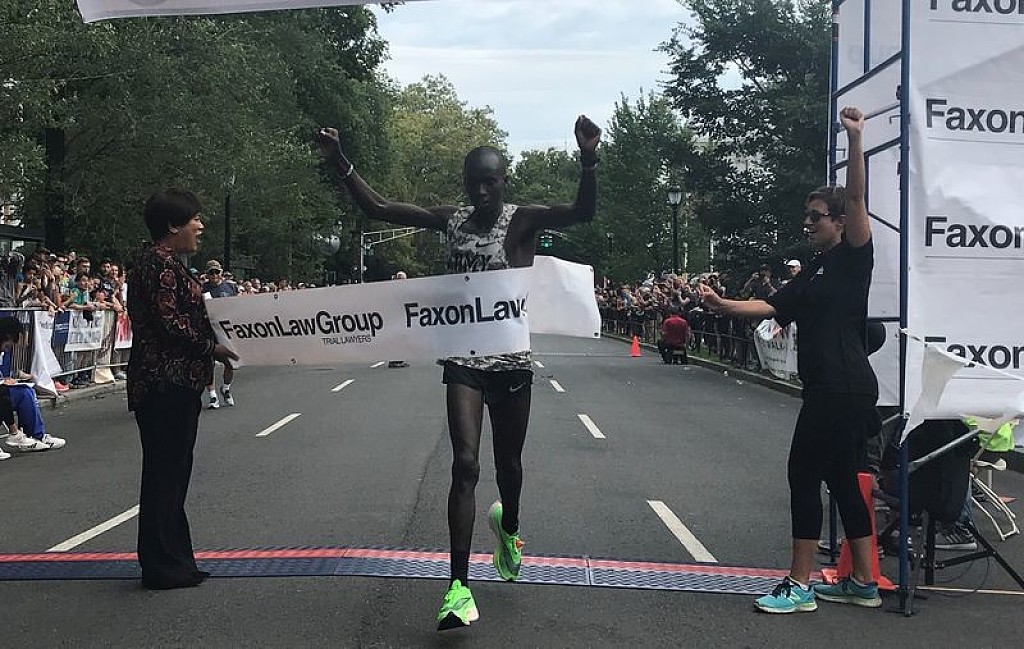 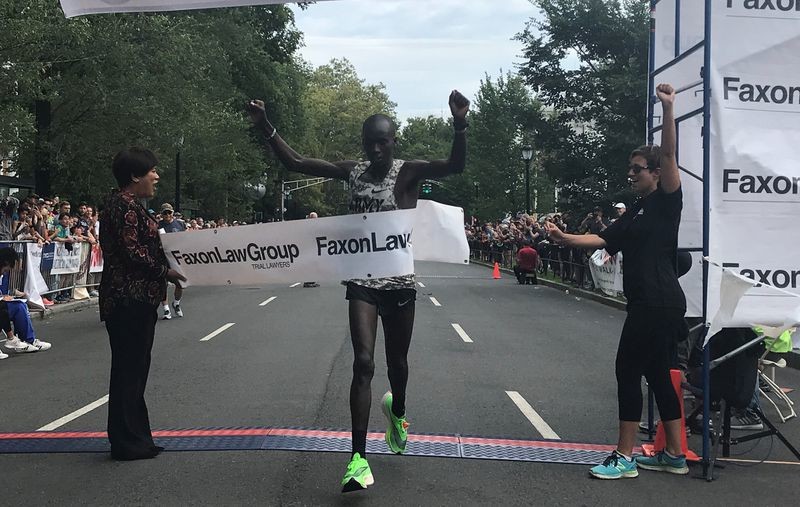 A few weeks ago, Leonard Korir became the first American man in three decades to win the Falmouth Road Race.

He’s still on a roll – on Monday, Korir pulled away after the third mile at the Faxon Law New Haven Road Race to win his third 20K USATF championship on a cooler than usual Labor Day in 59:06. 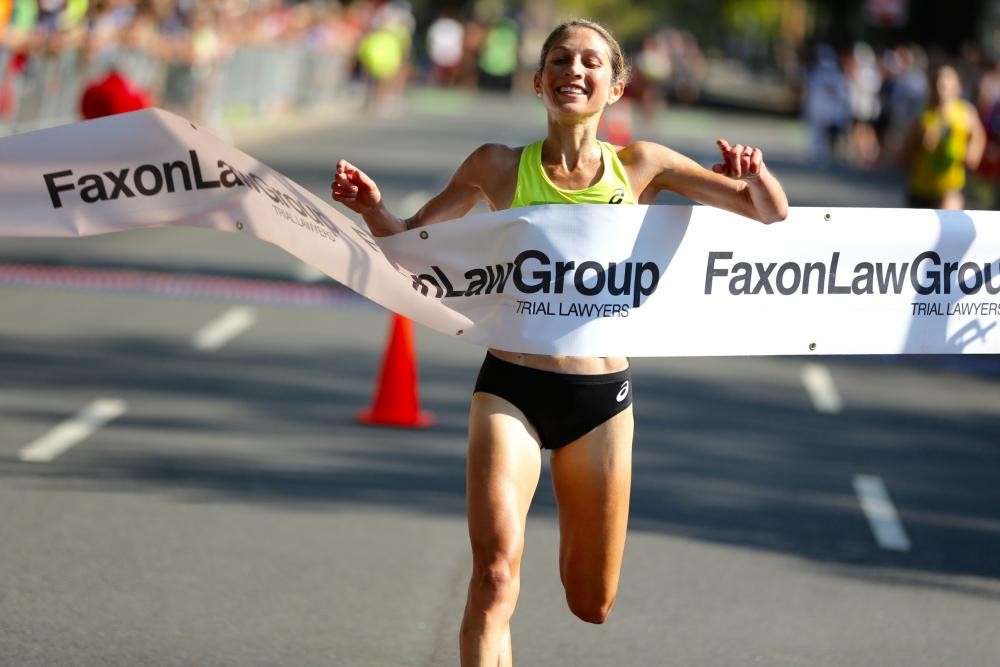 “I’m feeling very, very good,” Korir said. “I had a good race in Falmouth. That gave me motivation that my fitness is good, so I said, ‘Let me go again to this race and maybe push myself to know if I’m consistent.’” 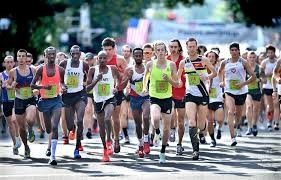 “It was so fun to be out here again,” said Hall, 36. “This race is really tough. Last year, I couldn’t even run marathon pace. It’s really encouraging to be able to run a good amount faster. I have my sister and her kids out there cheering, they live right on the course. That gave me a big boost.”

It wasn’t as humid as it usually is for the day of the annual race, with temperatures in the low 70s.

“Compared to last year, today was better,” Korir said. “It was just windy.”

Luke Puskedra, who retired from running competitively in the spring to open a real estate business in Eugene, Oregon but decided to come and run New Haven, and Parker Stinson, the national 25K record holder, led a large pack in the 20K early on but Korir took the lead after the pack went through the third mile in 14:11 and he just kept extending the lead.

Korir went through the halfway point in 29:21 and the trailing pack was over 30 seconds behind him but although he had a big lead, he was still not on pace for the race record (57:37 set by Khalid Khannouchi in 1998).

“It’s tough,” Korir said of the record. “You have to have good weather and no wind coming on your face.” 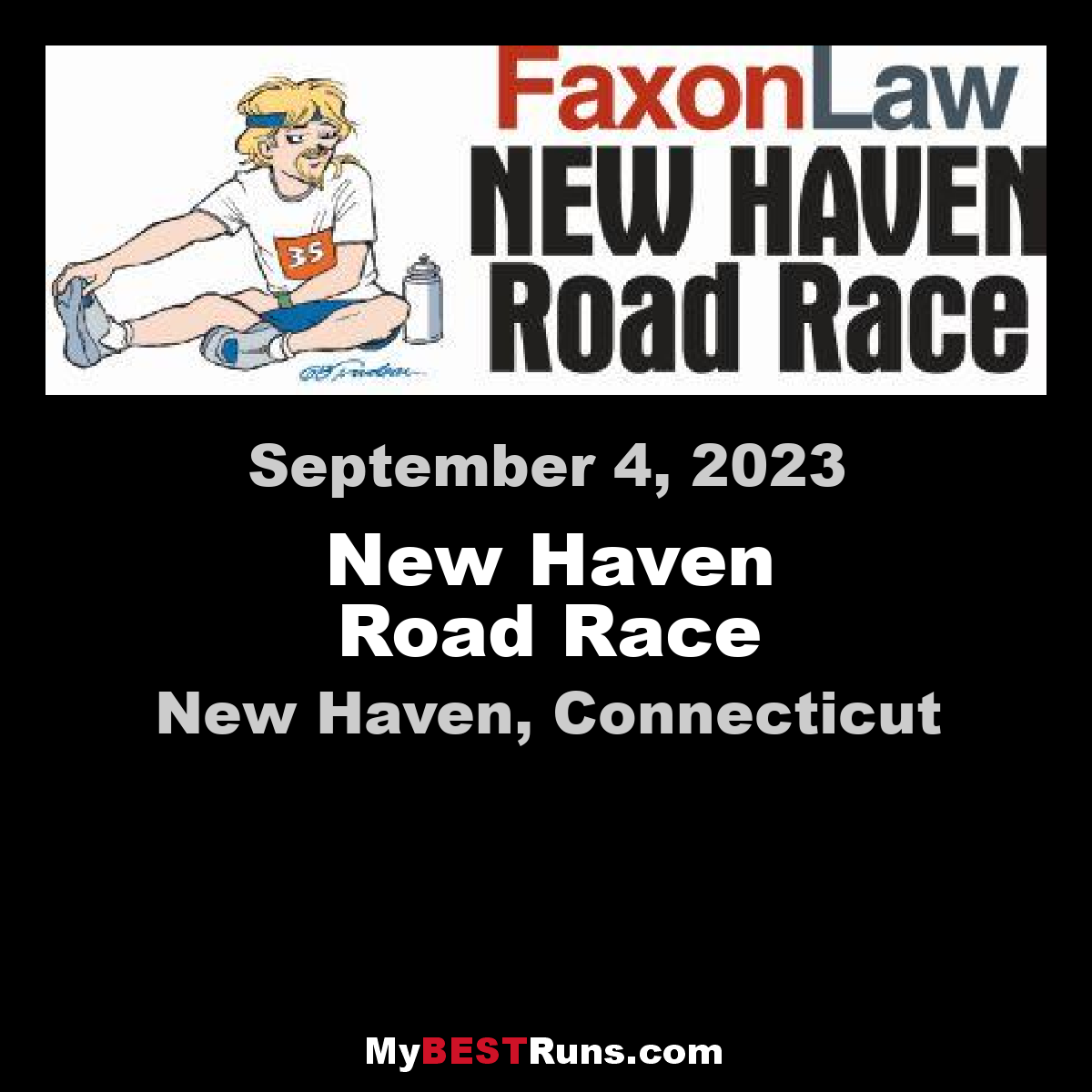 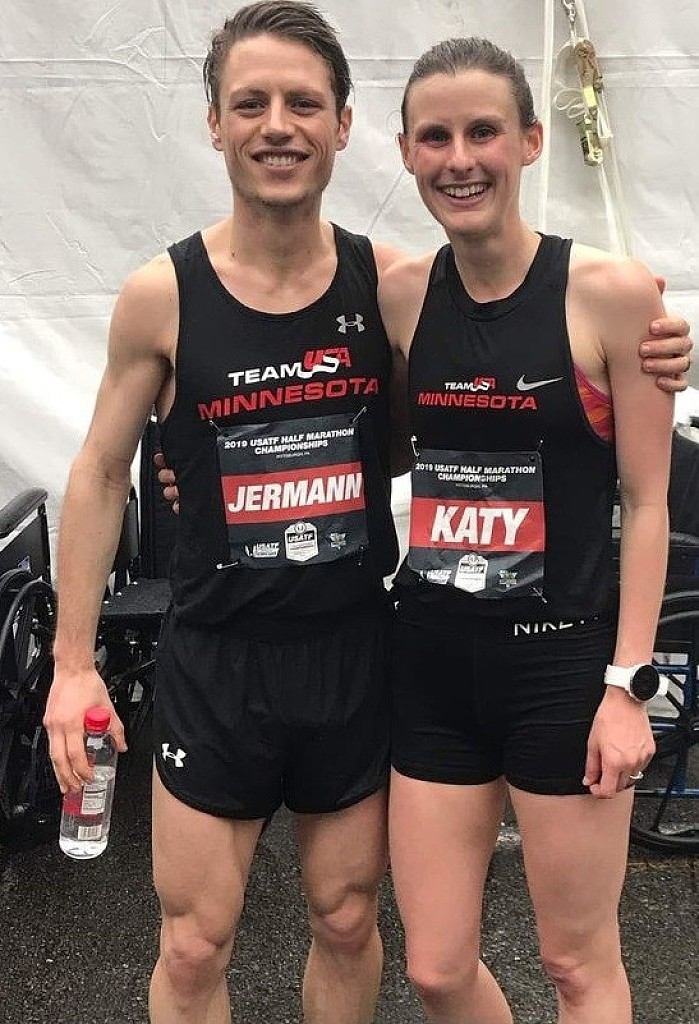 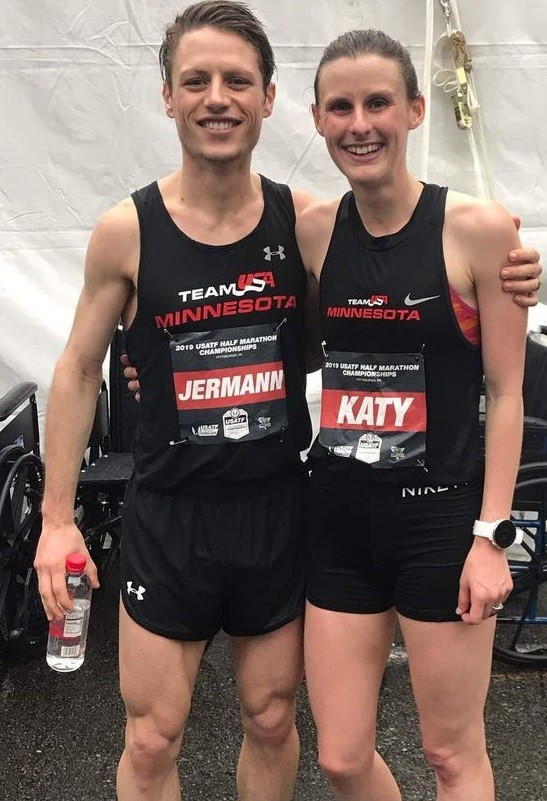 Katy and Tyler Jermann got married last summer, they train together and now are set to Run the Faxon Law New Haven 20K

They are on the same running team in Minnesota. They run the same races. They are a little competitive with each other.

“We get a little competitive with our times,” Tyler said. 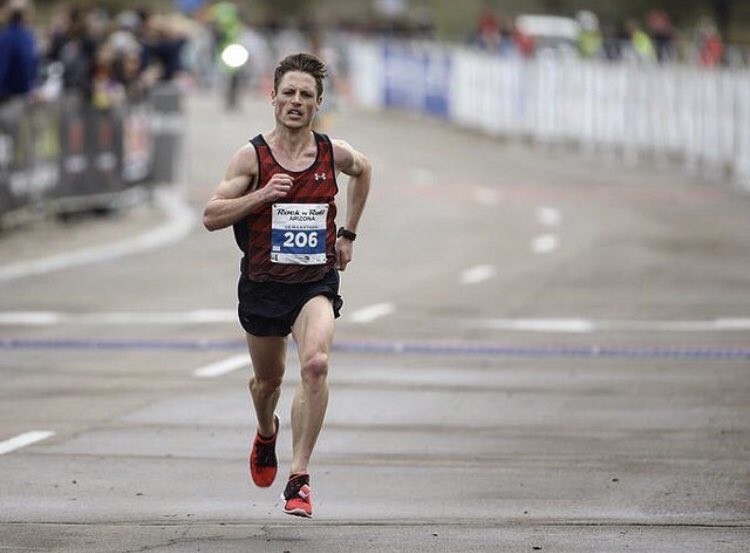 “If it’s anything under a half-marathon, she wins, usually,” he said. “Anything longer, I win. 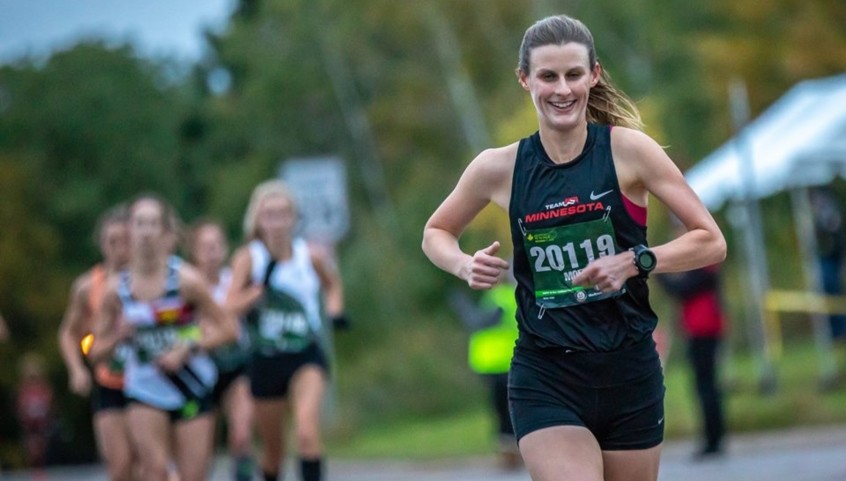 “We’ve been doing it for a year or two. Katy had a big injury two years ago but she’s on the comeback. We had to adjust the conversion. It started off as a minute [per mile] but now it’s not fair anymore.”

So Katy, 27, may have the edge at Monday’s Faxon Law New Haven Road Race, which is the 20K USATF national championship (8:30 a.m. start, New Haven Green).

Both are training for the New York City Marathon in November and both have qualified for the Olympic Marathon Trials Feb. 29 in Atlanta.

Katy qualified in her marathon debut in Houston in January, running a negative split (78 minutes the first half and 75 the second) to go under the “A” standard (2:37) for the trials, finishing in 2:33:41. It turned out to be a great day for the Jermanns as Tyler also ran under the men’s “A” standard (2:15) with a personal best of 2:13:29. Both finished ninth in their respective races.

“It was great,” Katy said. “I loved it. I was very conservative. I wanted to make sure I could walk away from the marathon knowing that I loved it and wanted to do more and felt confident about the distance.”

It was Tyler’s 13th marathon and his fifth attempt at trying to get the “A” standard.

The two met while running at Iowa State, where Katy was a Big 12 champion in the 5,000 and 10,000 meters, but they didn’t really become friendly until after graduation. They reconnected at a training camp in Flagstaff, Ariz., started dating in January of 2017 and were married last summer.

They live outside of Minneapolis and train with Team USA Minnesota.

“We have the same running schedules and the same workouts,” Katy said. “We can do our warmup together with the team. Then he goes and does his run and I do mine.

“It’s neat to be able to share our stories. If I was tired and he was also, it’s nice to have that camaraderie – like it’s normal to feel tired today. It’s nice to go through that together.”

Tyler’s half-marathon personal best is 1:03:31; Katy’s is 1:10:27. She hopes to be in the top three at New Haven. Last year’s winner Sara Hall is the favorite in the women’s field, while two-time men’s winner Leonard Korir is the favorite to win the men’s title. Korir became the first American since 1988 to win the Falmouth Road Race earlier this month. 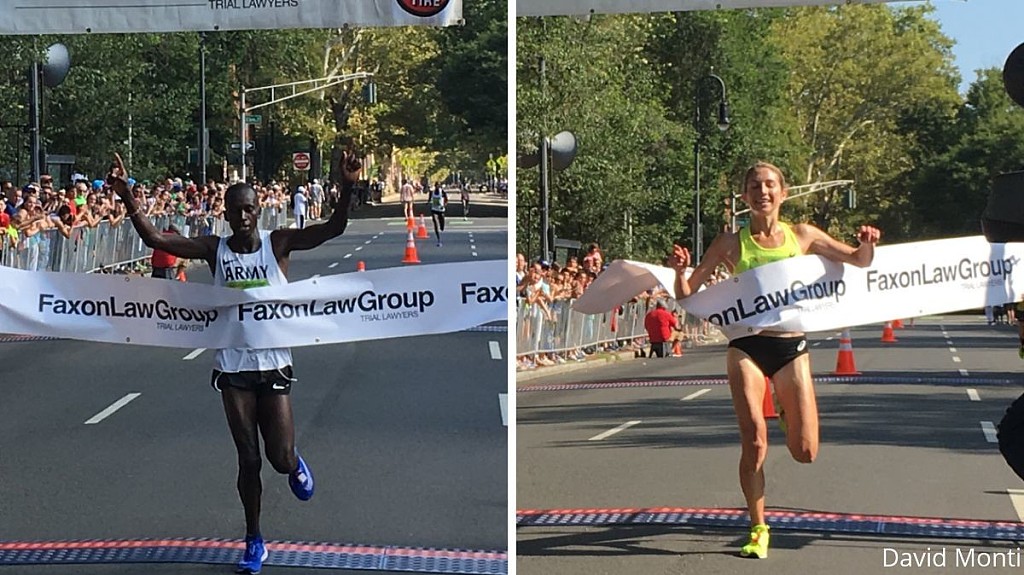 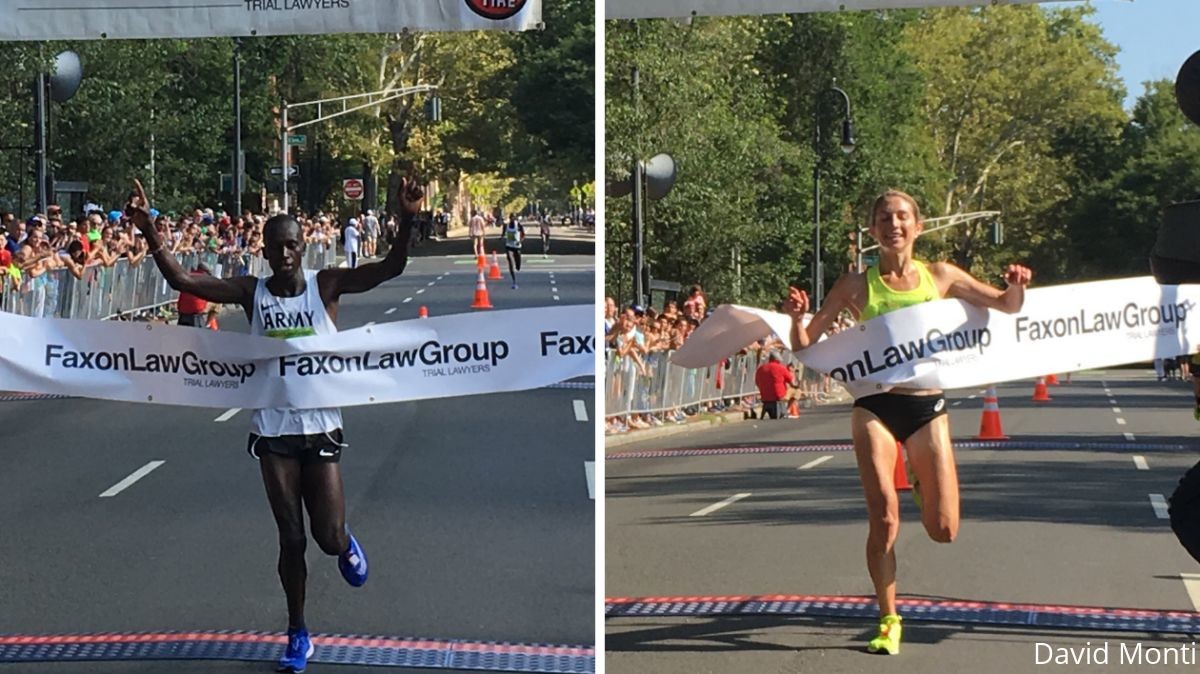 The last two years, Leonard Korir had churned furiously toward the finish line of the Faxon Law New Haven 20K road race, stride for stride with a fellow competitor. In 2016, he outkicked Sam Chelanga to win the USATF 20K national championship. Last year, he sensed that Galen Rupp might have been tiring due to his marathon training but Rupp had one last lean in him and edged past Korir at the tape. But Korir was injured at the start of the year, and he’s still coming back. He wasn’t particularly confident in his kick. And so there was no finish line drama Monday, at least for the men’s race. Instead, Korir pulled away from Haron Lagat and Kiya Dandena on a long downhill in East Rock Park around Mile 10 and won his second 20K national championship in 1:00:17. Lagat finished second in 1:00:29 and Dandena third (1:00:34). There was a kick finish in the women’s race, though, with Sara Hall outlasting Allie Kieffer in the final straightaway. Hall won in 1:09:04, Kieffer was second (1:09:20) with Emma Bates third (1:09:42). Timothy Grogean of Woodbury won the half-marathon (1:10:59), and Rolanda Bell of Laurelton, N.Y., was the top female (1:23:57). Matthew Farrell of Glastonbury was the 5K winner (15:19), and Jennifer Sober of Jupiter, Fla., was the women’s winner (18:19). It was a hot, humid day, and times were slower.  “Today was so hot,” said Korir, 31, of Colorado Springs. “We were sweating until you can’t sweat anymore.” (09/03/2018) ⚡AMP 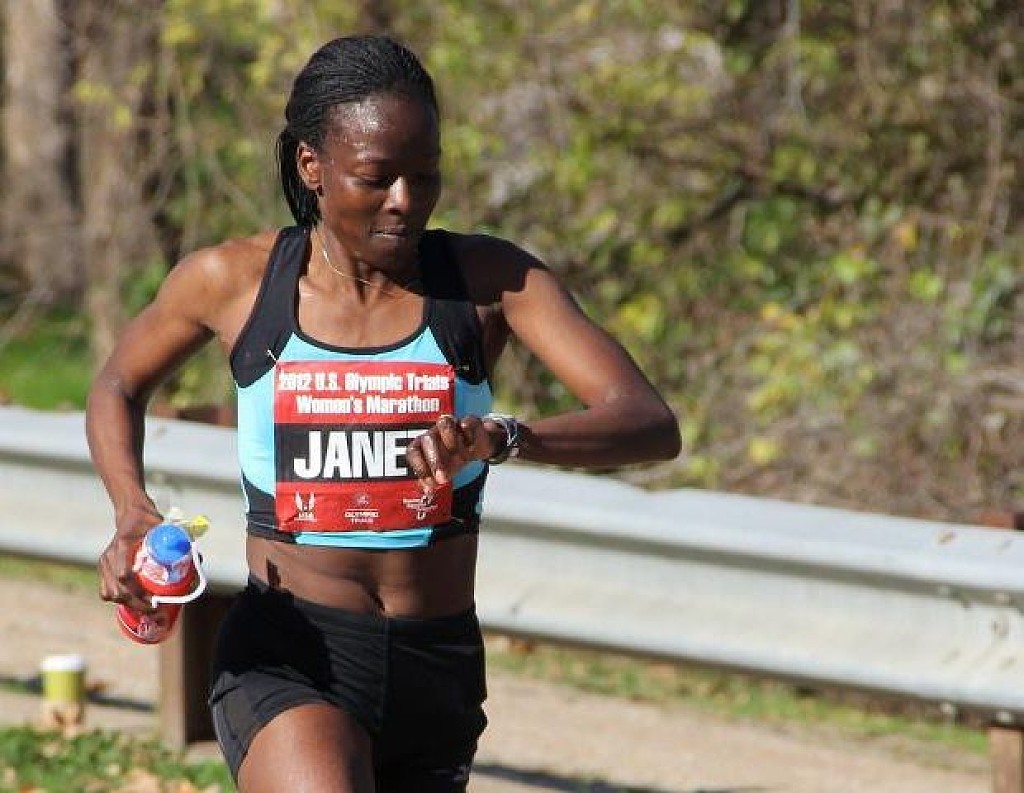 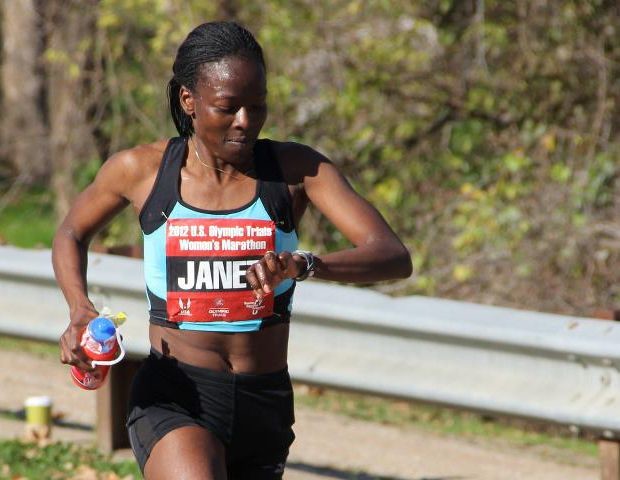 This year’s Faxon Law New Haven Road Race boasts a number of the country’s top runners, who will compete for a prize purse of more than $40,000 Labor Day at the New Haven Green. The event has played host to the USATF 20K National Championship since 1992. Past Faxon Law New Haven 20K champions Janet Cherobon-Bawcom, Meghan Peyton and Aliphine Tuliamuk head the women’s race field. Georgia’s Cherobon-Bawcom won the 2011 race and finished 12th in the 10,000 meters at the 2012 Olympics. New Mexico’s Tuliamuk, the 2016 champion here, will also be competing. She holds nine national road race titles. Peyton was the 20K winner in 2013. She competed at the 2012 and 2016 USA Olympic team trials and has been a member of four USA National teams. California’s Sara Hall, a 2017 USATF Marathon champion, who placed third at last year’s New Haven 20K, will also compete. New York’s Allie Kieffer is also expected to finish near the top. She was sixth in last year’s Faxon Law New Haven 20K and was fifth in last year’s New York City Marathon. (08/28/2018) ⚡AMP 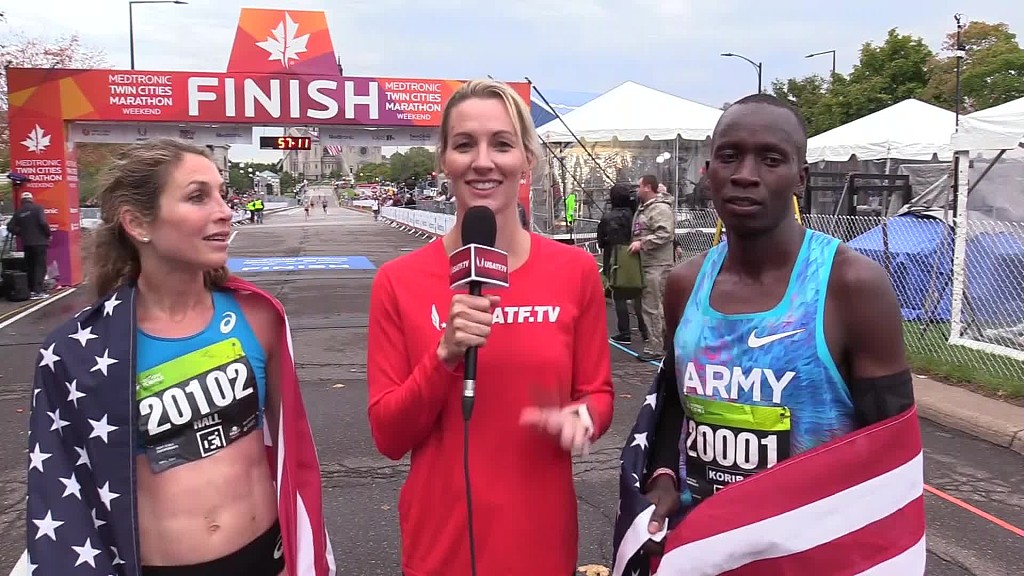 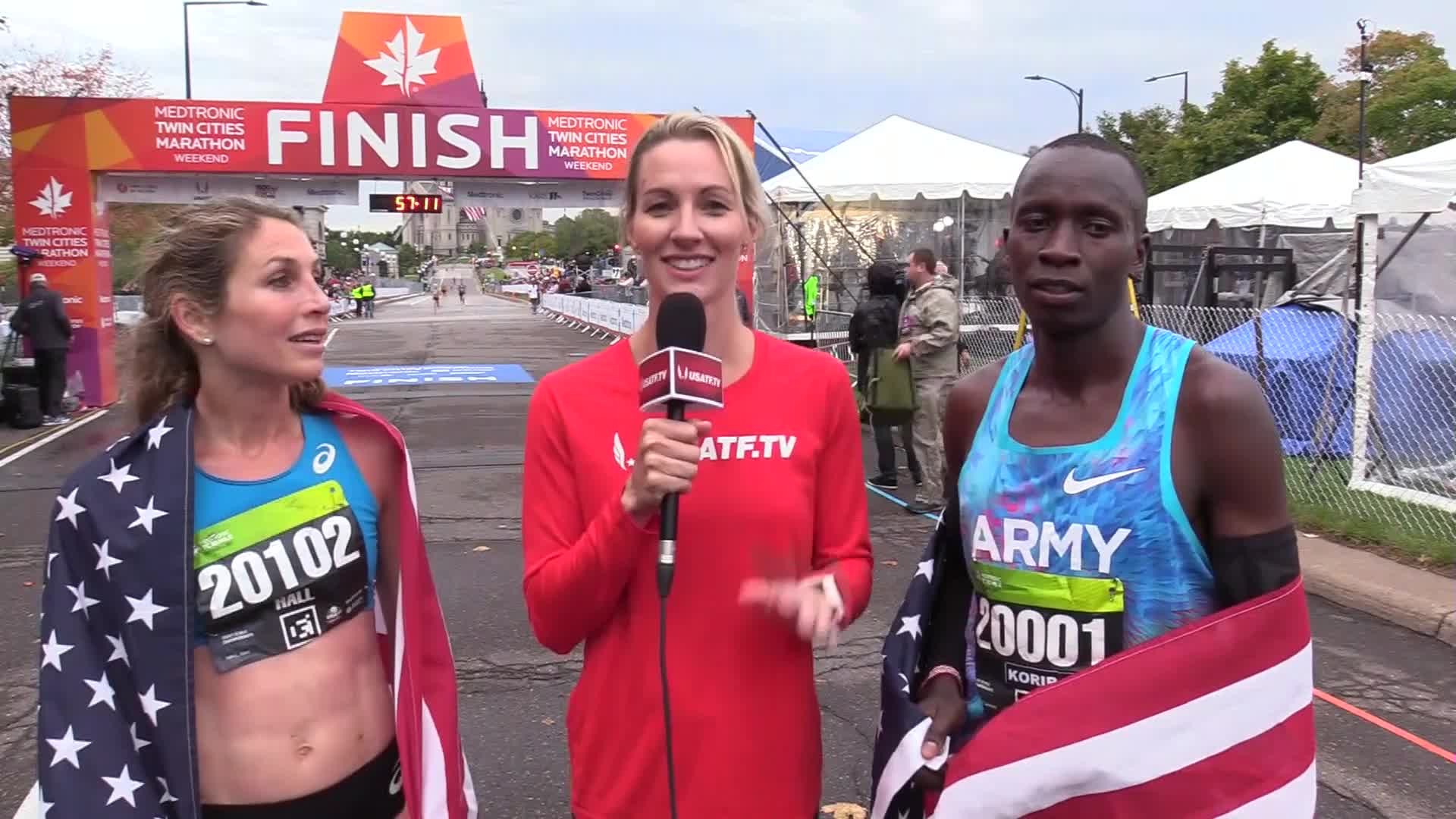 Some of America’s top distance runners will compete for a prize purse of over $40,000. New Haven has hosted the USATF 20K National Championship since 1992. Past Faxon Law New Haven 20K champions Janet Cherobon-Bawcom, Meghan Peyton and Aliphine Tuliamuk head the women’s race field.

She has competed at the 2012 and 2016 USA Olympic Team trials and has been a member of four USA National Teams. Another notable athlete competing on Labor Day is California’s Sara Hall. Hall is a 2017 USATF Marathon champ and placed third at last year’s New Haven 20K.

Currently, Colorado’s Leonard Korir is the men’s favorite. He won the 2016 race and lost in a lean to Galen Rupp in last year’s race. Korir competed in Rio Olympics in the 10,000. Korir will be challenged by Colorado’s Sammy Kosgei, Connecticut’s Donn Cabral, North Carolina’s Christo Landry and Massachusett’s Tim Ritchie.