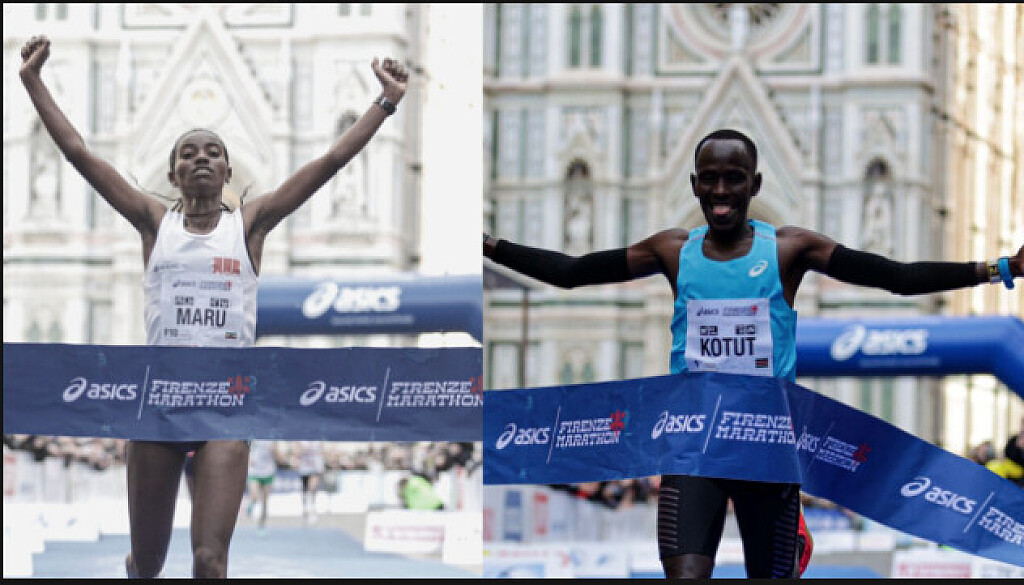 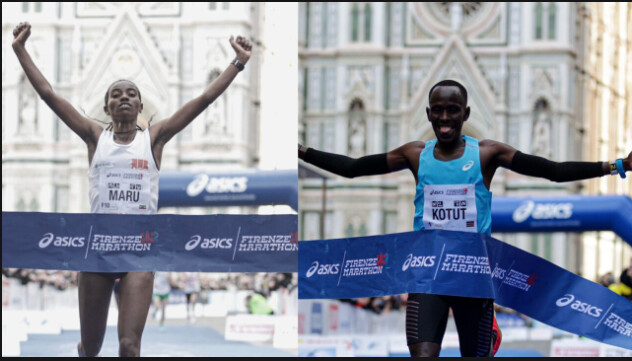 Kotut crossed the finish line in 2:08:59, recording the second fastest time in the history of the Florence Marathon. The 29-year-old missed James Kutto’s course record by 17 seconds. Samuel Lomoi from Kenya finished second, improving his PB from 2:12:14 to 2:09:54. Olivier Irabaruta from Burundi completed the podium, taking third place in 2:10:13 ahead of former Eritrean record-holder Oqbe Kibrom Ruesom. 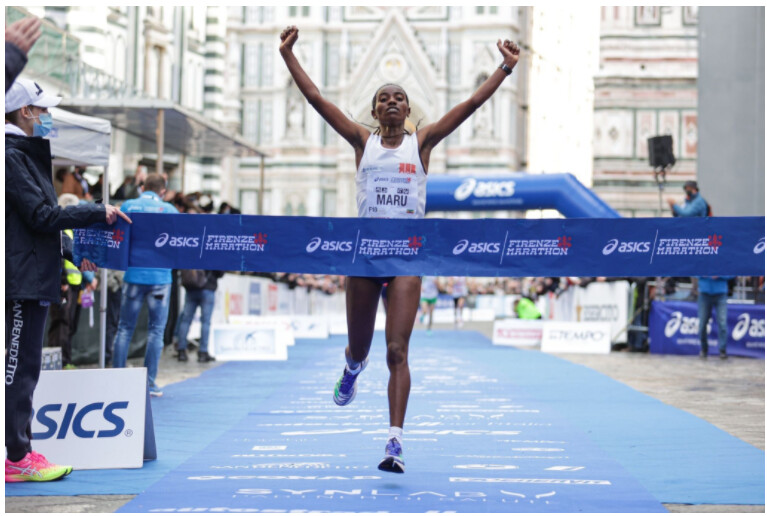 The race really started at 30km, when three runners – Lomoi, Kotut and Kibrom – remained in contention. The leading trio reached the 30km mark in 1:31:48.

Lomoi and Kotut made the decisive move at 35km and ran neck and neck until 40km. Kotut launched his final sprint with 2km to go to win by 55 seconds over Lomoi.

In the women’s race, Maru set the fourth fastest time in the history of the women's event in Florence with 2:27:17, beating her compatriot Megertu Ifa Geletu by four seconds. Kenya’s Mercy Kwambai finished third in 2:27:32 ahead of Morocco’s Souad Kabouchia (2:27:49).

Maru and Geletu ran together over the final 2km in a close race, while Deme and Tuei dropped back. Alemu unleashed her kick in the final kilometre to win in 2:27:17, as four women dipped under 2:28 for the first time at the Florence Marathon. Geletu with 2:27:21 and Kwamboi with 2:27:32 joined Maru in setting personal best times. 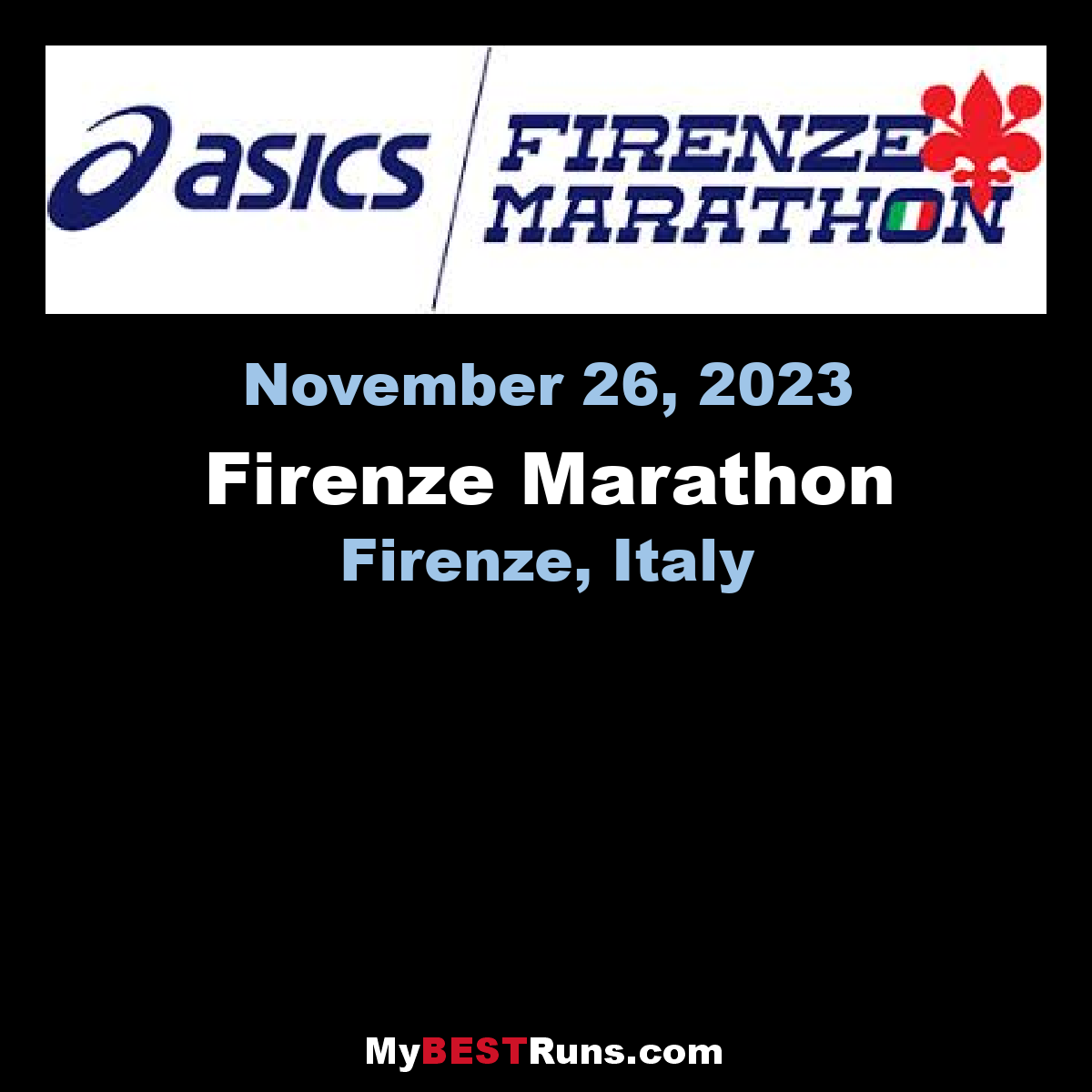 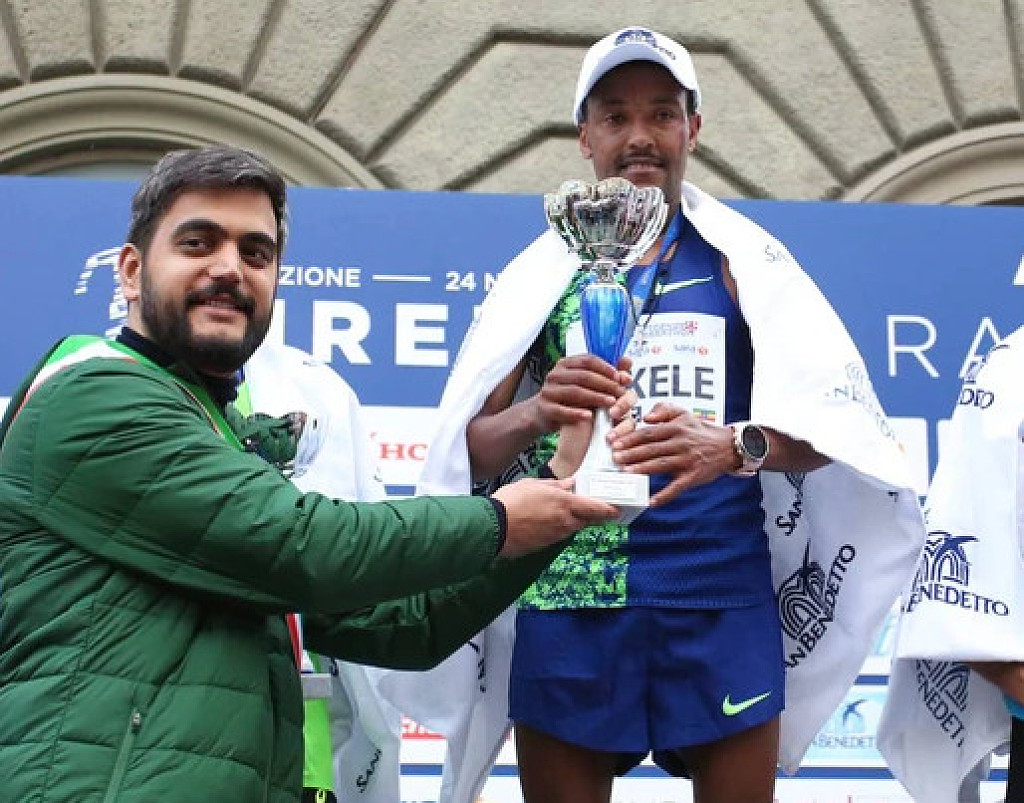 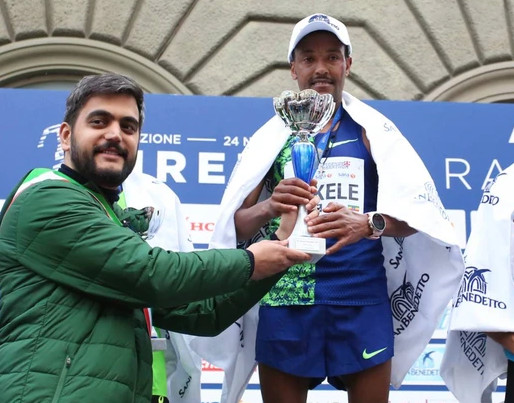 Britain’s Jessica Piasecki recorded the second-fastest time in the history of the Asics Firenze Marathon, winning the World Athletics Bronze Label road race in 2:25:29 on her debut at the distance on Sunday (24).

Ethiopia’s Nigussie Sahlesilassie Bekele took the honours in the men’s race with 2:10:14, just four seconds shy of the PB he set earlier this year. 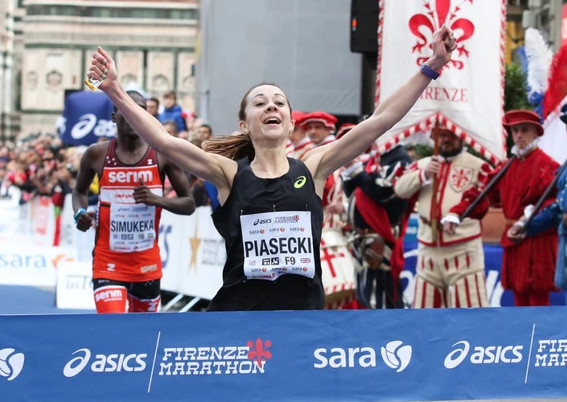 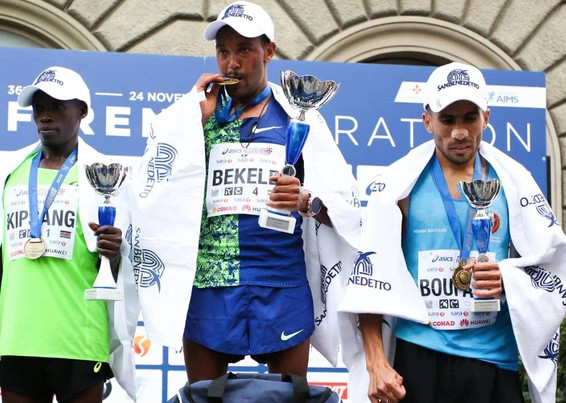 Tefera, the fastest runner in the field with a 2:23:12 PB from a few years ago, went to the front and reached the halfway mark in 1:14:31, closely followed by Piasecki, Yator and Jebet. Tefera and Piasecki then broke away, clocking 1:27:55 at 25km with a 14-second margin over Yator.

Piasecki launched her attack soon after, opening up an eight-second gap on Tefera by 35km, reached in 2:01:38.

“The course was quite twisty, but it was an amazing race,” said Piasecki, the 2012 European U23 cross-country champion. “It was the first marathon race of my career and I achieved my goal of getting the Olympic qualifying standard for Tokyo. I can’t believe it.”

Her next goal is the 2020 London Marathon in April, which will double as the British trials for the Olympic Games.

Bekele stepped up the pace and broke away from Mengistu, going through the 35km mark in 1:47:18 with a lead of 24 seconds. Kipsang was further back in third place.

Bekele crossed the finish line in 2:10:14, missing his career best by just four seconds. It was his third consecutive 2:10 clocking of the year, having set PBs of 2:10:46 in Wuxi in March and 2:10:10 when winning in Stockholm in June.

“After 30km I tried to step up the pace,” said the winner. “I saw that my rivals were not able to keep up with my pace. I held on until the end.” 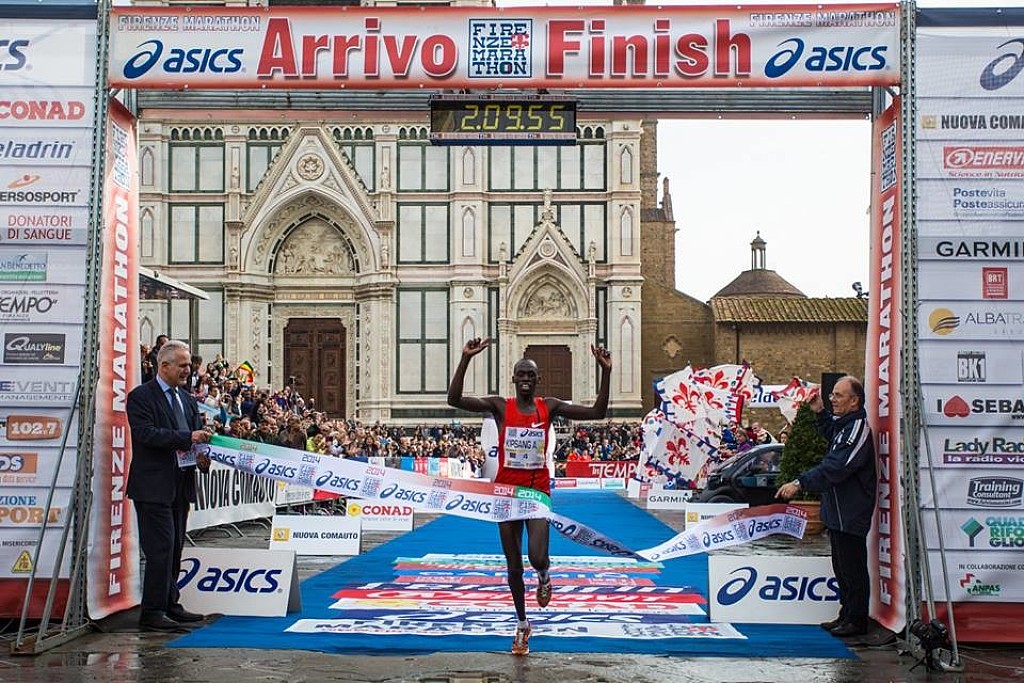 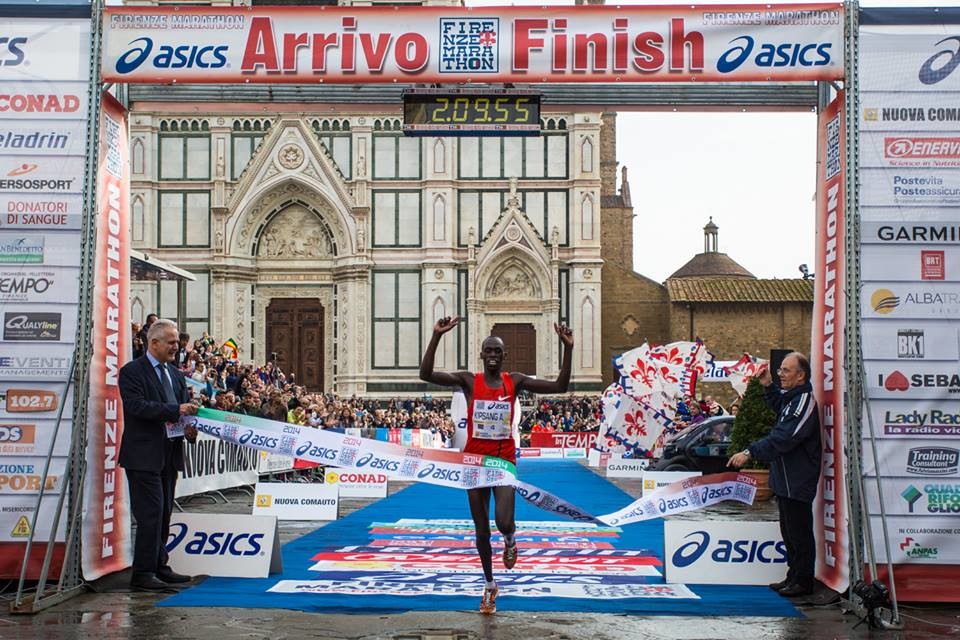 Kenyan Peter Kirui Cheruiyot boasts solid personal best times in the half marathon with 59:22 from Prague in 2014 and in the marathon with 2:06:31 from Frankfurt in 2011. 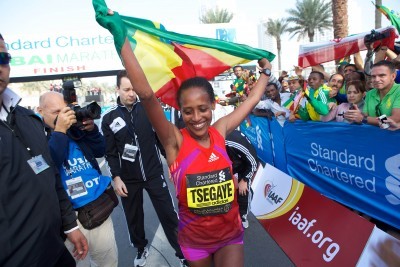 Gilbert Kipleting Chumba from Kenya has already run on Italian soil and won the past two editions of the Treviso Marathon - in 2018 he clocked his personal best of 2:12:19. 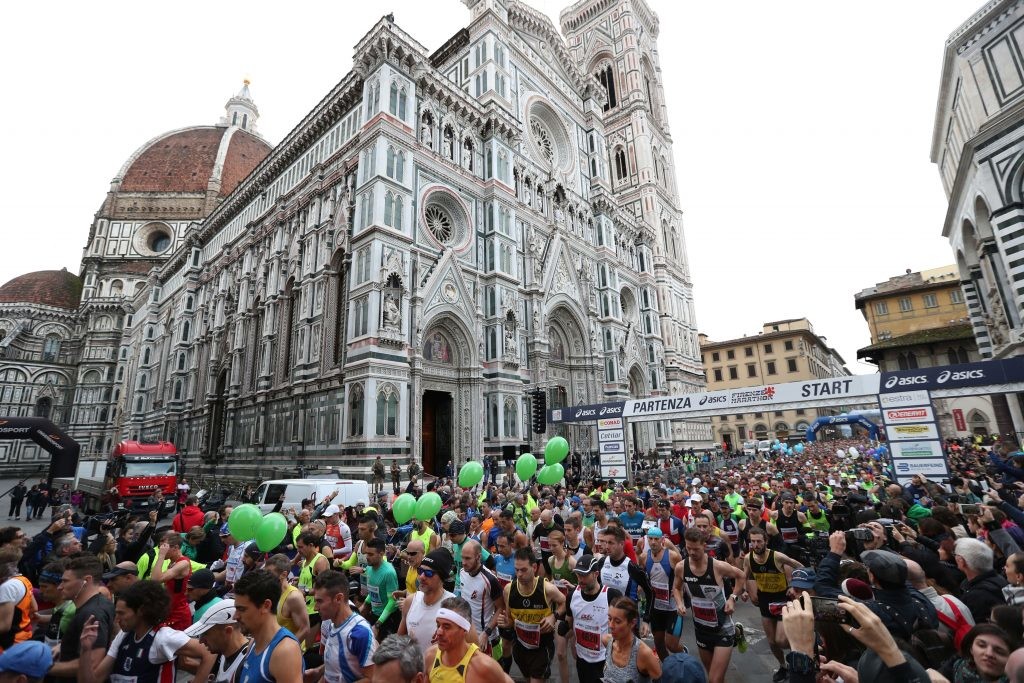 The Ethiopian contingent will be represented by Gereme Azmeraw Mengistu and Nigussie Sahlesilassie Bekele. Mengistu set his personal best of 2:12:27 in November 2016. Bekele won the Stockolm marathon last June in 2:10:10, also a personal best.

Morocco’s Hicham Amghar, who has a 1:00:23 half marathon PB, will make his marathon debut.

The best Italian runner in the field is Ahmed Nasef, who won two national marathon titles and set his marathon career best of 2:10:59 in 2012.

Croatian ultra-marathon specialist Nikolina Sustic set her previous marathon career best of 2:41:11 in Florence last year and improved this time to 2:37:55 in Padua in 2019. Former European U23 cross country champion Jess Piasecki will make her debut over the marathon distance after improving her personal best in the half marathon to 1:11:42 in Usti nad Labem in Czech Republic last September. 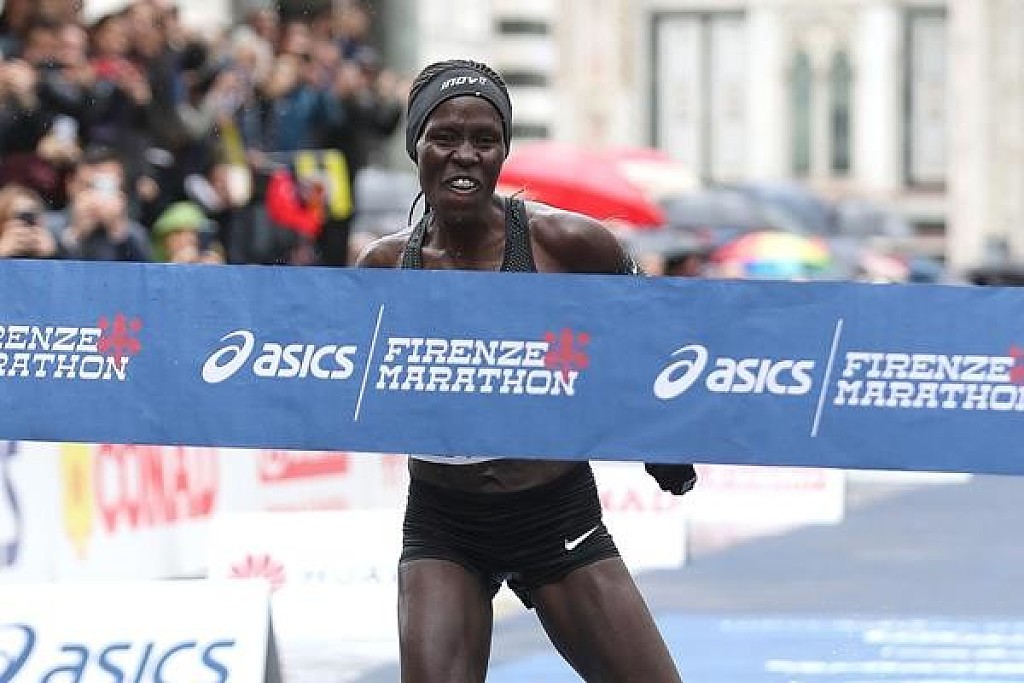 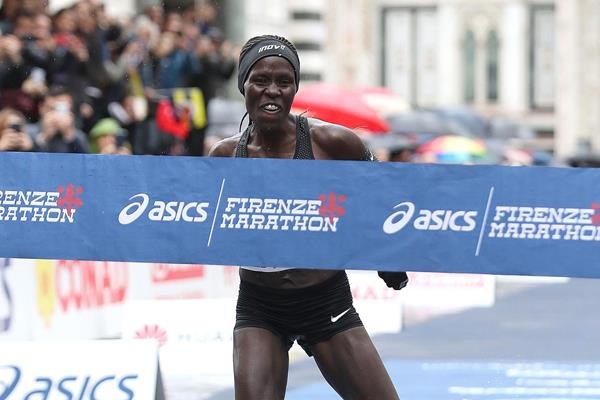 Lonah Chemtai Salpeter smashed the course record at the 35th ASICS Firenze Marathon, an IAAF Bronze Label road race, on Sunday (25). The reigning European 10,000m champion clocked 2:24:17 to clip nearly four minutes from the previous record of 2:28:15 set by Slovenia’s Helena Javornik in 2002. Her performance was also a national record for Israel, shattering the 2:35:59 standard set by Elena Dolinin in Berlin two years ago. Salpeter dominated the race, winning by more than six minutes over Kenyan Caroline Chepkwony.  Salpeter took the lead in the early stages, running with Gebiyanesh Gedamu from Ethiopia and Clementine Mukandanga from Rwanda, the trio passing 10 kilometres in 34:37 and 15 in 51:42. Salpeter and Gedamu reached the halfway mark in 1:12:38, but the Israeli started pushing the pace, building a gap of eight seconds over Gedamu (1:26:04 to 1:26:12) by 25 kilometres. Salpeter continued to pull away, extending her gap over Gedamu to one minute at 30 kilometres (1:43.16) and to more than four minutes five kilometres later, propelled by a 6:30 two-kilometre split between kilometres 33 and 35. She covered the challenging second half in 1:11:39 for a negative split to smash her previous personal best by 16 minutes. Her 2:24:17 performance was the sixth fastest time ever run on Italian soil and the fastest by a European this year. Salpeter set her previous best of 2:40:16 in Berlin in 2016, but recently showed good form with a half marathon PB of 1:07:55 in Lisbon in October. This year she made her breakthrough improving all her career best times on the track running the 3000m in 8:42.88, the 5000m in 15:17.81, the 10,000m in 31:33.03 at the European 10000m Cup in London last May. She won the 10000m European title in Berlin in 31:43.29. “The crowd gave me strong support along the course,” said Salpeter, who grew up in Eldoret, Kenya, and moved to Israel in 2008. “I did not fear the rain, because I was ready with any condition. Firenze is the springboard event of my marathon career.” Chepkwony clocked 2:30:46 for second ahead of Mukandanga who clocked 2:30:59 to knock nearly five minutes from her previous lifetime best. Croatia’s Nikolina Sustic improved her PB to 2:41:51, finishing fourth.  (11/25/2018) Views: 1,049 ⚡AMP 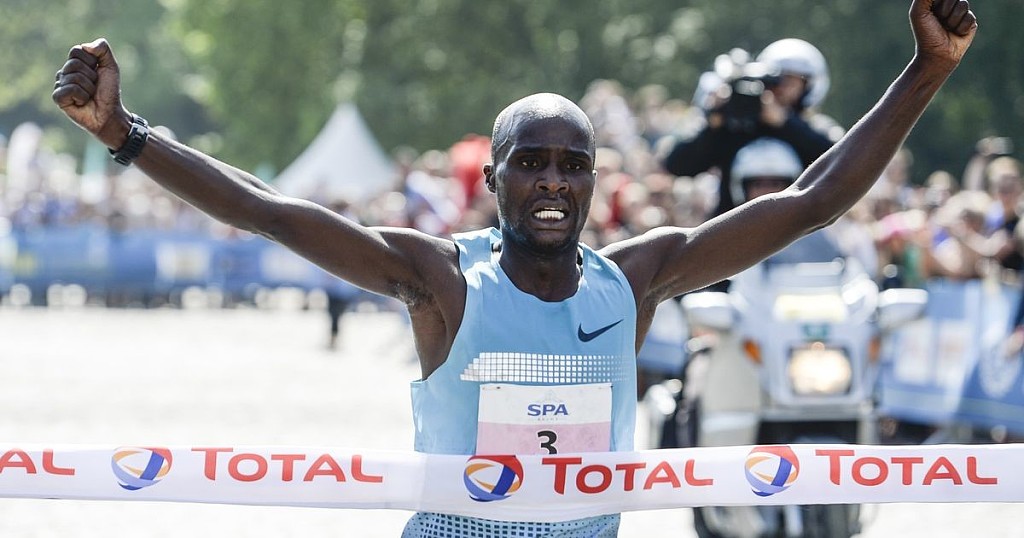 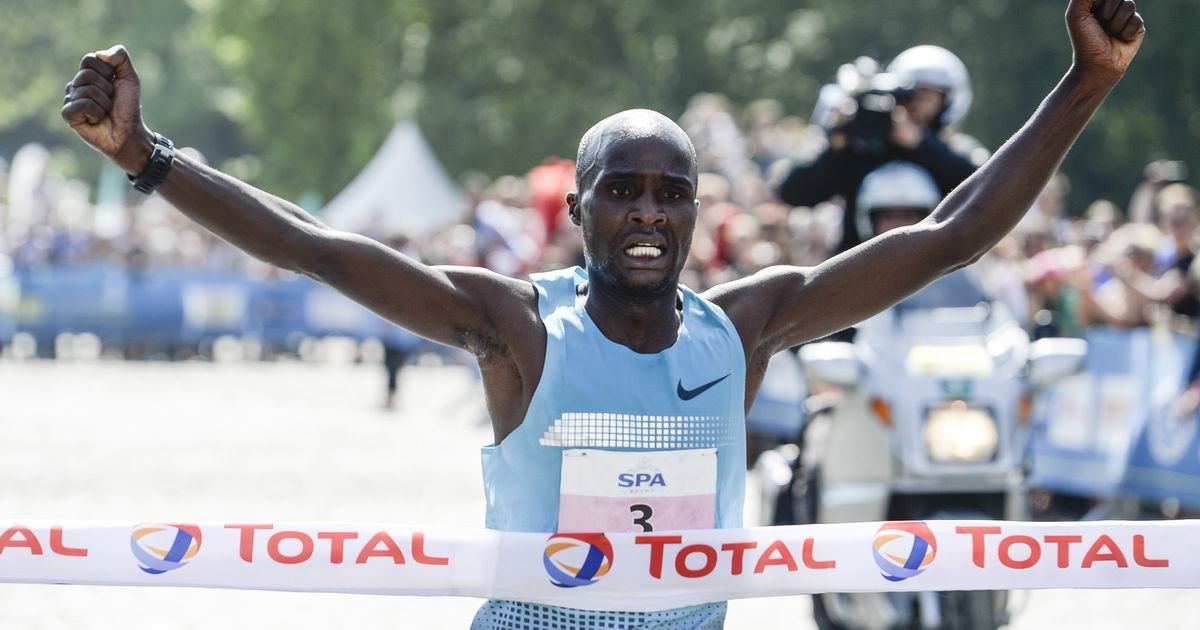 The 25-year-old has not raced since he clinched the bronze medal in Florence last year after he sustained an ankle injury. However, he returns feeling strong as he intends to recoup the missed opportunities hoping he will prove his mantle and secure a slot in the Kenya team to the World Championships next year in Qatar. "I have recovered and ready for the assault of the Florence course," Kirwa said on Thursday before departing to Italy. "It is about preparations and I have done my part and though there are some top names lined up, I believe the training has been good to withstand any challenge." Kirwa was the third-place finisher in the men's race last year. The Kenyan clocked his personal best of 2:06:14 in Frankfurt back in 2009 but ran 2:07:44 as recently as 2015 in finishing fifth at the Paris marathon. Later he was second at the Toronto Waterfall marathon in Canada clocking 2:09:01. But that will come under focus when he lines up at the Florence marathon course on Sunday. Kirwa will be up against China's Xiamen marathon champion Dejene Debela and Bonsa Dida from Ethiopia. After setting a personal best time of 2:07:10 in Eindhoven in 2017, Debela has won two marathons in China this year, clocking 2:11:22 in Xiamen and 2:12:08 in Beijing. "I hope to run well in Florence and see if I can defend my title in Xiamen next year. I believe I will have recovered, but it will be dependent on the performance in Italy," he said. (11/24/2018) Views: 1,032 ⚡AMP 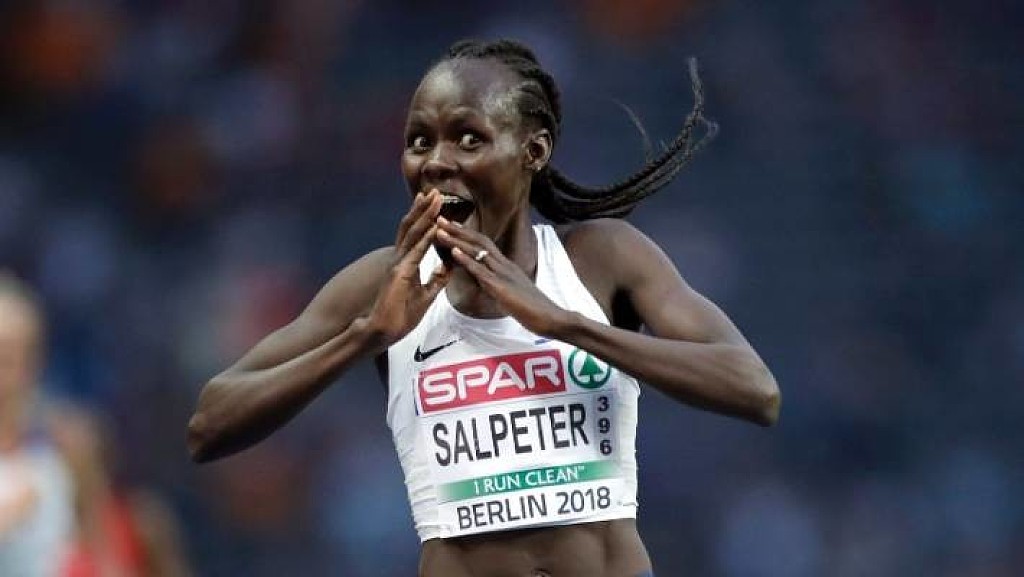 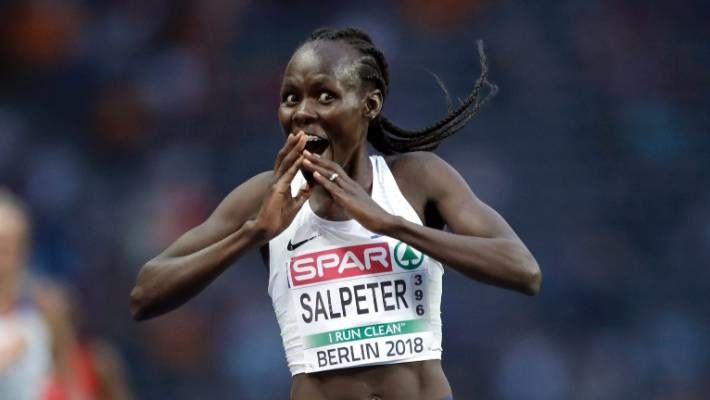 European 10,000m champion Lonah Chemtai Salpeter will be in the spotlight at the 35th edition of the Asics Firenze Marathon on Sunday

The 29-year-old has this year set Israeli records at various distances from the 1500m to the half marathon and she will be looking to add another to her collection this weekend. Before winning the continental 10,000m title in Berlin, she set a European-leading national record of 31:33.03 to win the European Cup in London in May. At the IAAF World Half Marathon Championships Valencia 2018 earlier in the year she set a national record of 1:08:58 and reduced that mark to 1:07:55 in Lisbon last month. Salpeter is yet to fully master the marathon, though. She has completed three marathons to date – her one failure to finish came at the 2016 Olympic Games – and her finishing times have all been between 2:40:16 and 2:40:22, a surprisingly consistent series of times for someone who appears capable of going much quicker for 26.2 miles. This weekend Salpeter is aiming at improving the course record of 2:28:15 set in 2002 by Helena Javornik. She could even challenge the European-leading time of 2:25:25 set by European champion Volha Mazuronak. Salpeter will take on Kenya’s Caroline Jepchirchir Chepkwony, who set her marathon PB of 2:27:37 in Lubljana in 2013, Ethiopia’s Ayele Gebaynesh, who has a career best of 2:26:54, and Kenya’s 2:27:07 performer Sarah Jebet. Croatia’s ultramarathon specialist Nikolina Sustic will run her fourth Italian race this autumn after Venice, Turin and Verona. The world 100km champion set a marathon PB of 2:42:44 at the European Championships in Berlin, improved to 2:42:10 in Turin at the start of November and last week clocked 2:42:26 in Verona. (11/23/2018) Views: 1,214 ⚡AMP