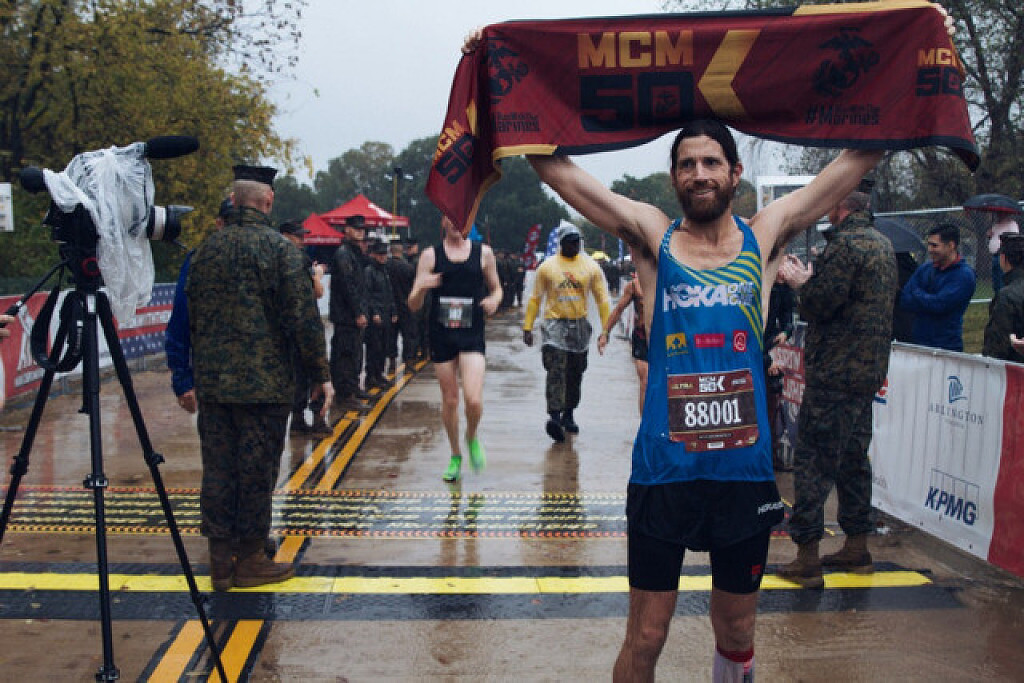 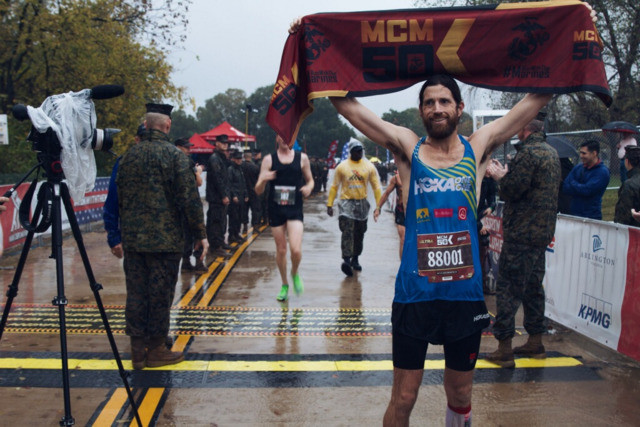 The 45-year-old Arlington resident added another title to his name, while women's champion Liz Kakouris Ozeki of Rockville won her first big race in the area.

Okay, tough guy. If running a marathon isn’t hard enough, try adding a steady downpour, stretches of shin-deep flooding, and unpredictable gusts of wind. And, how about adding another 4.87 miles, making it an even 50 kilometers (31.07 miles)? Just for fun. 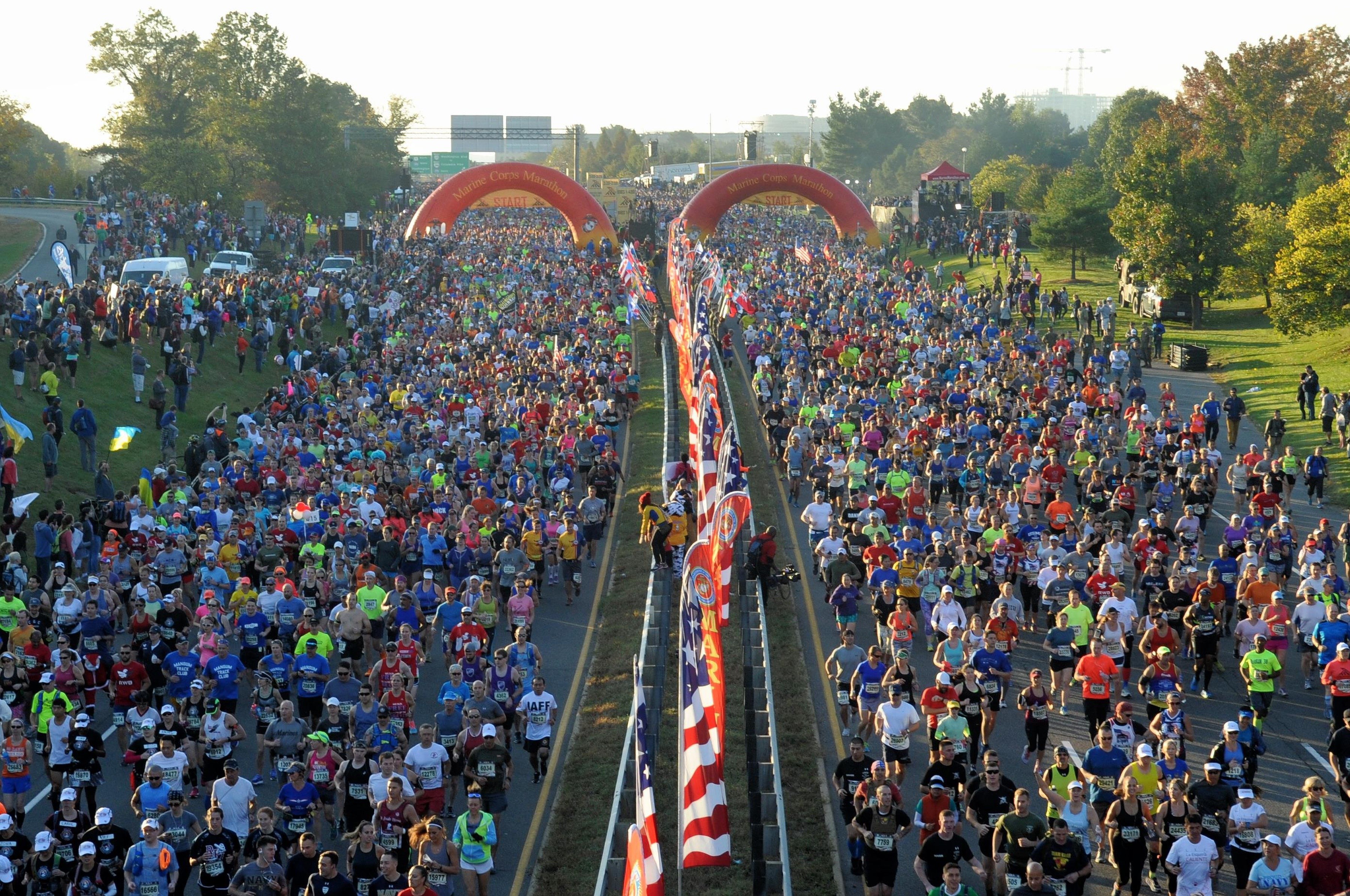 Almost 1,700 runners stepped up to the challenge and the start line on Sunday morning in the inaugural MCM50K, hosted by the event organizers for the Marine Corps Marathon. In its first year, the MCM50K sold out in less than an hour, and instantly became the largest ultramarathon in the United States. 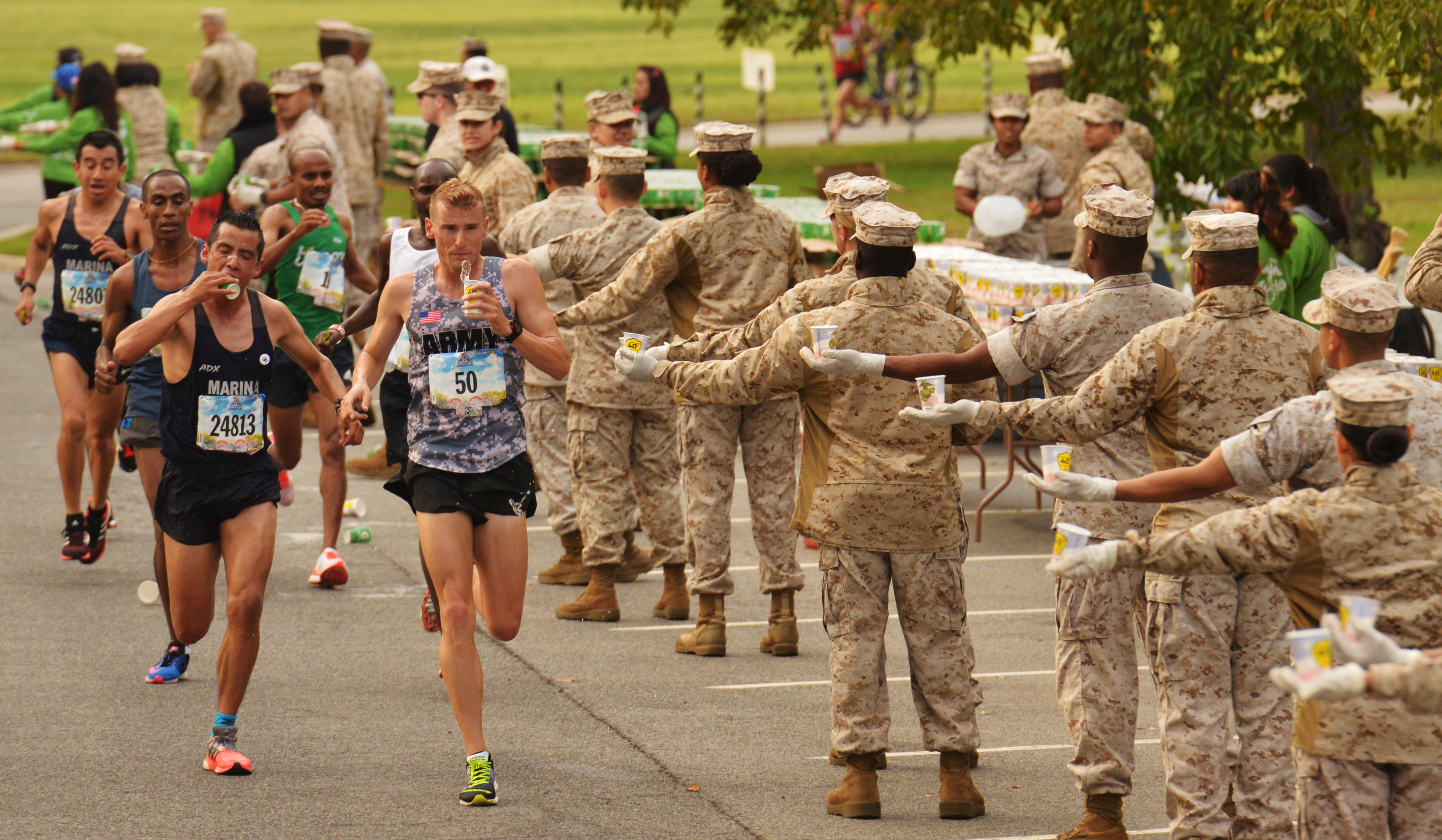 Two accomplished local runners who have made a name for themselves in the D.C. running community claimed the titles on Sunday. In the men’s race, 45-year-old Michael Wardian of Arlington finished with a time of 3 hours, 11 minutes, and 52 seconds (6:10 per mile pace). In the women’s race, 31 year-old up-and-comer Liz Kakouris Ozeki of Rockville won in a time of 3:42:04 (7:08 per mile pace).

Both Wardian and Ozeki seemed unfazed by the weather. They took the rain in stride—quite literally—and just executed their strategy, no excuses.

Wardian, a celebrity in the ultramarathoning world, was characteristically upbeat and positive about the race conditions and his preparation.

“I’m lucky because I’ve run in so many conditions, so I was prepared for the things you have to be worried about when you’re getting that kind of exposure," he said. "We’re lucky in that it was dumping [rain] but wasn’t really cold. So, I didn’t have a lot of issues.”

Ozeki also felt prepared for the weather, having been tested in prior races, including the 2018 Boston Marathon, which she likened to a monsoon.

“I ran my first two marathons in the pouring rain," she said. "I’ve done it before, so I was confident it wouldn’t affect me. I think it might actually have helped because the rain cooled me off.”

The MCM50K was Ozeki’s second race at the 50K distance, and also her second win (she set the women’s course record at the Algonquink 50K in the spring). “I knew 50K was a distance I could be competitive in,” she said. “Initially, I wanted to finish top 10. Then, I thought a podium finish would be nice. But then, a bunch of friends kept encouraging me, saying, ‘Liz! You could probably win it!’”

Ozeki tested a risky strategy, deliberately going out faster than her marathon pace, so that she wouldn’t get caught behind larger crowds when the 50K course linked back up with the Marine Corps Marathon course in Georgetown. “I kept looking at my watch and thinking, ‘I should probably should slow down,’ but I just kept hanging on,” she said.

The strategy pushed Ozeki to the brink. “I think I paid for it later in the race. My hamstrings and calves kept cramping and spasming," she recalled. "I was scared I was going to DNF. But I just kept telling myself to keep running while you can. Just get to the finish line, it doesn’t matter what place you’re in.”

With the win, it’s clear that Ozeki’s risk paid off. She had never won a big race in the D.C. area.

"So this was really incredible," she said. "And the trophy is really sweet. I’m going to cherish that for a while.” 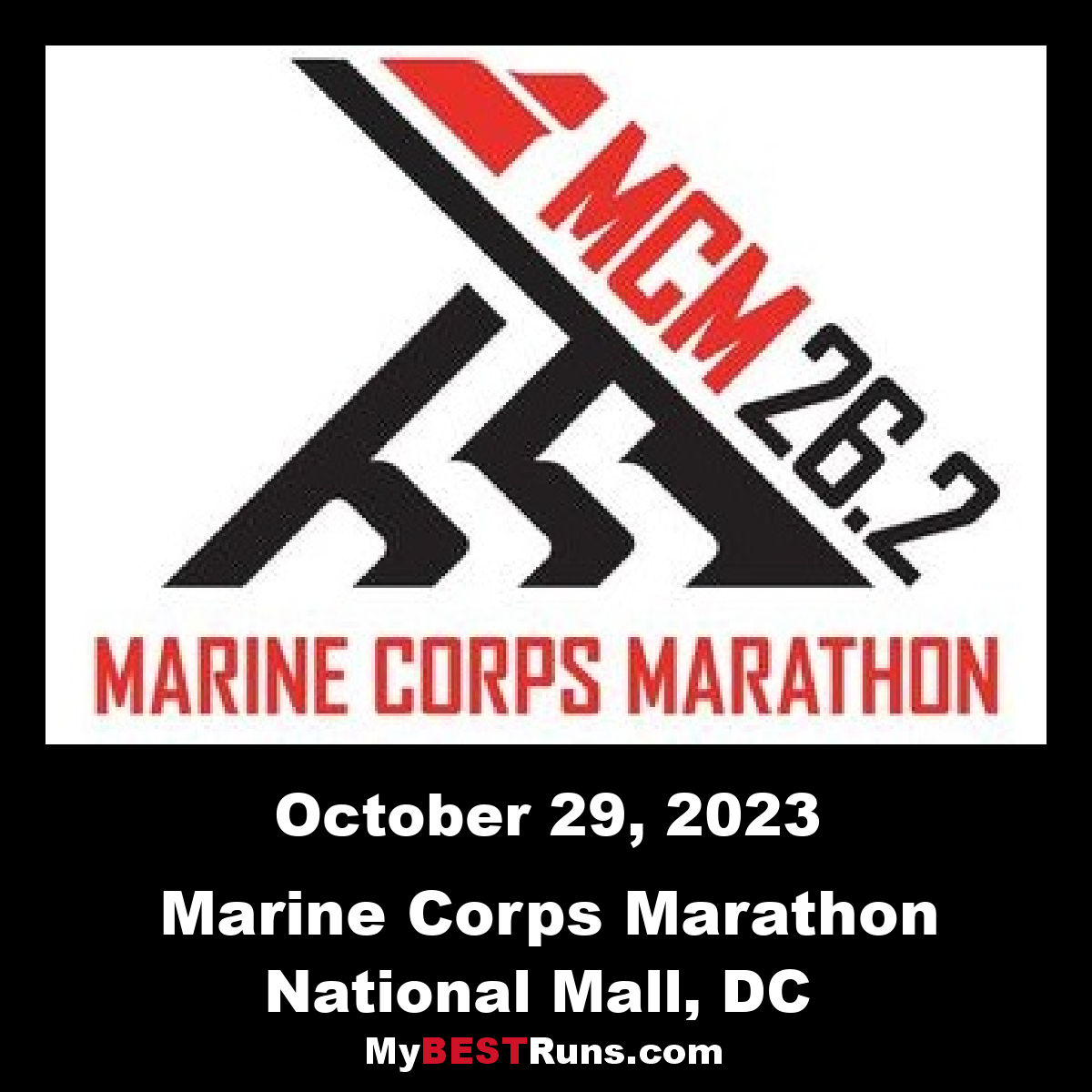