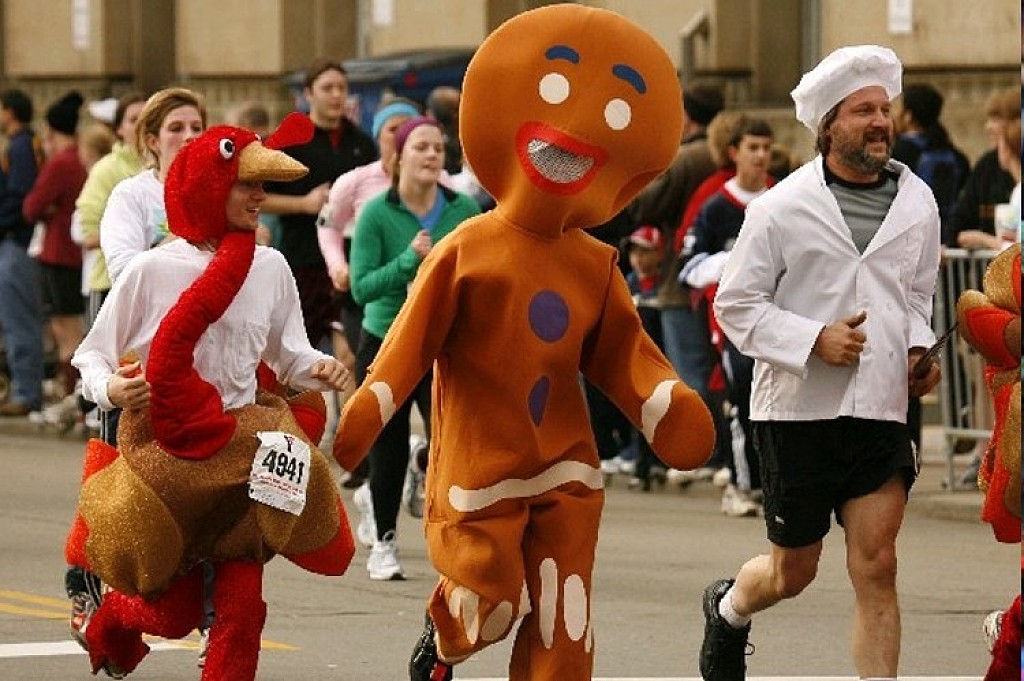 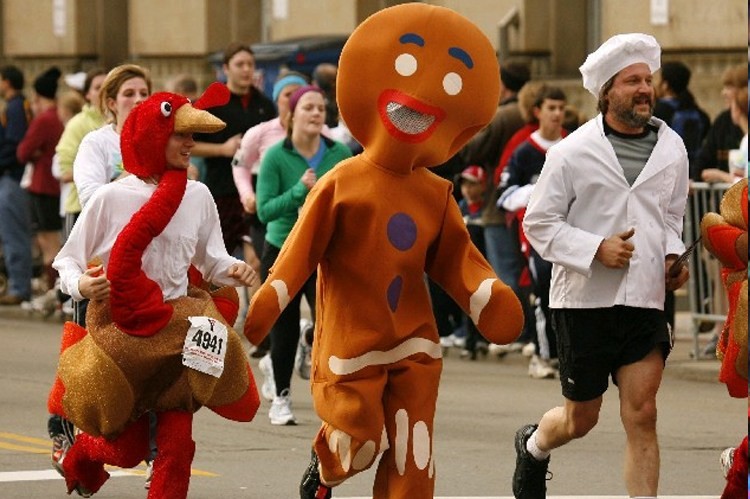 10 Reasons to Run a Turkey Trot

Thanksgiving is the most popular running day of the year, according to Running USA. Last year more than 1.17 million people registered for a Turkey Trot around the Thanksgiving holiday. The tradition is believed to have started in 1896 in Buffalo, New York, with Y.M.C.A. Buffalo Niagara’s Turkey Trot —  today the 8K attracts more than 14,000 runners and calls itself the “oldest consecutively run footrace in North America.”

While running a few miles won’t do much to offset the 2,000+ calories you’re likely to consume on Thanksgiving, there are plenty of other reasons to lace up your sneakers and get moving with family and friends.

1.- It’s one of those rare unicorn events that everyone can actually do together, whether you run, walk or trot. Win points with your Ironman father-in-law. Or just use it an excuse to be better at something (anything!) than your cousin. 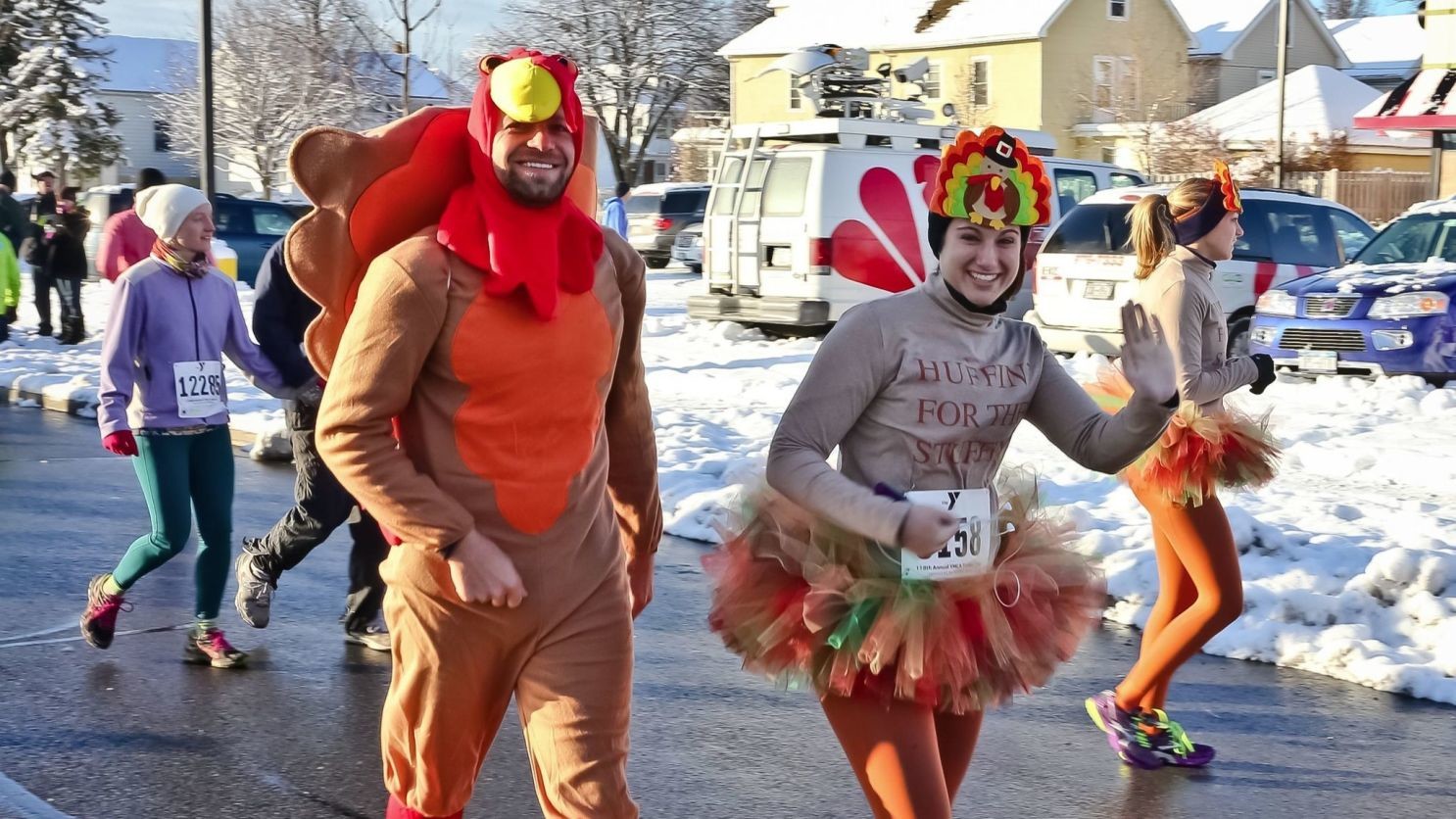 2.- On the other hand, if you get stressed by family dynamics, a Turkey Trot can also be a great excuse to escape. (Self-care, hello?!?!?) 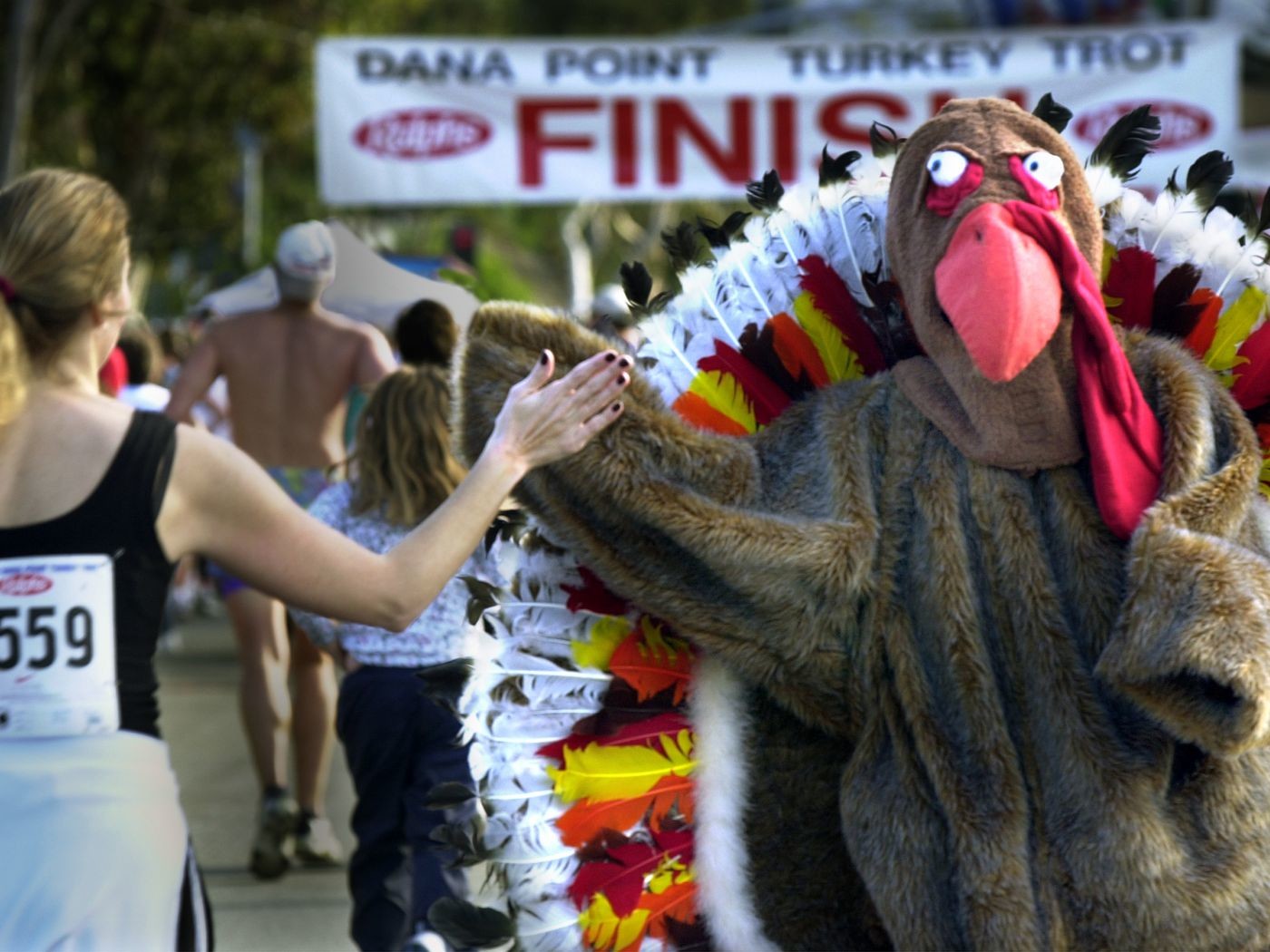 3.- Most races have shorter distances for kids, everything from a 1-miler to a 500-meter dash — often with mini-medals, chocolate lollipops or hot apple cider at the finish.

4.- You can probably get out of some holiday-related jobs/duties/tasks — peeling potatoes, putting the leaf in the dining room table, getting folding chairs from your uncle’s garage — because you will be at the race (and going to/coming from/showering after!).

5.- If you’re traveling to that same relative’s house for the fifth year in a row, consider finding a race in a nearby town (Active.com has a comprehensive list); a new environment can keep things interesting.

6.- Make fun of the (probably ugly) shirt that will go straight into your pajama drawer because it features the face of a massive cartoon turkey or the name of a local pub. (Why are Turkey Trot race shirts so universally bad?)

7.- Feel morally superior to everyone else when you post your Turkey Trot pic on social media or feel less lazy (and avoid FOMO) when everyone else posts theirs.

8.- Enjoy an extra helping of stuffing.

9.- If you do post a pic, use #WillTrotForBeer and tag @MichelobULTRA — until December 1 the brand will donate $1 per pic (up to $10,000) to AmpleHarvest.org, a non-profit aiming to end food waste and hunger.

10.- Appease guilt on Friday when you don’t work out because you’re still full/busy shopping/watching Christmas movies/eating another slice of pie. 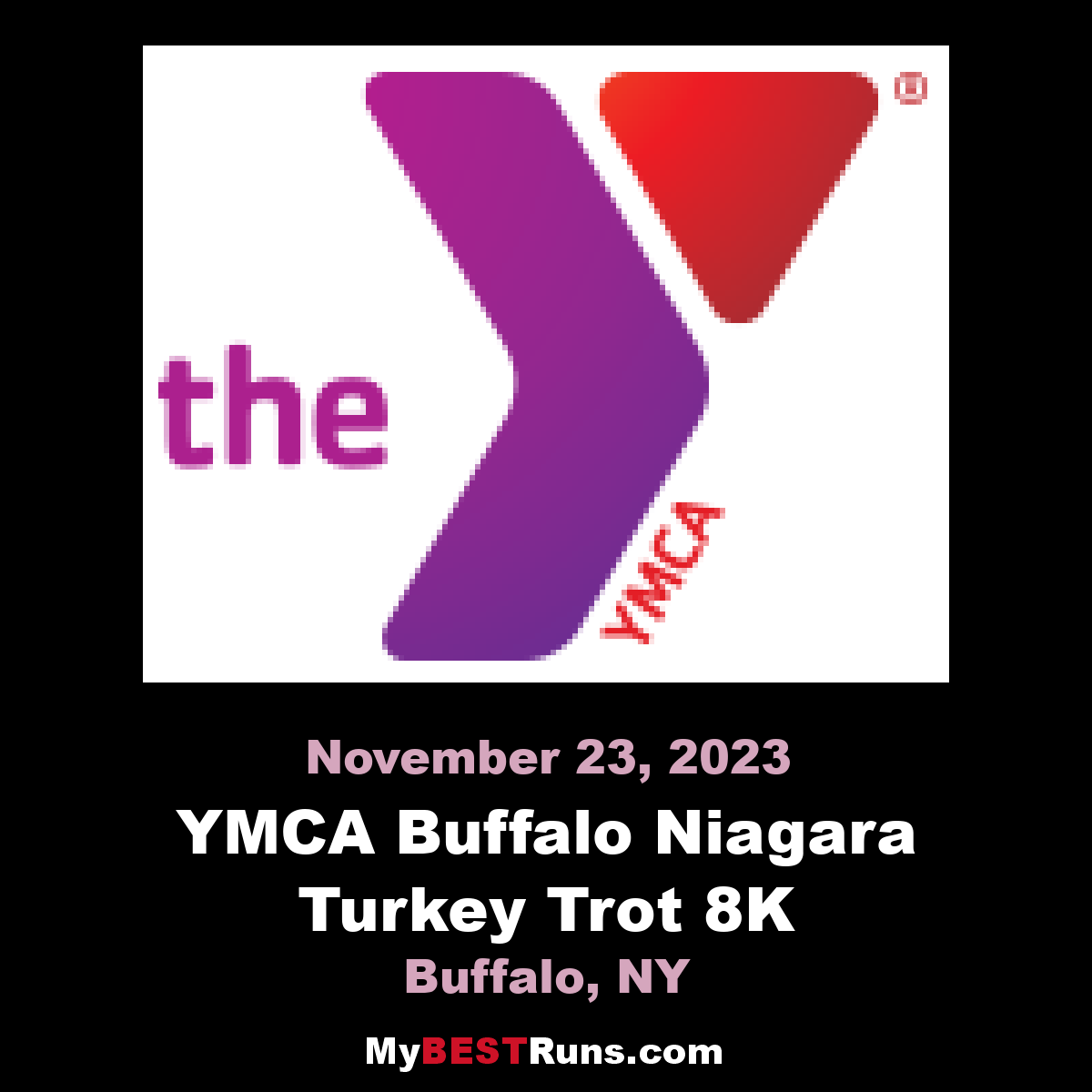 The enthusiasm, energy and incredible holiday spirit that radiated down Delaware Avenue tells us that our local Thanksgiving Day run is so much more than just an 8k road race. It is an incredible tribute to all that makes Western New York great – Family, Friendship, and Benevolence. Together with the Y, you are helping to connect those less fortunate... 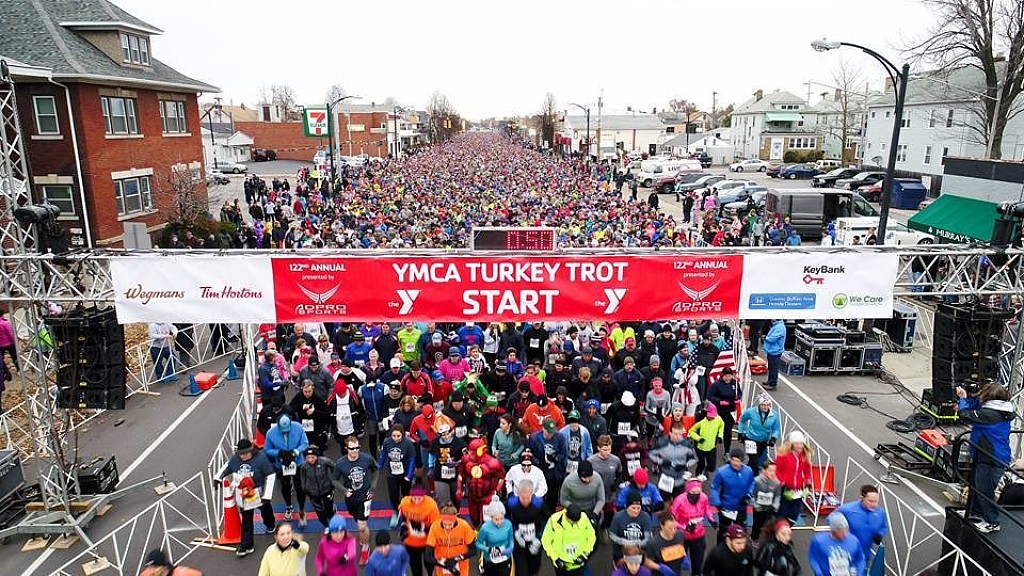 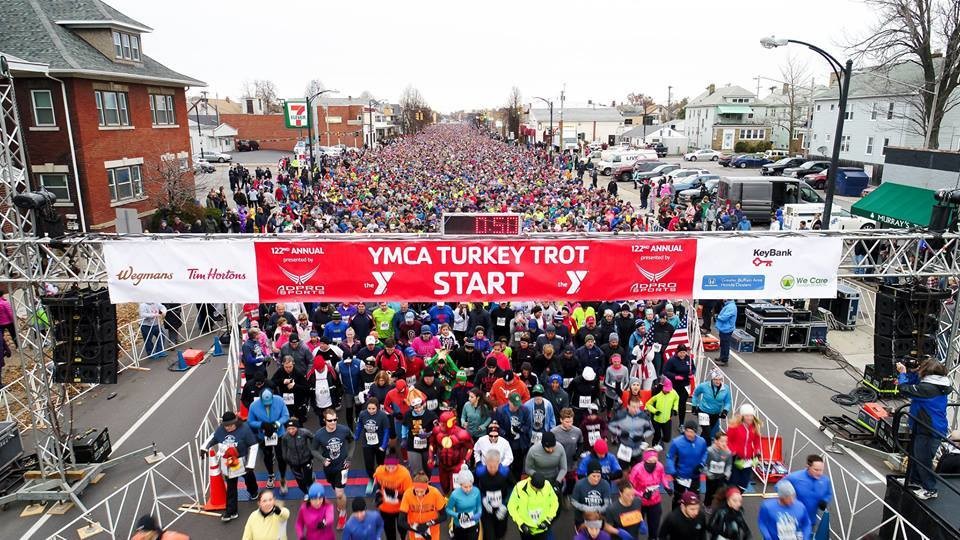 Turkey Trots On Thanksgiving, Is one of the most popular days of the year to race

If you think about it, the Turkey Trot makes perfect sense. It unites the caloric extravaganza that is Thanksgiving with the calorie-torching activity that is running. Perhaps that’s why in 2015, Thanksgiving eclipsed the Fourth of July as the most popular day to run a race, drawing nearly a million participants to more than 1,000 different events across the country. But while the Turkey Trot’s popularity is a modern phenomenon, its origins stretch all the way back to 1896. The inaugural trot took place 122 years ago in Buffalo, New York. The 8K cross-country race, hosted by the local YMCA that Thanksgiving Day, drew just six participants, and only four of them made it to the finish line. This year, more than a dozen turkey trots are taking place on Thanksgiving in Colorado. From Durango to Greeley to Colorado Springs, it’s a hugely popular day to run. The state’s biggest race, the Mile High United Way turkey trot, attracts more than 8,000 runners and walkers each year.  One of the largest is the Turkey Trot in San Jose California.   (11/21/2018) ⚡AMP