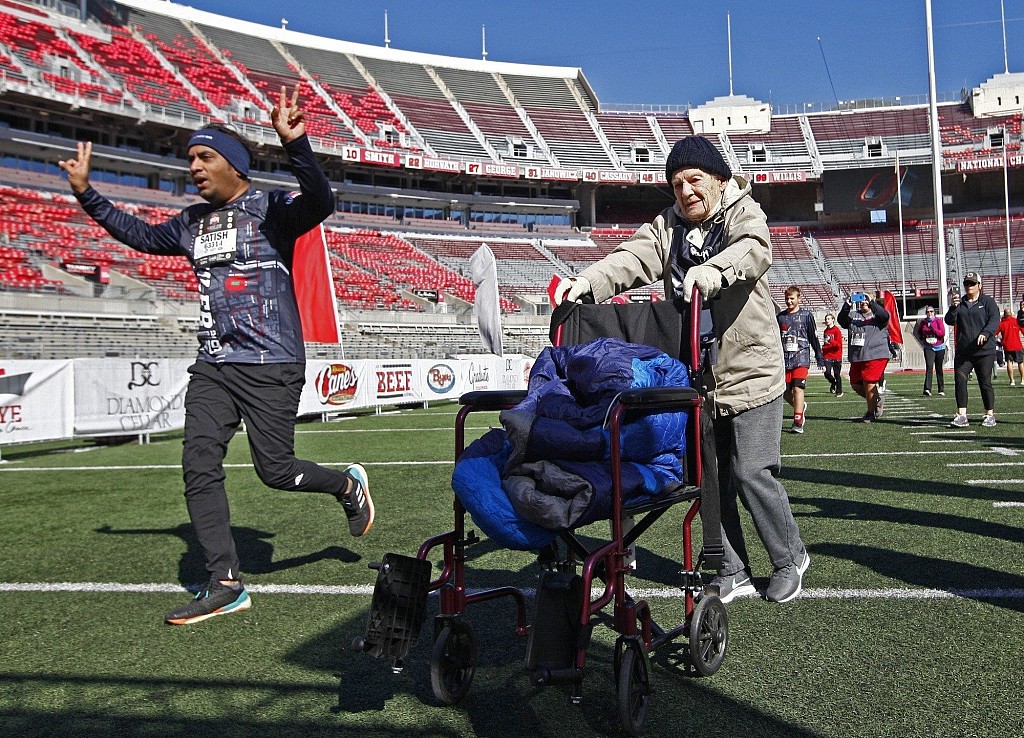 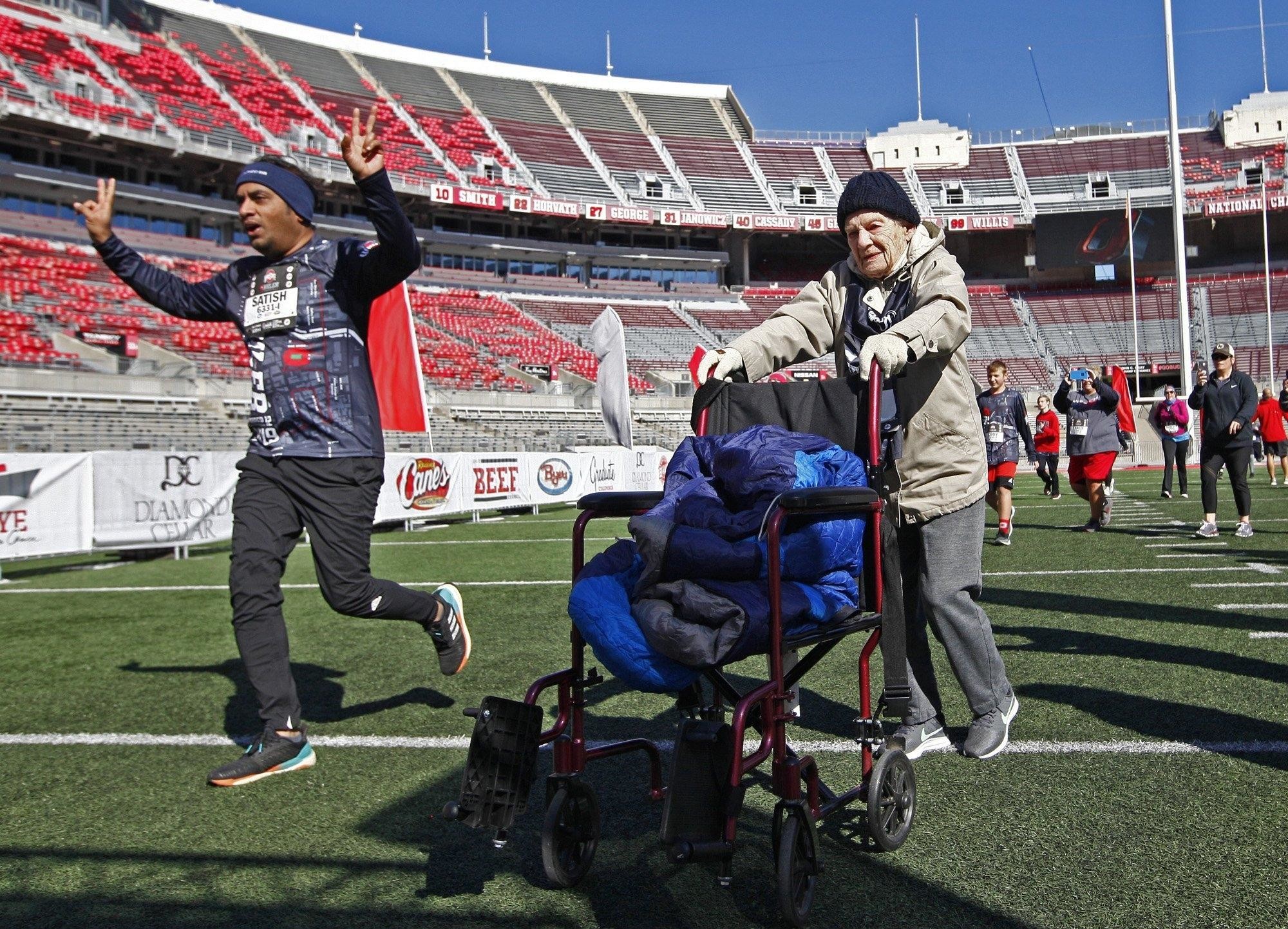 Amid the crowd of 15,000 walking and running across the campus Saturday, Lois “Marge” Stroebel, 101, of the Dayton area, completed the charity 4 Miler for the second year in a row, with help from her granddaughter and friends. She was the oldest participant in the race ending in Ohio Stadium, but nearly 200 of them were over 70.

When she reached the north end zone inside Ohio Stadium on Saturday, Lois “Marge” Stroebel rose from her wheelchair, shed the sleeping bag she’d been bundled into like the stuffings of a burrito, and, powered by her own determination, headed straight for the 50-yard line.

Now, she wasn’t exactly bee-lining toward the big “O” at the center of the field, and her gray Nike sneakers weren’t leaving any smoke trails, but give her a break. She is 101 years old, after all. 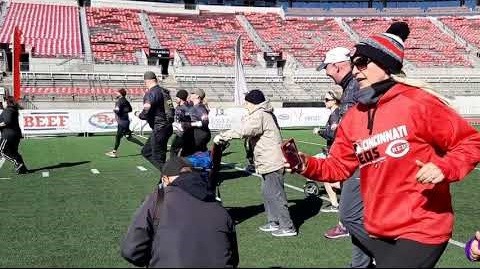 After walking those last 50 yards and crossing the finish line at the seventh annual Ohio State 4 Miler to cheers, high-fives and a special acknowledgement from M3S Sports Race Director David Babner (who mistakenly announced Saturday was her birthday, thought it was in September), Stroebel said she wasn’t even tired.

“I didn’t do anything but sit here,” she said with a laugh as she pointed to her posse. “They did all the work.”

This is the second year that Stroebel has completed the race, the largest of its kind in the country with 15,000 walkers and runners wending their way through the Ohio State University campus and ending up on the Buckeye football field. Stroebel and her granddaughter, Beth Kreger, travel from Vandalia, near Dayton, and Kreger’s friends and co-workers, Scott and Wendy Tharp, come from Lancaster to join in.

Scott Tharp ran the whole 4 miles pushing Stroebel in her transport wheelchair (that means it has small wheels) while his wife and Kreger ran interference.

“Look out! We’ve got Grandma!” they yelled as they zigged and zagged through the sea of people. “Beep beep. Grandma’s coming through!”

The small wheels on the transport chair meant it wasn’t the steadiest thing on the route. Scott Tharp said his hands were numb at the end of the race from gripping it so tightly to keep control.

“It was sure bouncy and bumpy,” agreed Stroebel, who seemed to not understand what all the fuss over her was about. She still lives alone, after all, and she cooks her own meals, dresses herself and never misses her regular bridge game. Until three years ago, she still golfed regularly.

She has been a rabid Ohio State football fan as long as she can remember. But last year when Kreger, a triathlete, suggested her Gram compete in her first-ever race at Ohio Stadium, it surprised her.

“Why, I thought she was crazy!,” Stroebel said of the idea. Now, she has two race medals in her collection. “We have a lot of fun.” 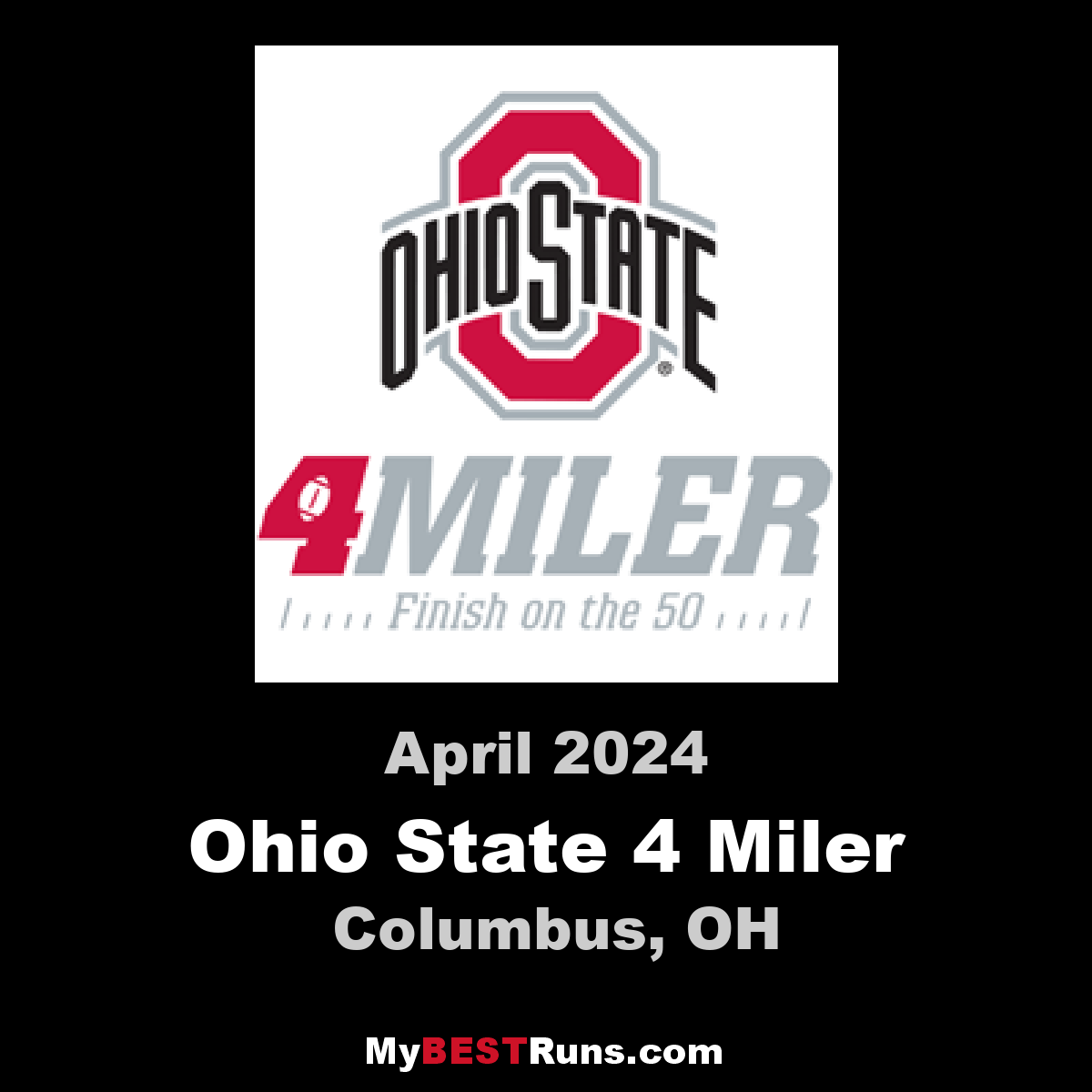