The solidarity race with the Saharawi refugees will be held in a virtual way during the last week of February. Participants will be able to run in their country while supporting the humanitarian project.in support of Western Sahara at this very delicate moment.

The Sahara needs us like never before. At a time when Covid19 has hit the whole world, the Saharawi refugee camps in Tindouf are experiencing an extremely complicated situation in which their precarious living conditions are compounded by the impact of the pandemic and the consequences of the war conflict that has resumed after 30 years of ceasefire.

In these circumstances and given the impossibility of performing the Sahara Marathon in person and with the assistance of runners from all over the world, the organisation of the solidarity race has launched a very special edition with a virtual event. Runners and supporters of the Saharawi cause will be able to participate in the prestigious race through a digital application that will be available once the registration is made (EUR 15 [USD 18]) and that will allow the athletes to run from anywhere in the world. 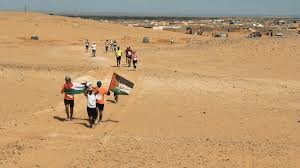 The Sahara Marathon is a solidarity race organised by the Saharawi Ministry of Youth and Sports and a group of volunteers from different countries. During the last twenty years, the race in the desert has served as a platform to denounce the unjust situation that exists in Western Sahara and to tackle countless solidarity projects in the refugee camps. Thousands of runners from all continents have travelled during this time to the Algerian desert to live the experience provided by this race and to bond with refugee families. In this unique edition of 2021, the objectives of the event remain, although the experience will be different. 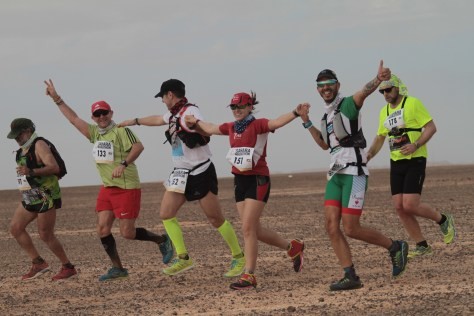 Participants will be able to carry out their race during the last week of February. They will be able to choose the most appropriate distance (5, 10, 21 or 42 km) and even run in different distances or repeat the race throughout the week (the best time will be validated). The application also invites runners to upload their videos and messages of solidarity with the Sahara to their social networks. All the money contributed for this solidarity project, as well as the donations or acquisitions of the inscription pack (T-shirt, tubular scarf and bib number), will be used in the Sahara Marathon solidarity project, which on this occasion is about Saharawi families in need of direct help, through the purchase and distribution of a basic food basket bought on site to favour the local economy.

On 26 February, the usual date for holding the marathon in other editions, a race (5, 10 km and children race) will be organised in the Saharawi refugee camps, where Saharawi athletes will participate, with the aim of keeping the spirit of the Sahara Marathon alive . The pandemic has caused significant restrictions to humanitarian aid for the Saharawi refugee camps during the last year, as well as to all the visits of aid workers and people in solidarity with the Saharawi, leading the refugee camps to a humanitarian crisis that is added to the global health crisis,. We therefore invite all regular participants in the Sahara Marathon, as well as all those committed to this cause, to support this alternative project by participating in the virtual race or contributing a small donation via www.saharamarathon.org. As it says on the official race jersey: “The desert wind will spread the Saharawi voice around the world.” 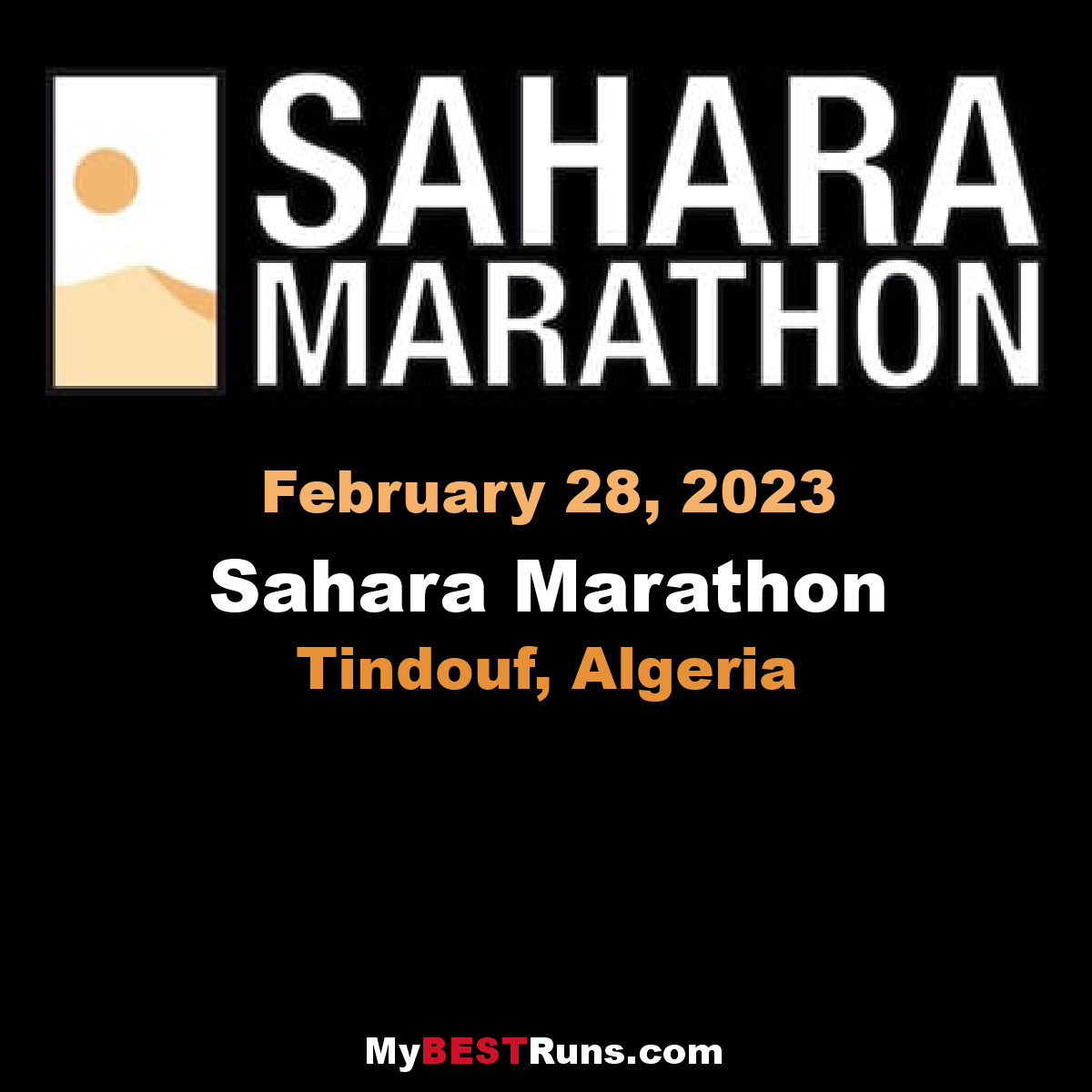 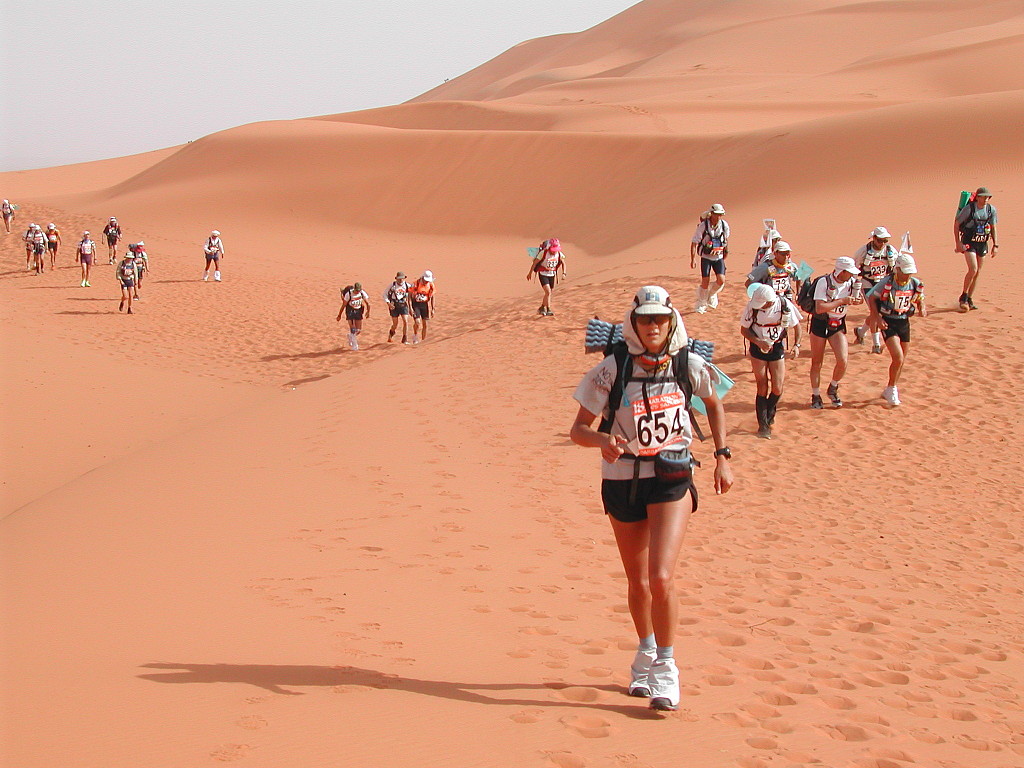 The young Saharawi Lehsen Sidahmed won first place in the 20th edition of the Sahara Marathon that began Tuesday in the wilaya of El Aaiún and ended his 42 km tour in the wilaya of Smara, according to Rasdsport. 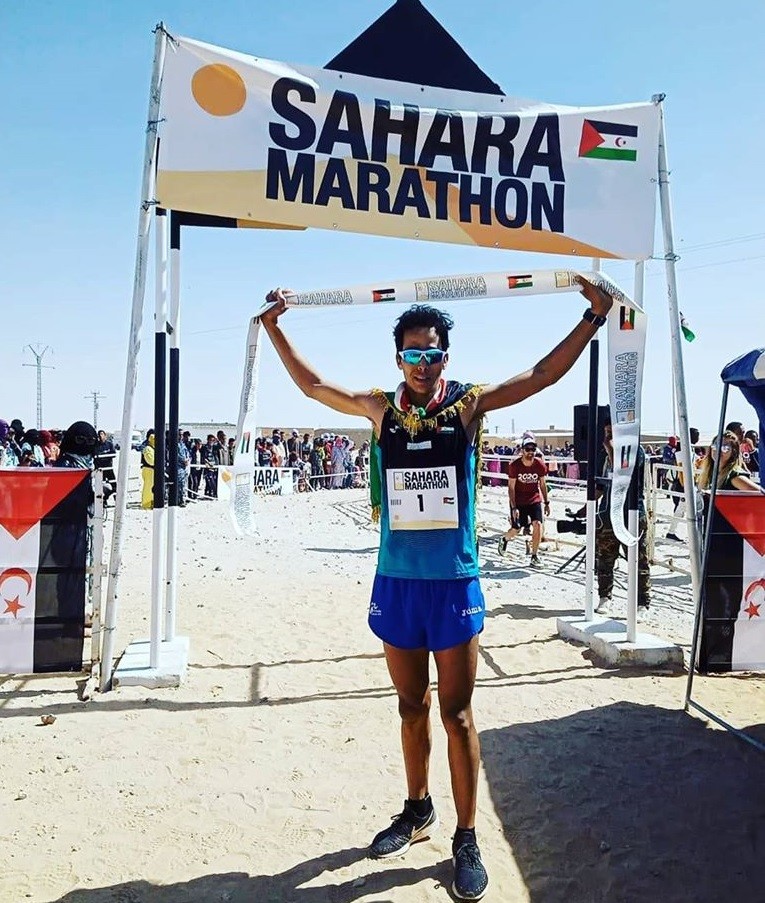 The winner of this 2020 edition, said he was very happy with this result, after expressing his solidarity and support for his people until he achieved independence. 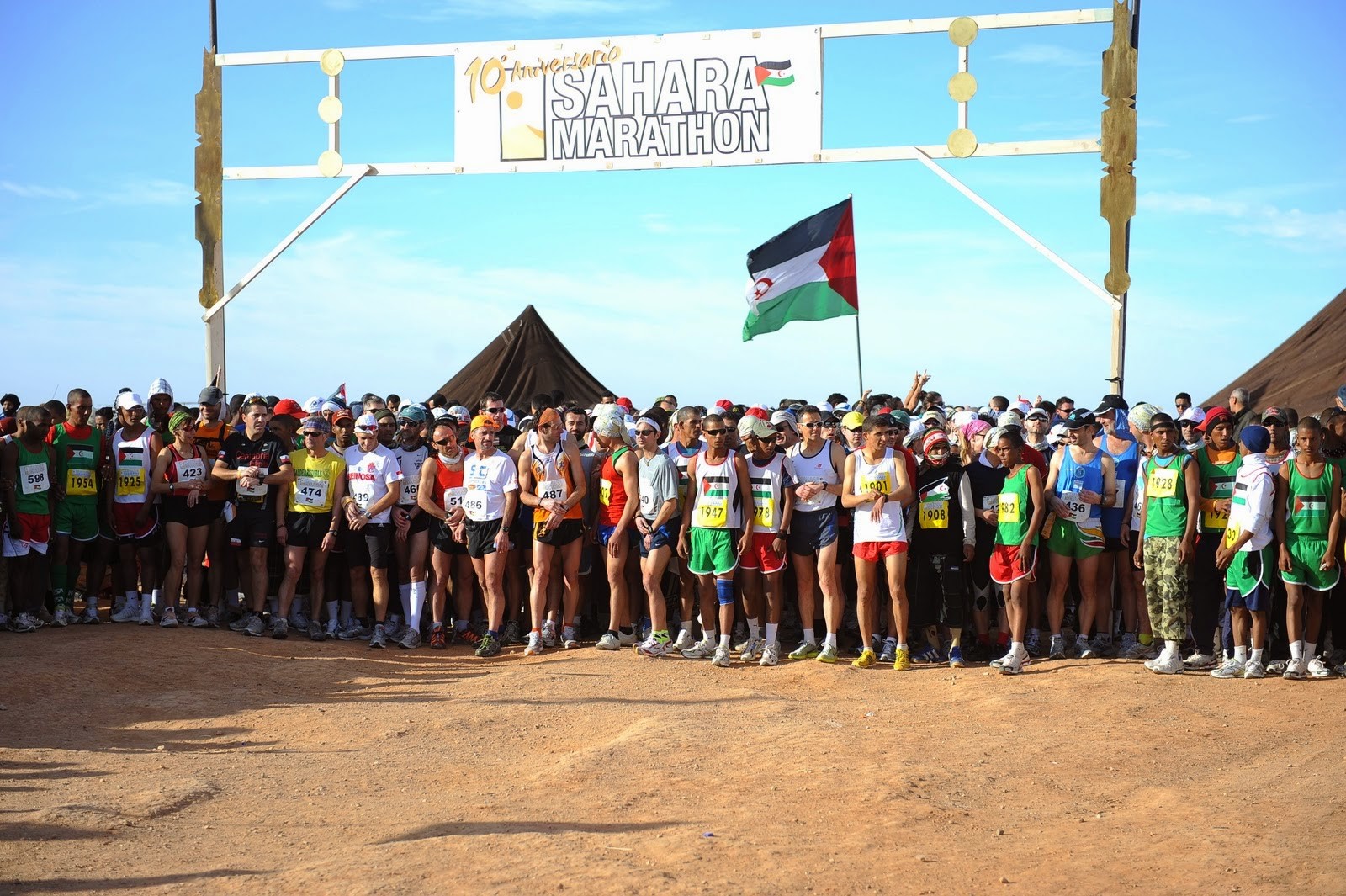 With the participation of more than 500 athletes from five continents, the Sahara Marathon Edition started on Tuesday in El Aaiún (Saharan refugee camps) with the presence of Sports Minister Musa Salma; the governor of the Willaya of El Aaiún and the director of the Sahara Marathon.Shortly after 10:00, the Sahara Marathon started, a test that reaches its 20th edition with the objective of making known the situation of the exiles of Western Sahara and obtaining resources to finance humanitarian aid projects for these refugees settled in the southwest of Algeria after the Moroccan military invasion of its territory.

In its 20th edition, hundreds of runners from all parts of the world participate in the race to improve the lives of Sahrawi refugees.

The benefits of the Sahara Marathon, become medicines, school supplies, tons of solidarity.This 42-kilometer race (from El Aaiún to Smara) is also the voice of a town that has been living in exile for 44 years. And it is that the real bottom race is the one that supports the around 170,000 Saharawis who resist day by day in one of the most inhospitable places on the planet.The Marathon of the Sahara is much more than a sporting event (21, 10 and 5 kilometer races are also deputy). 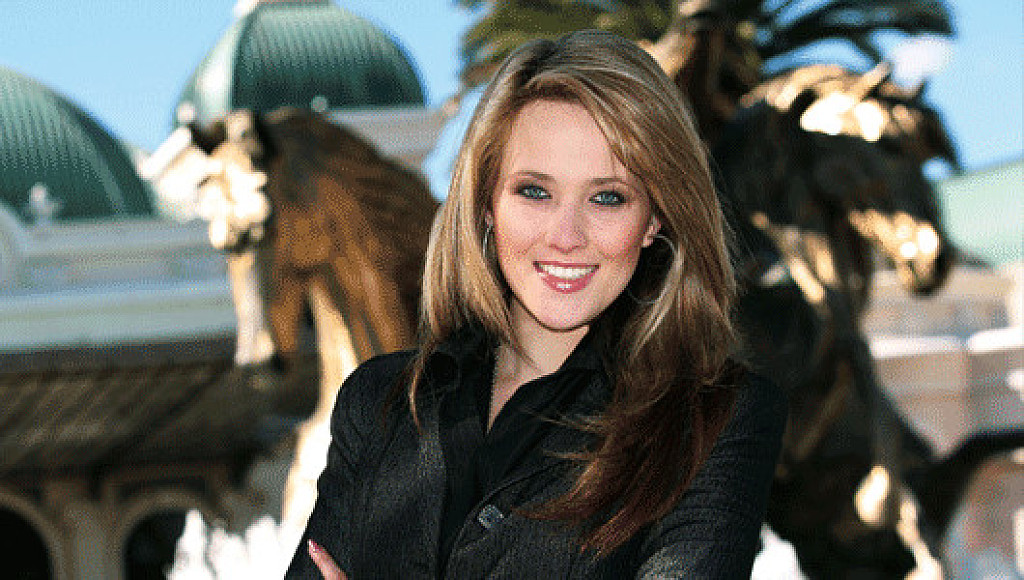 She is no stranger to challenge and adventure and she has set her mind firmly on participating in this year’s desert run. She serves on the Saharawi Human Rights Council and has been travelling back and forth to the refugee camps over the past five years. She is participating in the Sahara Marathon to raise awareness and honor the Saharawi freedom fighters and victims of landmines in the region.

According to various estimates there are still between 5-10 Million landmines still in the Sahara. “Western Sahara is one of the most contaminated territories in the world,” the UN Mine Action Service says on its website. Landmines and explosive remnants of war “remain widespread” and “there is very limited information available regarding the location of hazardous areas”, it warns.

The aim of the Sahara Marathon held in the Sahara Desert every year since 2001 was designed to demonstrate solidarity with the Saharawi people. 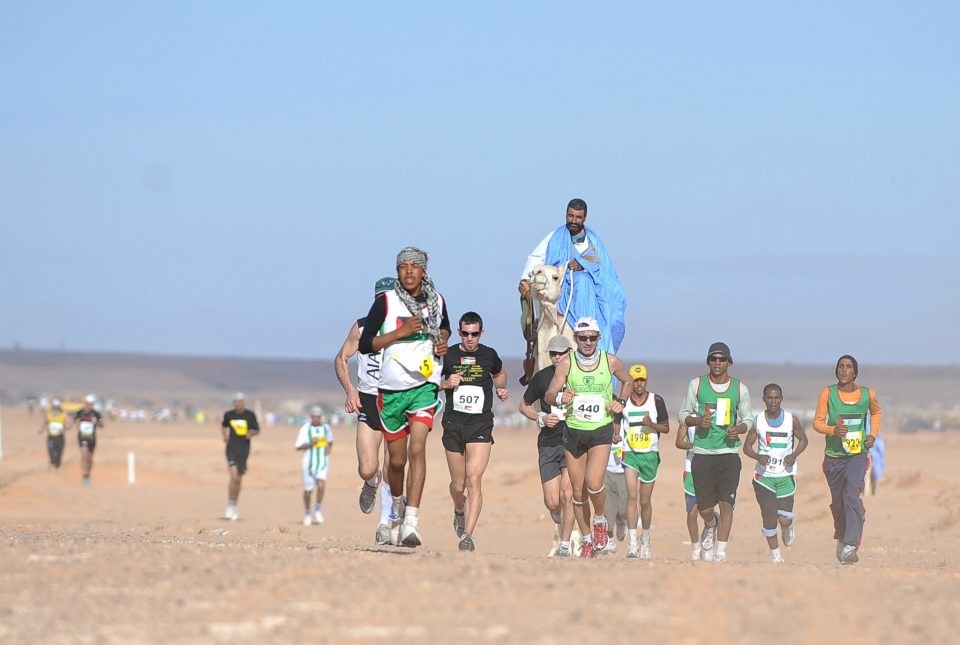 Constantinides has been actively engaged in highlighting causes across the continent linked to climate change and human rights for more than a decade.

Her active humanitarian work in the Saharawi Refugee Camps over the past five years has brought international awareness to this more than 43-year-old conflict. Now she runs in the sand for a people who continue to fight for self-determination and justice.

She says this marathon is certainly the biggest physical challenge she has ever committed to and has already begun preparing for it. 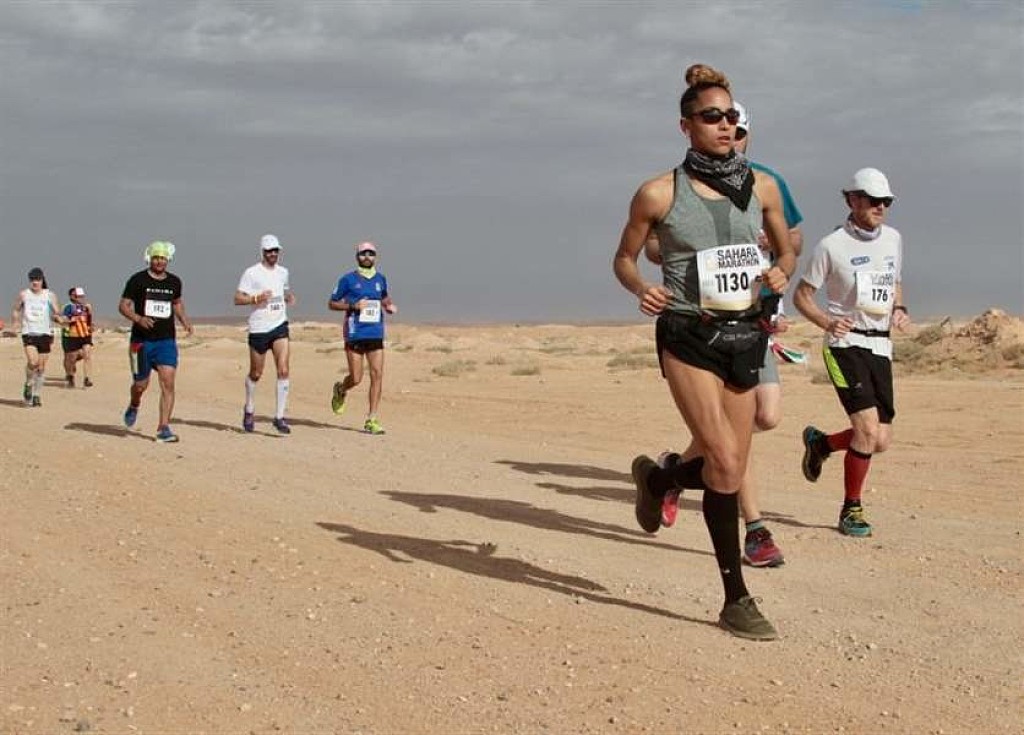 Winning her first marathon might be an accomplishment on its own, but former UT basketball player Inma Zanoguera also did it in the Sahara Desert. Zanoguera completed the Sahara Marathon in 3:48:11, six seconds ahead of Sonia Bernal from Spain. Zanoguera and documentarian Michelle-Andrea Girouard are still in Tindouf, Algeria, staying with Sahrawi refugee families. Zanoguera participated in the marathon because she recently discovered her biological mother was one of these refugees. As part of an emotional journey across the world to her roots, Zanoguera wanted to experience firsthand what kind of life her mother led before her untimely death when Zanoguera was three years old (03/01/2018) Views: 1,372 ⚡AMP 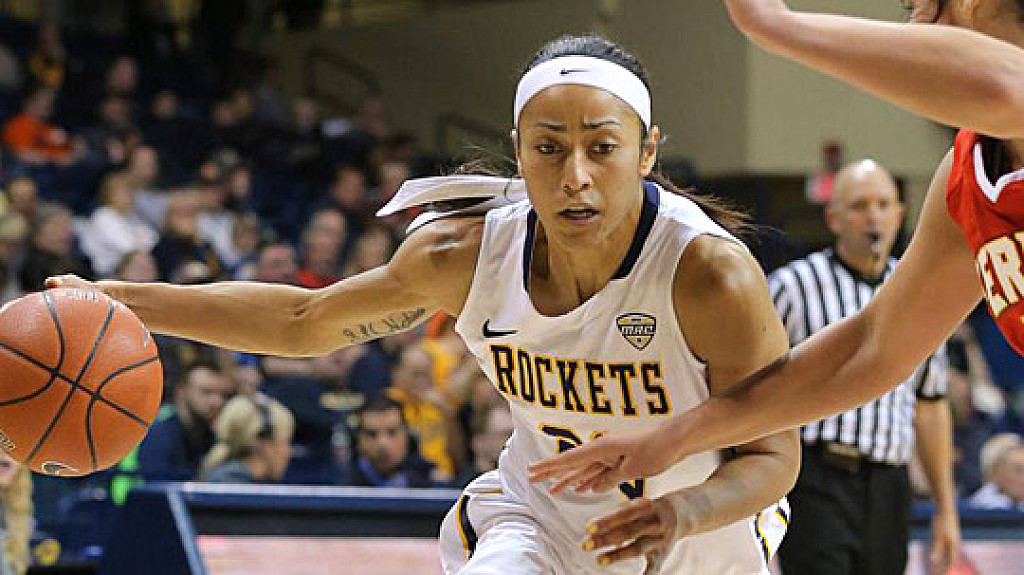 Zanoguera isnâ€™t sure what sheâ€™ll get out her first marathon. The basketball player has eagerly awaited this moment, and now itâ€™s just days away. Though sheâ€™s returned to UT for graduate school, she has tirelessly trained since the summer. But sheâ€™s not just passionate because itâ€™s a challenge â€” it will be unmistakably challenging, especially given that the race is in the Sahara Desert. Zanoguera is bringing awareness to a refugee issue in Tindouf, Algeria, that turns out to affect her far more personally than she ever grew up wanting to know. â€œThe thing about the truth is that it always comes out,â€ Zanoguera said. â€œIf you donâ€™t find it, itâ€™ll find you and itâ€™ll eat you alive.â€ (02/22/2018) Views: 1,265 ⚡AMP