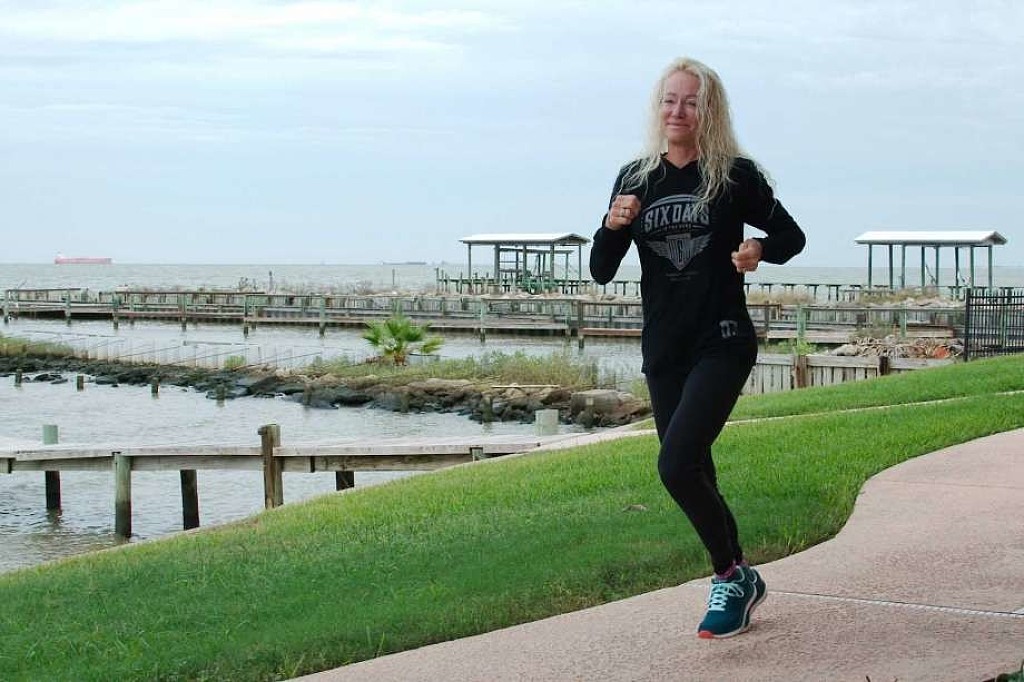 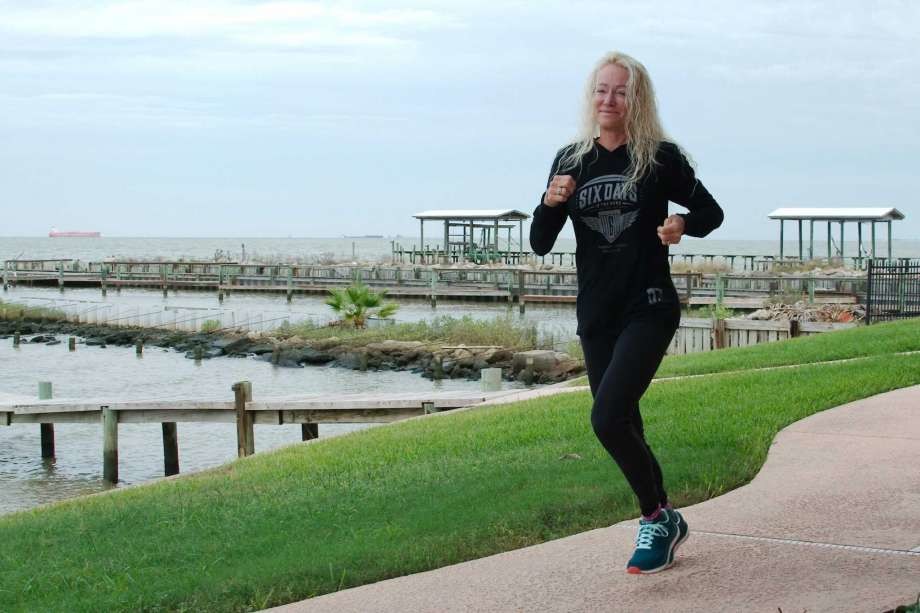 It’s not unusual to find Pamela Chapman Markle running anywhere from 80 to 100 miles each week. It’s just part of her long-distance race training as an ultramarathon runner, and the San Leon resident says she loves it.

“I enjoy the challenge physically and mentally,” said Markle. “It’s always a surprise to me to see how the body will adapt to what you demand of it.”

At 64 years old, Markle is persevering in a passion that pushes her to the limit. And the demands for ultramarathon running — races that go beyond typical marathon length of 26.2 miles — can be tough. 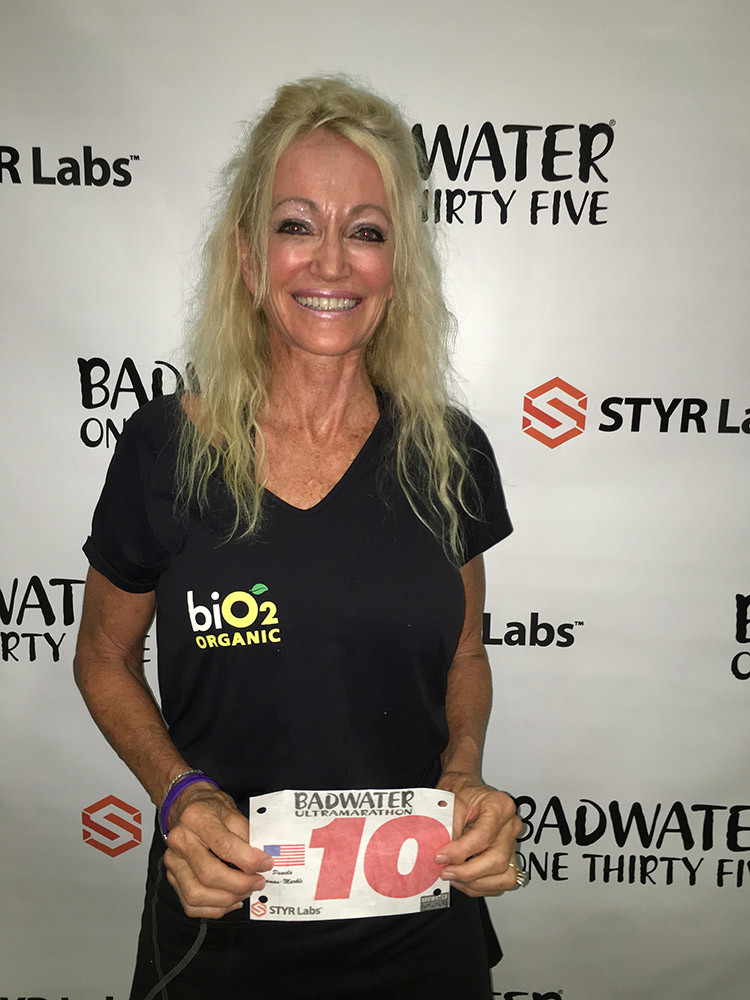 “My current running schedule is very hectic,” said Markle, who runs one long weekend run of up to 25 miles. “Stretching has become a necessity with my aging, and also some strength work.” 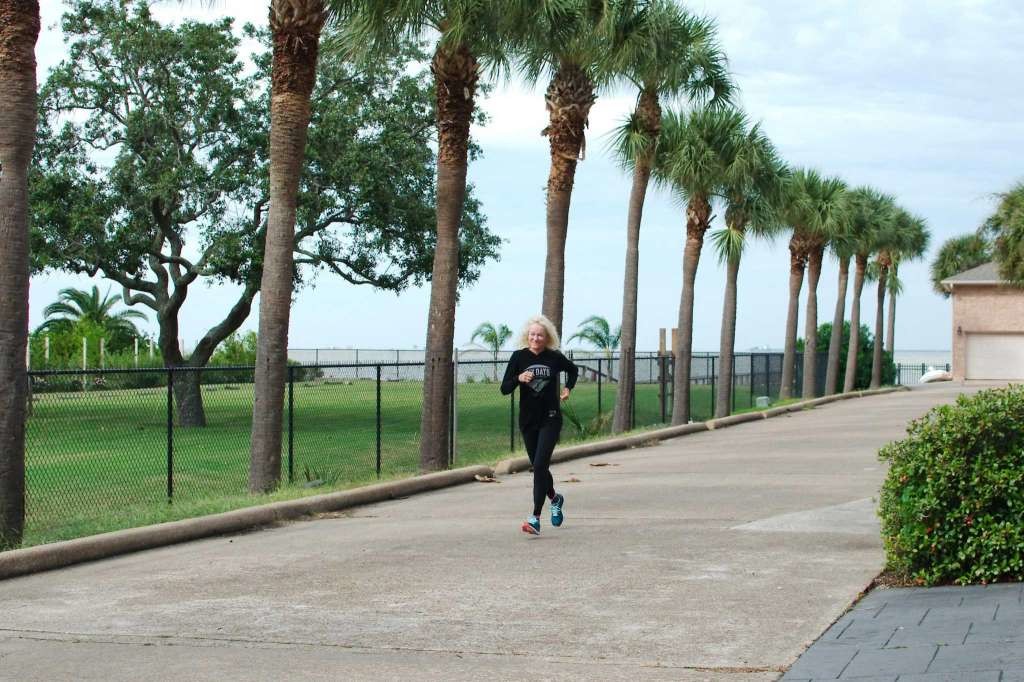 Races often range from 50 to 200 miles, with some lasting for an undetermined distance requiring more from 24 to 48 hours. The courses can be varied from cross-country trail races to repeating single loops on a track.

Most of the races that Markle has completed have been between 50 and 150 miles and last up to 48 hours. She has run almost 40 ultramarathons in the last 10 years.

“I have run nine ultramarathons since January 2019, and I have more to complete this year,” said Markle, who works as a certified registered nurse anesthetist.

Preferring to run by herself rather than in crowds, Markle doesn’t train with a running group and has no time in her schedule for the traditional marathons and 5Ks.

“I am disciplined enough to run alone and love it,” said Markle, who’s also careful to manage her nutrition for running.

Her hard work is paying off. Markle is breaking race records in her age division and earning recognition, including running one of the fastest times of 21 hours and 29 minutes in her age group at a 100-mile road race in Florida.

Markle set another record at the MadCity 100K in Wisconsin, where she won the USA Track & Field National Champion for her age group. She also set records in her age group for the Badwater 135 race, a course that covers 135 miles non-stop across California terrain.

Chris Kostman, who organizes the Badwater series of ultra running races, said Markle is redefining what’s possible for runners as they age.

“She has broken the women’s 60-plus age group record during each of the four consecutive Badwater 135 races she’s competed in,” Kostman said. “Her performances are plain to see, and we all stand in awe of Pamela.”

She became interested in distance running a decade ago when a surgeon who she knew ran ultramarathons encouraged her to give running a try. Her first race was called the Rocky Raccoon and 100 miles long. Markle trained for nine months.

“I didn’t train properly and had quite a few injuries,” said Markle, who has three daughters and eight grandchildren. “I decided to do another race with a different training program. Then I got hooked.” 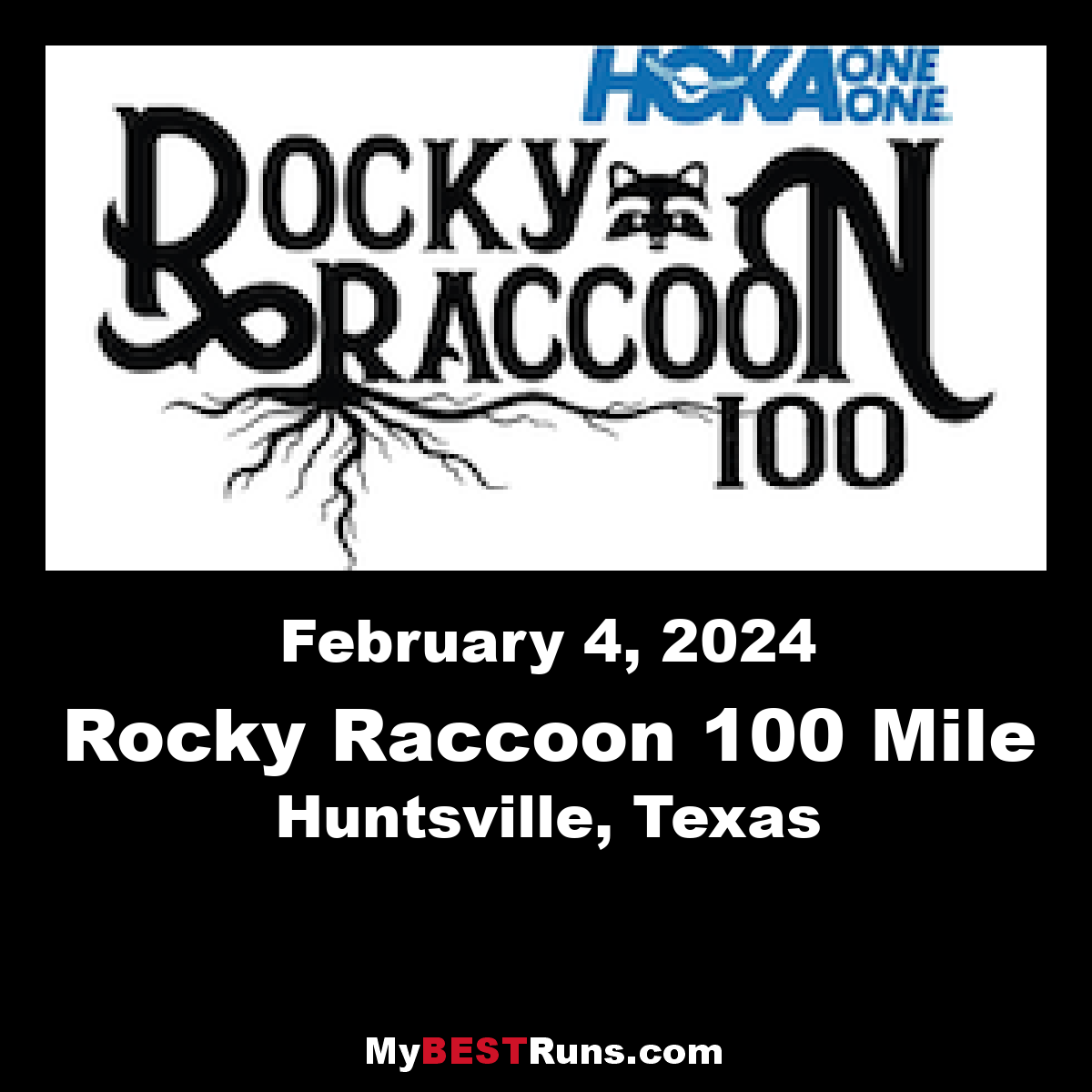 Rocky Raccoon is the fastest 100 mile trail run for men in North America, as well as the oldest running 100 miler in Texas having been first run in 1993 with 29 finishers. It’s described as beautiful, fun, and great for veteran runners as well as those looking for their first 100 mile finish. Any American Citizen may enter the... 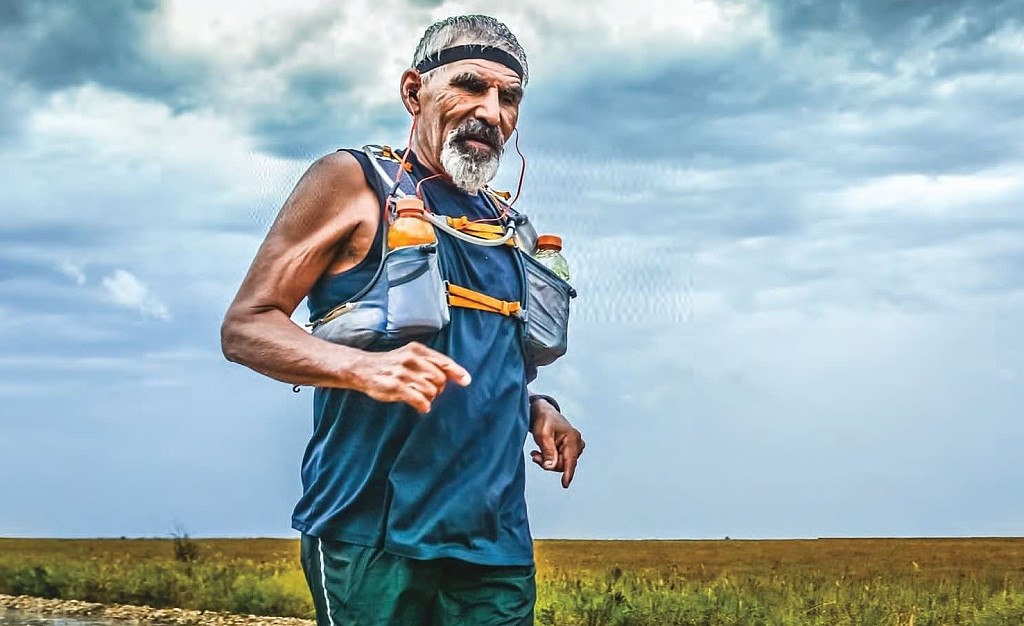 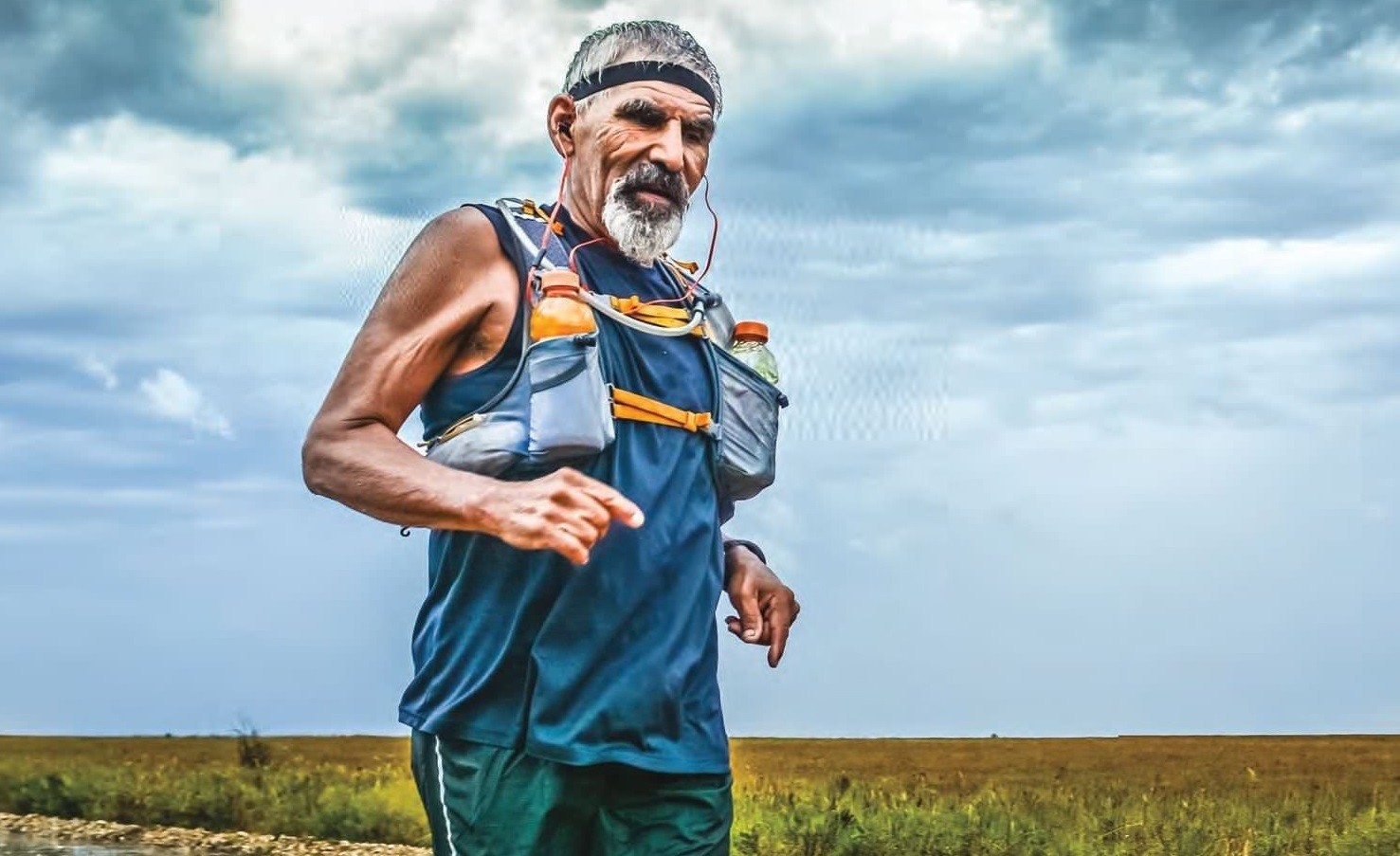 The king of the trails, Rene Villalobos is a 59-year-old plumber with 350 ultras under his belt

Rene Villalobos is less than halfway through the 2016 Rocky Raccoon 100 in Huntsville State Park, Texas, when the pain in his back returns. A year earlier, he had fallen on a patch of black ice late at night during Arkansas’ Run LOVit 100K and slipped a disk. The doctors told him he wouldn’t be able to run long distance anymore but, well, here he was.

He grimaces as pain shoots up his back. Soon the sun will sink beneath the canopy of oak trees and sweet gums overhead and out of sight. Villalobos uses a few unprintable words to gripe to his “friend” Sal (James Salvador), an Italian ultrarunner who encouraged Villalobos to quit dropping the F-bomb on long miserable runs and find the joy in running.

“Look at this and this and this,” he would tell Villalobos, pointing at the scenery. “And don’t worry about anything else. Enjoy it! This is all a gift.”

Salvador had passed away nearly 10 years prior, in April 2002, during a low-risk planned surgery. He and Villalobos had been running together for 20 years by that time, and were planning to run several ultras together in the coming weeks. Instead, Villalobos found himself and his sister, Clara, with Salvador’s family as the priest read his last rites.

Villalobos says he’s “not really too much into superstition.” He doesn’t have pre-race rituals or lucky socks. But he does have a lot of running buddies like Salvador who have passed away over the years, and he still communicates with them.

“That’s probably about the weirdest thing I do,” he says. “I always say, ‘Well, I’m going to take my angels for a run today.’”

Rene Villalobos, 59, of Fort Worth, Texas, is not your typical runner-looking dude. He has dark skin, bronzed by hours in the sun, salt-and-pepper hair and a goatee to match; until a few years ago, he weighed over 200 pounds and possessed a hefty paunch. 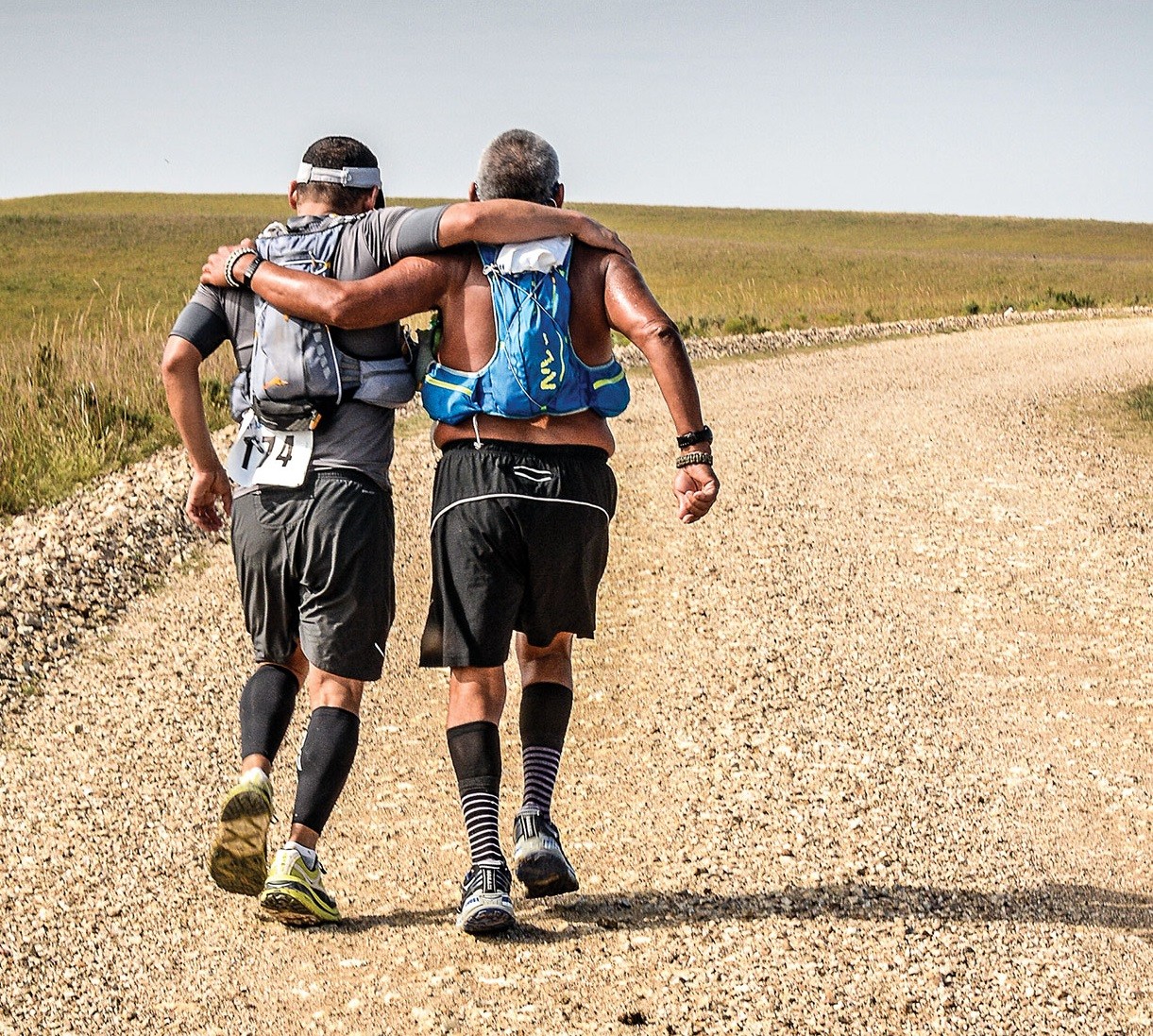 But looks may be deceiving in his case. Villalobos has run over 350 ultras, and over 150 100-milers. At one point, he ran nine 100-mile races in nine weeks. Counting unofficial races, by August 14, 2018 Villalobos says he had run 1,117 marathons. On the Mega Marathon List, he is ranked number five, with 1000 official marathon finishes. Let those stats sink in.

“Trying to explain Rene is almost as difficult as trying to explain trail running,” says Joe Prusaitis, the former longtime owner and race director of Tejas Trails, a collection of respected Texas races that includes Rocky Raccoon. Prusaitis has a long history of racing with and hosting Villalobos at races. “And I think the more you understand trail running, the more you would understand Rene.”

While not a household name or podium contender, Villalobos epitomizes a passionate approach to trail running. His training weeks might make even the pros blanch especially because, for over 30 years, he worked digging ditches and fixing pipes as a plumber, often in 110-degree Texas heat, before going on his weekday runs.

Things changed in 2004 when he got a job as Master Inspector for his hometown of Fort Worth. While he appreciates the air conditioning, being what he calls a “blue-collar runner” makes him proud, and he still does plumbing jobs for friends on the side.

At the 2016 Rocky Raccoon volunteers and spectators caught sight of a Hispanic guy using a thick stick as a cane, moving slowly into the clearing. He’s obviously struggling—his stride is off, and he’s using the stick only halfway into the race. But he doesn’t stop. Villalobos hobbles back into the woods for his third lap, and, when he emerges again, he goes right on for the fourth.

Volunteers watch with concern and hope. The finish line looks increasingly like a ghost town as people pack up and go home.

In the woods, Villalobos repeatedly thumps the stick beside him like a third leg, occasionally griping to Sal, when no one else is around. He shuffles down the singletrack, over little wooden bridges, through brush and pine needles and endless roots as the sun rises.

“Pine trees and roots, that’s all it is,” Villalobos says. “What happens is you do four laps, and on the last lap all the roots have grown a foot.”

When he exits toward the finish for the last time, he is hunched over his stick, barely taking steps. He looks like he’s aged several years in a single night. In the miles since the last aid station, he’s fallen 20 minutes behind the cut-off time.

But he has “finished.” Racers and volunteers have tears in their eyes as he crosses the line. He doesn’t get an official finish time, but the race organizers give him a finisher’s belt, “because they said I was tough,” Villalobos says.

“When he sets out to do something, he just finishes it,” Villalobos’s running buddy Gerardo (Gerry) Ramirez says. “We’ve been through some races, in snow, like knee-deep snow, races where we’re drenched in mud; we’ve been hailed on, but I’ve learned not to give up because of him.” 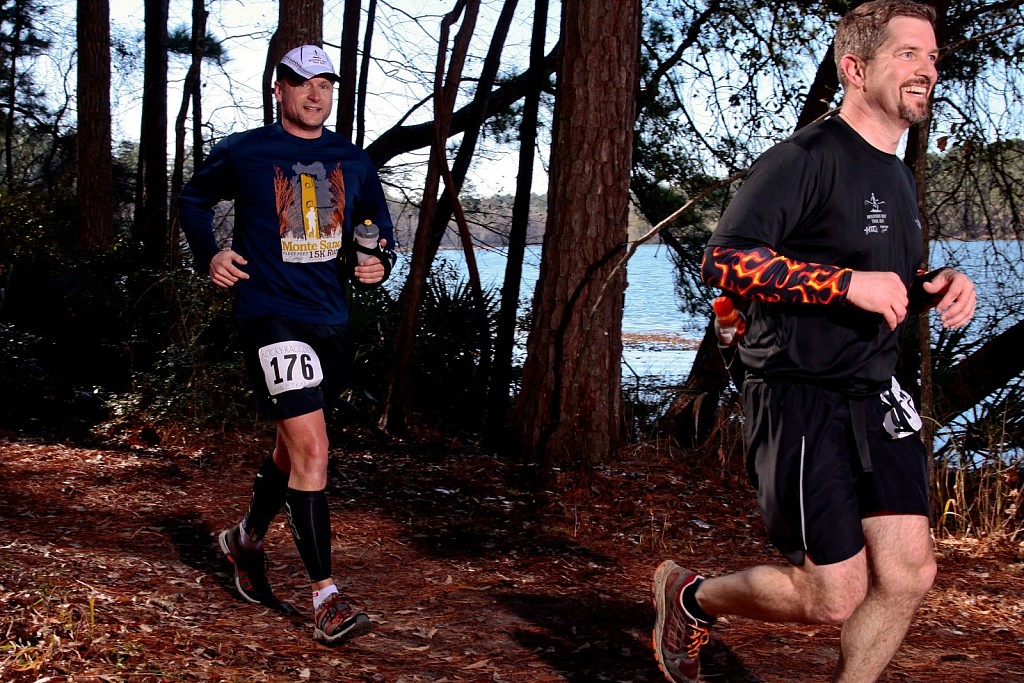 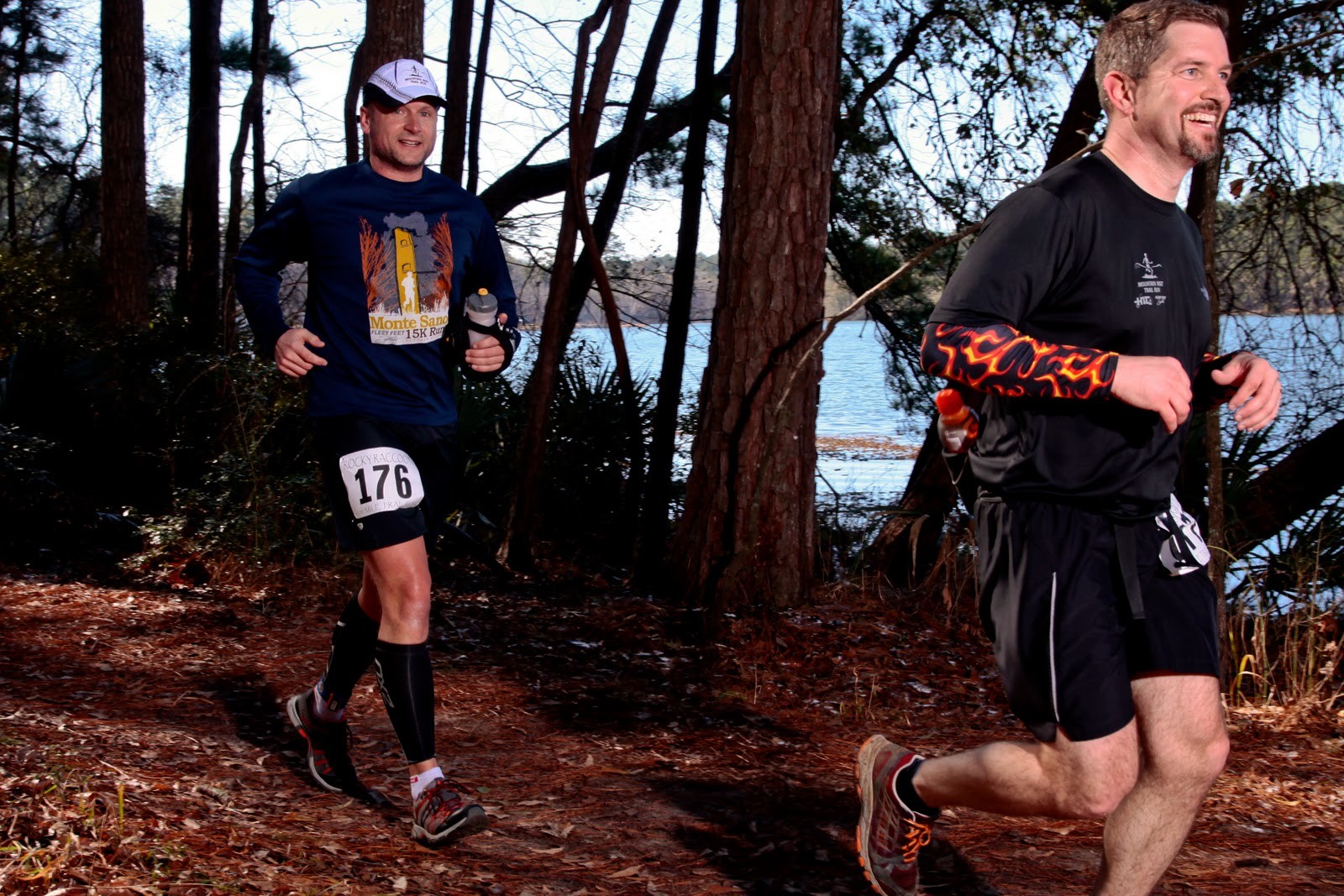 On February 3rd and 4th in Huntsville, Texas Tejas Trails will host the USA Track & Field (USATF) 100 Mile Trail Championships and 26th running of the Rocky Raccoon 100 mile. Race Director Chris McWatters, “this race just gets cooler and cooler each year! I think it’s largely due to the combo of how many of the top performing open and masters runners show up...” Rocky Raccoon is the fastest 100 mile trail run for men in North America, as well as the oldest running 100 miler in Texas having been first run in 1993 with 29 finishers. (01/31/2018) Views: 1,150 ⚡AMP