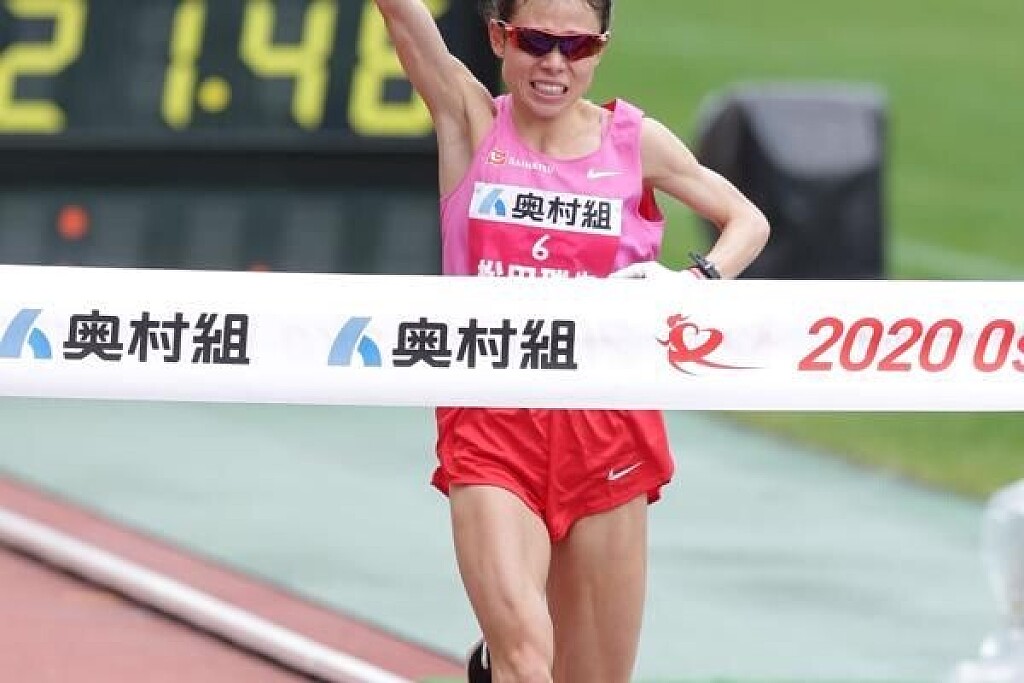 Mizuki Matsuda broke the race record at the Osaka Women’s Marathon on Sunday (30), improving her PB to 2:20:52 to win the World Athletics Elite Label event.

Her time beats the 2:21:11 event record which had been set by Mao Ichiyama last year and moves her to fifth on the Japanese all-time list. It is also the second-fastest time by a Japanese athlete in Japan, behind Ichiyama’s 2:20:29 set in Nagoya in 2020. 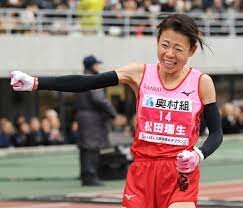 Matsuda was followed over the finish line by Mao Uesugi, Natsumi Matsushita and Mizuki Tanimoto, as the top four all dipped under 2:24.

Before the race, Matsuda had explained how her goal was to win the race with a performance that would help her to secure a spot on the team for the World Athletics Championships in Oregon later this year. After winning in Osaka in 2020 with 2:21:47, Matsuda had later missed out on a place at the Tokyo Olympics when Ichiyama ran faster in Nagoya.

“I could not attain my goal today,” she said after the race, with beating Ichiyama’s 2:20:29 a likely aim. “I am happy that my hard training paid off well.

“I think the result was good because I ran aggressively from the start. I just hope that I will be selected for the World Championships team. During the race, I was imagining myself running in Eugene, thinking: ‘How would the world-class runner run at this stage of the race?’”

Despite the pandemic, the event in Osaka was able to go ahead as planned, under good conditions with little of the expected wind.

Matsuda and Uesugi had run together behind the three male pacemakers until just after 25km, passing 10km in 33:02 and half way in 1:09:57 – a half marathon PB for Uesugi.

Matsuda went on to cross the finish line in 2:20:52 to achieve her third Osaka Women’s Marathon win after her victories in 2018 and 2020, maintaining her unbeaten record in the event. 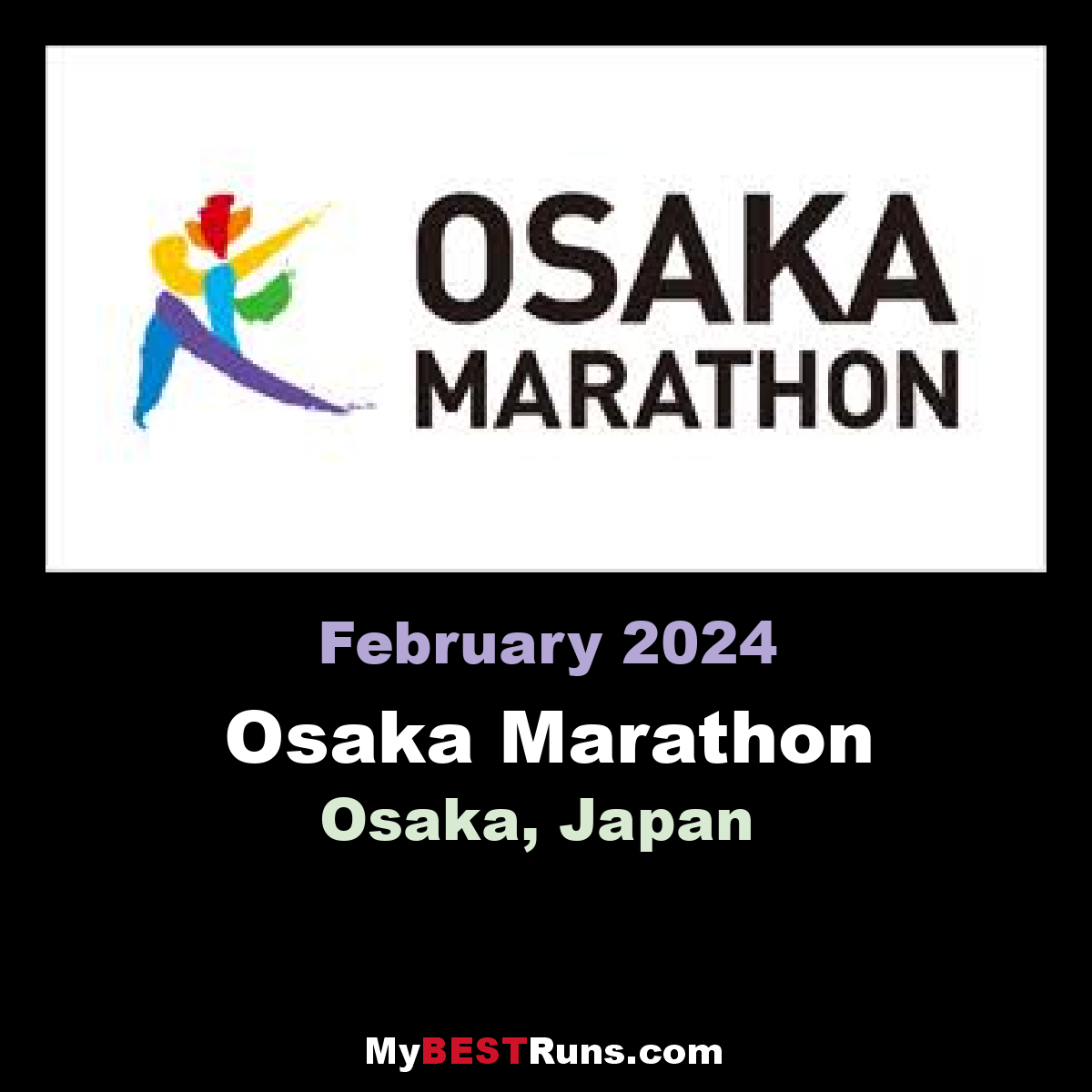 Let’s run for fun in the shadow of Osaka Castle, the symbol of the city!This is a fun running event, which welcomes international runners from all corners of the global alongside families, friends and Japanese runners; all running together through the colored leaves of Osaka Castle Park on a crisp autumn morning. The fun and pleasure of running is universal! ... 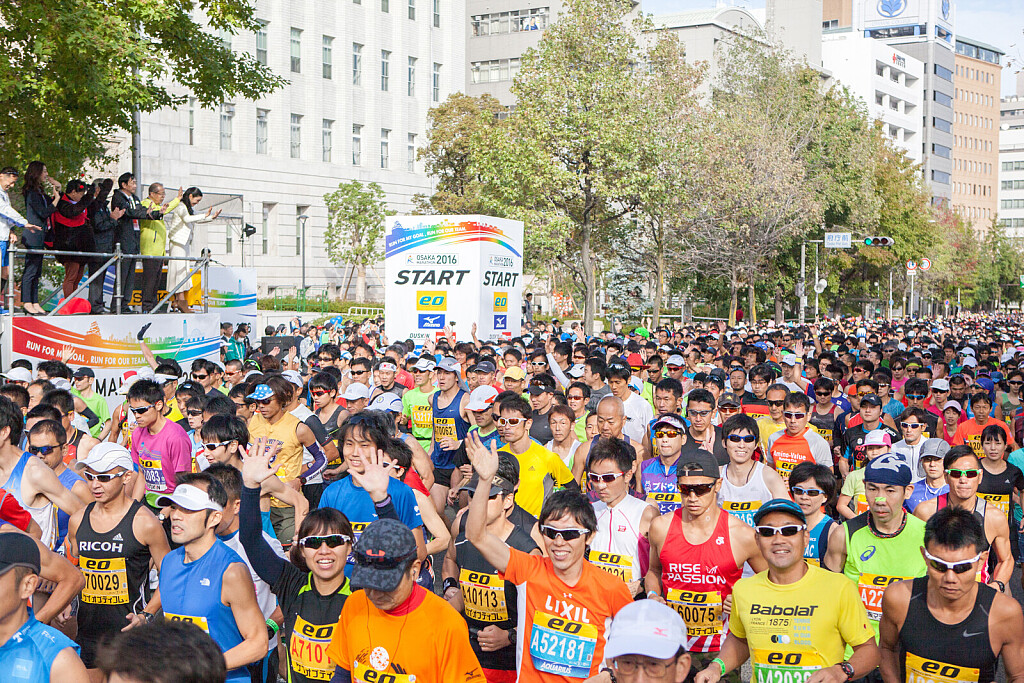 2022 Osaka Marathon Will Cut Mass-Participation Field of 20,000 due to the pandemic

On Feb. 15, Osaka governor Hirofumi Yoshimura indicated that the mass-participation field of 20,000 for the Osaka Marathon's 10th running on Feb. 27 is to be cut and that the race will go ahead with only its elite field of 300. The race is jointly organized by the Osaka metropolitan and prefectural governments.

In response to a question from a reporter, Governor Yoshimura stated, "The final decision is to be made by the organizing committee, but I believe that the mass-participation component of the Osaka Marathon will be canceled. I'd like to express my regret to all the amateur runners who had prepared for this race with anticipation, but given the current reality of the pandemic numbers, from the perspective of combatting further spread of the virus I ask for your understanding of the decision to cancel." 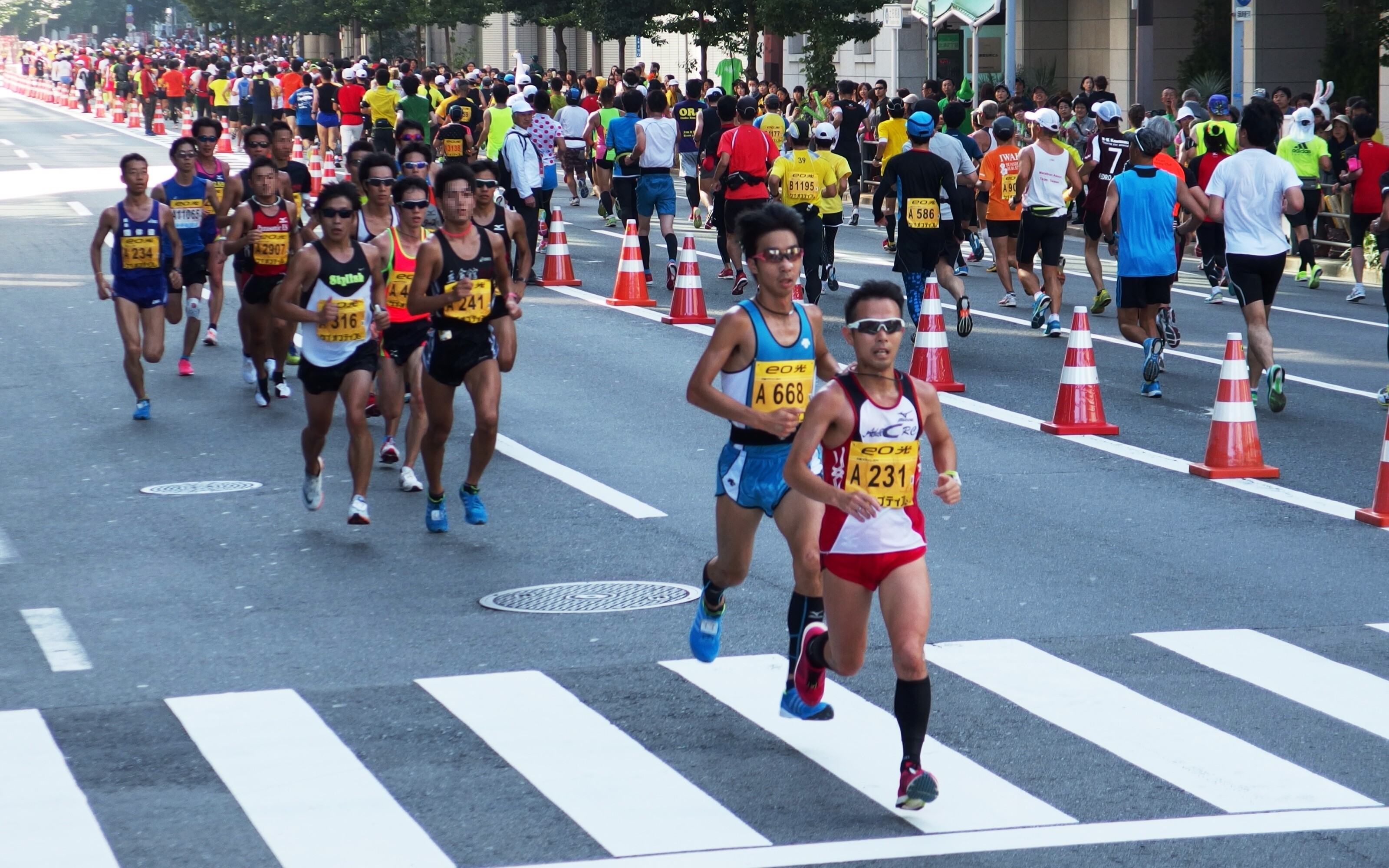 With regard to refunding entry fees, the governor said, "That is a decision to be made by the organizers, but I think refunds should be given to those who want them. There will also be those who want to roll their entries over to next year, so I think that a system must be put in place to accommodate individual choices." 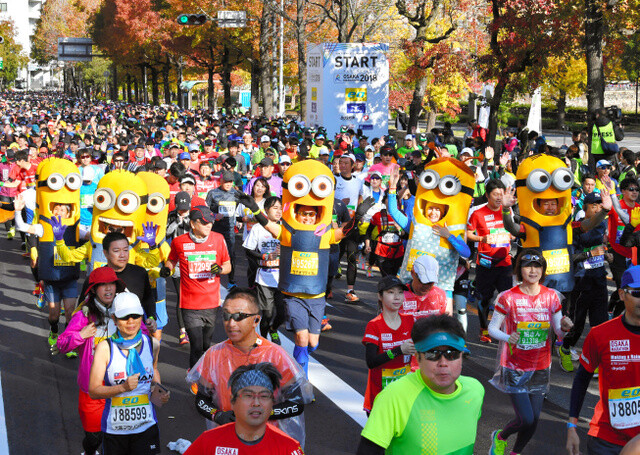 This year the Osaka Marathon is set to expand its elite field, incorporating the organization of the now-defunct elite men-only Lake Biwa Mainichi Marathon. The elite race plays a key role in international competition. As part of the JAAF's new Japan Marathon Championships series it helps determine national teams for both this year's Oregon World Championships and Hangzhou Asian Games.

It is also a crucial part of qualification for the Marathon Grand Championship 2024 Olympic marathon trials. Governor Yoshimura expressed his support for the elite race going ahead, saying, "The level of competition is very high, and it is part of national team selection."

Let’s run for fun in the shadow of Osaka Castle, the symbol of the city!This is a fun running event, which welcomes international runners from all corners of the global alongside families, friends and Japanese runners; all running together through the colored leaves of Osaka Castle Park on a crisp autumn morning. The fun and pleasure of running is universal! ... 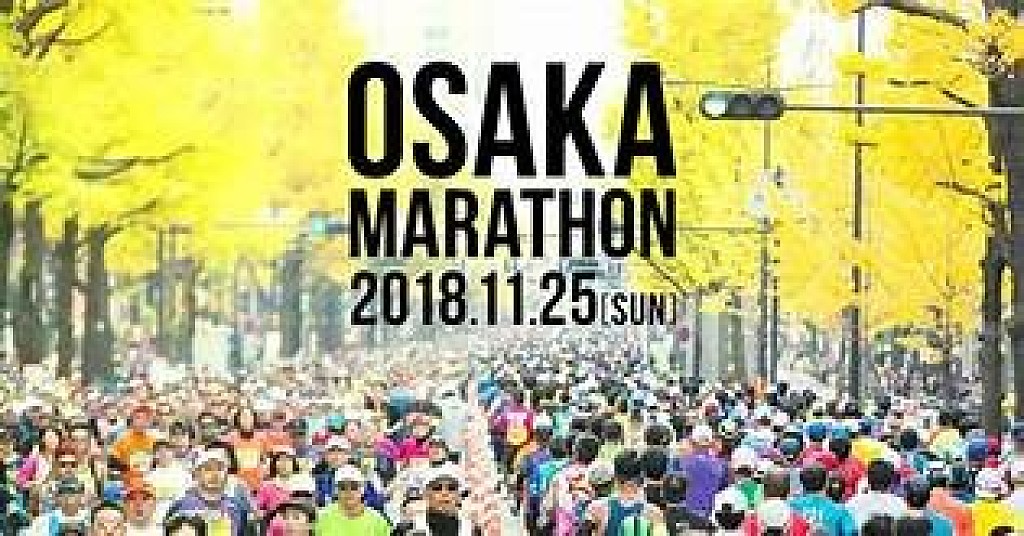 Moroccan Soud Kanbouchia took the top spot in Japan's second-biggest marathon Sunday Nov 25, breaking the Osaka Marathon women's course record to win in 2:31:19. In the early going Kanbouchia had company from Hiroko Yoshitomi and Kasumi Yoshida on mid-2:27 pace, but with a surge at halfway she was on her own and stayed that way until the finish. Yoshitomi, this year's Boston Marathon 10th-place finisher who set a PB and CR of 2:30:09 two weeks ago at the Fukuoka Marathon and, incredibly, won the Ohtwara Marathon on Friday in 2:37:22, dropped off after 10 km to settle into mid-2:30s pace. Yoshida lasted longer but slowed dramatically after 25 km and was quickly retaken by Yoshitomi. But from the main pack of women behind them club runner Haruka Yamaguchi emerged to run both down, running almost even splits to take 2nd in 2:34:12, a PB by over four minutes. Yoshitomi hung on 3rd in 2:34:39, almost three minutes faster than her time 48 hours earlier. Yoshida settled for 4th in 2:35:31.  The men's race saw a five-man lead group made up of Kenyans Charles Munyeki and Julius Mahome, Moroccan Abdenasir Fathi, and Japanese amateurs Shingo Igarashi and Hideyuki Ikegami. Hideyuki dropped off after 15 km before a surprise DNF. After hitting halfway in 1:05:22 Fathi surged to gap the rest of the lead group, from which Mahome became detached after 25 km.Munyeki and Igarashi worked together the rest of the way, and when Fathi began to fade after 30 km they started to reel him in. By 37 km they overtook him, and it went down to the very last kilometer before Munyeki dropped Igarashi to take the win in 2:14:11. Igarashi was 2nd in 2:14:19, the second-fastest time of his career. Fathi hung on to 3rd in 2:17:37, finishing just 20 seconds ahead of Akihiro Kaneko who took 31 seconds off his best for 4th in 2:17:57.   (11/25/2018) Views: 1,150 ⚡AMP 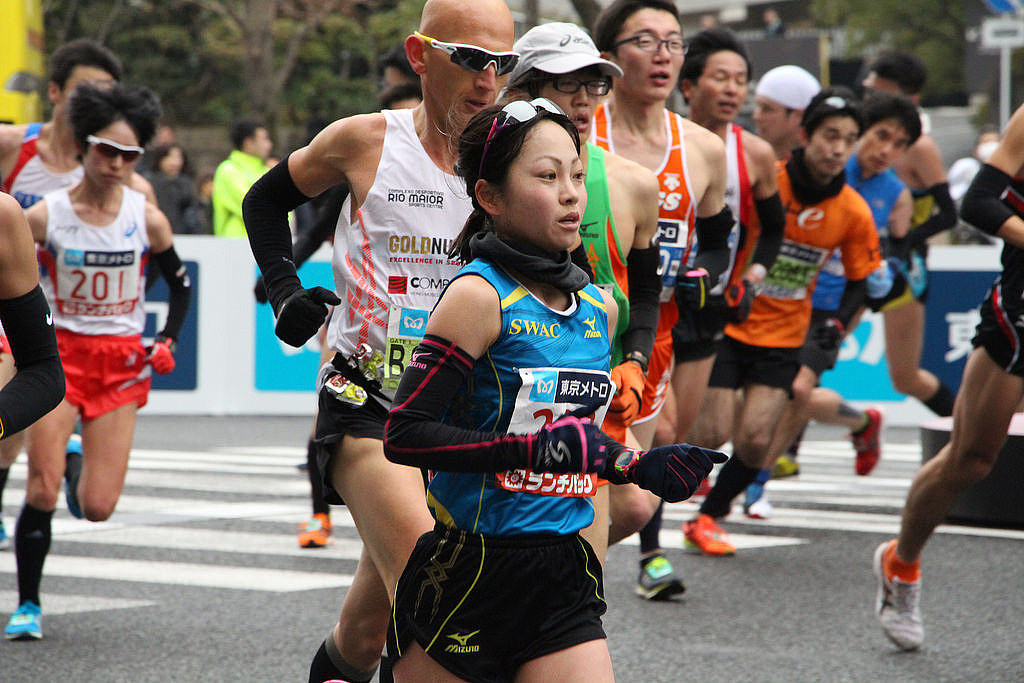 One of the world's ten biggest marathons with nearly 30,000 finishers, the Osaka Marathon takes place Nov. 25. At the elite level Osaka has carved an interesting place for itself as a sort of unofficial amateur Japanese women's national championships, with just about all of Japan's sub-2:40 amateur women entered. 2017 winner Yumiko Kinoshita, leads six of last year's top seven including Mitsuko Ino, who finished just one second behind Kinoshita, and 2016 Osaka winner Yoshiko Sakamoto. But they have serious competition ahead of them this time in the form of quasi-corporate leaguer Hiroko Yoshitomi. Moroccan Soud Kanbouchia. First-timer Felista Wambui is a wildcard. The high-volume racer Yoshitomi is the heavy favorite, the only question really being whether she can finally break 2:30 for the first time. The men's side of the equation has more of an international contingent, featuring three Kenyans led by 2018 Copenhagen Marathon winner William Morwabe, and Moroccan Abdenasir Fathi. But as in the women's race the number one seed is a Japanese runner, in this case 2014 Incheon Asian Games silver medalist Kohei Matsumura. Matsumura has had a rough time since then, but a 2:11:04 at last year's Lake Biwa suggest he's heading back in the right direction. His strongest domestic competitors are 2017 Osaka runner-up Hideyuki Ikegami and 2016 Katsuta Marathon course record-setter Shingo Igarashi.  (11/13/2018) Views: 1,431 ⚡AMP