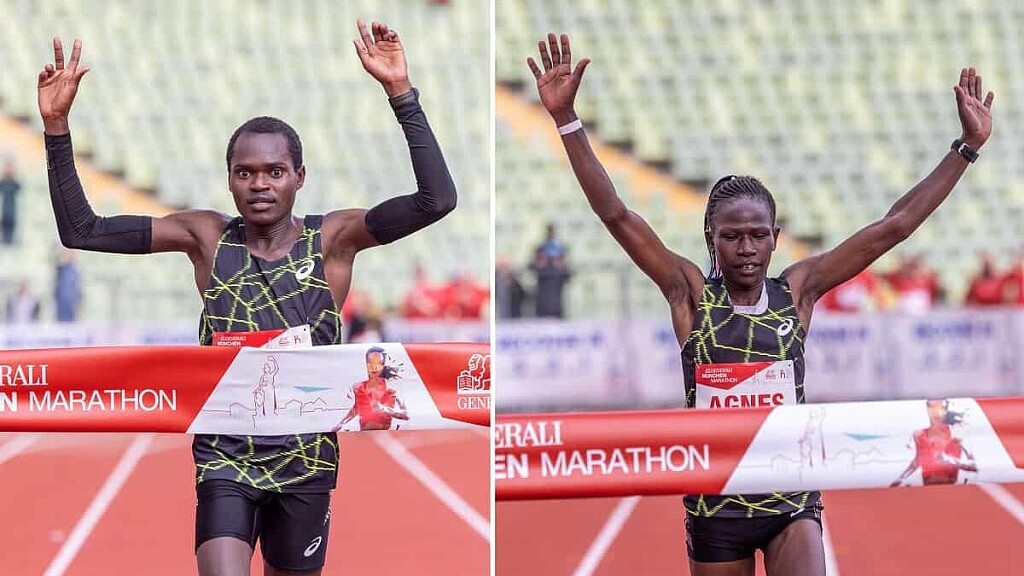 Both course records were smashed during the comeback of international elite runners at the Generali Munich Marathon.

Kenyan debutant Philimon Kipchumba crossed the finish line in Munich’s Olympic Stadium in 2:07:28. Behind him the 23 year-old Mengistu Zelalem of Ethiopia and Eritrea’s Berhane Tesfaye followed in 2:07:56 and 2:08:10 respectively – times that were well faster than the previous course record of 2:09:46. Fourth placed German Sebastian Hendel ran a fine debut with 2:10:37. 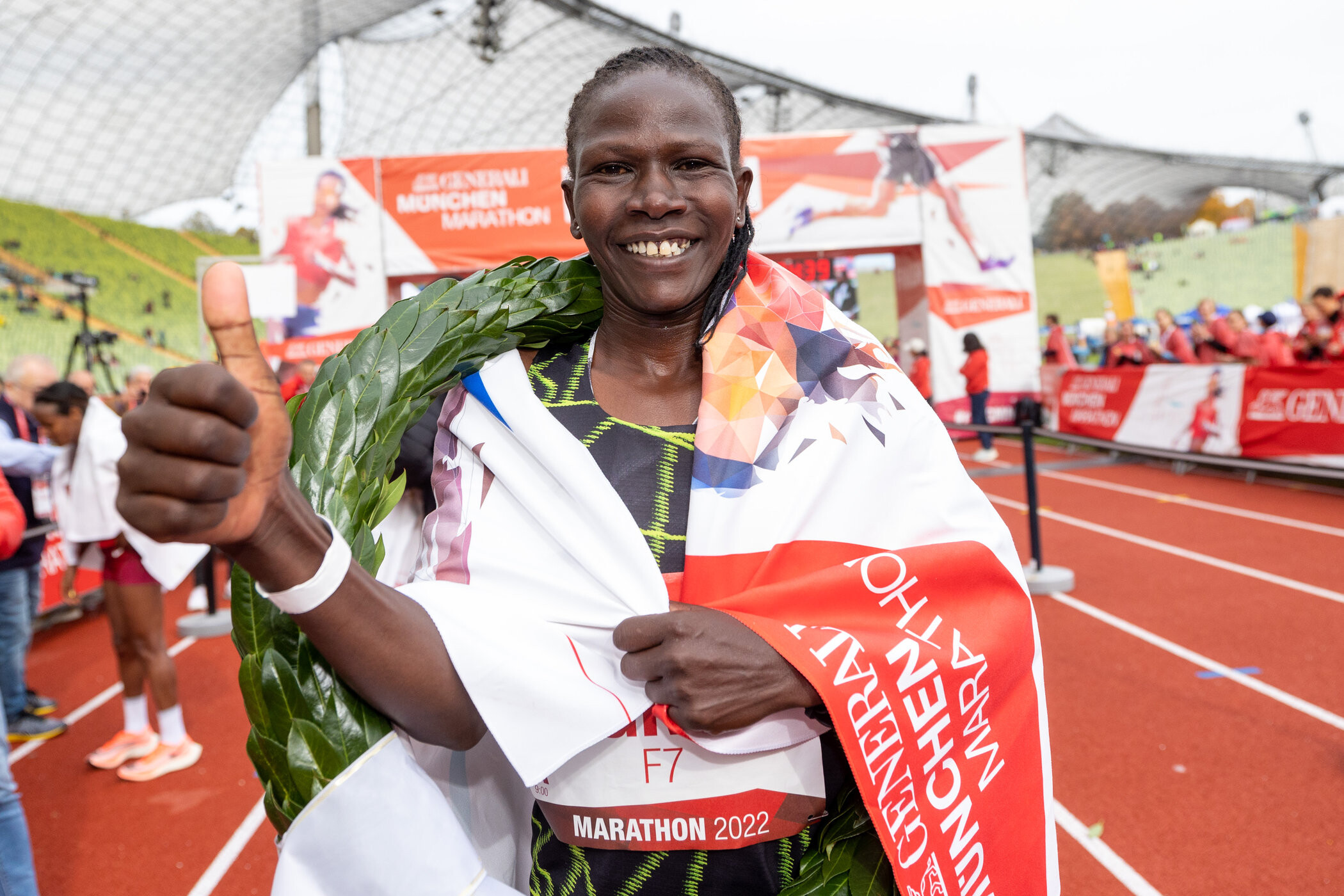 There was a triumph for Kenya in the women’s race as well: Agnes Keino clocked a personal best of 2:23:26, improving the course record by almost nine minutes. The 34 year-old was ahead of the 2015 marathon World Champion Mare Dibaba. The Ethiopian ran 2:24:12 while Souad Kambouchia of Morocco finished third with 2:27:35. Seven women were inside the former course record of 2:32:11.

A total of 18,322 athletes entered the 36th edition of the Generali Munich Marathon, which is a World Athletics Elite Label Road Race. 4,334 of them were marathon runners. The marathon was started by Frank Shorter, who won the Olympic marathon in Munich in 1972. The American had been invited as a guest of honor by the organizers. 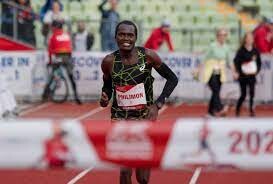 “This was a very special day for the Generali Munich Marathon. We are extremely happy with the great course records. We have reached new dimensions today and we intend to build on this success,“ said Race Director Gernot Weigl. It was the first time in over 20 years that organizers brought back a proper elite field. That was the reason why the long standing course records were smashed by several minutes on Sunday: Kenya’s Michael Kite was the former record holder with a time of 2:09:46 from 2000. Germany’s Susanne Hahn held the women’s mark with 2:32:11 from 2012 when she won the German Championships’ race.

In ideal weather conditions with temperatures of 9 Celsius at the start, hardly any wind and a cloudy sky a leading group of ten runners reached the half marathon mark in 63:41. However Tsegaye Mekonnen was no longer among them. The Ethiopian, who still holds the unofficial world junior record of 2:04:32 and was the fastest runner on the start list, had lost contact shortly before and later dropped out. But a compact group remained together in the lead until the late stages of the race. Five of them passed the 35k mark in 1:45:33. Once pacemaker Bonface Kiplimo of Kenya dropped out shortly afterwards a duel between Philimon Kipchumba and Mengistu Zelalem developed. The Kenyan was then able to put in a surge just before the 41st kilometer and dropped Zelalem. “I did not quite expect to run such a fast debut. But my training went very well and I just tried my best,“ said Philimon Kipchumba, who hopes to achieve times of 2:04 in the future.

In the women’s race Agnes Keino and Mare Dibaba were together in the lead, passing the half marathon point in 71:46 and then 30k in 1:42:01. With around eight kilometers to go Keino, who entered the race with a PB of 2:25:08, went ahead. Former world champion Dibaba, who was the fastest on the start list with her PB of 2:19:52, suffered of muscle problems and was not able to respond to the surge of her Kenyan rival. However Mare Dibaba finished second with 2:24:12, running her fastest time since 2019. “It was my big goal to run a personal best and I am really happy that I achieved it. Even more so since I also won the race,“ said Agnes Keino, who improved to 2:23:26. 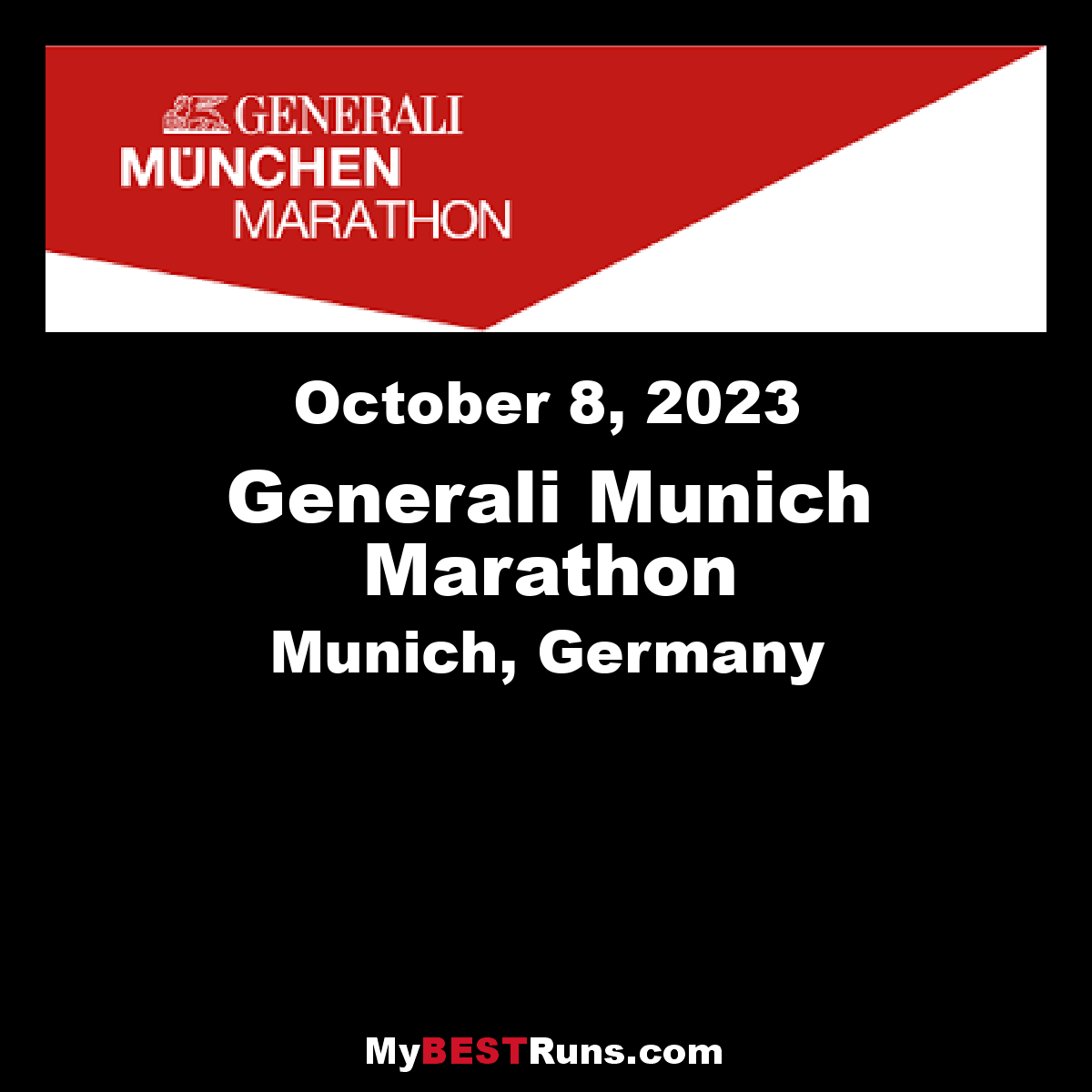 The GENERALI MUNICH MARATHON has held the elite label of the WORLD ATHLETICS since 2020 and the marathon route is officially measured and recognized. The route runs from the Olympic Park and Schwabing to Leopoldstraße with the Siegestor, via Königsplatz and the Pinakotheken to the English Garden. From there past the Chinese Tower and Art Nouveau villas in Bogenhausen, through... 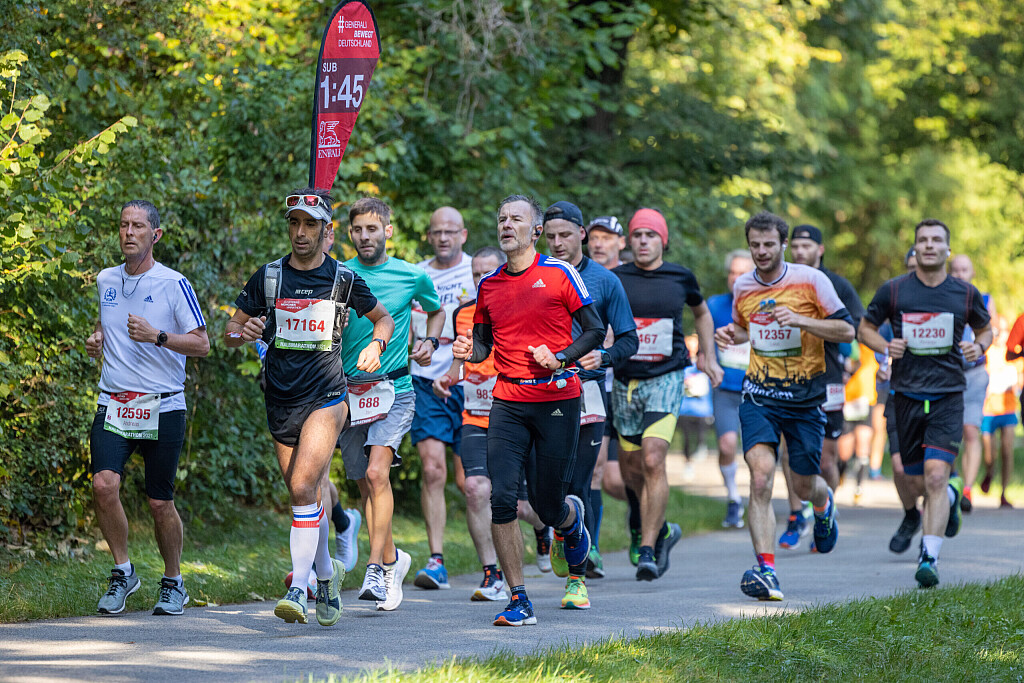 With the strongest field in its history the GENERALI MUNICH MARATHON will take place on Sunday. The unofficial world junior record holder Tsegaye Mekonnen and fellow Ethiopian Mare Dibaba, who was the marathon World Champion in 2015, head the start lists. Their personal bests of 2:04:32 and 2:19:52 respectively make them the fastest runners ever entered in the traditional Bavarian race.

For the first time in over 20 years an international elite field was assembled for the 36th edition of the GENERALI MUNICH MARATHON. Organisers hope that both course records will fall on Sunday. 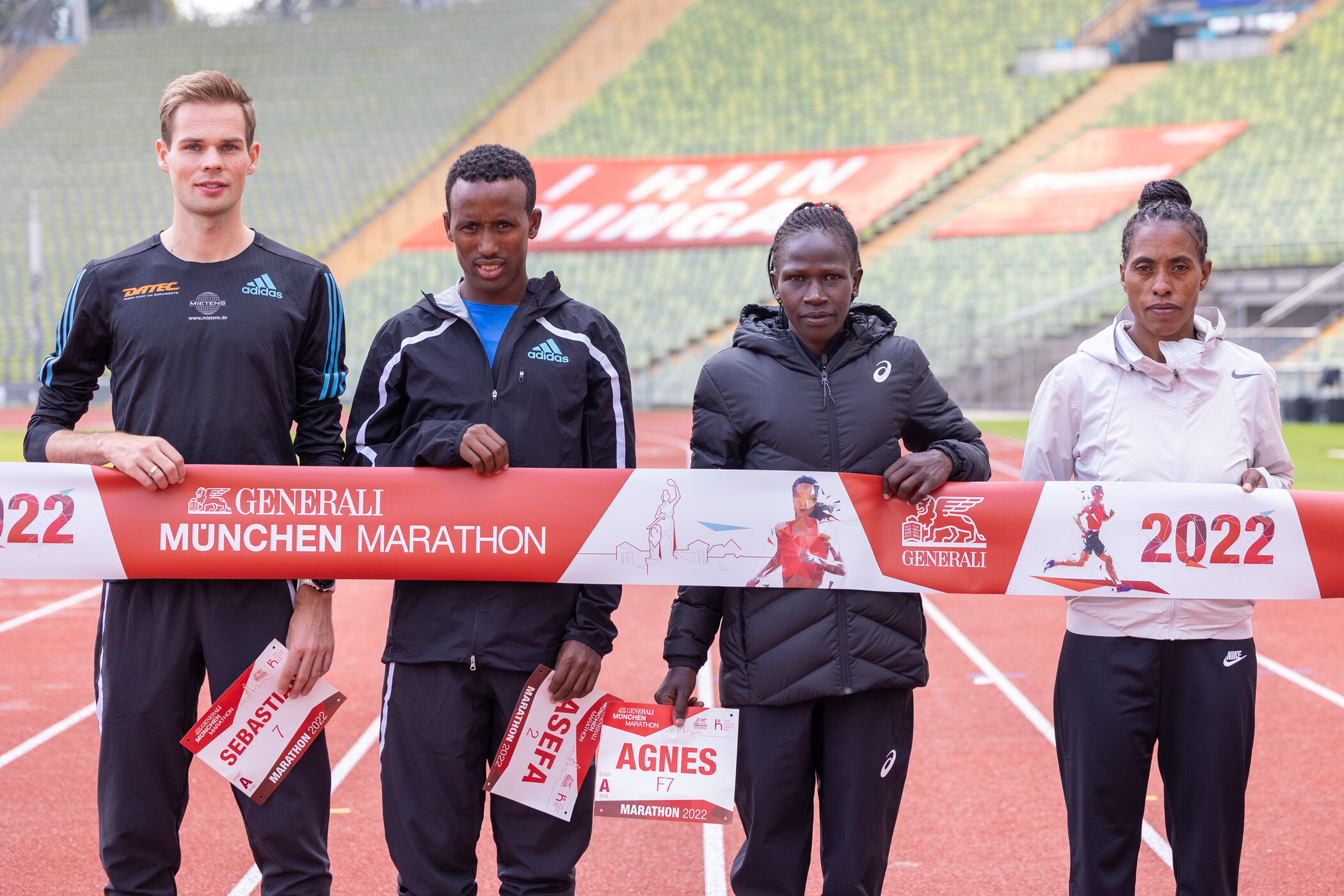 A total of around 18,500 runners are expected total part. About 5,000 of them will run the classic distance which starts and finishes inside the Olympic Stadium. The GENERALI MUNICH MARATHON is an Elite Label Road Race of the international athletics federation, World Athletics. The race will start at 9.00 am on Sunday and a live stream is available at: www.generalimuenchenmarathon.de

50 years after winning the Olympia marathon gold medal in Munich Frank Shorter is back in the city as a guest of honor. “I am very happy to have the opportunity to be back in Munich - the city where I was born in 1947 and where I celebrated my biggest career win in 1972,“ said 74 year-old Frank Shorter.

“We are looking forward to the strongest elite line-up in our history. With the former World Champion Mare Dibaba and the runner who holds the unofficial world junior record, Tsegaye Mekonnen, we managed to get two big names to Munich for the return of the elite fields. Since weather predictions are favourable we hope that both course records will be broken on Sunday,“ said Race Director Gernot Weigl. 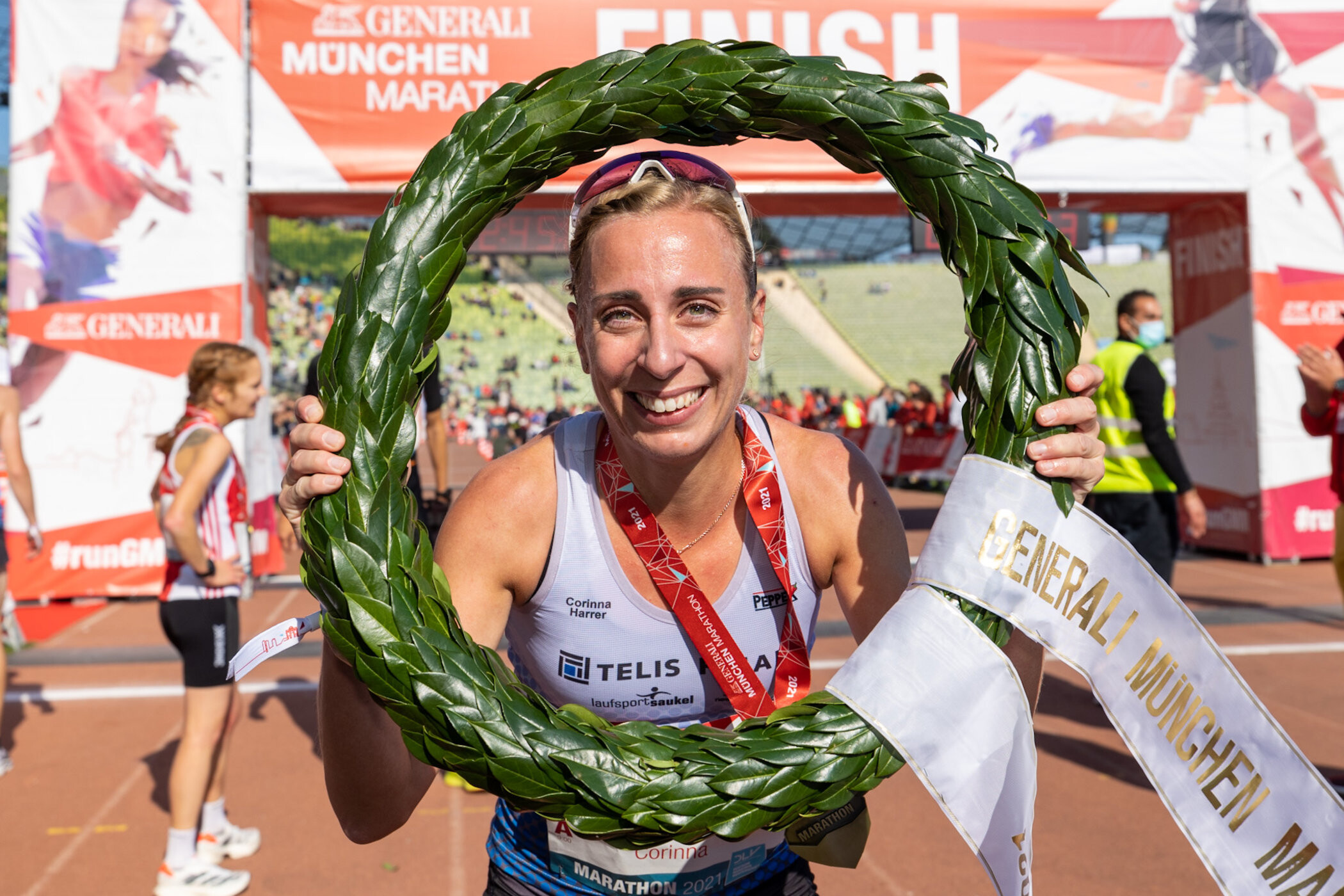 Tsegaye Mekonnen caused a major upset when he took the Dubai Marathon in 2014 aged just 19 years old. His time of 2:04:32 still stands as the unofficial world junior record (World Athletics does not ratify junior records in the marathon). In 2017 Mekonnen also won the Hamburg Marathon. Now 27 years old the Ethiopian has not competed over the classic distance since 2018 and now intends to come back with a strong performance in Munich. “I had injury problems and then the pandemic played its part as well, so I did not run a marathon for three years. Now my training has gone well and I intend to run a 2:06 on Sunday,“ said Tsegaye Mekonnen.

Two other runners are on the start list with personal bests of sub 2:10 and below the 2:09:46 course record: Ethiopia’s  Mengistu Zelalem has a PB of 2:08:48 while Kenya’s Edwin Kimaiyo is in a similar range with 2:09:12. Current a half marathon split time of around 64:00 is targeted for the first group.

A big improvement of the course record seems possible for the women in Munich. Germany’s Susanne Hahn established the current mark of 2:32:11 ten years ago. Mara Dibaba heads the women’s field with a world-class personal best of 2:19:52. Besides the World Champion of 2015 and Olympic bronze medallist from 2016 there are two fellow-Ethiopians who have run under 2:25: Atsede Bayisa has a fine personal best of 2:22:03 and Aberu Zennebe has a PB of 2:24:30. “I have prepared for three months and my goal is to run a personal best“, said Aberu Zennebe. A winning time of sub 2:25might well be within reach on Sunday since it is planned that the first group reaches the half way mark in around 71:30. There are eight athletes on the start list who have run under 2:30.

The GENERALI MUNICH MARATHON has held the elite label of the WORLD ATHLETICS since 2020 and the marathon route is officially measured and recognized. The route runs from the Olympic Park and Schwabing to Leopoldstraße with the Siegestor, via Königsplatz and the Pinakotheken to the English Garden. From there past the Chinese Tower and Art Nouveau villas in Bogenhausen, through...