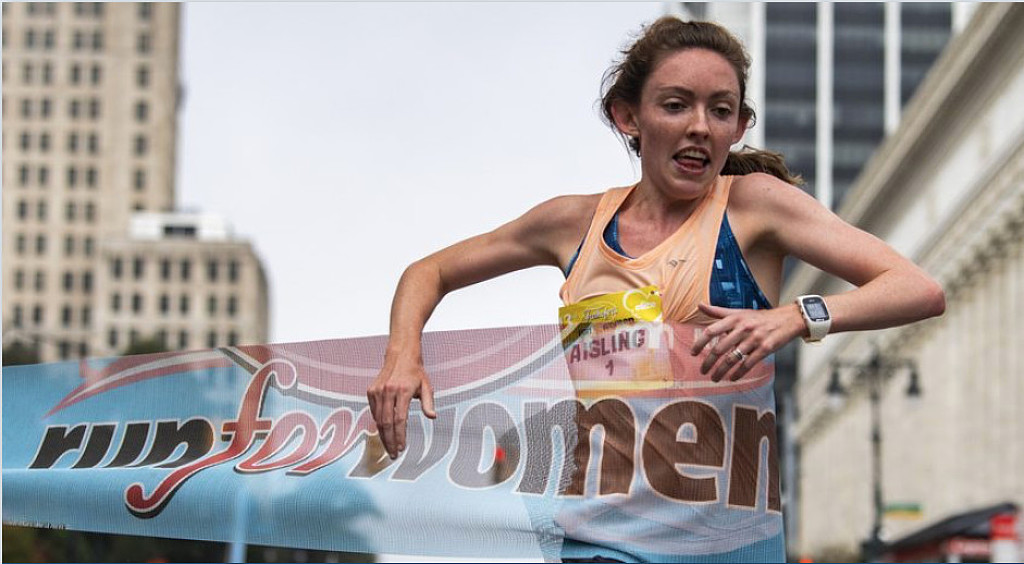 The only reason Aisling Cuffe didn’t get lonely during the 43rd Freihofer’s Run for Women 5k on Saturday is that the race course doubles back on itself.

As she turned right off Sprague Place onto Washington Avenue just before the 4k mark, she allowed herself a smile as she was greeted warmly by a long line of walkers headed in the other direction, having just passed the 1k mark.

By the time the 28-year-old Cuffe passed Henry Johnson Boulevard a long city block later, no runner had appeared turning the corner on Sprague, and that was that. Cuffe polished off the downhill on Washington to the finish and won the Freihofer’s Run in 16:34, a whopping 40 seconds ahead of runner-up Cara Sherman.

A two-time New York State high school champion in cross country for Cornwall Central in 2009 and 2010 who went on to run for Stanford University, Cuffe has raced pretty much everywhere in the state except for the Capital Region, and she made her Freihofer’s Run debut a smashing success by putting the field away early.

“I have a tendency to not start fast enough, so by a half-mile in, I was like, ‘Oh, I don’t think I’m starting fast enough for the pace I want to do,’” she said. “Normally I rely on the field to drag it out of me, and I didn’t feel like the field was doing that, so I thought, ‘I’m going to have to go.’

“And I was super-nervous somebody was going to come back and start kicking it in, so I kept looking and probably shouldn’t have been looking as much as I did.”

The Freihofer’s Run usually is held in early June, but was moved to September for this edition after being contested as a virtual race last year because of the COVID-19 pandemic.

A total of 1,024 runners finished the in-person 5k in comfortably cool, sunny conditions on Saturday, after a thick fog lifted an hour or so before the 9 a.m. start.

The clear conditions didn’t help the elite field find Cuffe, as she got 10 meters of separation by Lark Street a half-mile in and pretty much put the race away with a 5:32 first mile shortly after entering Washington Park.

Cuffe ran the second mile in 5:27 for a 10:59 split and spent as much time watching her step through the rolling hills and twisting turns in the park as anything else.

“It got quieter all of a sudden when I started pushing, and I thought, ‘Oh, did I make a gap already?’” she said. “You can tell sometimes how many people are around you just by hearing, but it wasn’t what I thought. So I was like, ‘What?’ And it thinned out so much … ‘Wow. OK.’ I kept having to press at that point.

“I thought about it [making a push to close the gap], but I was already pressing a little bit early, so I figured I should stay within myself and be patient,” Sherman said.

A two-time runner-up in the 5,000 meters at the NCAA Championships while at Stanford, Cuffe has been training for longer distances this year and said she felt “a little rusty at the 5k distance.”

At Stanford, she was coached by former Section II star Liz Maloy of Holy Names, who hosted Cuffe at her Loudonville home this weekend. Among their shared memories is having run in the state meet, where runners compete in t-shirts color-coded to their section.

“We used to get cotton t-shirts at the state meet, so she had maroon, and I had royal blue, and we were talking about running one of your biggest meets in high school in a cotton t-shirt. We love that,” Cuffe said.

“Oh, my God, they’re my favorite t-shirts. I can’t wear them too much because they’re starting to wear a little thin, so I have to preserve them for my children and grandchildren.”

Sherman, who has run in the colors of Mohonasen High School and the University at Albany, wanted to use the Freihofer’s Run as a stepping-stone to the MVP Stockade-athon 15k, another popular road race that will return to in-person competition on Nov. 14.

“I was a little surprised to finish so far up, but I hit the time I was shooting for. I thought I’d be around 17:15,” Sherman said. “I’m training for the Stockade-athon right now, so I was using this as my first test effort, sort of. So I just wanted to see where I was at.”

It wasn’t long ago that Sisson was running in the Capital Region, as she was second to another former UAlbany standout, Hannah Reinhardt, at the 2018 America East Conference cross country championship meet, while Sisson was at Stony Brook.

“My coach Kurt Benninger, Molly Huddle’s husband, he knew of this race and thought it would be a good opportunity to test my fitness, see where we’re at heading into the fall,” Sisson said. “And it was great, I had so much fun. I knew Aisling was coming in, so that was fun. We were like, we’re probably going to have to let her go.”

Sascha Scott of Syracuse won the masters division while finishing 10th overall in 18:17.

Under a reconfigured prize structure that offered a deeper distribution, Cuffe earned $3,000 for the victory.

She said she especially appreciated the women-only race, though, for some of its other touches, like running into the walkers on the way back and the fact that race director Kristen Hislop announced to the field before the start that the age range in the race ran from 9 to 93.

“I love races like this, especially when you get to see other people in the race doing it as well,” she said. “Even at the start, when Kristen was announcing the race and the oldest person and the youngest. I love that stuff, I could listen to that all day long, the number of people that come out and share in the sport of running and racing having fun together. It’s so motivating and inspiring.” 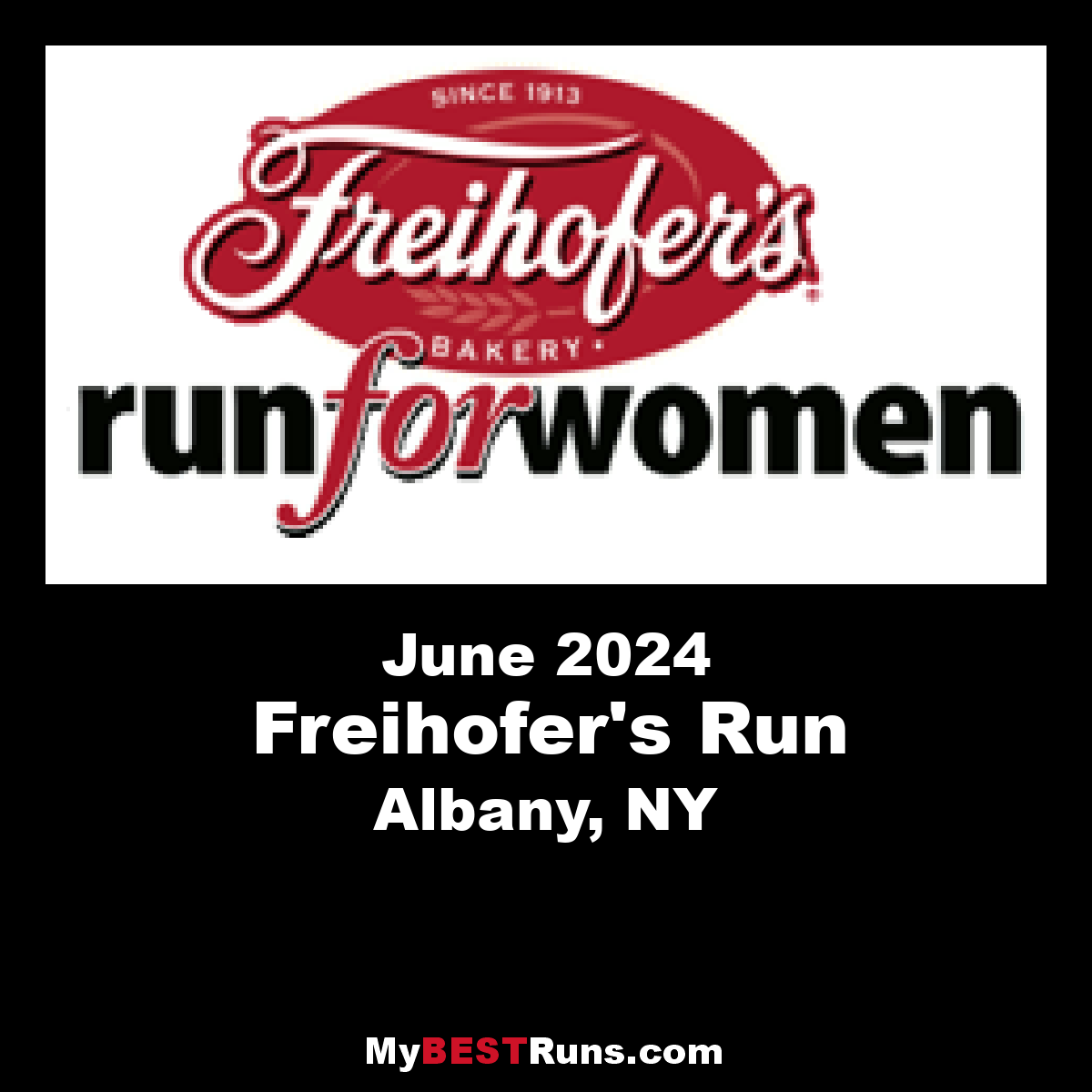 Freihofer's, a leading baker of wholesome products, is committed to fostering the growth and recognition of women in sports and inspiring all generations of women to experience the benefits of exercise and good nutrition. That's why we're proud to sponsor the annual Freihofer's Run for Women 5K -- one of the world's largest and most prestigious all-female road races. TheRace... 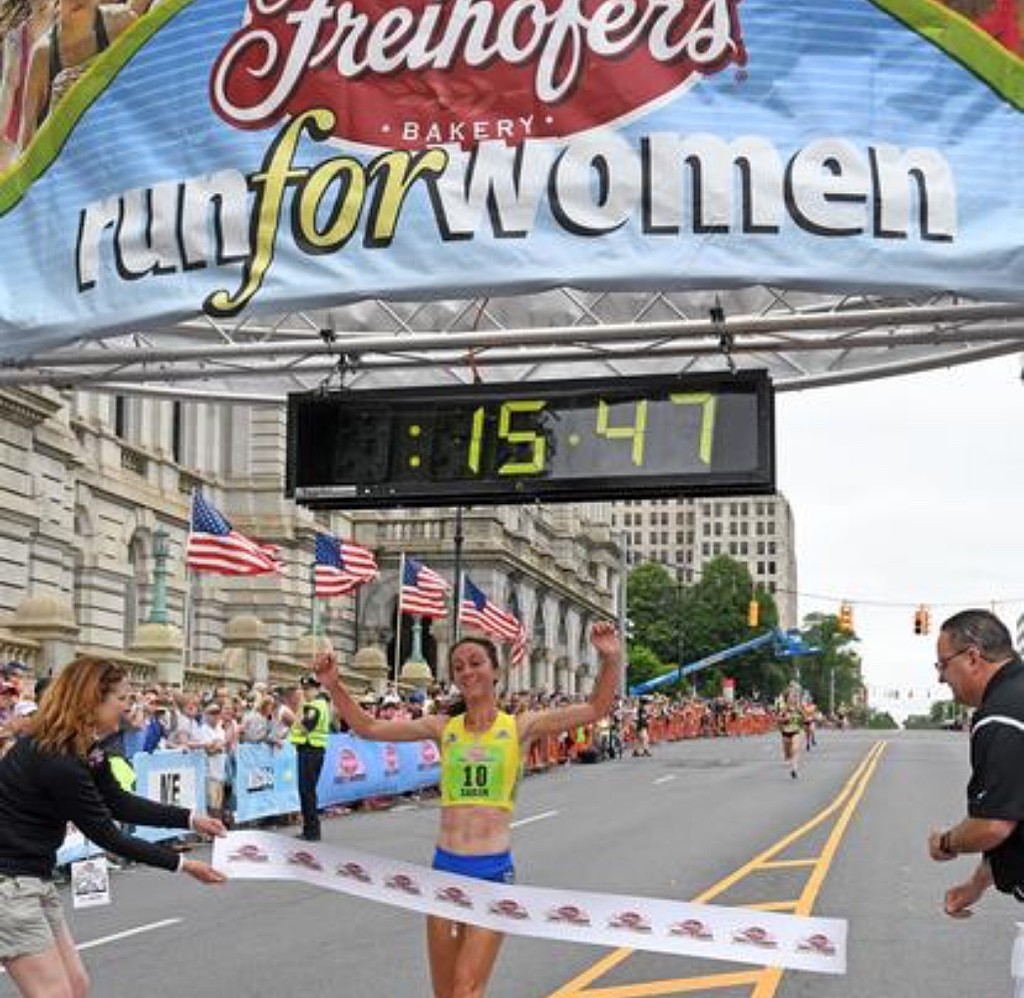 Sarah Pagano of Brighton, Mass., surged to the lead in the final 400 meters and won the 40th annual Freihofer’s Run for Women with a time of 15 minutes, 48 seconds on Saturday June 2 in Albany New York.     The 26 -year-old was the first of 3,567 participants to complete the 5K course. She earned a $10,000 prize and matched her personal 5K record. “I’m really happy,” said Pagano, who runs for the Boston Athletic Association. “I came in and just wanted to compete and not worry about anything else, just do the best I could. I’m really happy to be able to come away with the win.” Pagano, who ran track at Syracuse University and was the 2012 Big East outdoor 10,000m champion, was five seconds ahead of runner-up Steph Bruce (Flagstaff, Ariz.). Diane Nukuri (Flagstaff, Ariz.), a three-time Olympian representing her native Burundi before becoming a U.S. citizen last year, led for most of the race and placed third. (06/03/2018) Views: 1,371 ⚡AMP 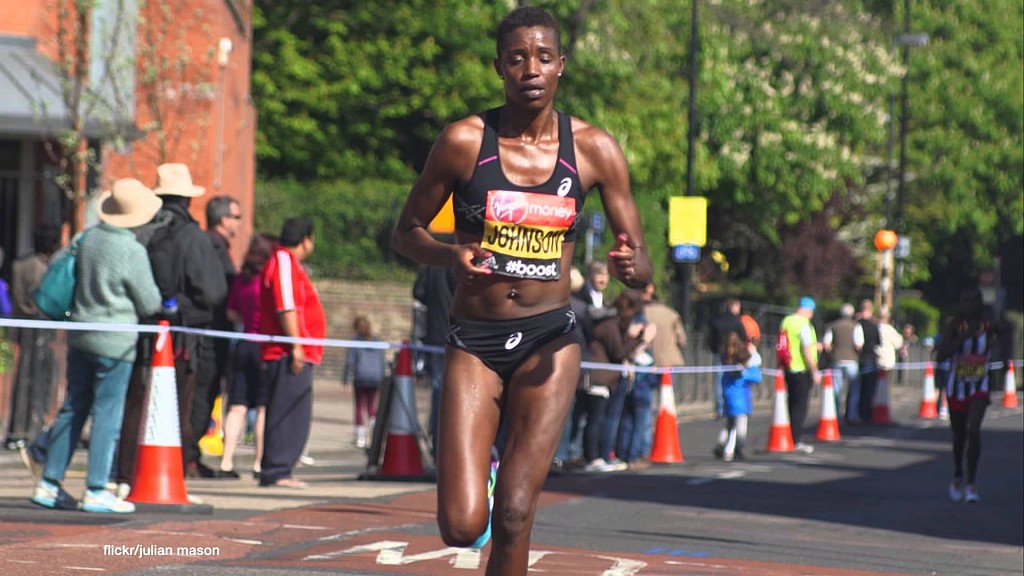 Three-time Olympian, Diane Nukuri, is the favorite in Saturday's race after getting U.S. citizenship. Her American citizenship gives Nukuri, 33, a reason to return to the Freihofer’s Run for Women in Albany, which will celebrate its 40th anniversary on Saturday. She last participated in 2015, the year before Freihofer’s reverted back to an all-American field. Freihofer’s made the change to support U.S. distance running and in response to international doping scandals that rocked the sport. Nukuri appeared at Acadia Middle School in Clifton Park to talk to students on Wednesday, one of the school visitations by elite athletes for which the Freihofer’s has become known. I’m so excited,’’ Nukuri said. “It was sad that I couldn’t do it the last two years. I’m definitely excited because it’s one of the first races I ran after college at Iowa and I have really good memories of coming and talking to kids and stuff. I’m definitely looking forward to racing and it’s different when you don’t have an international field. I’m just glad I’m part of it.”  The winner gets $10,000.  She came in seventh in her most recent appearance three years ago. This race is short by Nukuri’s standards. She said her best distance is the half-marathon. (06/01/2018) Views: 1,392 ⚡AMP