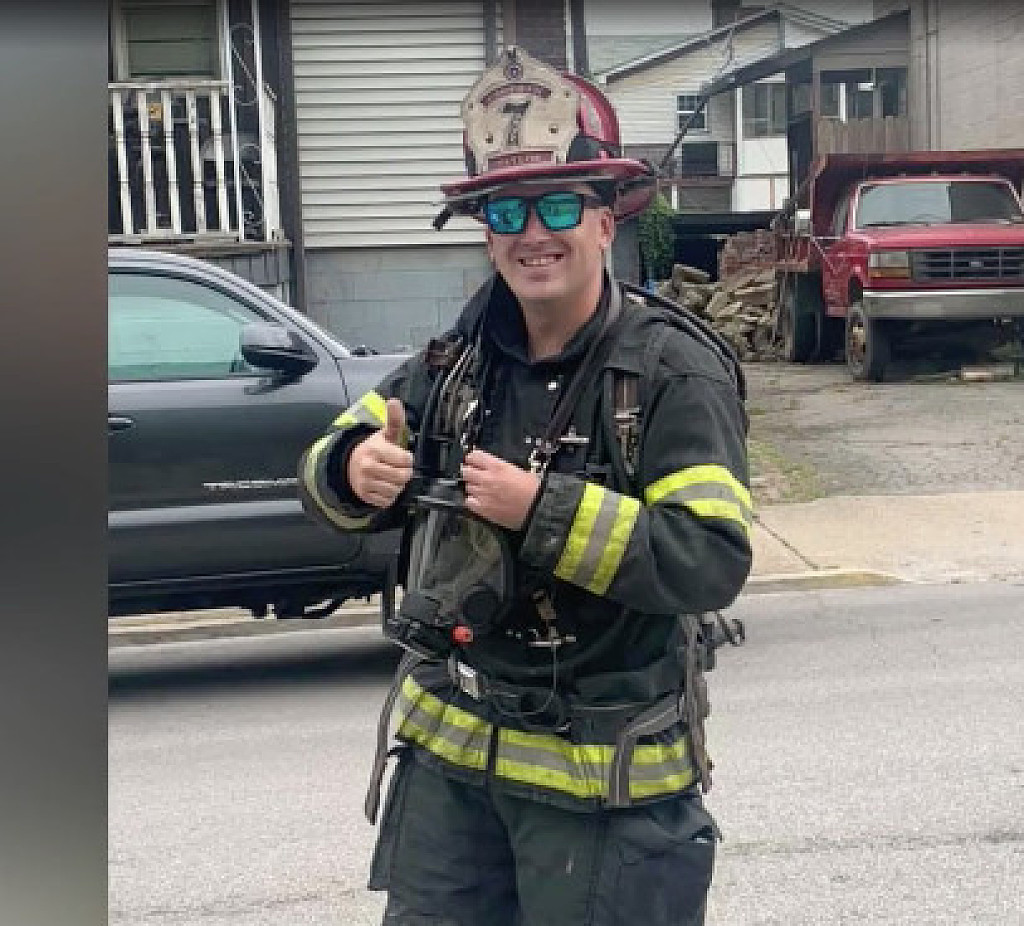 One fully-geared up firefighter is running 8 miles for a cause that could be life-changing to kids with cancer.

It would have been the 23rd annual Debbie Green Memorial 5k/Walk for Leukemia. But this year one man is running… all by himself. 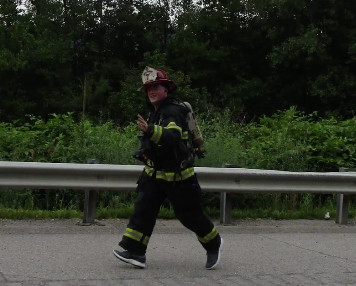 Garson Taylor is the Captain of the Benwood Fire Department. He would have ran the 5k for the 6th time if it didn’t get canceled due to the epidemic.

Still Taylor managed to raise $3,200 from his own run. He ran Saturday morning from the center of Benwood towards Marshall Street until he got to Moundsville… all for the kids.

“At first I just did it just to do it, and then I got to meet the families of these kids that are sick, and seeing their smiles. They don’t even know me. I don’t know them, so it’s a really great thing.”

The Debbie Green Memorial 5k/Walk for Leukemia started 23 years ago.

It all dates back to 1972… the year 6-year-old Debbie Green died from Leukemia. Over 40 kids with cancer have been helped since.

If you’d like to donate to the cause, you could stop by Happy Tails Pet Salon. 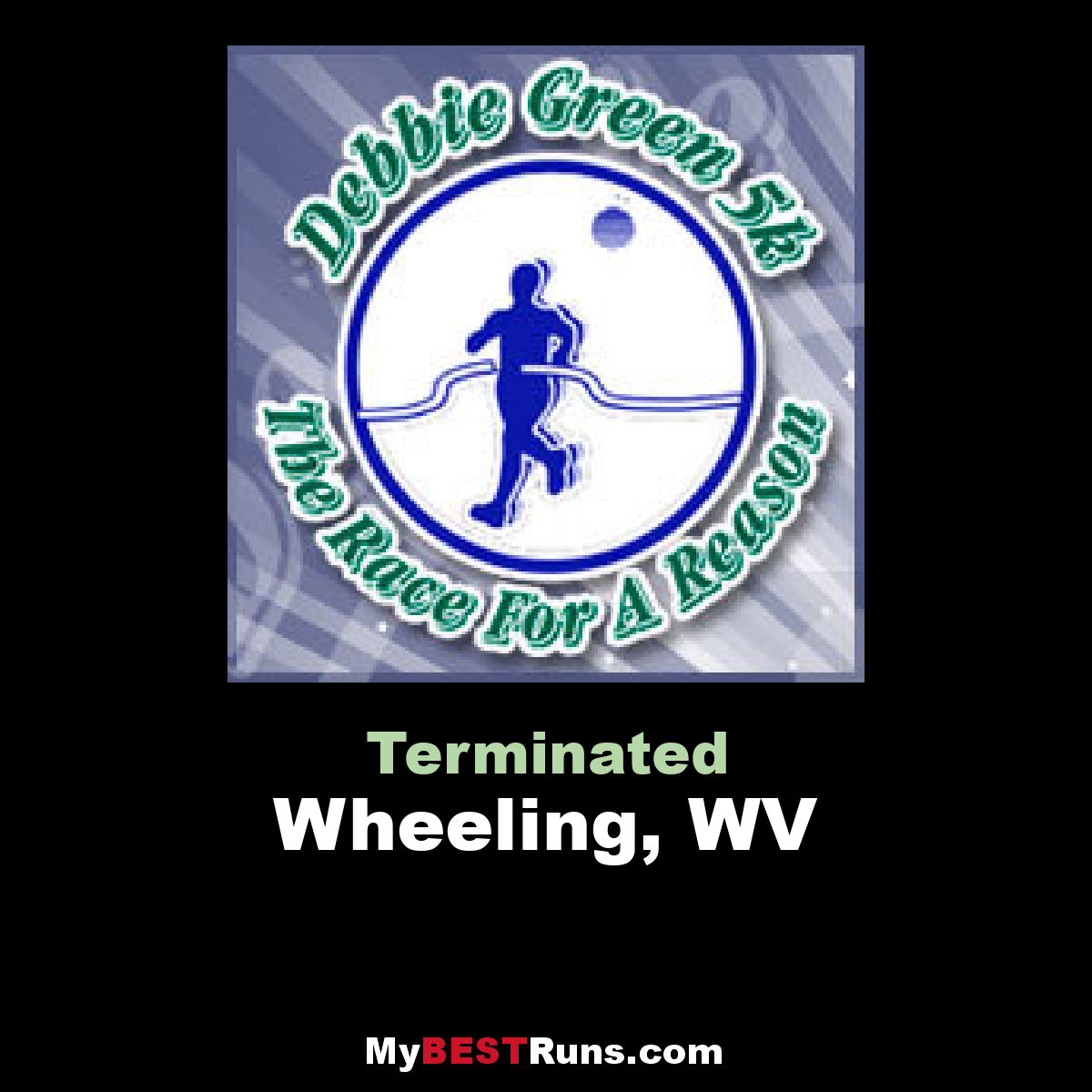 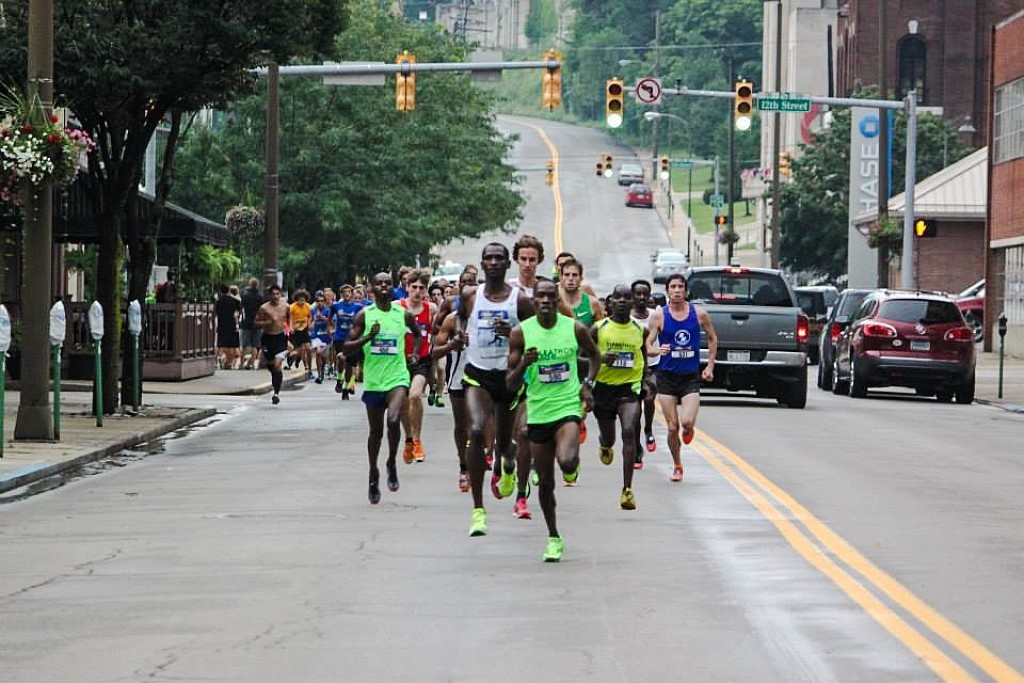 Earlier this week, Ron Green stated that this year’s field in the 22nd annual Debbie Green 5K Run/Walk for Leukemia could be the best Wheeling has seen.

And it sure was a race for the history books. In the end, three runners broke the 14-minute barrier while nine of which ran faster than 15 minutes. The female competition was just as impressive as two were able to clock in under 16 minutes.

After winning the race last year, Vicoty Chepngeno was back for another victory. And she was able to defend her title as she crossed the finish line 15:38, breaking her mark from last year by one second.

“I ran my best time (Saturday) and I’m very happy for that,” Chepngeno said.

Pamela Cherotich was the second female to cross the finish line in a time of 15:57. 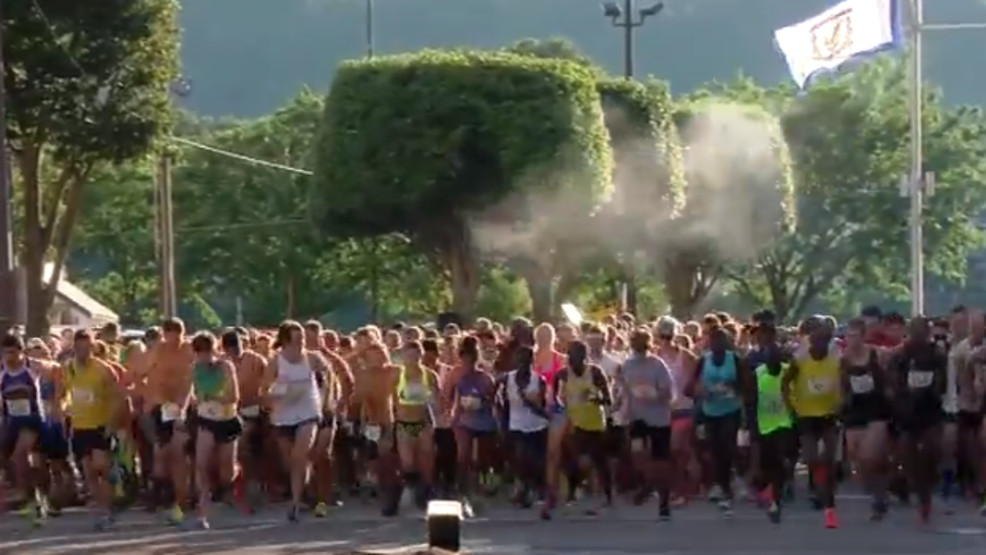 At the mile mark, it looked like it could be anybody’s race. Eight runners were in the lead pack and clocked in under 4:30, with Magut in the middle of it.

Edwin Kibichiy came in second overall as he finished in 13:52 while James Ngandu crossed the finish line in an impressive 13:57.

“They were out and setting the pace,” Green said about the lead pack. “There were about eight or nine with three or four behind them. Then they got to Mile 2 in about 8:30, 8:35, which they were speeding it up a little bit. So the second mile was about 4:15 or 4:10. Once they got on their way back to Main Street, right around the (Imperial) Teacher’s Store, that’s where (Magut) made his break and you could see him separating right there and everybody knew it. The other guys couldn’t catch him. He got a good 100 yard lead at that point and that’s what he won by, about 10 seconds. He had a pretty good lead and that’s when he took it.” 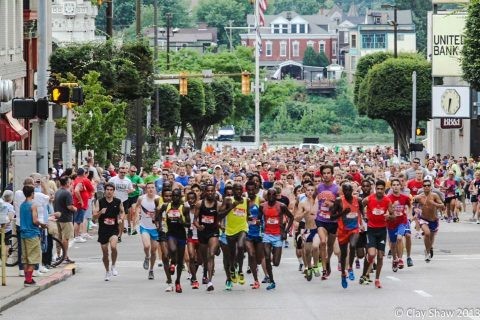 “What a great turnout. What a fast turnout,” Green said. “What a great field with elite athletes from top to bottom. There’s so many great athletes in this race. All the locals, they do great and all the age group awards are going to be talented runners and walkers from all over the Valley. You can’t ask for anything better. The conditions and weather were beautiful. It’s a beautiful race to put on down here on the waterfront. I’m just ecstatic with everything.” 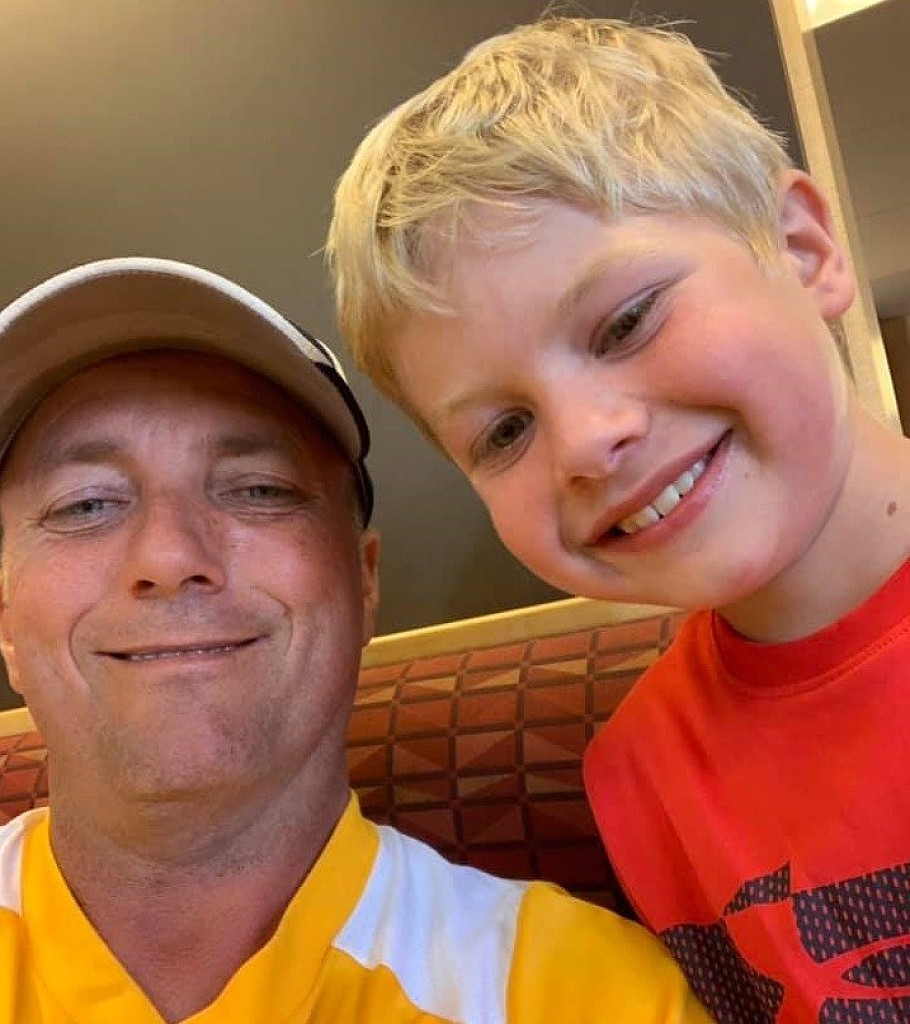 As director of the Debbie Green Memorial 5K Run/Walk for Leukemia, Green has been touch with runners and walkers near and far as race days — Aug. 2 and 3 — approaches.

But while the event, in its 22nd year, continues to have a more national and international flavor, the fact isn’t lost on the Benwood native that the race is a local one benefiting local people.

“It’s nice to have runners from all around the world,” he said, “but, ultimately, I want to treat them all the same.

“Whether you’re from Kenya and are one of the top runners in the world or you’re from down the street from where I live, I want to treat everyone the same.”

Registrations will be accepted through race day for events that begin on Friday night with the Green Mile Run/Walk at 7 p.m. Saturday features the Debbie’s Dash Kids’ race at 6 p.m., followed by the main event at 7.

“We’re pretty excited,” Green said about the events, sponsored by Kalkreuth. “We have a pretty fast field coming in, and some of the past winners are coming in.” 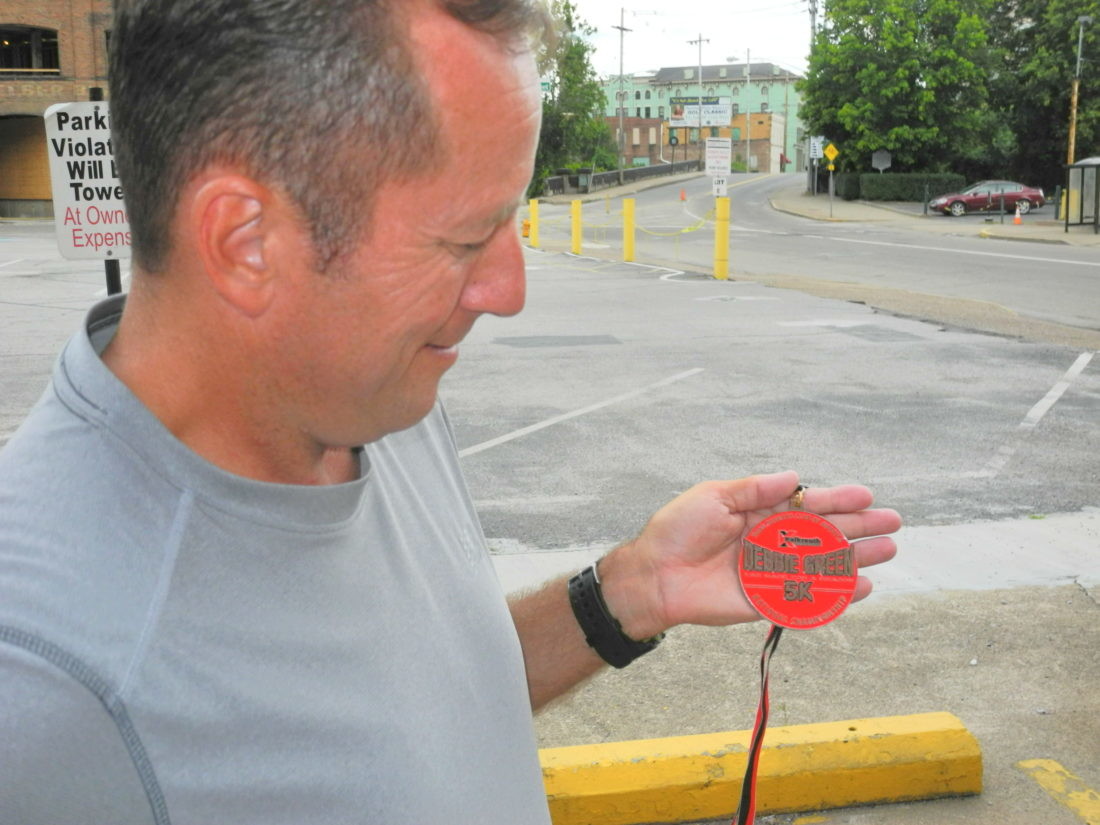 That list includes Mourad Mafout, the 2013 winner. Green is also excited about the arrival of Lawrence Kipkoech, an all-American runner from Campbell.

“It’s been amazing,” he said. “I’ve been getting calls from all over the place.”

American Garrett Kenyon is another runner Green is eager to see run the downtown Wheeling course, along with female standout Esther Wanjiru.

“And you just never know who’ll come in at the last minute,” he said.

“The Race for a Reason” began to honor Green’s sister, Debbie, who lost her battle against leukemia at age 7 in 1972.

“We started this race to help local kids with cancer,” Green stressed, noting two youths from Belmont County will be aided this year. “Having these people from throughout the world come here and having your sister’s name out there everywhere is amazing.

“When I started this, I never thought we’d have runners from Kenya or Ethiopia or Mexico. We’ve had women that went 1-2 in the Olympics.”

Green has also had a wide-range of local runners cross his finish line. Now, a second generation of runners are making the trek through the course, which is now in Wheeling after starting in Benwood. 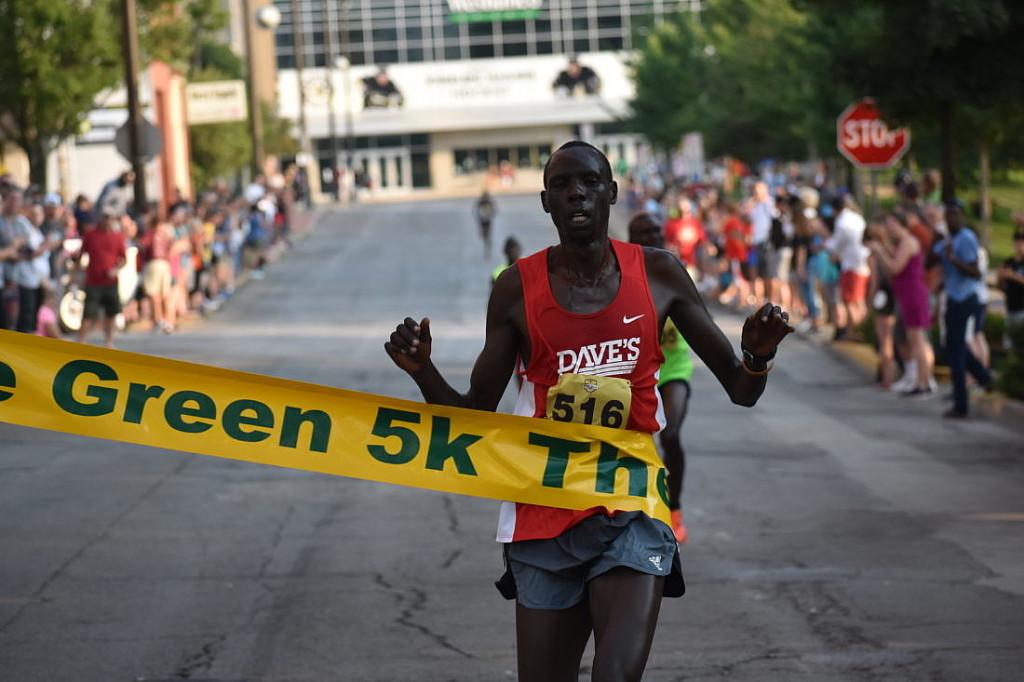 Kiprop Mutai wins the 21st Annual Debbie Green 5K in a blistering time of 14:12 on a hot and humid day

Kiprop Mutai, secured the overall victory as he crossed the finish line in a blistering time of 14:12, while Vicoty Chepngeno was the overall female runner as she broke the tape as the clock read 15:39. Mutai, was in a small pack the whole race, but was able to keep out in front and get the overall victory by 2 seconds. “This area is very good. It’s very hot, but I like it. It was really hilly, it’s not easy. But maybe next time, I’ll do better than (Saturday),” Mutai said. “This is my first time to be here. Maybe next year, I’ll come back.” Four runners ran the 3.1-mile course in less than 15 minutes. Cyrus Korir came in second place with a time of 14:14 while Simion Chirchir, who won the Debbie Green 5K the last two years, clocked in at 14:17. Daniel Kemoi secured fourth place in a time of 14:29. Rounding out the top 5 men was Kipkoech Kirui (15:13). Martins Ferry’s Cedric Robinson was the top local male finisher as he finished 10th (16:36). Just like Mutai, Chepngeno stated that the course was a challenge with all the hills. “This race was not easy. It was very humid. This race was had a lot of hills,” Chepngeno said. “I tried my best. I ran a 15:54 at another race, so this is my best time.” Delvine Meringor was the second female to cross the finish line with a time of 15:41 followed by Susan Jerotich (16:18). Jerotich won the annual 5K event the past three years. Rounding out the top five females were Iveen Chepkemoi (16:39) and Margaret Wamahiga (17:15). (08/06/2018) Views: 1,297 ⚡AMP