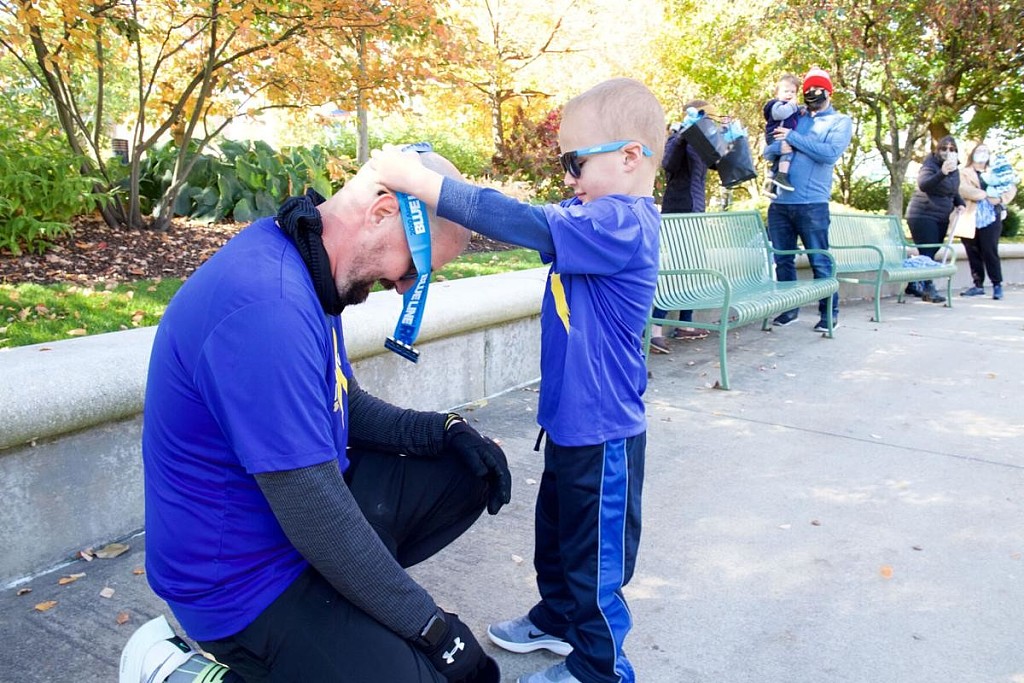 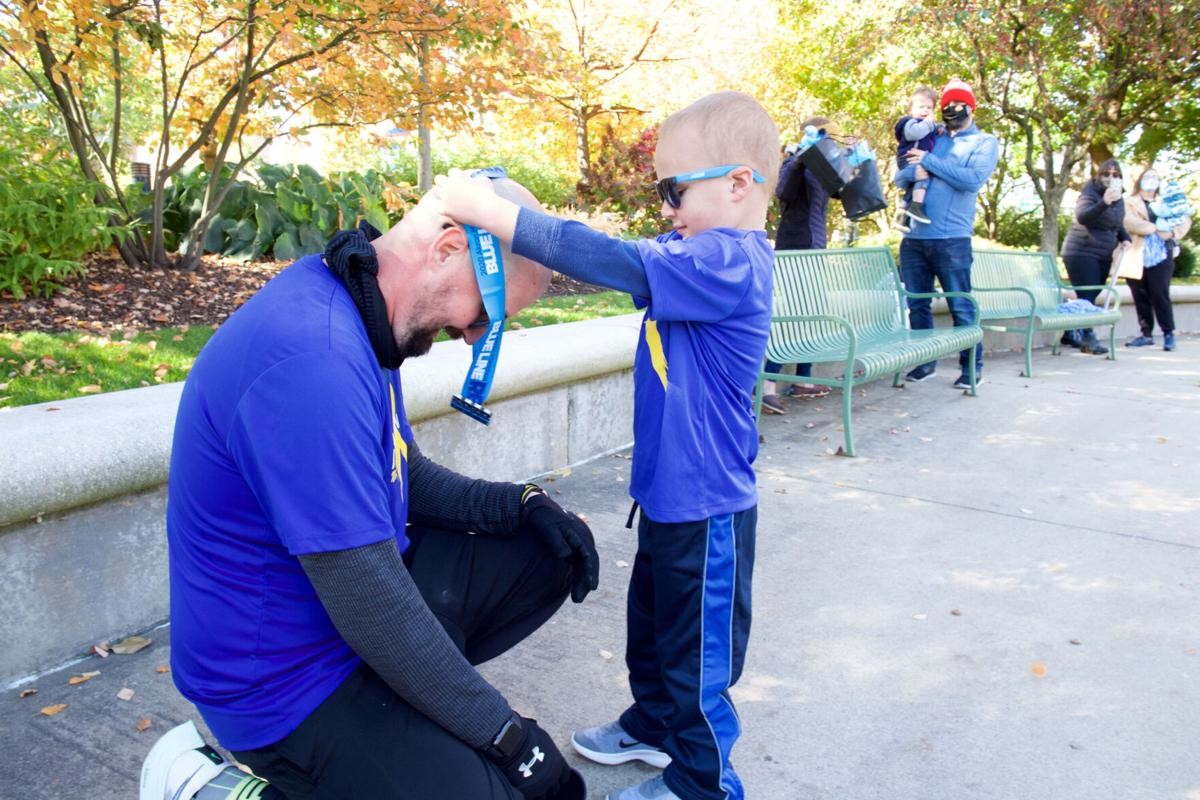 There were two thoughts pushing Kolt Codner forward in his first marathon race: his 4-year-old son Andrew's fight against cancer and the hospital that provides him care.

Codner, of Poland, Ohio, ran 26.2 miles around Akron Children's Hospital on October 17 to raise money for the hospital treating his son, who has 26 months left in his treatment. 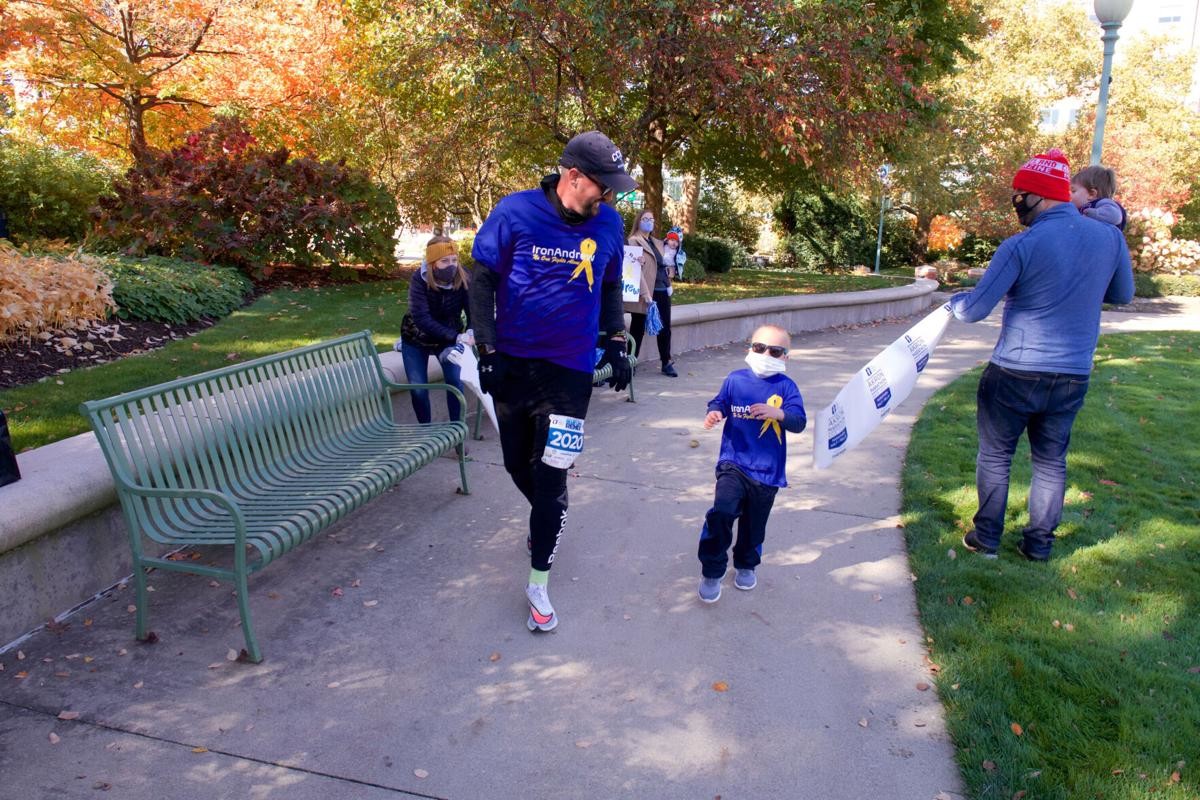 In early May, Codner and his wife Tristan received a phone call that Andrew had a bed waiting for him in the hematology and oncology unit of the hospital.

A day that began as a visit to the pediatrician for Andrew's swollen face had resulted in a diagnosis of acute lymphoblastic leukemia, a common childhood cancer. 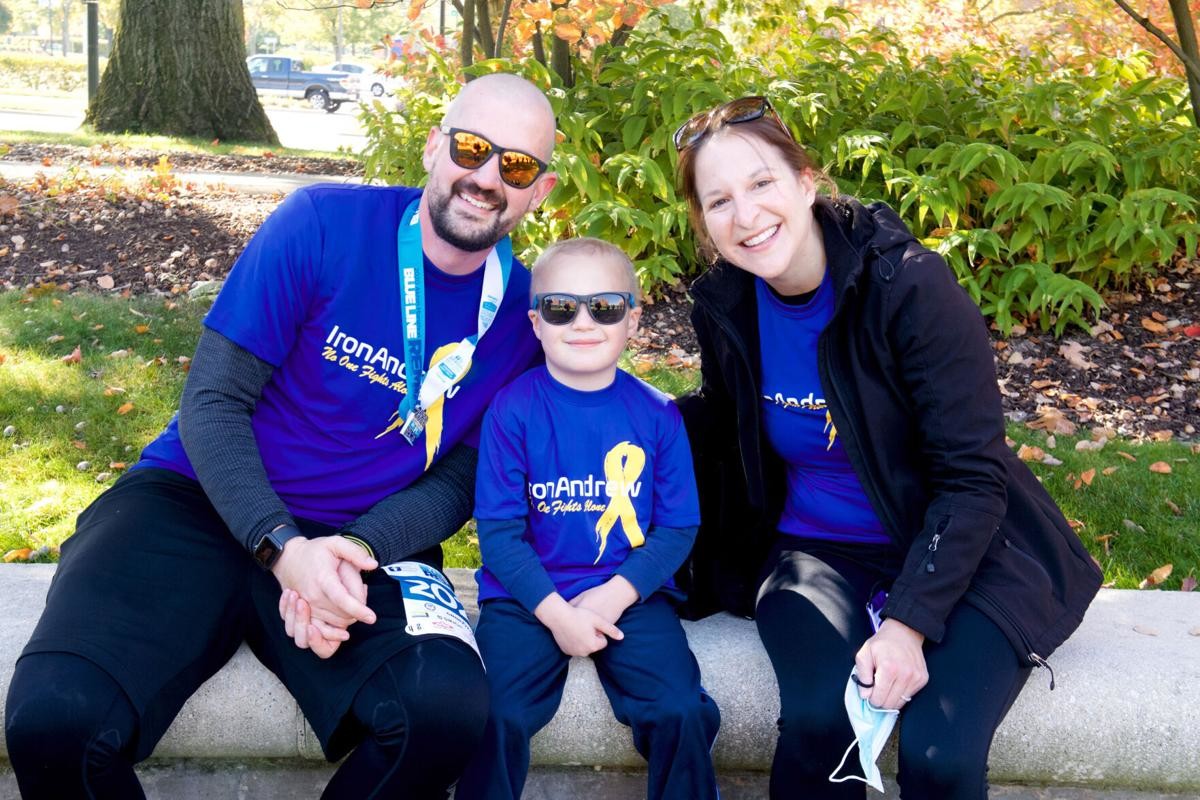 Codner's run served to show his appreciation to the hospital staff that has turned a traumatic experience like cancer treatment into one his young son faces bravely, Codner says.

"The folks at Akron Children's have taken something that should be scary and terrifying and made it this amazing badge of honor to recognize the superhero that he is," Codner told CNN. "We couldn't think of a better thing to contribute to and spend time trying to help raise funds to ensure that all kids have access to the same amazing experience as Andrew has had at Akron Children's."

Codner participated in the race as part of the virtual FirstEnergy Akron Marathon, Half Marathon & Team Relay, which replaced the hospital's yearly marathon due to the coronavirus pandemic. According to the virtual marathon guidelines, runners can race at any location or pace, and Codner decided to run his marathon around the hospital to spotlight their work.

On the day of the race, Codner wrote Andrew's name on the top of his running shoes to keep him motivated. Friends and family were stationed outside the hospital to cheer him on, in a course that took 5 hours and 35 laps to complete. His son was even able to run with him across the finish line and award him a medal.

"To see him running and doing that last lap with me was just incredible," Codner said.

By the end of the run, Codner had raised 10 times more than his initial goal of $1,000, according to a hospital press release. The fund has reached over $13,000 in donations and has expanded its window until November 30.

Dr. Megan Sampson, a pediatric oncologist who has treated Andrew at the hospital, praises the Codner family.

"It just amazed me that during this scary time that he was thinking about doing this," said Sampson, referring to Codner's run and the attention he has drawn to the hospital's work.

Andrew's prognosis is good and he's responding well to the treatment he has received, but he still has a long way to go, Sampson says. 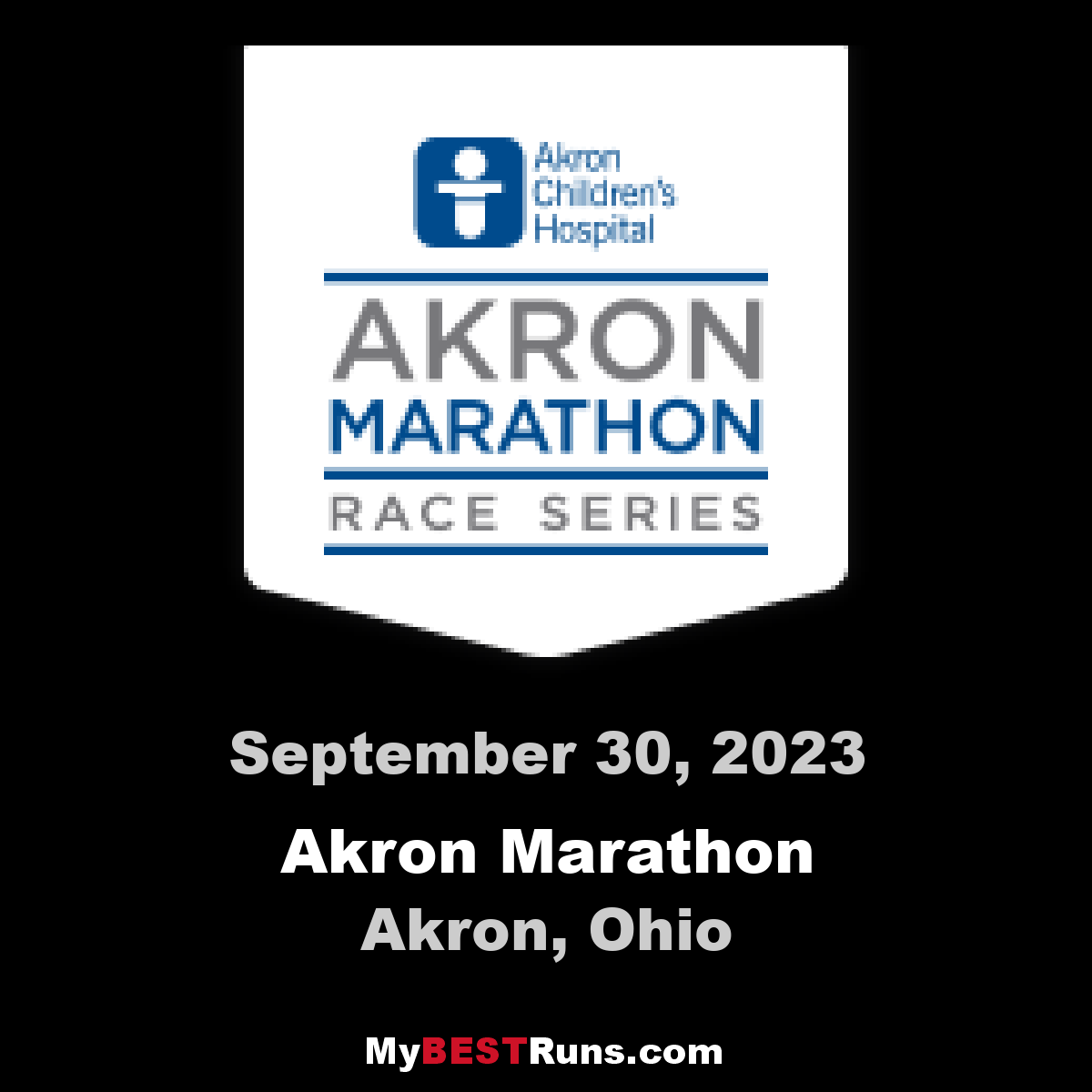 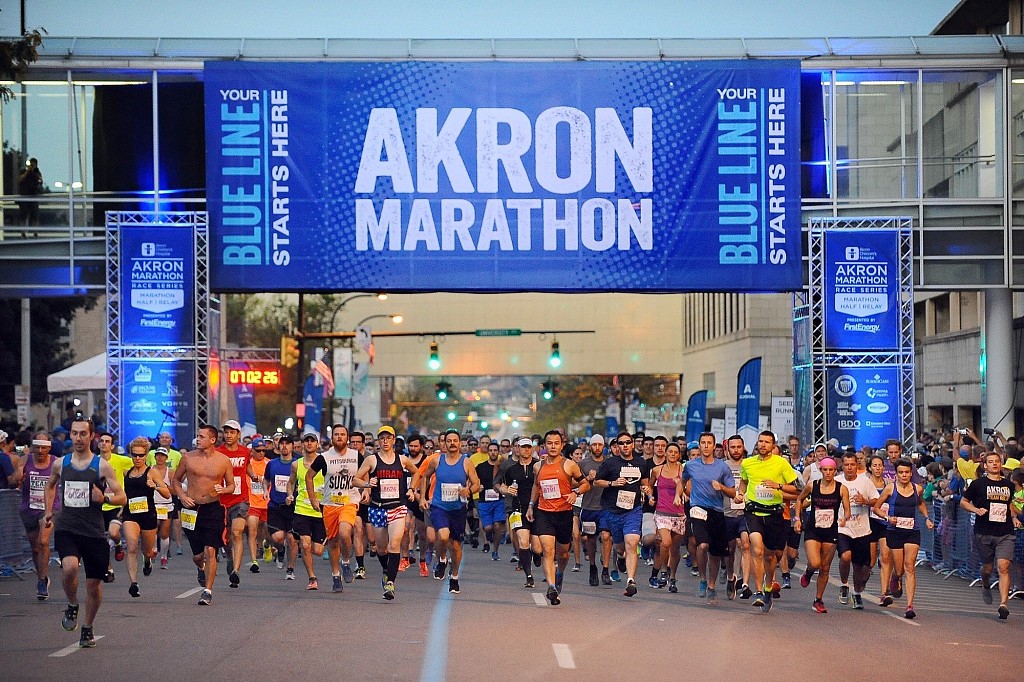 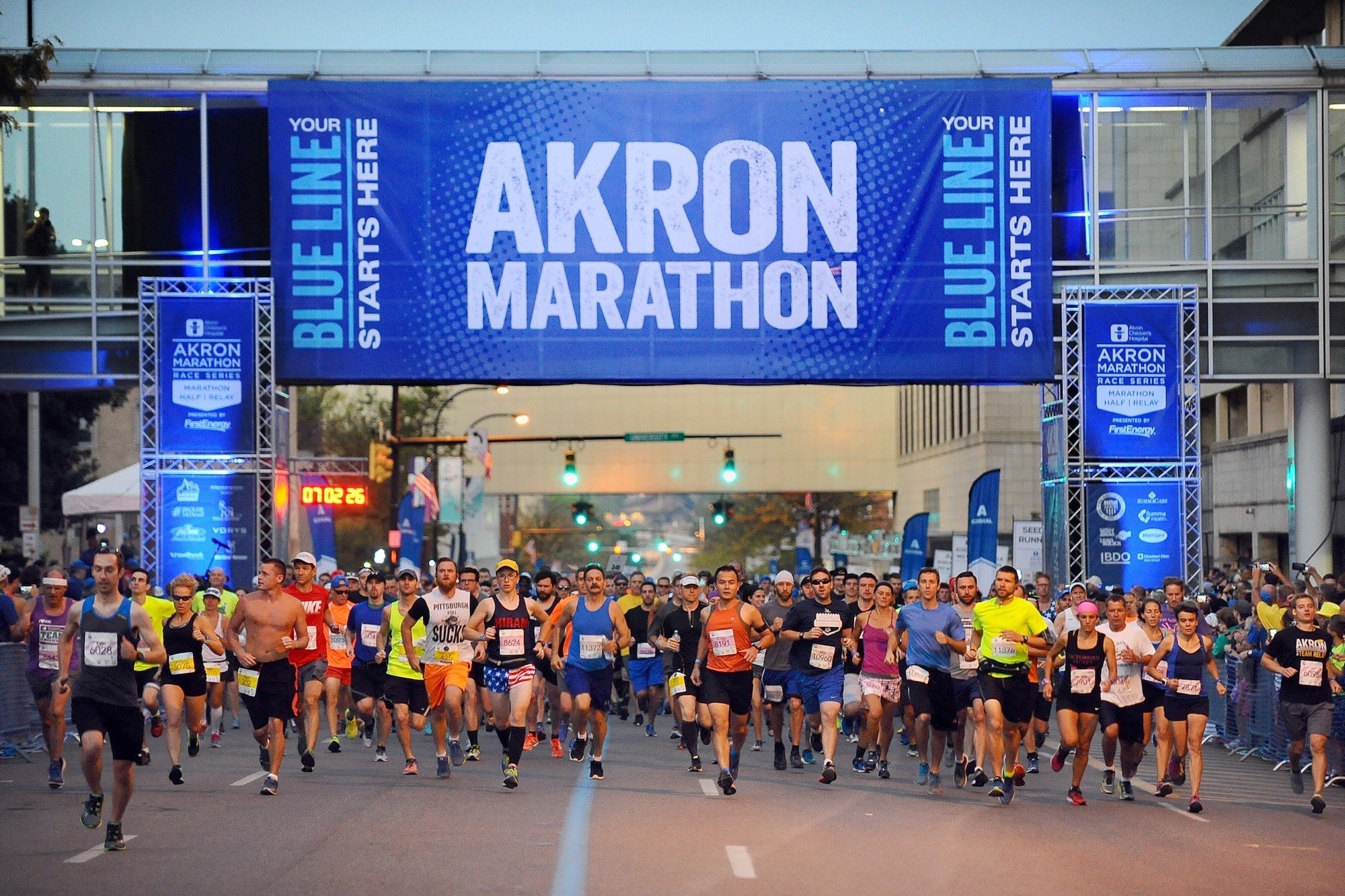 For the first time ever, Akron Marathon will be offering virtual race this year

For the first time ever, the FirstEnergy Akron Marathon will take place as a “virtual race experience” this year, said Anne Bitong, president and CEO of the Akron Marathon Charitable Corp.

“We certainly wish we could have hosted a physical race, but in the information-gathering process, we asked ourselves if we could host the same type of world-class event and we knew that we couldn’t,” she said. “We knew that given the environment and given safety issues and concerns, the experience would have to be completely different. And we are in the business of offering a great experience. … So, we are doing our best in terms of trying to make it unique and putting the Akron Marathon spin on what that virtual experience might look like.”

According to Bitong, the FirstEnergy Akron Marathon, the Half Marathon, the Team Relay and related events, including the Health & Fitness Expo and the Kids Fun Run, scheduled for Sept. 25-26 will take place virtually due to the COVID-19 pandemic. The marathon is part of the Akron Children’s Hospital Akron Marathon Race Series, which includes two other summer races that were canceled this year. 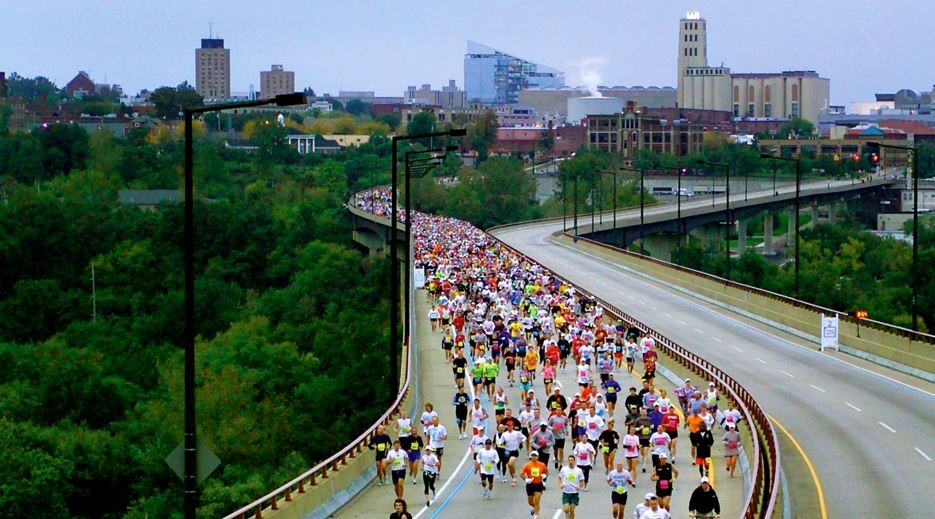 “This is our 18th year of putting on our races and our first year of putting on a virtual race,” she said. “In our case, a virtual race is a race that you can run, at your pace, from home or any location. Runners — whether for the marathon, the half marathon or relay — will run their distance and then upload their race results through their favorite app or tracking device to our registration platform. And then we will deliver a personal results page and a finisher’s certificate for their participation in our event. [Participants] can run their virtual race beginning on Sept. 26, which was the original date, through Oct. 31.”

Since making the decision, Bitong said the Akron Marathon Charitable Corp., which organizes the race series, has been “overwhelmed with positive feedback from our running community.” 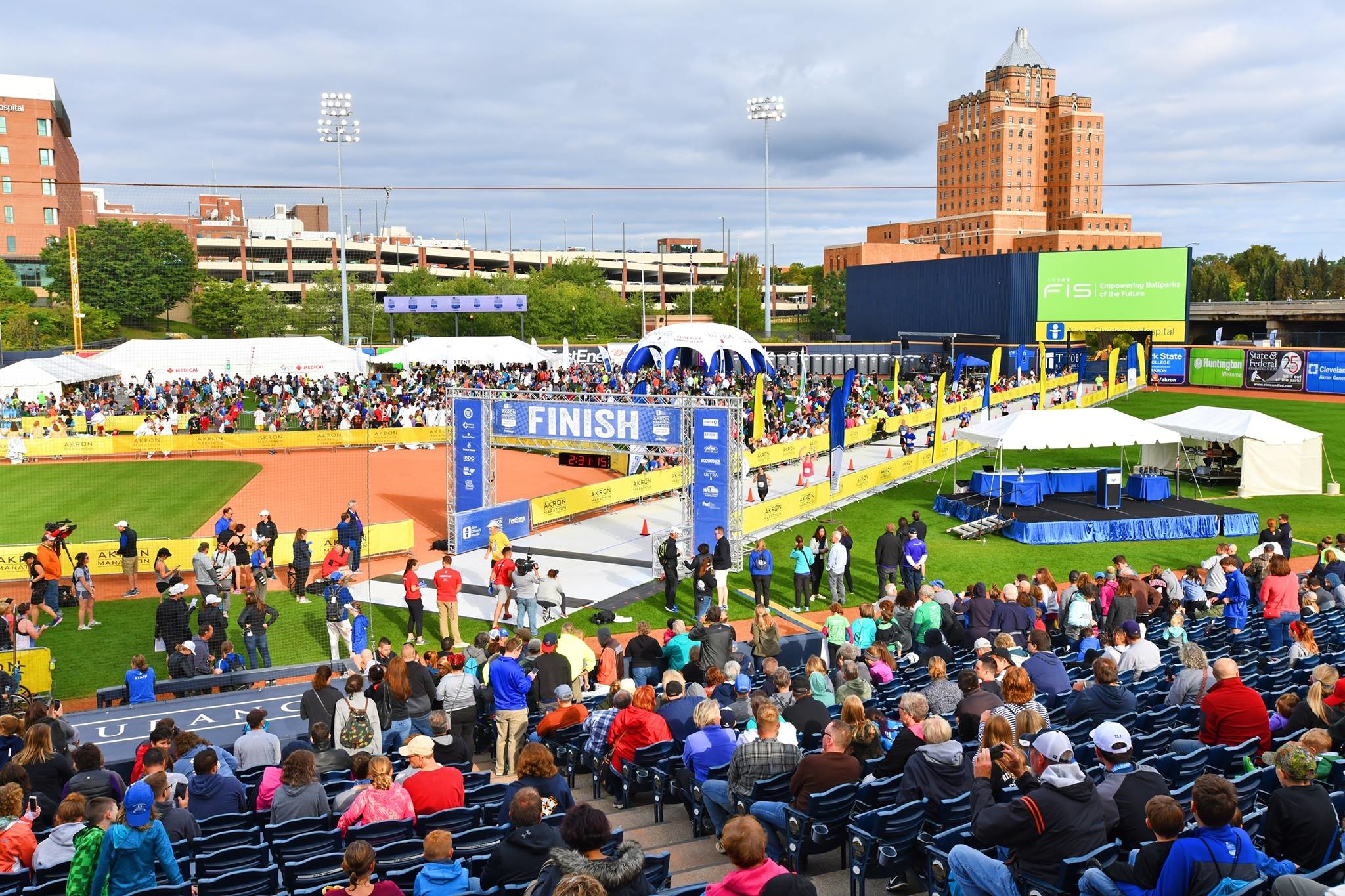 “We’re just thrilled that people understand the position that we’re in, and we’re happy that we can support them,” she said. “We have about 2,000 people who are registered. We were expecting 10,000 under normal circumstances, but we have people who are still trying to decide between doing the virtual race or deferring their entry until next year.”

According to marathon officials, runners who have already registered will have the option to keep their registrations and participate virtually, donate their registration fees or defer their entry to a future race.

One unique aspect of this year’s virtual Akron Marathon is what Bitong called the “blue line in a box.”

“That’s the race kit that we’re going to be sending out to all of our virtual race participants in advance of the race,” she said. “That way, the shirts and medals and those types of things they would typically get race weekend will be prepared and they will have everything they would need to support them on their virtual race. Our concept of the ‘blue line box’ is that it has a subscription box feel.”

The box’s contents will vary for each of the events, Bitong said.“For example, with the marathon, you’re going to get your race bib, special offers from our partners, an ASICS short-sleeve tech shirt, ASICS custom Run Akron socks and custom Goodr sunglasses, which are really popular with runners,” she stated. “And then you’ll get your course support nutrition that you typically would get on the race day, as well as your finisher medal. For the half marathon, they would get similar items, but not the Goodr glasses. And the relay runners would get the bib, the shirt and the finisher’s medal.”

Bitong said the items will make note of the uniqueness of this year’s virtual event. “We kind of went to the drawing board in terms of the runner premiums this year,” she said. “For many of the items, such as the shirts, we had the blanks on order, but the design is going to be unique and commemorate this year as a virtual race experience.”

Another big change for this year’s event, Bitong noted, is an earlier registration deadline than normal. “Typically, registration for our event is open through September. We usually close it the week before the race,” she said. “This year, we’re only keeping registration open through June 30. That way, we have a great idea of how many people are planning to take advantage of the virtual experience. And from our perspective, we have to prepare all of the blue line box kits and get all of them stuffed and out in advance. There’s a lot of detail behind getting those ready to go and make sure they hit homes prior to race day.” 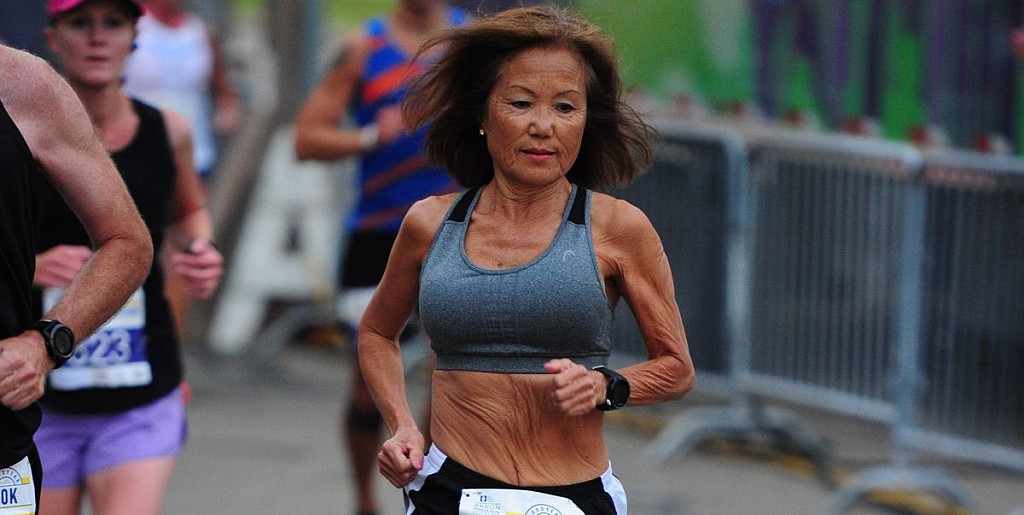 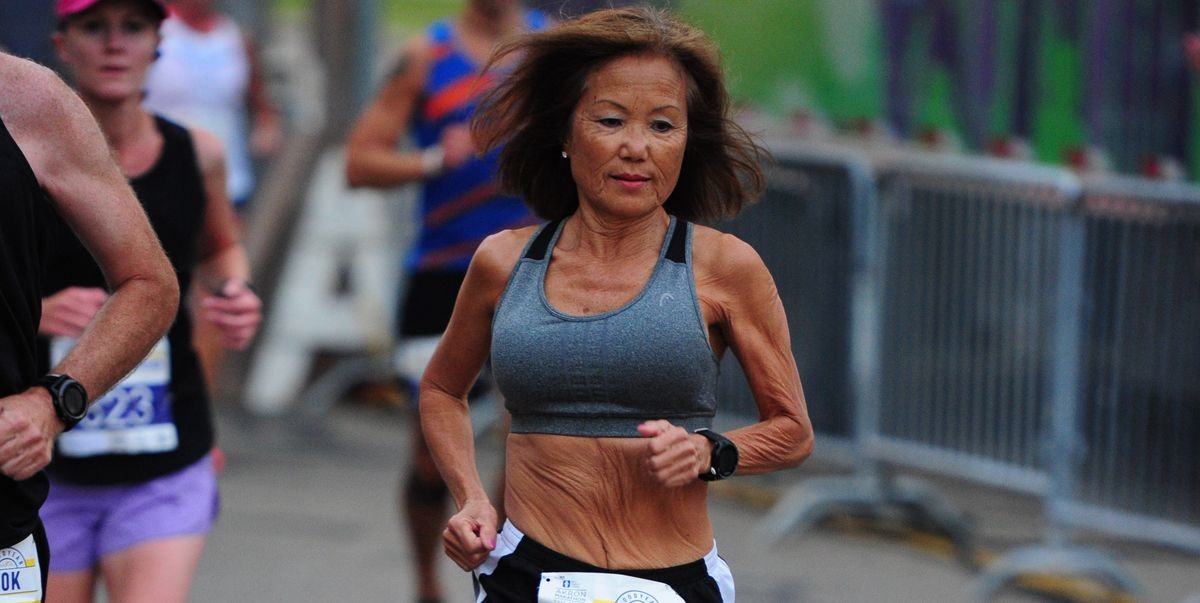 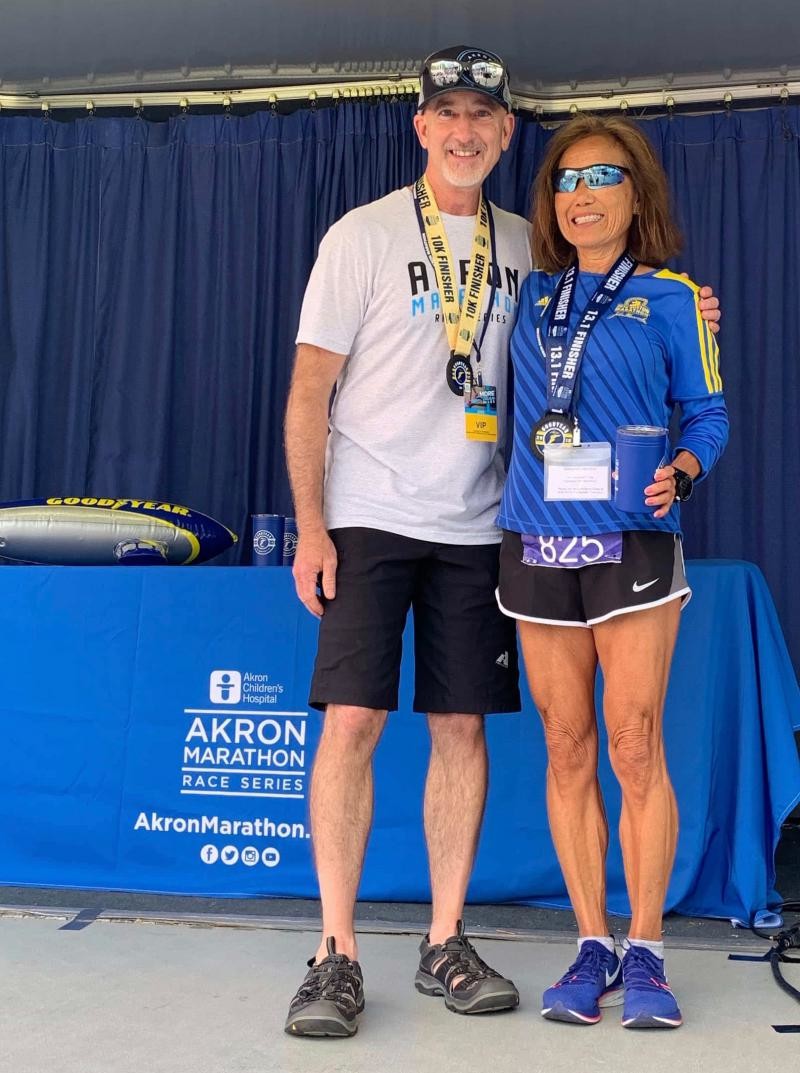 The Goodyear Half Marathon and 10K began at the normally closed-to-the-public Goodyear test track Saturday morning. When the course ended at Goodyear's Global Headquarters, 71-year old Jeannie Rice of Mentor unofficiallly broke the world record for her age group with a half-marathon time of 1:37:07.

"And I see the times and I know I had it. I finish and I told a couple ladies who were there, ‘I did it! I made a world record!’ It was a great feeling." 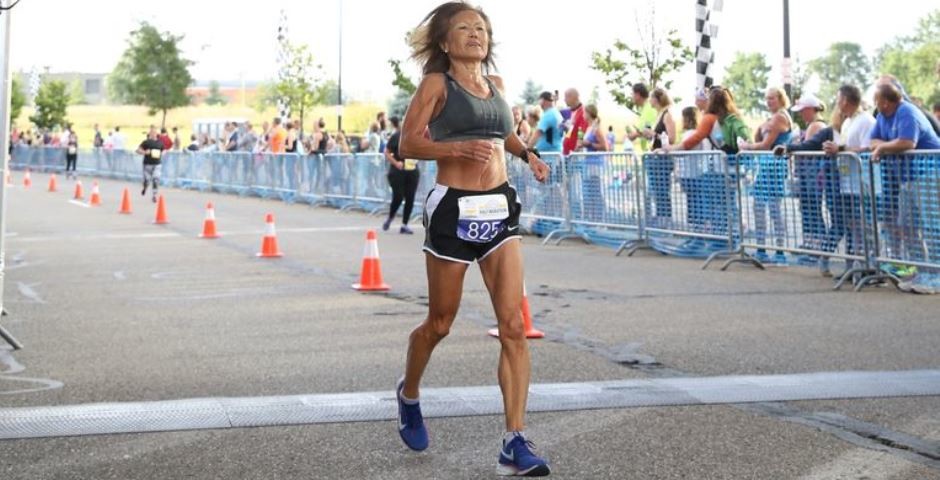 Rice said she's been running for 35 years and has never been impeded by an injury. She's completed a number of races and will run in the full Akron marathon in September. She typically runs 15 miles a week but has upped that to 60 miles per week to prepare for the marathon.

More than 2,500 athletes, both runners and walkers, participated in the event, which was sold out. Dylan Garritano from Akron and Emma McCarron from Mansfield were the respective winners in the men’s and women’s races, finishing at 1:10:20 and 1:23:12. The 10k titles were taken by Nathaniel Hunter Moore from Uniontown and Lydia Hochstein from Cleveland finishing in 33:14 and 39:13.

The Goodyear Half Marathon & 10k welcomed runners from 25 states, with ages 11 to 80 competing.