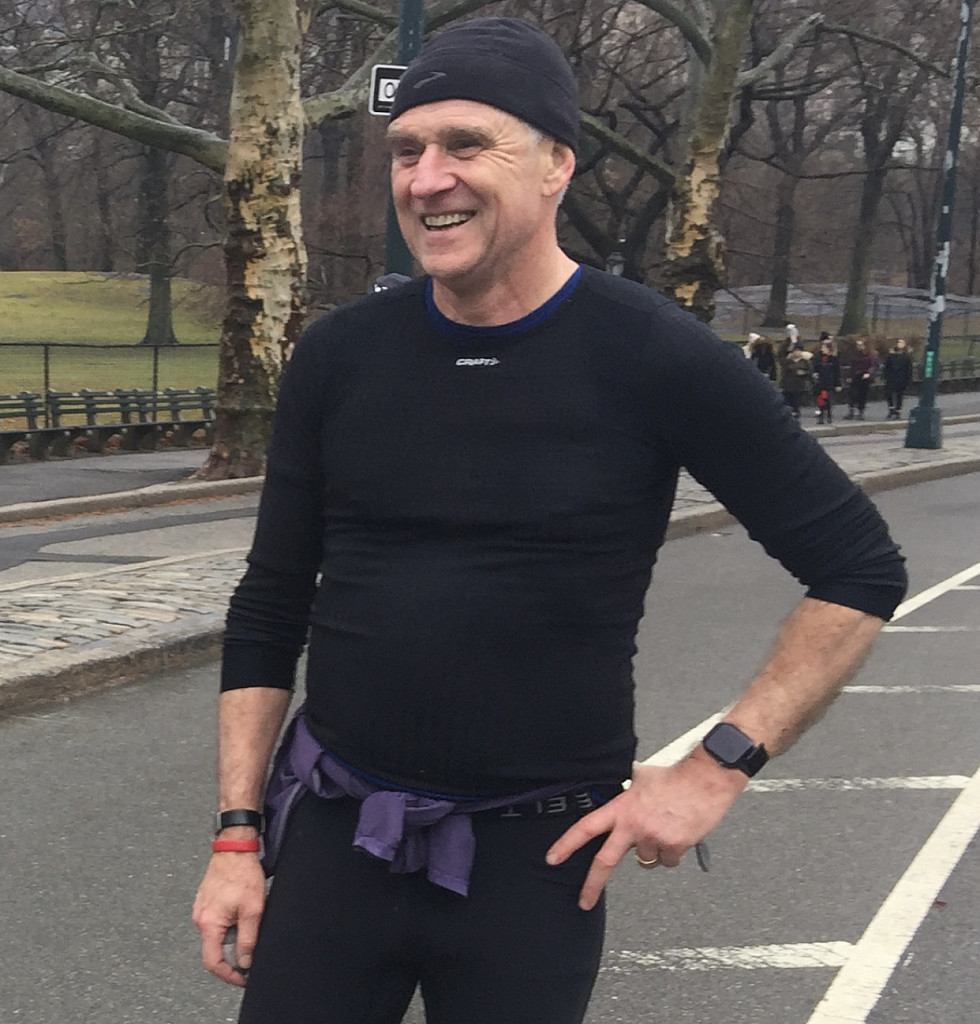 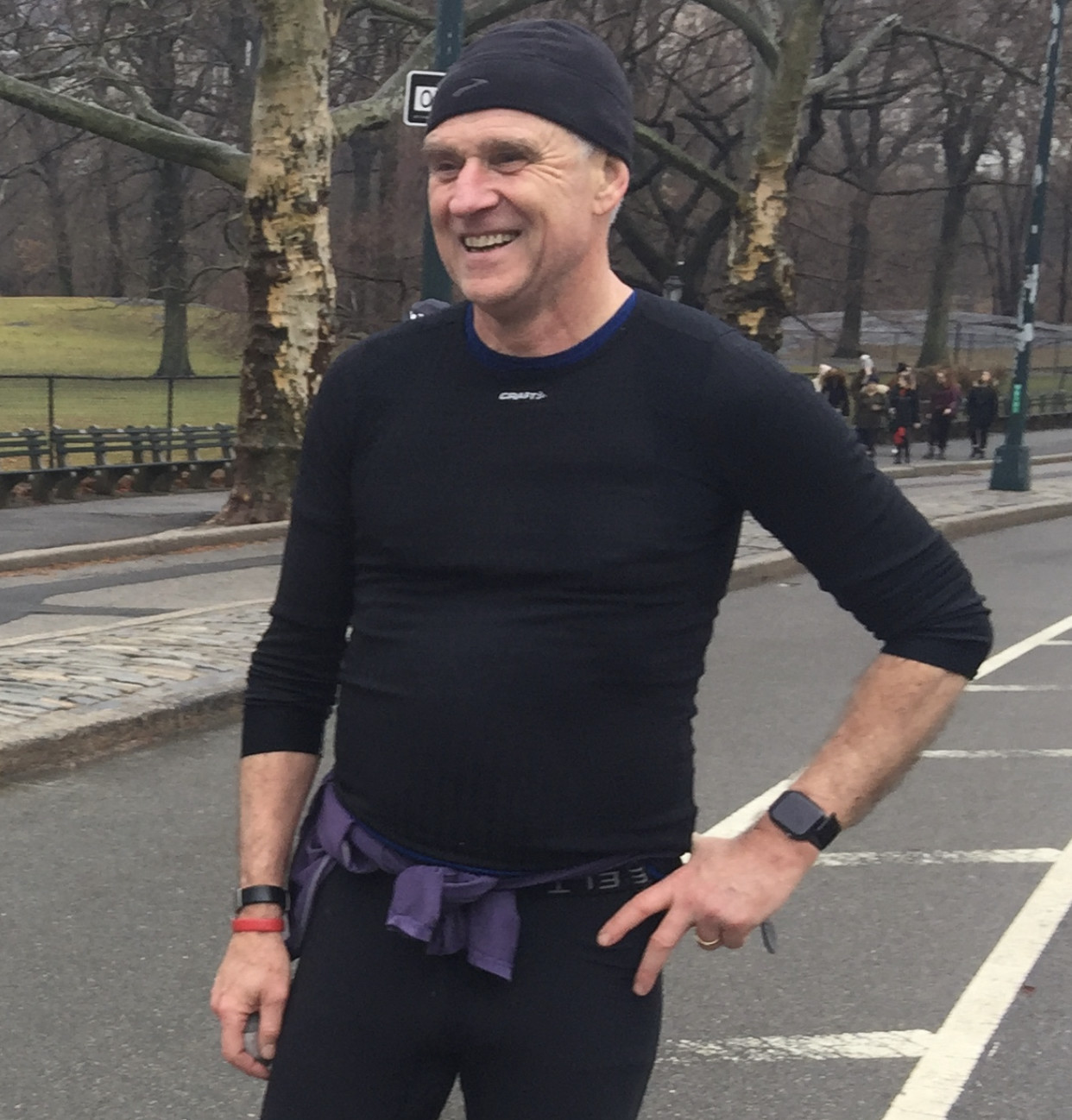 A little past 7 on Christmas Eve morning, about 15 minutes before sunrise, I headed out for my Tuesday morning four mile run through Central Park. I’ve done the same thing, at the same time on 19 Tuesdays since late spring. It wasn’t easy this time.

Lately it has gotten a lot harder. The hills in the park seem to have gotten a fair bit bigger. In spite of having run six days a week since Memorial Day my fitness hasn’t improved in a typical way.

I start my run at home and finish near a diner at Columbus Circle. Kristen leaves the apartment a little after I do and takes a duffel of dry clothes on the subway to meet me. We’ve gotten the timing down so we arrive at about the same time. 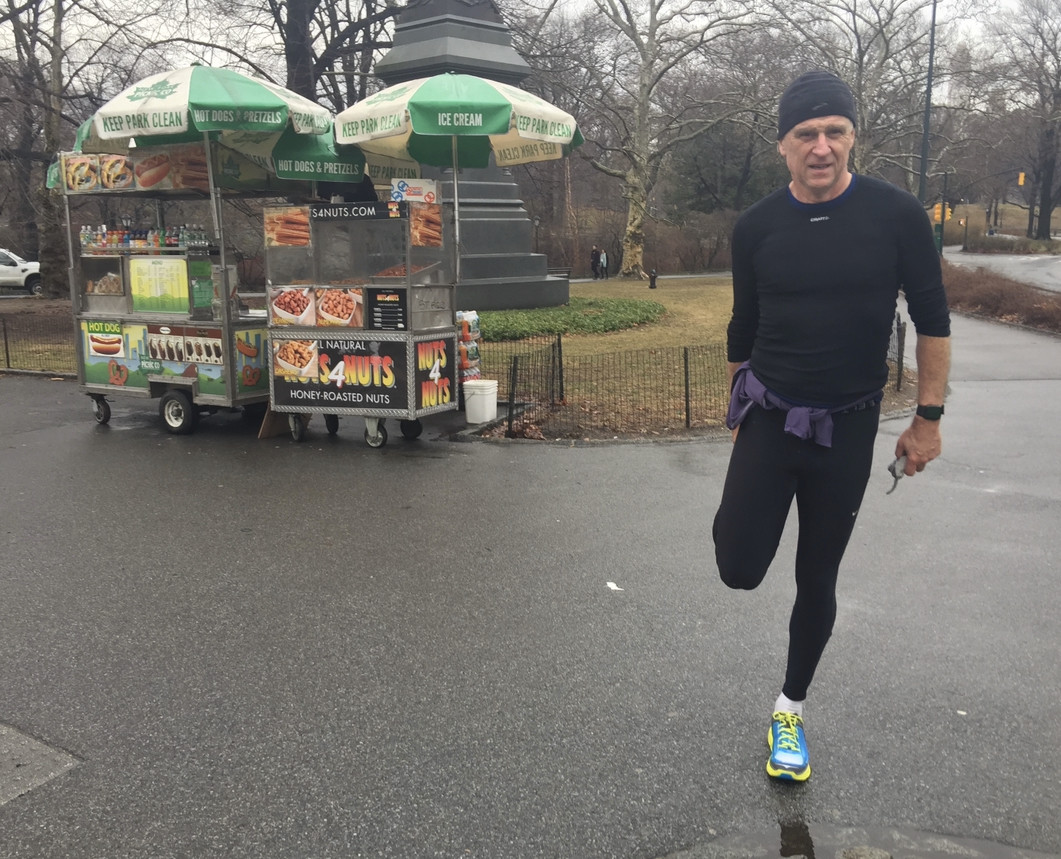 I towel off and change clothes in the restroom of the diner. A quick coffee and a bagel and off to Mt Sinai for my weekly chemo treatment.I haven’t really kept it a secret that I was diagnosed with colon cancer in March. A fair number of friends know.

I have made a point of not talking about it much; choosing not to allow myself to become a victim of the diagnosis or to have “C” as a new middle initial or for any of it to become an unintended and unwanted new identity so....a lot of folks might not know.

I seek no pity, no attention nor to raise money to cure anything. You should know I share all of this only in an attempt to get it out of my head and move on.

At the same time, if this encourages anyone to stay active in spite of a health condition or more importantly to listen to your body and when something feels off, see a Dr, get a colonoscopy as I did, good.

Tuesday wasn’t meant to be my last run to a chemo appointment but it will be. The side effects have gotten increasingly more difficult and unmanageable. My Dr. said that I had already realized the benefits of the treatment and continuing would be more harmful than helpful.

He gave me the best Christmas gift ever by agreeing it’s time to stop. I’ve managed to cover about 800 miles since I recovered enough from surgery to begin running in late May.

My Dr. supported my attempt to try and run through my treatments. He seemed to intuitively know that after 50 years as a runner that it would be good for me both mentally and physically.

I’m not sure he initially thought I could keep it up. In time I think he began to think I might. I never doubted It. The nurses in the infusion suites were endlessly supportive and maybe even amused (or maybe bemused) by what I was trying to do.

All of my runs each week fell into a nice predictable pattern. Tuesday’s morning run to the hospital was always filled with intent; to be of good cheer about where I was headed and why. I always intended to minimize dread by running to the treatment, to take it head on.

Wednesday was a day off from running because I had no choice. I’d wait until late day to get out on Thursday to give myself as many hours as I could post-chemo. It usually worked. 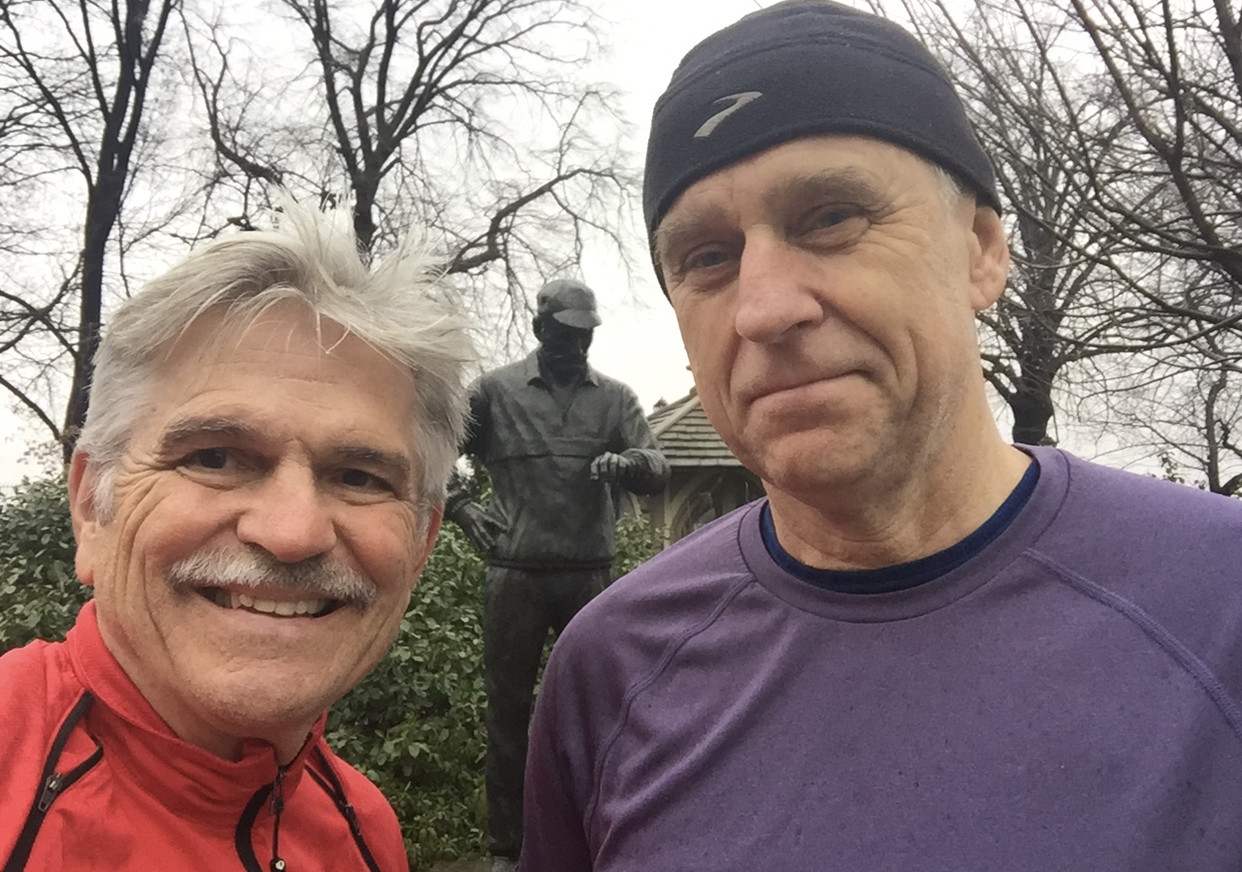 I’d be a little gauzed over from the lingering effects but a gentle run in the woods seemed to wash it away. Friday, Saturday, Sunday & Monday were life as usual, as much as possible, with a daily run of 4-7 miles, mostly in the Connecticut woods.

It was all combined with slowly building anxiety as the days crept toward the next Tuesday. And so it went through the summer heat & humidity, the crisp lovely days of fall and the darkening cold days of early winter.

My Dr. said that the effects of the chemo would be cumulative and therefore more difficult as time went on. It was steadily getting harder over the months but with a certain amount of guile it was manageable, at least until early December.

Over the last few weeks there were new side effects weekly; amplified and lingering. I kept my routine, running every day but one each week.

My Tuesday run through the park had the intent I always meant it to have but coming as my 6th run in a row and over the hills of the park, it began feeling as difficult as the last 4 miles of a marathon.

Christmas week the side effects reached a point where quality of life was being impacted; sleep, eating, GI distress, weight loss and profound fatigue. It was hard to imagine continuing the treatment until early February.

My Christmas Eve morn run to the diner was a real beast. I struggled but made it. Big body chills, afterward a real doubt that I could get through the day without being hospitalized if I had my scheduled treatment.

I couldn’t eat after changing into my dry clothes. I wasn’t able to get warm no matter what I did. I felt crummy to say the least.

As Kristen and I talked about what to do, we both recalled a meeting with my Dr. back in June in which he said in my case chemo was optional but that research said a good outcome was slightly more likely if I did it. It made sense to take advantage of every opportunity presented to us and we quickly agreed to the 6 months of chemo.

I knew, we knew, that I’d reached a point where I needed to ask my Dr. what I could or should do. When I saw him mid morning he told us there was no statistical difference in the effectiveness of my particular treatment lasting 3 months vs. 6 months.

I’d made it 4.5 and he agreed that I had reached a place where stopping made sense. He shared with us that he had seen my decline and nearly recommended stopping a week prior but decided to wait and see if I bounced back.

I clearly hadn’t....and just like that I was done. What’s next? Beyond Christmas morning with my still sleeping family, it’ll be the beginning of a few weeks of getting the residual drugs metabolized out of my body and my blood counts rebuilt to normal levels.

I will have a lot of follow up blood tests and CT scans in the months and years ahead. I’m a really lucky one in that I caught this early, it hadn’t spread into my lymph nodes or anywhere else. The expectation is that I will be ok.

I’ll continue running six days a week. I might even run through the park to the diner on Tuesday mornings. I’m not sure my dear night owl of a partner would be quite so enthusiastic about continuing to leave at 7am with a bag of dry clothes. Maybe I can get her to keep doing it if I try to go at a more civilized hour...

Updated Feb 12 - I have continued running 6 days a week since Christmas. I’m still rebuilding my strength from the damage done to my blood from 4.5 months of chemo.

It’s slow but I’m gaining some strength. I managed my first 30 mile week recently and have gotten pace back down into the 8s per mile and my long run to 8 miles a couple of times.

In March I’ll go in for my first round of post chemo tests and my first colonoscopy (which will be necessary annually from here on). As a runner my body has done a very good job of keeping me informed of where I am and where I’ve been through all of this.

It was intolerance to normal running that led me to be a persistent pest with my Drs and led to the early (and luckily timely) diagnosis, running through the chemo kept me in touch with what was happening to my blood count.

I had blood tests every week prior to treatments and I was often able to tell my Dr what I felt like the blood test would show just from how different or difficult the running had been in the week prior.

Accordingly I’m pretty optimistic about what the tests in March will show, just as a result of how I’ve felt putting in a few more miles and even doing so a little more quickly...

Photos were taken Feb 2019 during a run in Central Park with MBR editor Bob Anderson.