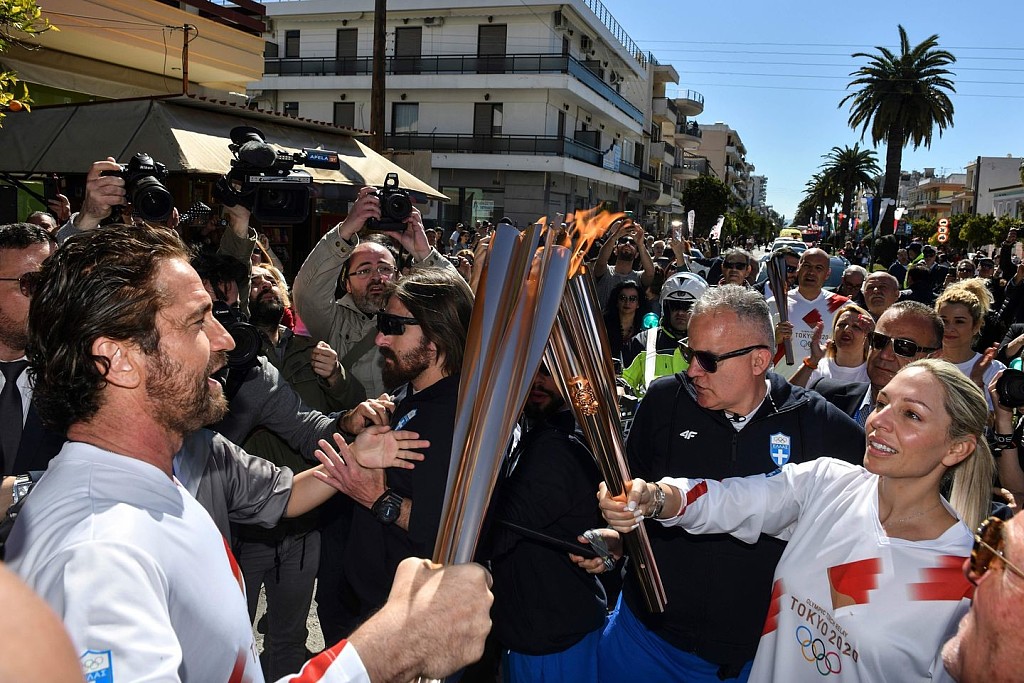 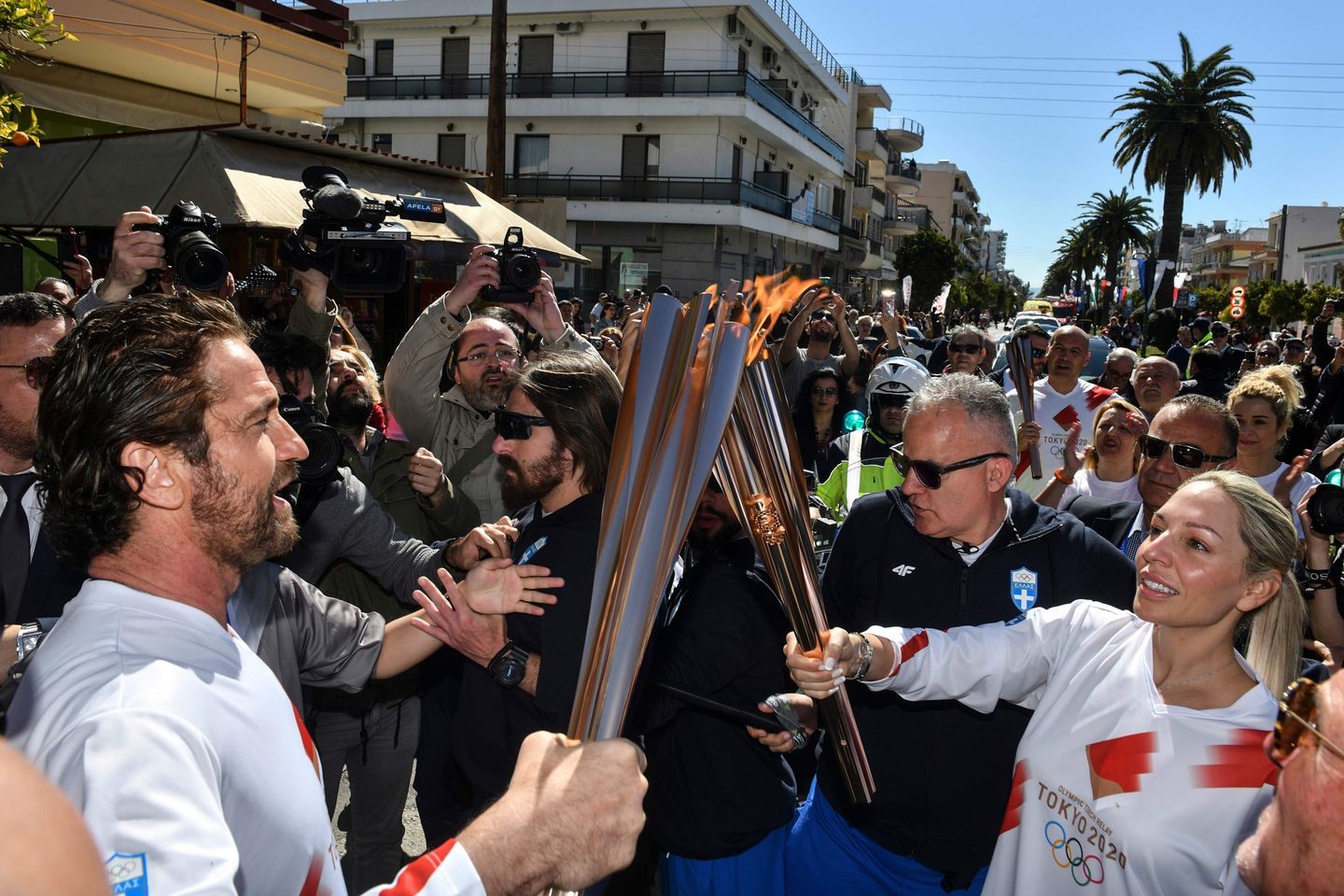 One day after flame was lit, Greece suspends Olympic torch relay because of coronavirus

The Greek Olympic Committee suspended the remainder of the 2020 Tokyo Olympics torch relay through the country on Friday due to concerns about the coronavirus outbreak. The decision came one day after the flame was lit before an unusually small crowd of accredited guests in Ancient Olympia, where the Games originated.

Amid growing fears about the coronavirus, the torch-lighting ceremony, which dates from 1936 and normally draws thousands to the Temple of Hera, was held without spectators lining the slopes of the tiny town for the first time since the 1984 Los Angeles Olympics. Greece reported its first fatality as a result of the coronavirus Thursday.

The Greek Olympic Committee said that Friday’s leg of the relay, which featured actor Gerard Butler carrying the torch through the town of Sparta, attracted unexpectedly large crowds. The handover of the flame to the Tokyo 2020 organizing committee in Athens on March 19 is still scheduled to take place, without spectators. 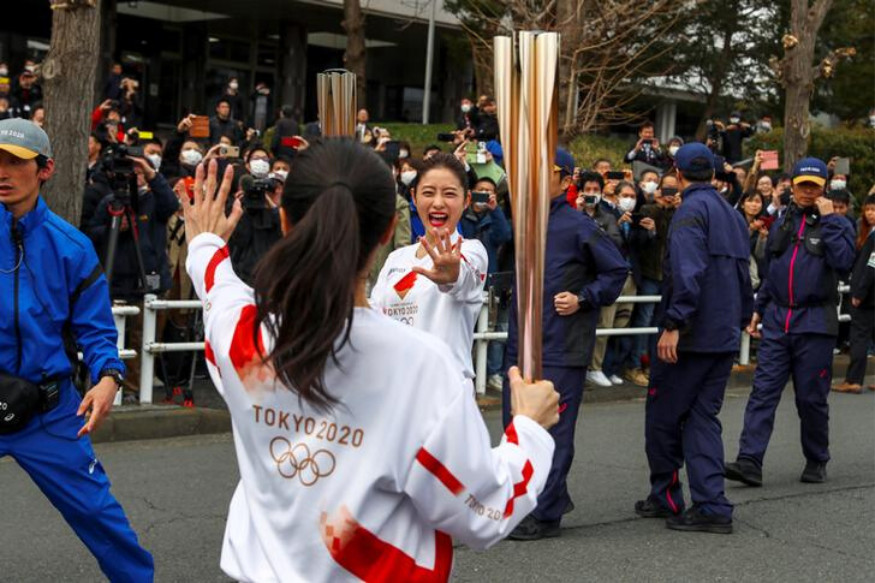 Japan’s leg of the relay is scheduled to begin March 26 in Fukushima Prefecture, which was ravaged by an earthquake, tsunami and nuclear accident in 2011. After traveling through all 47 of Japan’s prefectures, the flame is due to arrive in Tokyo 121 days later for the Opening Ceremonies on July 24. 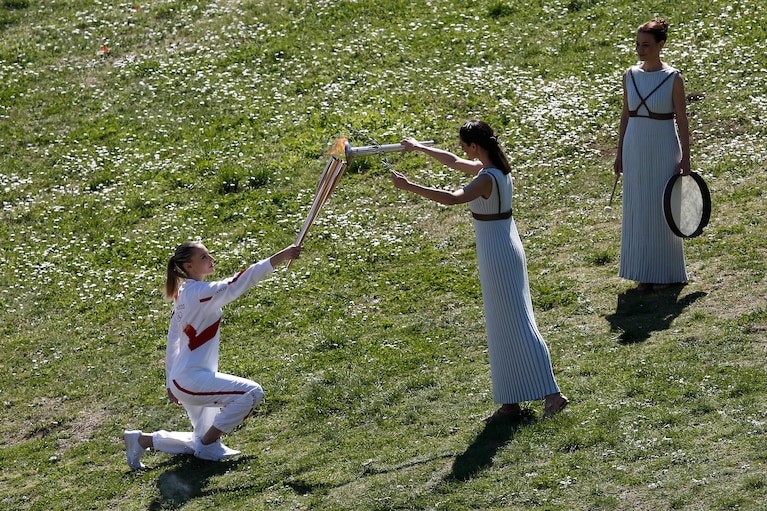 Greek actress Xanthi Georgiou used a parabolic mirror to ignite the torch on Thursday before handing it to Greek Olympic shooting champion Anna Korakaki, who became the first woman to be the first torchbearer of the torch relay. The gold medalist at the 2016 Rio Games then passed the flame to Japan’s Mizuki Noguchi, who won the gold medal in the marathon at the 2004 Athens Games.

Even as the spread of the coronavirus has led to the cancellation and postponement of sporting events across the globe, International Olympic Committee officials have been adamant that the Tokyo Games will take place as scheduled. The IOC said it intends to follow advice from the World Health Organization.

In a speech at Thursday’s ceremony, IOC President Thomas Bach thanked organizers, including the Greek Olympic Committee, for making the event possible “under difficult circumstances.”

“This demonstrates once more our commitment to the success of the Olympic Games Tokyo 2020,” Bach said. “Nineteen weeks before the Opening Ceremony, we are strengthened in this commitment by the many authorities and sports organizations around the world who are taking so many significant measures to contain the spread of the coronavirus."