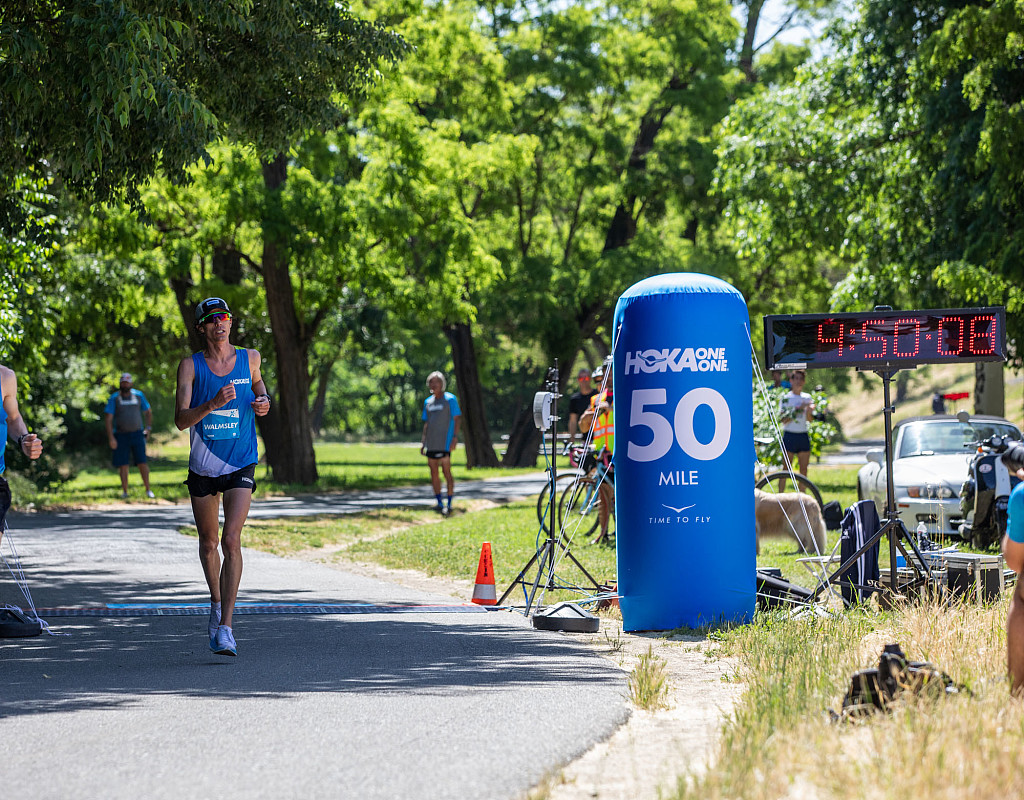 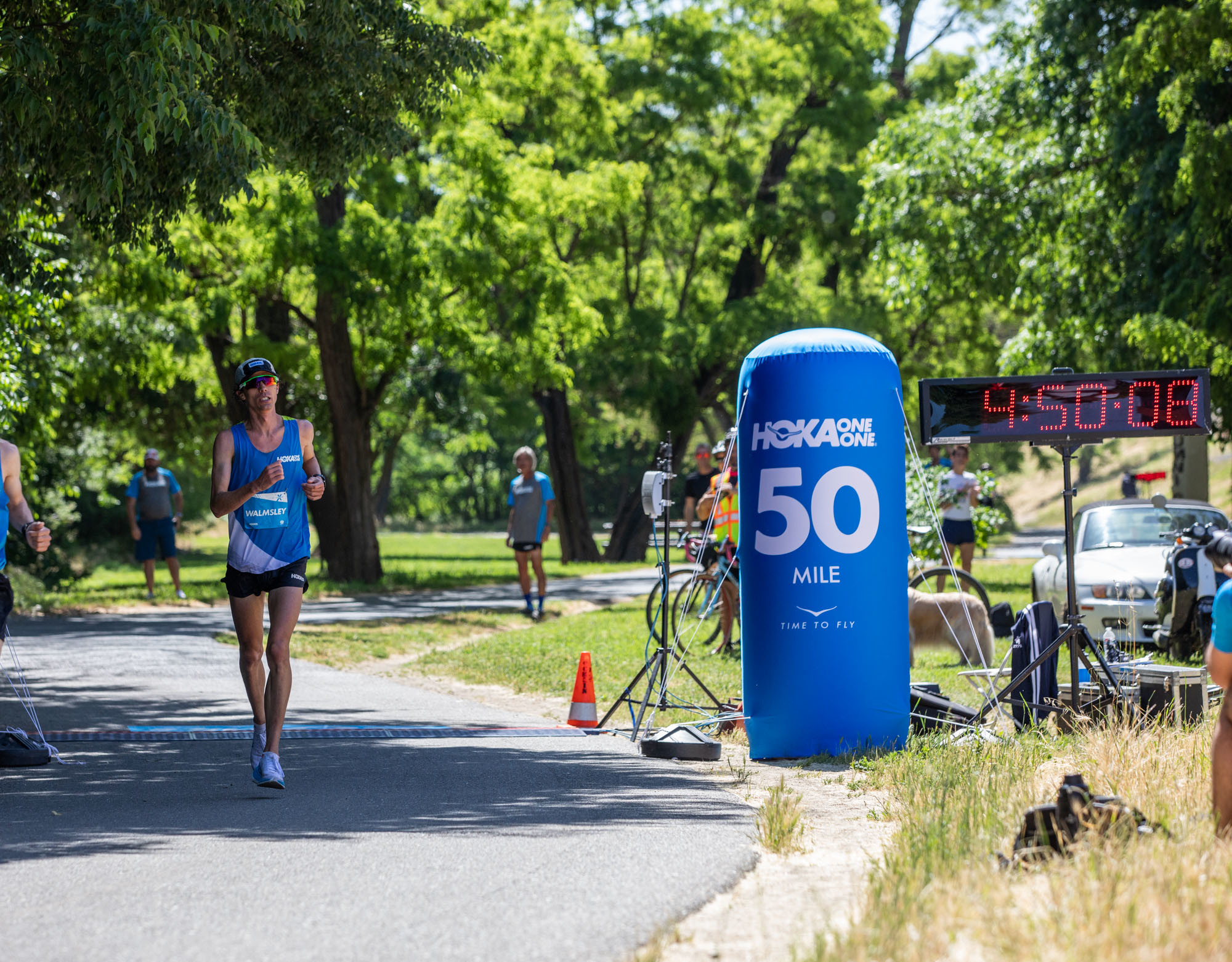 Jim Walmsley Runs Faster Than Anyone Ever for 50 Miles, Yet World Champ Hideaki Yamauchi Wins 100k

Prior to Saturday’s HOKA ONE ONE Project Carbon X 100k race in Sacramento, California American ultramarathon star Jim Walmsley said anything can happen in an ultra.

Walmsley broke the world best and American record by going through 50 miles in 4:50:08 (old world best was 4:50:51 by Bruce Fordyce in 1984; Barney Klecker’s American record of 4:51:25 was the oldest American road record on the books) and less than three minutes later he  was sitting on a table on the side of the course. Soon after, he was walking. Walmsley was reduced to high-fiving two-time defending world 100km champion Hideaki Yamauchi as Yamauchi ran by en route to victory in the 100km race in 6:19:54, over 10 minutes outside the 6:09:14 world record. 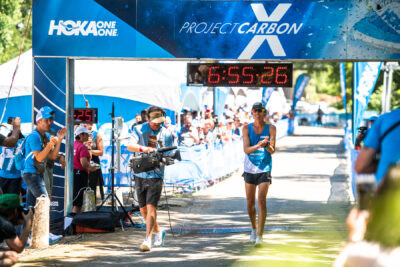 American Patrick Reagan ended up second in a personal best of 6:33:50 and Walmsley, who had to work hard not to get lapped by Yamauchi (each lap was almost 4.7 miles long), finished 4th in 7:05:24 on a day where the race started in near-perfect 51-degree conditions at 6 a.m. and ended in a blazing sun and 70+ degree heat.

American Sabrina Little was the only female finisher in 7:49:28.

The race was billed as a world record attempt at 100k, but Walmsley was also trying to break the 50-mile world best en route, and for the first 10k, the front three runners — Walmsley, Yamauchi, and Tyler Andrews, running his first race longer than 50k and also targeting the 50-mile world best — surprisingly ran within striking distance of one another on roughly 6-hour 100k pace. Yamauchi had talked about going out at a more modest pace, but afterwards said the downhill opening miles felt fine, so he ran faster than expected as he hit 15k in 54:06 (6:00:40 pace).

No human being has ever run faster for 50 miles than Jim Walmsley did today.

However, the fastest 50 miles in the history of the world had taken its toll and Walsmley immediately was reduced to a shuffle as he started jogging down the course after crossing 50 miles.

He told race commentator and training partner EricSenseman, who was in a car right in front of him, “I’m F’d.”

Any shot at the 100k world record was now out of Walmsley’s mind.

But there was a problem. To be given the official world best and American record for 50 miles, he would have to finish the 100k race (for some unknown reason, there is a rule that interim splits only count as records if the full race distance is finished).

A little more than two and a half minutes after breaking the record, Walmsley was walking on a bridge on the course. He then sat down on a drink station table and dumped water over his head and took gels. After a couple of minutes’ rest, Walmsley started walking again on the course.

Just a tad more than 10 minutes after he had run faster than anyone ever for 50 miles, Yamauchi went by Walmsley as Walmsley gave him a high five.

Now the questions that remained were how fast would Yamauchi run to the finish and could Walmsley make it to the finish.Yamauchi had gone through halfway well ahead of world record pace (he was at 3:00:34, the world record is 6:09:14), but just before 50 miles he slowed noticeably, going from just around 6:00 mile pace to over 6:30 for the two miles to 50 miles.

The world record shot was gone, but Yamauchi was still was on pace for a PR (previous PR of 6:18:22). However, on the final lap, the heat and early pace really took its toll on one of the most accomplished 100km runners in the world, as Yamauchi ran over 7:00 mile pace and had to settle for the victory in 6:19:54.

Meanwhile, Walmsley realized he might be lapped by Yamauchi and upped the pace of his jogging to hold off getting lapped by 22 seconds.

In the women’s race, Japan’s Aiko Kanematsu dropped out between 43 and 48 miles, which meant Sabrina Little was the only finisher and winner in 7:49:28.