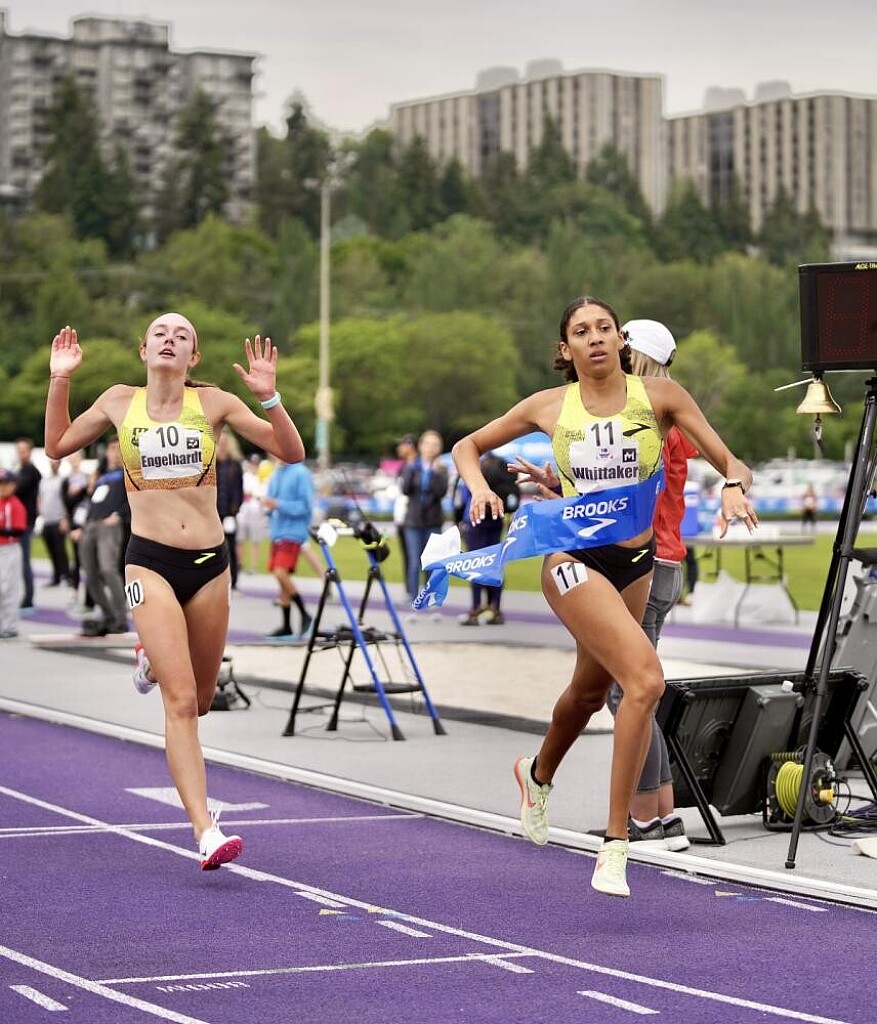 Whittaker repeats as mile champion in Seattle by edging Engelhardt and elevates to No. 7 all-time outdoor performer with 4:36.23 effort in first girls high school race with seven athletes running under 4:40

“I knew it. I knew today was going to be a crazy race,” said Flynn, a recent graduate of Traverse City Central High in Michigan.

That it was. On a cloudy Wednesday afternoon at the University of Washington’s Husky Stadium in Seattle, Flynn was part of the fastest Brooks PR Invitational mile in meet history.

Defending champion Juliette Whittaker of Mount de Sales in Maryland led the charge with a final surge down the straightaway to win in 4 minutes, 36.23 seconds, lowering her own meet record of 4:38.65 from last year.

Six girls quickly followed, all crossing the finish line under 4:40 to make it the deepest girls mile race in U.S. prep history. The boys mile also didn’t disappoint to cap the meet by having junior Simeon Birnbaum of Rapid City Stevens High in South Dakota eclipse the 4-minute barrier and five athletes run sub-4:02 for the first time in a single high school race.

“I predicted Juliette was going to win, but I was like, ‘You know what? Regardless of the winner, we’re all going to get really big PRs,’” Flynn said. “That’s why it’s Brooks PR, it lives up to the name.”

With the girls and boys miles scheduled annually as the last races of the meet, fans at Husky Stadium lined the outskirts of the track down the straightaway, creating an intimate and electric environment for the 12 female runners all capable of winning the event.

With a slight separation from the pack, Whittaker and freshman Sadie Engelhardt of Ventura High in California – who set an age 15 world mile record April 9 by running 4:35.16 at the Arcadia Invitational – came sprinting down the last 100 meters.

Similar to how the New Balance Indoor National mile championship race played out March 13 between the two athletes, Whittaker had a little more left in her to pull ahead of Engelhardt for the victory. Whittaker prevailed by a 4:37.23 to 4:37.40 margin at The Armory in New York.

Engelhardt finished runner-up Wednesday in 4:36.50, while Flynn ran 4:37.73 to set a Michigan state record by eclipsing the 2013 standard of 4:40.48 produced by Hannah Meier of Grosse Pointe South.

Riley Stewart of Cherry Creek High was fourth in 4:38.21, lowering her own Colorado state record of 4:40.66 from last year, when she placed second behind Whittaker.

“I’m feeling amazing,” Stewart said. “I’ve been 4:40 three times now, so to finally get it (under 4:40) and to run with all these amazing girls, I have to say that was probably one of the best miles we’ve ever seen come through here, so just to be part of it is just amazing.”

Every performance achieved from Engelhardt to Cochran was the fastest all-time mark by place in any high school girls mile competition.

Whittaker’s winning effort made her the No. 7 outdoor competitor in U.S. prep history, with three of the marks achieved this year, the other two coming from Dalia Frias of Mira Costa High in California (4:35.06) – who also ran the national high school outdoor 2-mile record 9:50.70 to open Wednesday’s meet – and Engelhardt’s victory at Arcadia.

Whittaker, along with Flynn, Stewart, 10th-place finisher Ava Parekh (4:52.09) of Latin School in Chicago and Roisin Willis from Stevens Point in Wisconsin – second place Wednesday in the 400 in 53.23 – are all part of Stanford’s 2022 recruiting class.

Despite having an unusual high school career due to the pandemic, Whittaker said the surge of quicker times and a more competitive environment may be due to the circumstances the pandemic created with more time for training.

“I feel like ever since COVID, honestly we have just surpassed any goals that we used to always set,” Whittaker said. “(Running) 4:40 used to be a barrier that like many people wanted to break, if so, maybe one, but the fact that seven girls (did) in the same race. I’m excited for years to come to keep watching. Sadie, obviously only being a freshman, and like other girls, I’m excited to see what times they are going to run.”

Here is the list of high school girls who have broken 4:40 before this race: