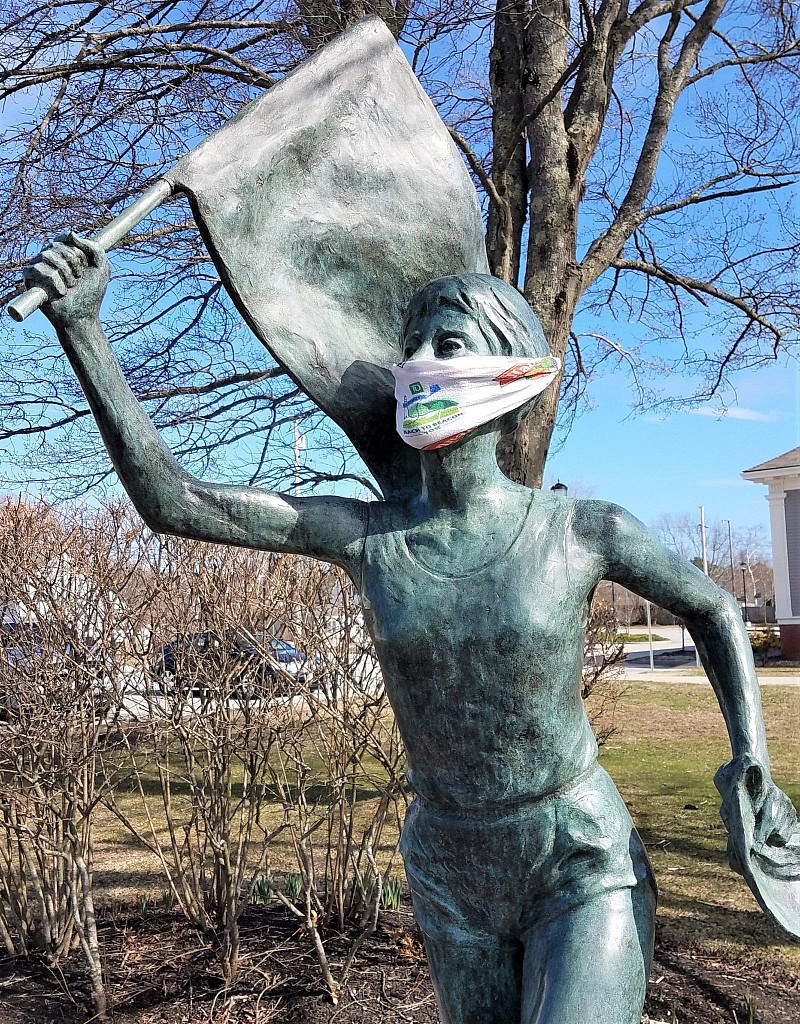 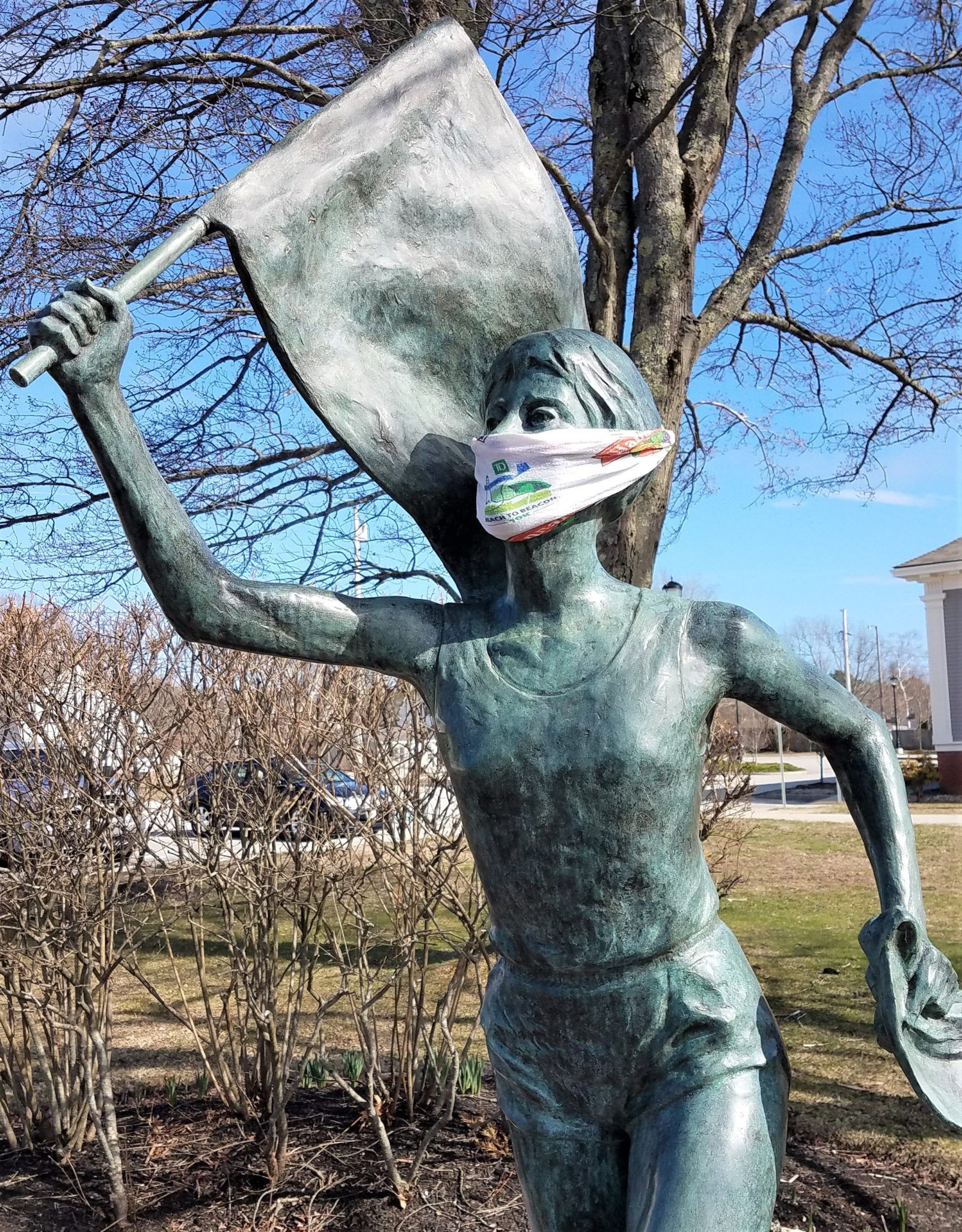 Over the weekend, famous runner statues from Boston to Boulder donned a new look to support solidarity in slowing the coronavirus.

Runners are among the healthiest people. We prize and appreciate our good fortune, and want to encourage the same in others. We’d like everyone to be health—to follow federal guidelines, both for exercise and for disease prevention.

That was the thinking behind the Runner Statue-COVID-19 Mask movement. It began Saturday morning in Mystic, CT. By Sunday afternoon, it had spread to Cape Elizabeth, Maine, Hopkinton, Massachusetts, Central Park in New York City, Davenport, Iowa, and Boulder, Colorado.

In each location, a well-known runner statue is now wearing a low-tech protective face mask. The message: Do your part to prevent the spread of COVID-19. 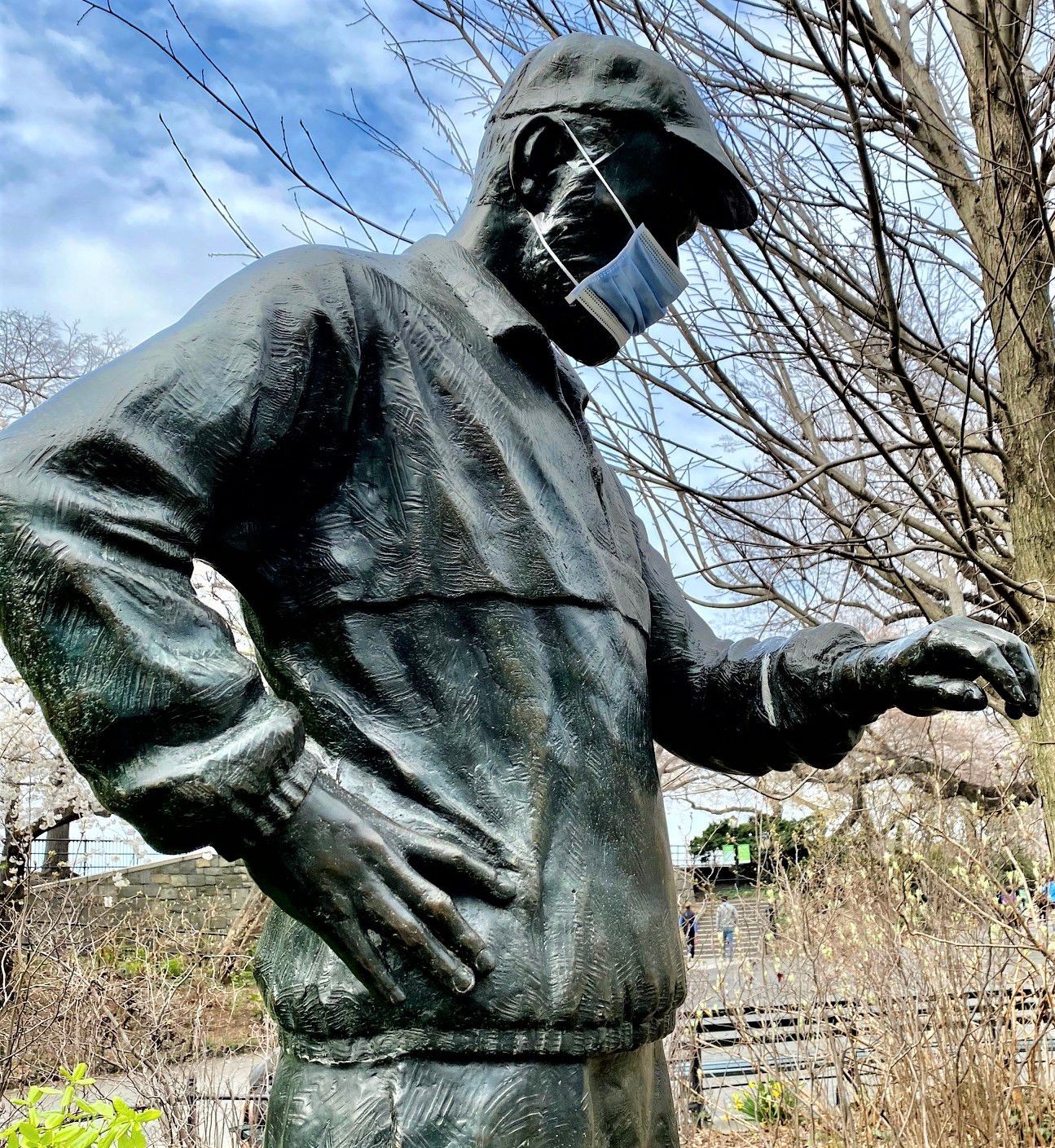 The Boston Marathon course has three such mask-wearing statues. In Hopkinton, “The Starter” George V. Brown wears a mask immediately adjacent to the Boston Marathon start line. Nearby, the statue of Rick and Dick Hoyt shows off their colorful masks.

Near the Marathon’s 19-mile mark in Newton, the double statue of “Old John” Kelley and his younger self shows them both wearing bandanna masks. These were fashioned by Ray Charbonneau from recycled road race t-shirts.

Born on a Morning Run

The story starts, like many, with a morning run. On Saturday morning, my wife, Cristina, and I met my brother, Gary, for an easy 3-mile jog on the banks of the meandering Mystic River in Connecticut. We had barely begun when Gary said, “You know what might be cool—to put a COVID mask on the Kelley statue.”

Mystics’s statue of John J. Kelley, 1957 Boston Marathon winner, has been a favorite local landmark for about five years now. It has a sparkling location in a tiny parklet that overlooks Mystic Pizza, made famous by the 1988 Julia Roberts movie. Before our biggest annual road races, Kelley is often attired in that’s year’s t-shirt.

Gary’s idea seemed so perfect that Cristina and I rushed home post-run to complete the mask project. To be honest, I merely “supervised,” since I have no sewing or crafting skills. Fortunately, Cristina is one of those creative types. She was even smart enough to realize that a statue mask would have to be larger than the bright masks she had already turned out for family members. Most statues are literally larger than life.

We rushed back to downtown Mystic to give Kel’ his new facemask. It was made of green shamrock material to honor his Irish roots. No one asked what we were doing, though several families strolled by and gave us an enthusiastic “thumbs up.”

Back home a few minutes later, I was ready for a nap. Then it hit me. I knew of a half-dozen other runner statues, and I knew runners who lived in those communities. What if I could get all those statues to wear covid masks? 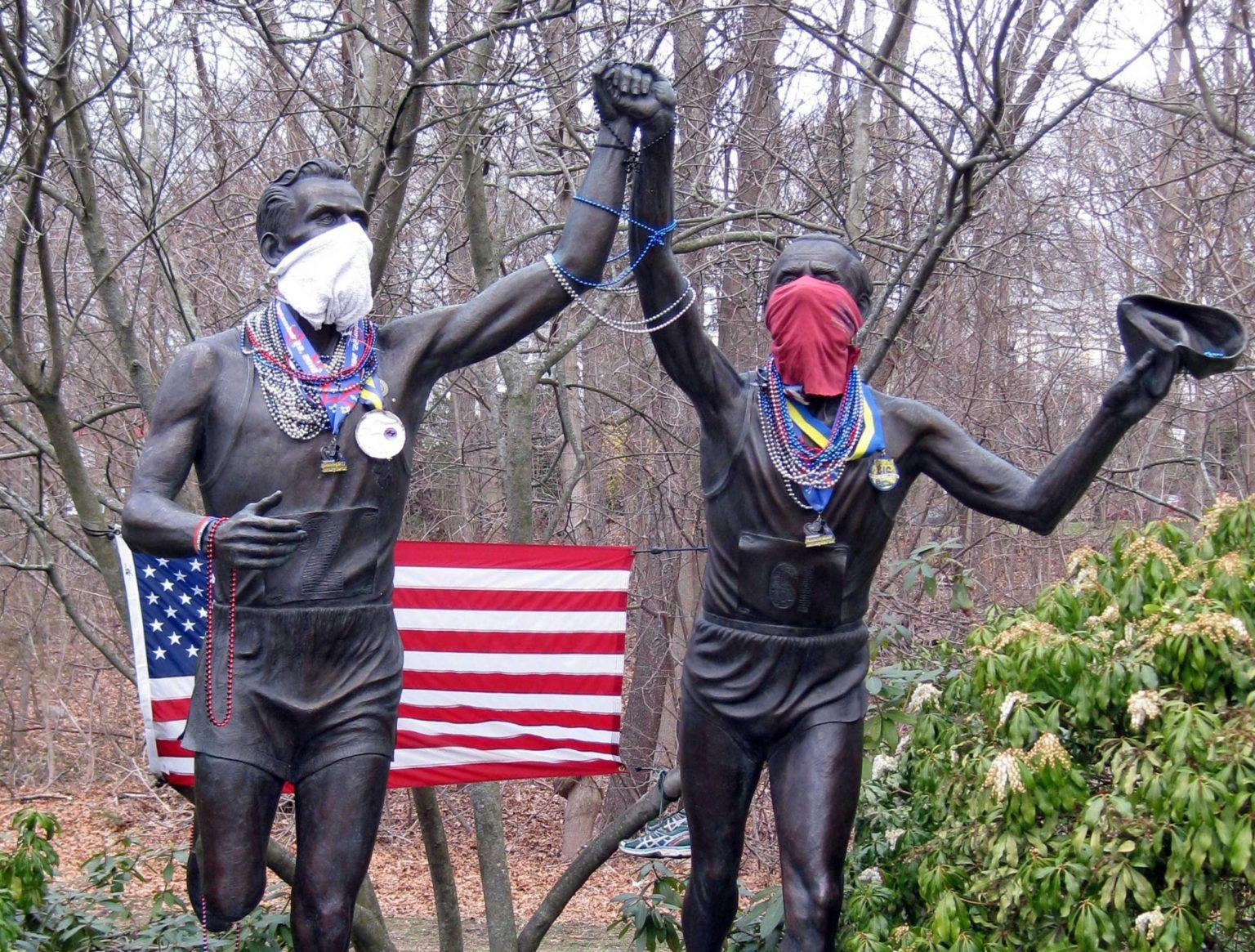 Idea Runs Across the Country

Honestly, it took little effort on my part. A handful of friends, both new and old, “ran” with the suggestion. In Central Park and Cape Elizabeth, police quickly descended on my mask-placing co-conspirators. Moments later, having heard an explanation for the masks, the very same officers volunteered to help.

My buddy in Cape Elizabeth needed it. Marty Clark was struggling on crutches to give Joan Benoit Samuelson a facelift. Now we’ll let you in on one of Joanie’s secrets: She has no ears. (Makes you more aerodynamic.) Or maybe she just has hair over her ears. In both Cape Elizabeth and Davenport, IA, where the Bix-7 has erected statues of Samuelson and Bill Rodgers, my friends had trouble keeping the mask in place.

But Bix race director Michelle Juehring persisted until she achieved success. “I love the solidarity of this project—the way it says we’re all in this together,” she observed.

Rodgers was a big fan from the get-go. “I’m so glad to be wearing a mask next to Joan Samuelson in Davenport,” he said. “If others see us, and then they wear a mask also, we’re going to beat this disease in America.

At Central Park’s reservoir, thronged with walkers and runners, a socially-distanced crowd gathered around the Fred Lebow statue. When the onlookers realized what was going on, they broke into applause. “I was stunned,” said Scott Lange, who once worked for Lebow at New York Road Runners.

In Boulder, Rich Castro got a mask onto Frank Shorter only a couple of hours after we began with Kelley in Connecticut. Castro had already worn a mask around town on his morning errands. “I hope more people help us spread the message,” he said. “There are too many nonbelievers around.”

Shorter concurred. “Any and all expressions of solidarity are a good thing,” he said.

In Hopkinton, where the Boston Marathon begins, Tim Kilduff found a talented high schooler, Emily Karp, to make masks and corralled a Hopkinton Board of Selectmen member (John Coutinho) and photographer (Bruce MacDonald) for the effort. Today, Monday April 6, this team plans to mask 1946 Boston winner Stylianos Kyriakides at the marathon’s 1-mile mark. (Look hereto see why this requires a special effort.)

“This has been fun,” Kilduff said. “It’s a good thing. I think it might really catch on.”