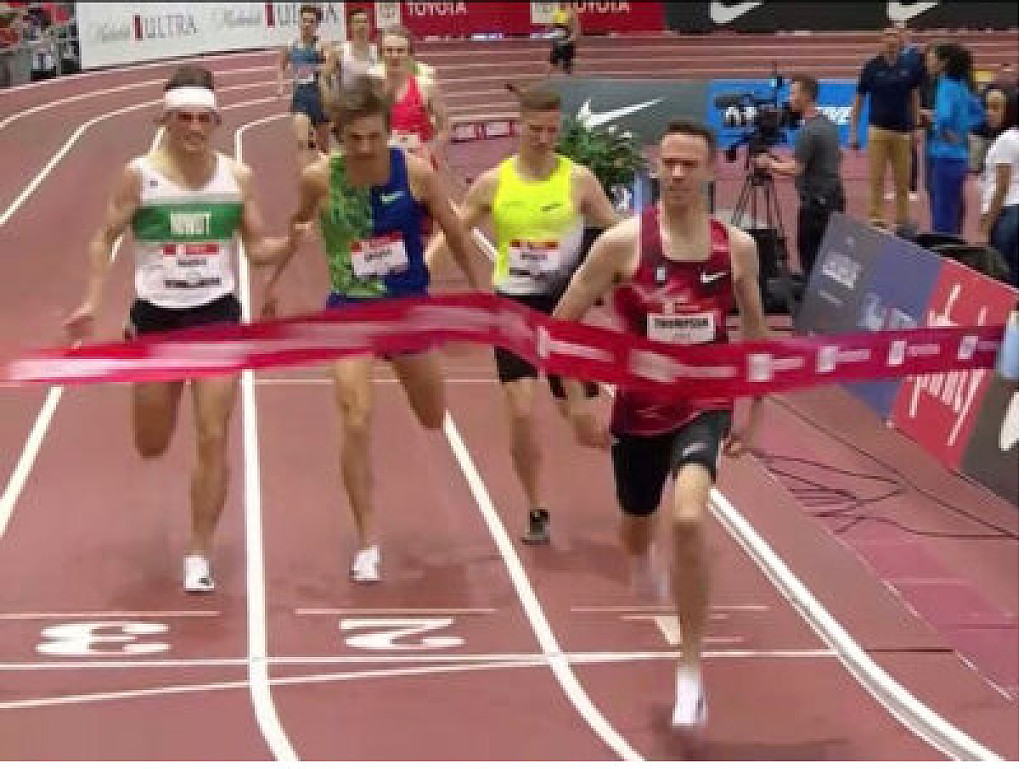 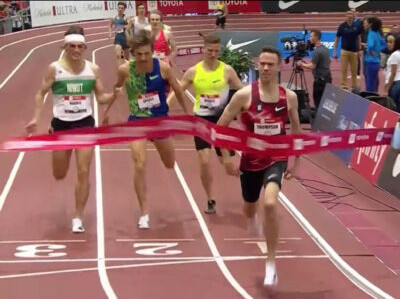 The Bowerman Track Club has owned the women’s distance events at USA Indoors in recent years, sweeping the 1500 and 3000 (or the equivalent mile/2-mile) every year since 2017. Well, more accurately, Shelby Houlihan — who earned seven of those eight titles — has owned the distance events.

Today, a Bowerman TC man finally got into the act as Josh Thompson (3:44.07) held off defending champ Craig Engels (3rd, 3:44.62) and the surprising Nick Harris (2nd, 3:44.57) in the 1500 to earn BTC’s first men’s indoor title since 2016. Coupled with another dominant Houlihan victory, it gave BTC a sweep of the metric mile at this year’s USATF Indoor Championships and capped off a successful weekend that saw Jerry Schumacher’s outfit sweep the top three spots in both the women’s 1500 and 3000. 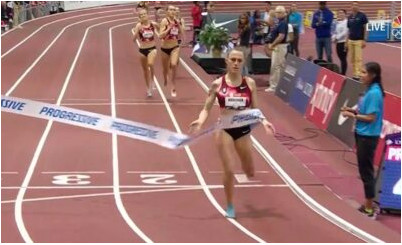 Thompson, who was trying to make it as a steeplechaser this time last year, announced himself as one of the country’s best milers by placing third in the 1500 at USA outdoors last year. Now, after his first national title, there’s no doubt about his best event.

Thompson ran a tactically perfect race, which began by putting himself in ideal position on leader Garrett O’Toole’s shoulder at 400 meters. Once Willy Fink took the lead shortly thereafter, Thompson followed along, content to stay in second as Engels moved behind him into third.

The pack was still tightly bunched when Thompson made his move to the lead at 300 to go, with the Oregon Track Club’s Vincent Ciattei following along into second. But with Olympic bronze medalist Clayton Murphy a scratch, this was always going to come down to Thompson vs. Engels, and that’s what happened once Engels passed Ciattei into second at the bell. Engels made a concerted effort to get around Thompson on the back straight, but Thompson would not yield, fighting him off and forcing Engels to run wide around the final turn. Engels, spent from the effort of trying to pass Thompson, had nothing left in the home straight, and he faded to third, nipped by unsponsored Harris at the line, as Thompson powered away to win in 3:44.07 with a 26.86 final lap.

he women’s race wasn’t quite as dramatic, especially once American mile record holder Elle Purrier was announced as a pre-race scratch following her 4th-place finish in last night’s 3k. The racing began in earnest when Karissa Schweizer took the lead with three laps to go, and it was the BTC show from there as Houlihan and Quigley followed her into second and third. It would remain that way until just over 200 to go, when Houlihan moved to the front, and, as usual, no one could match her top gear as she closed out national title #13 in 4:06.41 with a 29.87 final lap (non one else could even break 31 seconds). Quigley barely held off the impressive Schweizer for second, 4:08.30 to 4:08.32