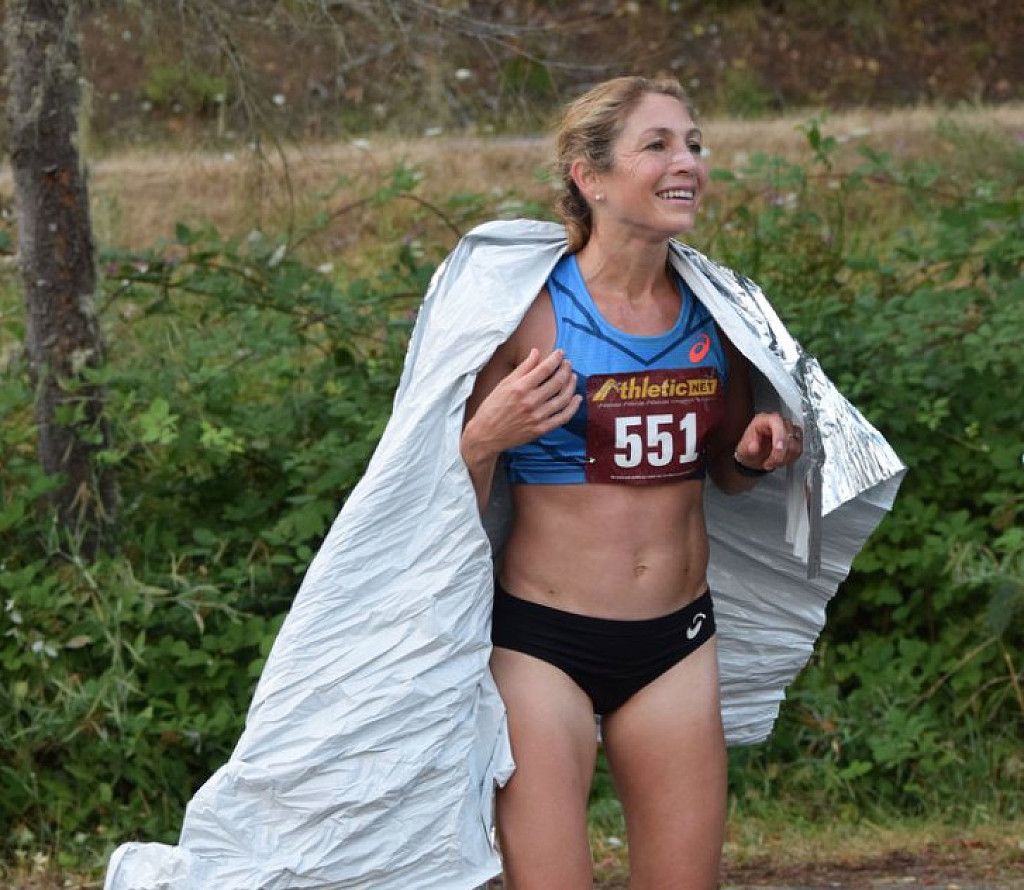 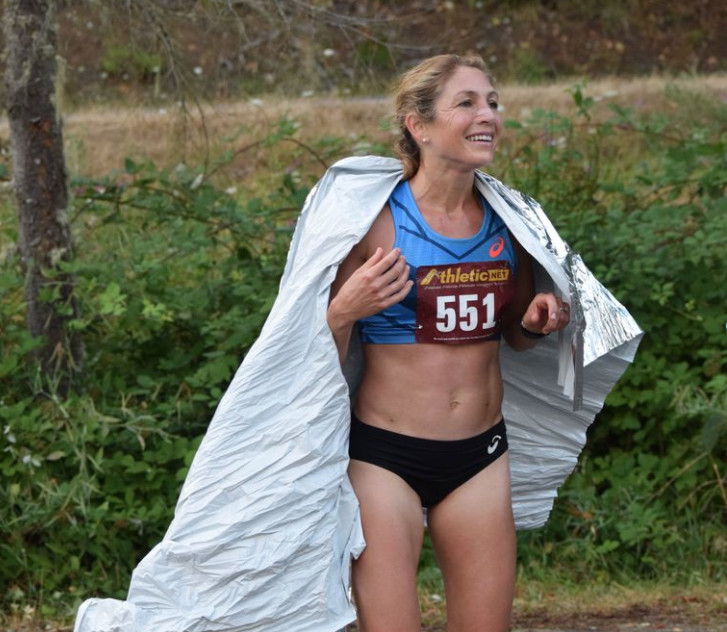 In the Oregon woods, on a bike trail along the shore of Dorena Lake, 30 miles south of Eugene, elite athlete Sara Hall ran her first race in more than five months on the roads—just her, two male pacers, and two of her four daughters, Hana and Mia, following at a distance. 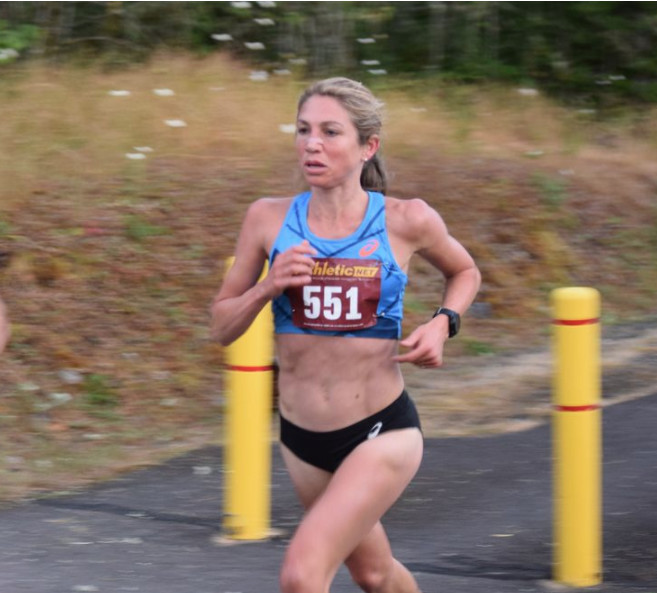 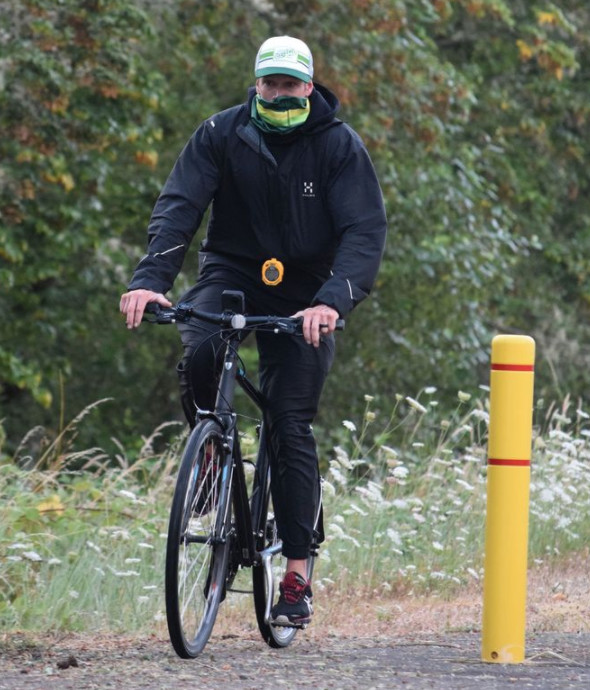 It felt like a mirage. The race, called the Row River Half Marathon and staged by the organizers of the Eugene Marathon, began at 5:52 a.m., just as the sun was beginning to rise over the hills and the overnight fog was disappearing. The small pack of runners disappeared east along the bike path to a turnaround point, came back a little more than an hour later, and quickly left the area—an effort to avoid the heat of the day and to discourage any spectators in the COVID era.

It was a far cry from Hall’s last race, the Olympic Marathon Trials on February 29 in Atlanta, where close to 700 men and women started the event and 200,000 screaming fans crammed the streets with signs and cowbells. Hall, a 2:22 marathoner who thought she was in the best shape of her life and in a good position to make her first Olympic team, dropped out after the 22-mile mark.

Typically a frequent racer, Hall has had to live with the disappointment from the Trials for five months, with no opportunities to redeem herself after the pandemic shut down all races of note. Pro runners like her have been scrambling to find opportunities to test their fitness outside of their own training while keeping within guidelines for safe events during the pandemic.

“It felt surprisingly really good, yeah,” Hall said immediately after finishing. “I wasn’t sure how I’d feel out here. I’ve been pretty buried in training because there’s no races to freshen up for. So I just am, like, grinding for forever. And I was like hopefully my legs come around. To run a big PR like that without really a race atmosphere is really encouraging.”

Hall, who lives and trains at altitude in Flagstaff, Arizona, says she’s more of a competitor than a time trialer. Without the adrenaline of a pack, she wasn’t sure if she’s be able to access all her energy. But she was.

“I tried to just keep telling myself the mantras that keep me going in training,” she said. “But it’s a little harder. When I ran my last half, it was in Houston in a pack of African runners, and I was just getting gritty and mixing it up with them. It’s definitely a different mode out here. But I’m super thankful to the guys that were helping me out through the race. That helped a lot.”

Hall was paced by Eric Finan of Eugene and Jared Carson of Portland, both of whom were also entered into the Trials.

Race director Ian Dobson, a U.S. Olympian in 2008 and friend of Ryan Hall and Sara Hall since their days at Stanford University, floated the idea of putting on a socially distant race to them a couple of months ago. All participants and staff had current negative COVID tests and provided information for contact tracing, should it be necessary. Everyone but the runners wore masks.

It was an opportunity for Hall to get a tuneup race in—she has a marathon coming up in the fall—and a chance for the events team of the Eugene Marathon to host a race, after their flagship event was canceled in April.

“We wanted to take this unique opportunity to have someone like Sara be part of the event,” Dobson said. “And we want to be part of the storytelling—what does success for the running community look like during the Coranvirus?”

He said he hopes that big races make a speedy return instead of morphing into one-off boutique events with five or fewer participants. “The mass participation road race is such a cool thing,” he said. “That’s the business we’re in; it’s what we want to do. That said, given the current reality, this is what we can do.”

The Row River course was USATF-certified and the race is in the process of being sanctioned by USATF, which would make Hall’s time eligible to appear on record lists. She and her family are staying in Eugene for another week or so for more sea level training, as she prepares for the next marathon.

“I feel over-the-moon excited,” she said of the upcoming race. “I think I’m going to be the happiest person on that starting line. I’ve put in so much training just on faith that there would be opportunities. And even though everything was just canceled canceled canceled, to be able to have an actual race—I just wanted to cry when I got in. The trials was a massive disappointment, and I really want to be able to turn the page on that and continue to build and improve.”

Although Hall can’t yet say what race that is, observers believe it is the London Marathon, which yesterday announced it will host an elite-only version of its race around a loop in St. James Park.