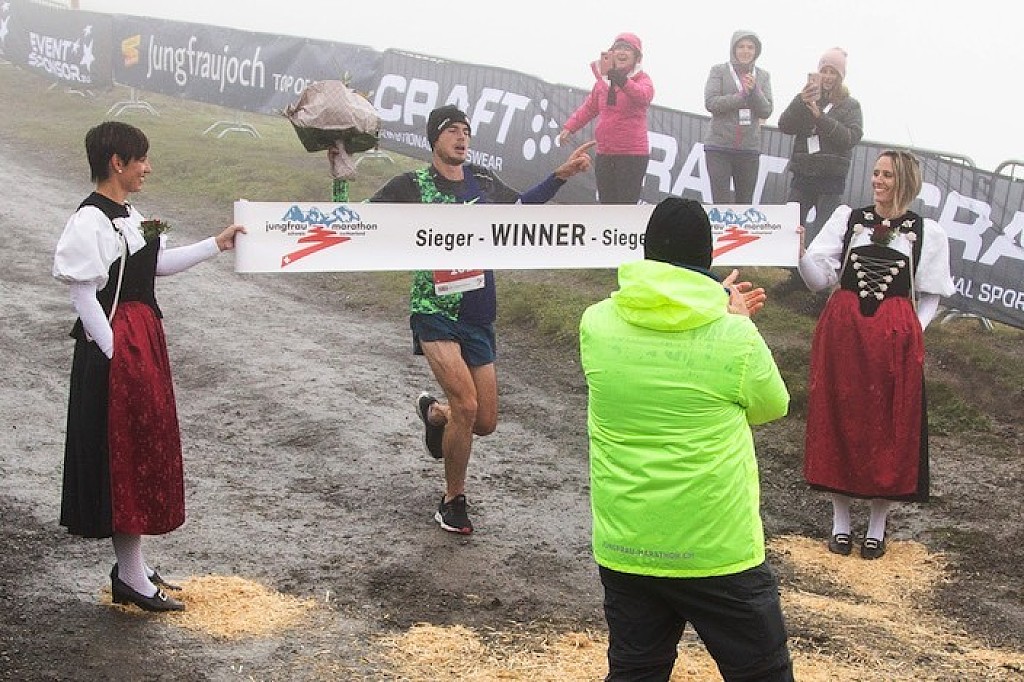 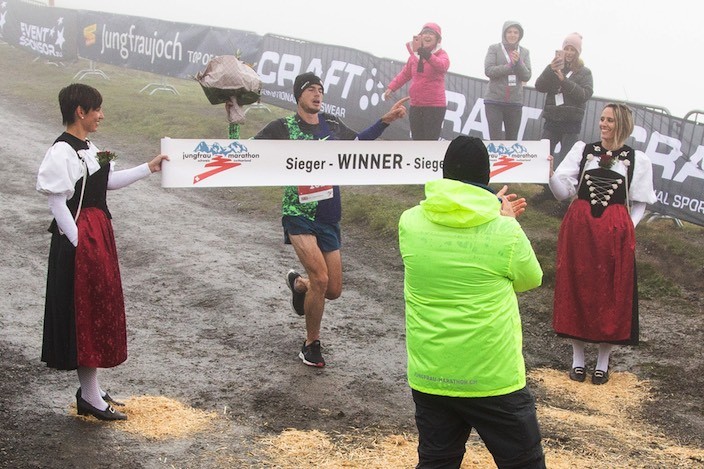 Robbie Simpson knows the route from Interlaken to Kleine Scheidegg at 2061 meters above sea level. leads, inside and out. In his fifth participation, the defending champion came but only at the end of tours. Until kilometer 38, a trio led by El Mouaziz, Eritrean Petro Mamu and Rodriguez Herrera. El Mouaziz, who already won the marathons in London and New York, made his debut at the 27th edition in Interlaken. Just four kilometers from the finish Simpson turned on and hung his competitors in an incredible finish. "I did not feel so good today. Only at the end did it go up for me. That's why I'm so happy about this victory, "said Simpson. 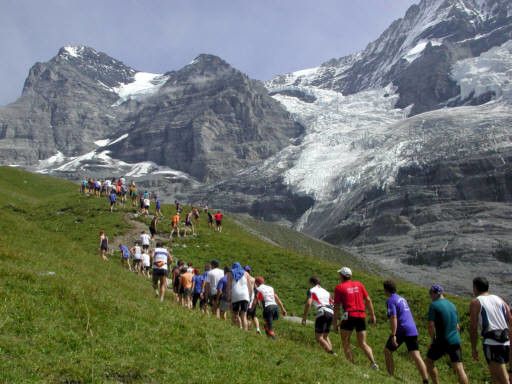 Of the 4,000 runners who were put on the track in Interlaken by the five-time OL World Champion Judith Wyder, the Zurich Stephan Wenk ranked as the best Swiss in sixth place. The 36-year-old, who already won the Swissalpine Marathon this year and placed second in the "Eiger Ultratrail", was more than satisfied with his placement: "From kilometer 10 on I felt more and more comfortable and I was doing very well. The weather did not play a big role for me today. Nevertheless, I missed the substance at the very end and I lost two more seats. My time of 3:05:23 hours is my best result ever, "rejoiced the exhausted Wenk.

A "super happy" winner,  Simone Troxler, the favorite and winner of the women, raved about the atmosphere on the 1829 meters of altitude. "It was just a wonderful experience. All the bells, alphorns and so much more - it was awesome. "Last year, the Vaud woman made her debut at the Jungfrau Marathon and is also a strong street runner, as she proved with her second place in the Lausanne Marathon in 2018. The route to the Kleine Scheidegg demanded everything from the 23-year-old. "I had to suffer a lot from Wengen. The cold was blatant and I had cramps. I really did not know how to get up there and it was also mentally difficult because I led the field alone, "Troxler admitted. With her time of 3:36:13 hours she was, despite all difficulties, only three minutes slower than last year. 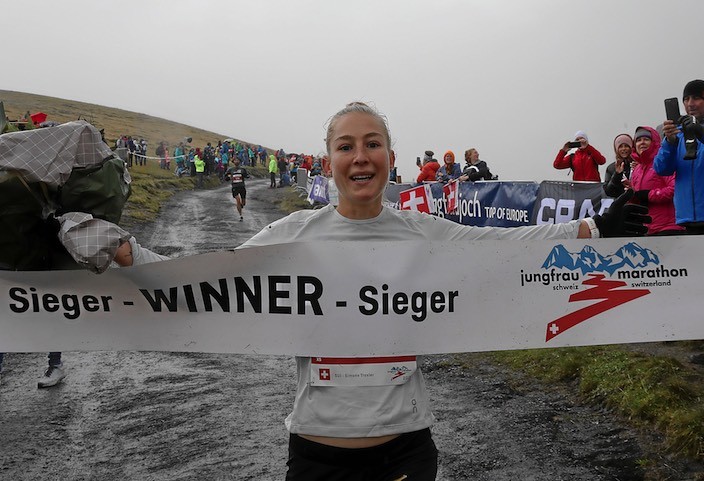 Big challenge with the weather, The cold snap and snowfall of the past days presented the organizing committee with great challenges. "Thanks to great helpers, we cleared away the snow on the track and we knew that we would be struggling with some rain and a lot of fog," said OC President Toni Alpinice. His team has worked tirelessly in the last few hours to ensure that all runners arrive at the finish line at Kleine Scheidegg. "We provided more than 5,000 sheets of heat and made sure we could distribute more warm drinks".

Popular races on the Höhematte in Interlaken, On the day before the big marathon, many para-athletes use the opportunity to prove their speed. So dominated once more the Pararace mile Marcel Hug before Beat Bösch and Heinz Frei. In the women's race, Manuel Schär beat Sandra Graf.

Virgin Minirun and Mini Marathon - the race for all, Shortly after 15 o'clock also the little ones started their races. The Jungfrau-Minirun in categories from MuKi and VaKi to the U16-Kids always attracts a lot of interest. An experience was certainly not just the run. Many children were handed over the medals by former World Cup ski racer and world champion Marco Büchel. 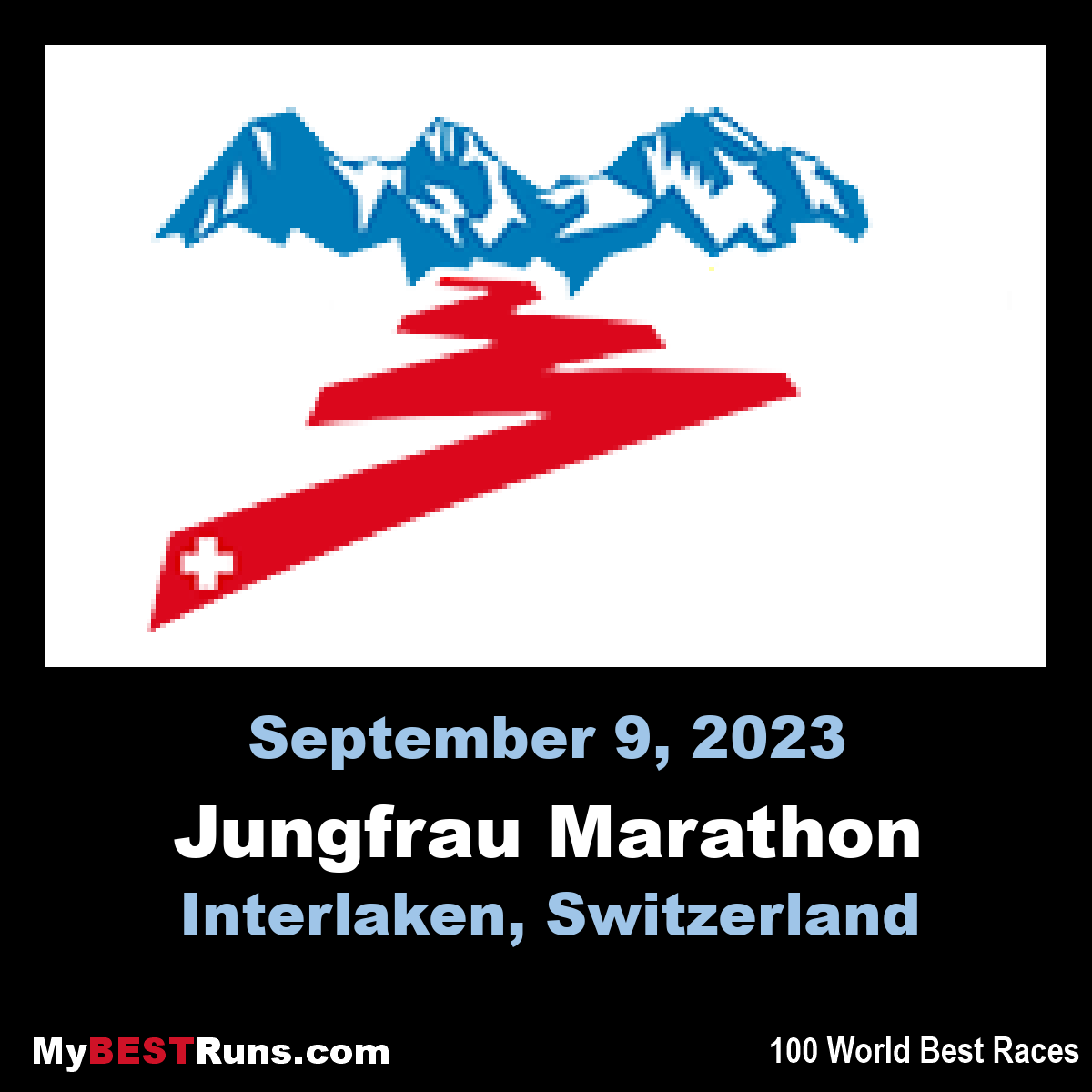 The 2020 race was cancelled. The Jungfrau-Marathon presents the most beautiful marathon course in the world - marvelous mountains scenery and the excellent change of the landscape between the start in Interlaken and the finish on Kleine Scheidegg. The difference in altitude of 1829 meter (6000 feet) is a challenge for everybody. There is no Marathon in Europe with such...