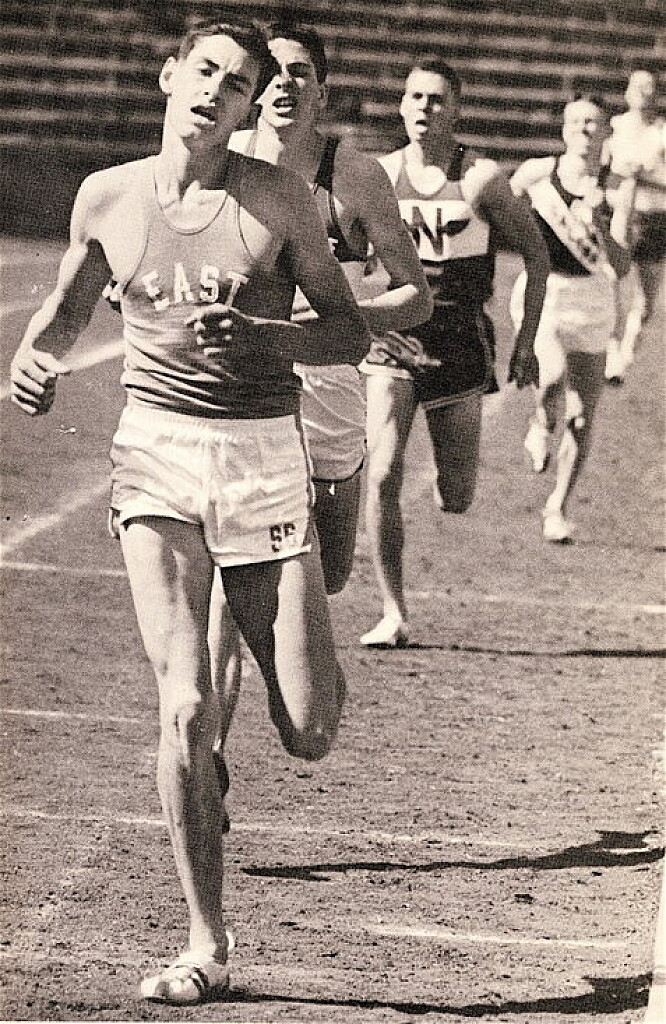 Jim Ryun was the first high school boy to break the four-minute barrier in the mile as a Kansas 17-year-old in 1964 and went on to a legendary track and field career that included three Olympic appearances in the 1,500m, a silver medal in the 1968 Mexico City Olympics, and numerous American and world records.

Ryun’s name always surfaces when a high schooler dips under 4 minutes in the mile. And in 2022, his name has been coming up a lot.

Ryun’s career was also in the spotlight earlier this month when he was one of 30 former college track and field athletes inducted into the inaugural class of the USTFCCCA’s Athlete Hall of Fame in conjunction with the NCAA Championships in Eugene, Ore. 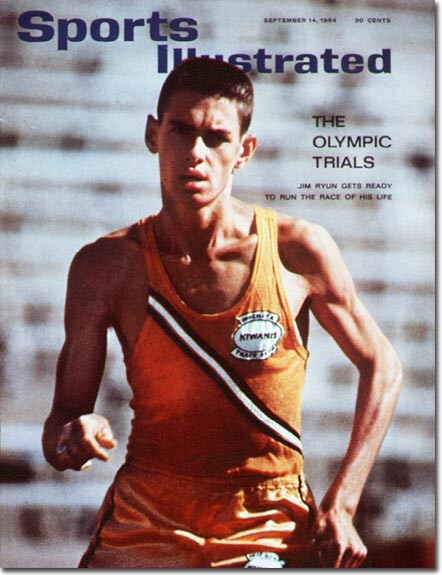 The original 4-minute high school barrier breaker celebrates the resurgence of American high school distance running and says for too long runners were held back in fear of what would happen if they ran under 4 minutes for the mile.

“I think they realize it’s not a barrier that can’t be broken, it’s more of a matter that if you break it,” Ryun said, “will you go on from there, which you can because we’re seeing more and more of them that are doing that.

“It’s not the barrier that it once was, should never have been there. For a long time, there were three of us. Myself, Marty Liquori and Tim Danielson. We were the only (sub) 4-minute milers from high school for years and I think it was the result of people being afraid of that, and coaches saying if you run too fast, too soon you’ll never make it very far.”

Growing up, Ryun often wondered if he would ever be successful in an athletic endeavor. He tried basketball and football and was cut from his church baseball team. At a high school assembly, Bob Timmons, the school’s track and field and cross country coach, encouraged students to run on his cross country team in the fall.

Ryun had never run more than one lap around a track before joining the cross country team, but in one season at Wichita East High School, he went from the last runner on the third-string team to a sixth-place finish at the Kansas state meet.

“Running was so new to me, I didn’t know who the heroes were,” Ryun recalled. “In fact, my first thought was I wanted to be a baseball, football, basketball player. Running, what’s that? So, it took a while. The first book Coach Timmons gave to me was about Emil Zatopek, the great Olympian, so I read that, and it began helping me understand about the sport.” 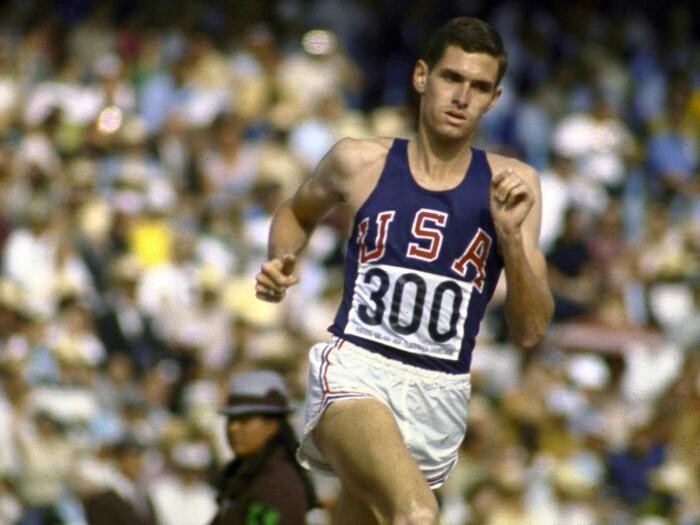 Ryun said Timmons was convinced he could be the first high school runner to break 4 minutes in the mile. That came true on June 5, 1964, when Ryun ran 3 minutes, 59.0 seconds to finish eighth at the Compton Invitational in Los Angeles.

“The goal originally was my coach’s because I was the kid that got cut from the church baseball team, didn’t have great talent and when I started running, I was looking for direction,” Ryun said. "And he began basically teaching me about goals, how to reach goals, and gave me workouts to get there. The night that I ran 4 minutes, 3:59.0, I didn’t sleep that night (before) because I realized that it was his goal.

“But my thought was, what happens if I take ownership, ownership being there’s certain things you as an athlete know you could do like maybe a little extra weightlifting, better eating. It was a transformational moment, because I mean when you finish eighth in a race and become the first kid to run under 4 minutes, that has to change your life – and it did.”

Ryun’s running career took off from there. He made the 1964 U.S. Olympic team in the 1,500m that went to Tokyo and was the last U.S. high school men’s track and field athlete to make the U.S. Olympic team until teenager Erriyon Knighton qualified for the 2020 Tokyo Olympics in the 200m and finished fourth there.

Ryun, who would stay close to home and attend Kansas University after graduating from high school in 1965, roomed with a former Jayhawks great, Billy Mills, during U.S. training camps leading up to the 1964 Olympics. In Tokyo, Mills stunned the world by becoming the only U.S. athlete to ever win the Olympic 10,000m.

In 1966, Tim Danielson became the second American high schooler to break 4 minutes when he ran 3:59.4. A year later, Marty Liquori ran 3:59.8 to become the third high schooler under 4 minutes.

After Ryun, Danielson, and Liquori, the 4-minute mile wasn’t broken by a prep athlete again for more than 32 years until Alan Webb ran 3:59.86 at the New Balance Games in New York on Jan. 20, 2001. Sensing something special in Webb, the promoters of the Prefontaine Classic in Eugene, Ore., invited him to run in the Bowerman Mile, the signature event of the meet that has since become a Diamond League event, on May 27, 2001.

Morocco’s Hicham El Guerrouj, still the world record-holder in the 1,500m and mile, won the event in 3:49.92, followed by Kevin Sullivan of Canada and Bernard Lagat, then of Kenya, who later ran for the U.S. They helped pull Webb to a fifth-place finish in 3:53.43, breaking Ryun’s 36-year-old high school record.

“I thought he would. I just didn’t know how much he would break it by," Ryun said. “It was one of those moments in time where he had run well, but he needed somebody to help him get over that finish line, just as I did running under 4 minutes for the first time. You need someone to help set the pace. You can relax a little bit, and he was able to take advantage of that.

“So, there was no real surprise to me. The biggest surprise was that there weren’t more high school boys running under 4 minutes.”

It would be another 10 years before a high schooler would break 4 minutes in the mile. In 2015, Matthew Maton and Grant Fisher, now the U.S. record-holder in the men’s 10,000m, both ran 3:59.38 about one month apart. In 2016, two runners broke 4 minutes, including Drew Hunter, who did it twice in a 15-day span in February indoors, both times in New York.

The 4-minute barrier was broken by high schoolers once in 2017 and again in 2020 during the height of the COVID-19 pandemic. In 2021, Hobbs Kessler ran the fastest high school mile since Webb when he ran 3:57.66 indoors. Kessler later that year broke Ryun’s 1,500m American junior record of 3:36.1 that stood for almost 55 years.

The lack of American high school runners breaking 4 minutes in the mile for decades might be a big reason why U.S. men haven’t enjoyed much Olympic or international success until recently. When Matthew Centrowitz won the men’s 1,500m at the 2016 Rio de Janeiro Olympics, he was the first American man to do so since 1908. At the same Olympics, Clayton Murphy won the bronze medal in the 800m, the first American man to medal in the event since 1992.

And when the World Athletics Championships are hosted on U.S. soil for the first time next month in Eugene, Ore., the defending 800m men’s champion is American Donavan Brazier.

“If you look back in history, you’d see there was a dominance maybe by a country for a time like Great Britain had all those great runners. America at one time was dominant in that area as well,” Ryun said. “So, I think it’s a matter of floating from place to place, and I think it comes down to motivation. How motivated are you?

“Over time you start realizing that motivation has to come down to you be willing to get up, run in all kinds of weather, race all over the world and let those talents be developed that God’s given you. So, it takes time. I think America can come back with dominance, but it also comes down to how motivated you are. I see the Kenyans as very motivated, and America can be just as motivated as you see with these new young runners that are developing quickly.”

That has proven to be the case this season. Seventeen high school runners have broken the 4-minute barrier, and 2022 has been the banner season for it so far with five runners breaking the mark seven times.

“I think a lot of coaches are seeing, too, that kids are just developing a lot faster doesn’t mean you’re going to burn out,” Ryun said. “It means you’ve got great opportunities. Will you decide to keep it going and, in my case, will you take ownership? The coach can only take you so far, but then you have to establish ownership.”

The owner of the fastest prep mile this year is Colin Sahlman, who ran 3:58.81 indoors in February, and, like Webb, was invited to the Bowerman Mile at the Prefontaine Classic. In a field that included 2020 Tokyo Olympic 1,500m gold medalist Jackob Ingebrigtsen, defending World Athletics Championships 1,500m gold medalist Timothy Cheruiyot, and defending 1,500m NCAA outdoor champion Cole Hocker, Sahlman finished 13th in 3:56.24. Of the 14 men who finished the race, seven set personal bests and seven set season bests, including Ingebrigtsen, whose time of 3:49.76 is the fastest in the world this year.

Sahlman’s time moved him to third on the all-time prep list behind Webb and Ryun. Sahlman, who is headed to Northern Arizona University for college, was part of a high school powerhouse at Newbury Park High in Southern California. In 2021, Newbury Park became the first high school team to have four runners break 4:10 for the mile in the same season.

“That mindset has really evolved and developed over these last three to four years,” Sahlman said in a March article in the Los Angeles Times. “It’s just like it’s transformed into something that we never thought was possible. Now we think anything’s possible.”

Those two performances gave the Festival of Miles four prep runners who have broken 4 minutes. That’s where Fisher did in 2015, a feat repeated by Reed Brown a year later.

And one day after Martin and Burns broke 4 minutes, Rheinhardt Harrison ran 3:59.33 in Florida on June 3. On June 15, Simeon Birnbaum added to the list of sub-4 minute runners when he became the second high school junior this season to break the mark with a time of 3:59.51.

Will this high school running resurgence lead to greater U.S. success against international competition and major global championships? Only time will tell.