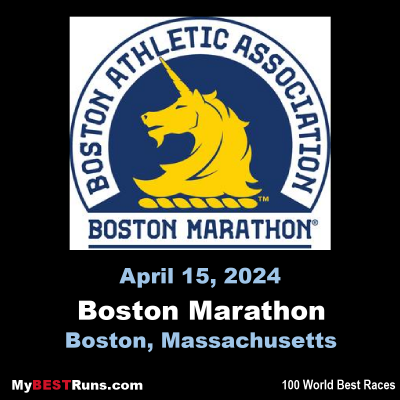 Among the nation’s oldest athletic clubs, the B.A.A. was established in 1887, and, in 1896, more than half of the U.S. Olympic Team at the first modern games was composed of B.A.A. club members. The Olympic Games provided the inspiration for the first Boston Marathon, which culminated the B.A.A. Games on April 19, 1897. John J. McDermott emerged from a 15-member starting field to complete the course (then 24.5 miles) in a winning time of 2:55:10.

The Boston Marathon has since become the world’s oldest annually contested marathon. The addition of principal sponsor John Hancock Financial Services in 1986 has solidified the event’s success over the past 30 years and ensures it well into the future.

To qualify for the Boston Marathon, athletes must meet time standards which correspond to their age and gender. 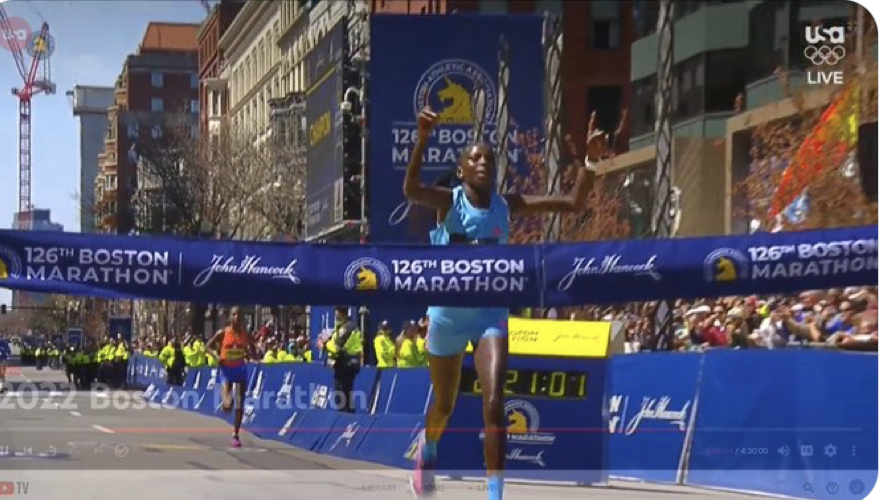 Jean Pommier
Boston is the most renown and illustrious marathon with amazing crowd support along a legendary point-to-point course. What more is there to say? It's the Boston Marathon.
Bob Anderson
I ran the Boston Marathon for the first time in 2013 when I turned 65. I had been around the marathon for years but never had a chance to participant. All I can say is that I felt like a rock star the whole way. The crowd support is amazing. This was the most exciting running experience I have ever had. I finished in 3:32:17.
Race Date: 01/11/2020 Distance: Marathon 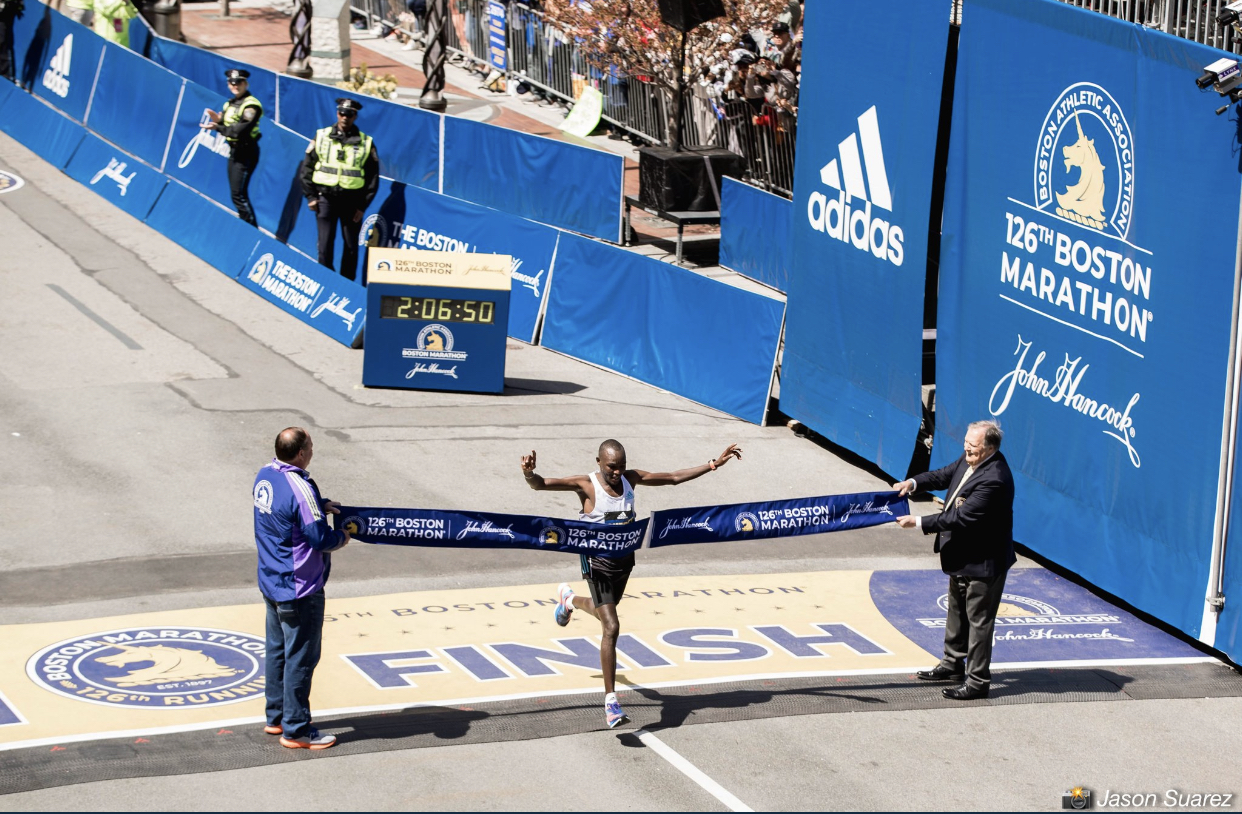 When she arrived in Boston last week, Worknesh Degefa’s marathon resume included one race: Dubai, which she has run the past three years. With the elevation profile of a dining room table, it does not seem the ideal training ground for Heartbreak Hill and its Newton brethren.

But Arsi, a zone of the Oromia Region in Ethiopia? That’s another matter. And that’s where Degefa trains, on hills that both mimic and dwarf the ones she tackled on Monday. Toss in the memory of last year’s TV coverage (“I put that video in my mind today”) and a 2:17:41 personal best, and the fastest woman in the 2019 Boston Marathon field – despite having never seen the course in person – needed only one more ingredient: nerve.

“I am ready to win,” said the 28-year-old, the fourth-fastest woman in history at the distance, at the pre-race press conference.

“I’m happy the race took place after the rain was done,” she said, referring to an early morning deluge. I’m so happy that I won. Today is the most wonderful.”

The marker for Mile 5 had not yet been reached when Degefa began to put it all together. After pedestrian early miles of 5:47, 5:43 and 5:40,

Degefa threw down a 5:23, followed by a 5:16 and then a 5:12 – the fastest of the day – as she sensed the need to get away early from veteran strategists such as Kiplagat, 2012 champion Sharon Cherop and defending champion Des Linden.

“If I stayed longer, at the finish maybe I would not make it. I knew I had some speed,” Degefa explained.

At first, Cherop and Mare Dibaba, the 2016 Olympic bronze medalist who has twice finished second here, gave chase, but they were reeled in by the pack before 20K while Degefa continued to build her lead.

“You know [Degefa’s] ability,” said Linden, who would finish fifth in 2:27:00 and tried to keep Hasay from getting too anxious. “You know what she’s done in Dubai [2:19:53 and 2:22:36 in addition to her PB] but you wonder how it translates to this course. And you wonder when she starts putting down those super quick miles. You say, ‘all right, this is her race to lose.’”

Degefa hit the halfway point in a dazzling 1:10:40, 2:27 ahead of a huge pack with the hills looming. That lead grew to almost three minutes and was still 2:26 at 35K, but the runner who had looked unbreakable a while back was beginning to show some cracks. At one point in the Newton Hills, she had crossed herself twice, looked over her shoulder, glanced at her watch. She was slowing down, and she knew it.

Meanwhile, Kiplagat had thought that if they kept increasing their pace together, the pack might catch Degefa before the finish line. She realized, however, that time was running out, so she mounted a solo pursuit. It was as futile as it was valiant, but Kiplagat was not sorry she tried.

“It was good for me because I was able to be second, and I am happy about it,” said the indefatigable 39-year-old Kiplagat, a two-time IAAF World Champion.

Hasay, 28, was top American in her comeback from a pair of stress fractures in her left heel, the first of which had caused her to withdraw from Boston last year the day before the race. She had not run a marathon since the Chicago Marathon in 2017, where her 2:20:57 made her the second-fastest American woman in history.

“Once Edna made that strong move I just tried to close hard,” Hasay said. “I was in fourth, so I was just proud to catch back up to third and get the Americans on the podium again.”

Winning the masters division was Kate Landau of Jacksonville, Florida, in 2:31:56, while Joan Benoit Samuelson, the two-time Boston champion and 1984 Olympic gold medalist, succeeded in her goal of running within 40 minutes of her 1979 winning time 40 years ago (2:35:15), coming across the line in 3:04:00.

In one of the most exciting finishes in Boston Marathon history, three men took the famous turn on Hereford Street in tandem, setting the stage for a memorable sprint down Boylston Street. The 123rd Boston Marathon would turn out to be a kicker’s classic, as Kenya’s Lawrence Cherono edged Ethiopia’s Lelisa Desisa by two seconds at the line, 2:07:57 to 2:07:59, using every ounce of energy to break the tape. Kenneth Kipkemoi finished third in 2:08:07.

Although Cherono came into the race as the fastest man in the field, courtesy of his 2:04:06 course record in Amsterdam last year, he could never have been deemed a demonstrative favorite given the depth of assembled talent that included five Boston champions. After splits of 15:10, 30:21 and 64:28 for 5K, 10K and half way, more than 20 men still were in contention at the midway point. The rolling hills and steadily increasing humidity could have been expected to take a progressive toll as the race transitioned into Newton, but no one relented.

On the first of the three infamous Newton hills, Geoffrey Kirui took the initiative, then a mile later it was American Scott Fauble moving towards the front. Fauble later commented: “It was such a surreal experience to lead a race that I grew up watching.”

The gloves finally came off at 21 miles, when the leaders had been trimmed to seven: Fauble, Kirui, Desisa, Cherono, Kipkemoi, Philemon Rono, and Felix Kandie. Kirui appeared particularly comfortable, as did Kipkemboi, despite having lost 100 meters earlier in the race when he was forced to stop to adjust his shoe. With five miles still to run, the outcome remained impossible to determine.

With the Newton hills behind them, Kirui assumed control. Increasing the tempo gradually, the 2017 champion covered mile 23 to 24 in a withering 4:31. Talam was dropped; ironically, it was a move that also proved Kirui’s undoing.

Passing Fenway Park and entering Kenmore Square, the group was down to three: Kipkemoi, Cherono and Desisa. As Kipkemoi and Cherono battled shoulder to shoulder, Desisa held his favored position -- tucked in behind, waiting to unleash the kick that has proved so effective so often.

Making the right turn onto Hereford Street in unison, Desisa injected an increase in pace that brought him from third to first inches ahead of the battling Kenyans. Swinging left onto Boylston Street with the finish line visible in the distance, Desisa surged again with hopes of solidifying his third title.

Shoulder to shoulder along the finishing straight, Desisa reached out as if to claw his way to the crown. Yet with mere feet remaining, Cherono found a reserve of speed that Desisa just could not match. Desisa almost stumbled across the line, but Cherono forged ahead, opening a two second margin and claiming the gold olive wreath in 2:07:57.

“I am so grateful, so happy,” stated the newly crowned winner, whose victory was his first in an Abbott World Marathon Majors event. “To me, I am poor in finishing races. But today, I did a fantastic job. It was very nice for me.”

Cherono’s effort showed, as he had to be held on each side as he made the champion’s walk to the awards platform. Despite the pain, Cherono couldn’t help but smile and laugh as he clutched the winner’s trophy.

“[At] 40K we were two and three people. So it was no man’s race to win,” he recounted. “But to me I keep on forecasting and the end I matched the winner. So I am grateful and so happy.”

Desisa took second in 2:07:59, with Kipkemoi rounding out the podium in 2:08:07. When asked if he was surprised he lost in a sprint, Desisa shook his head and said “For me it is the first time.”