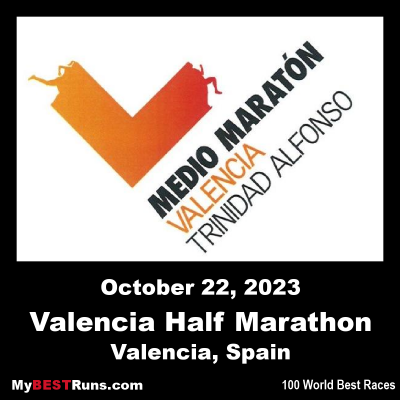 The Trinidad Alfonso Valencia Half Marathon has become one of the top running events in the world in its 26th year. For the third year running, Valencia is the fastest half marathon in the world. The race, organized by SD Correcaminos Athletics Club, celebrated its silver anniversary in style with record participation, record crowd numbers, Silver label IAAF accreditation and an atmosphere that you will not find anywhere else in the world. 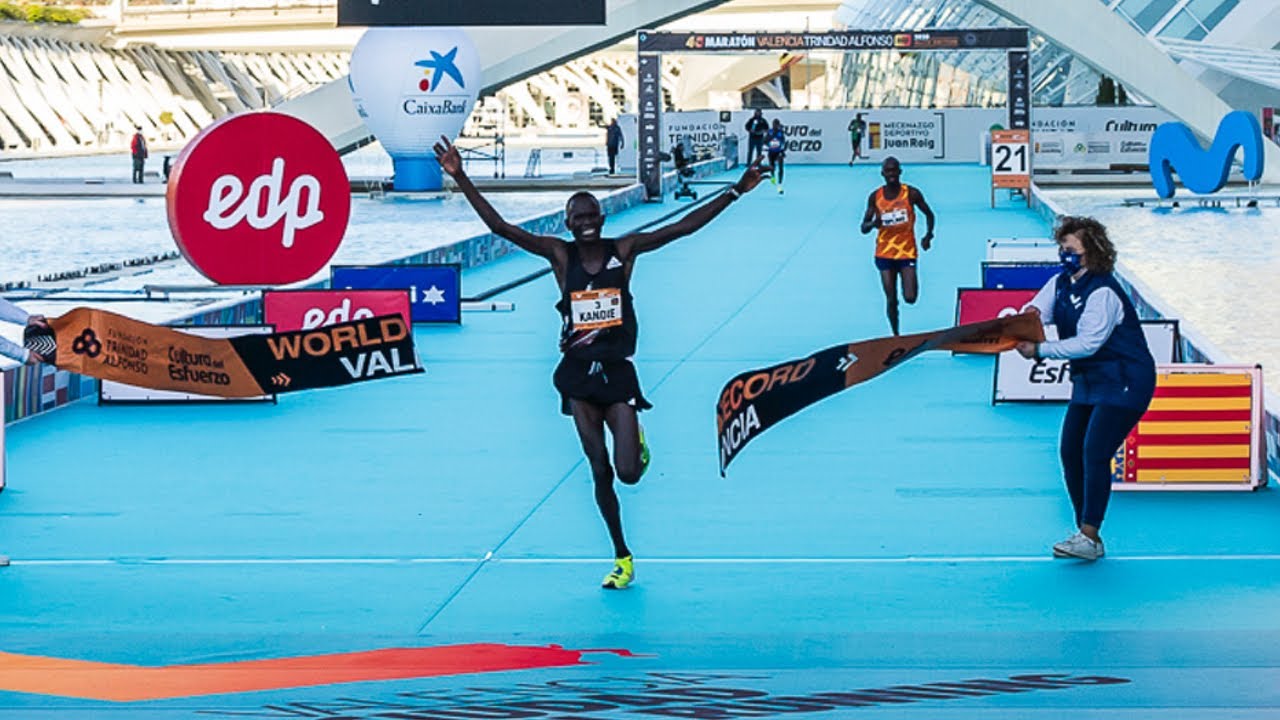 Bob Anderson
There have been lots of amazing times run on this course and at this location.
Valencia Half Marathon, Race Date: 2021-10-24, Distance: Half Marathon

Ethiopia’s Letesenbet Gidey smashed the world record* at the Valencia Half Marathon Trinidad Alfonso EDP, clocking 1:02:52 on her debut at the distance at theWorld Athletics Elite Labelroad race on Sunday (24).

In doing so, 23-year-old Gidey becomes the first woman to officially break the 64 and 63-minute barriers. She’s also the first debutante to set a world record for the distance.

Perfectly paced by her compatriot Mebrahtu Kiros, Gidey went through the opening 5km in 15:00, well inside world record pace, with her compatriot Yalemzerf Yehualaw running five metres down. Yehualaw, whose recent 1:03:44 clocking in Larne could not be ratified as a world record due to the course being too short, drifted further back over the next few kilometres as Gidey reached 10km in 29:45 – the third-fastest clocking in history for the distance and just seven seconds shy of the world record set just a few weeks ago by Kalkidan Gezahegne.

While Yehualaw began to lose ground shortly afterwards, Gidey maintained her relentless rhythm to cover the next 5km segment in 14:44, reaching the 15km point in 44:29, barely nine seconds slower than her own world best for the distance.

Underscoring the quality of Gidey’s performance, she crossed the finish line alongside Spain’s Javier Guerra, a 2:07:27 marathon runner.

“I knew I could run this kind of time as my training sessions in the altitude of Addis Abeba have gone very well,” said an ecstatic Gidey, the Olympic bronze medallist and world silver medallist over 10,000m. “In future I’m thinking of competing at the marathon distance but I’m not sure that will come before the Paris 2024 Olympic Games or later.”

Yehualaw finished second in 1:03:51, also inside the previous world record. Kenya’s Sheila Chepkirui bettered her lifetime best by 45 seconds to complete the podium in 1:04:54.

The men’s race may not have witnessed a world record, but it still had record depth with an unprecedented seven men covering the distance within 59 minutes.

Surprisingly, the three pacemakers – Josphat Kiptoo Chumo, Emmanuel Maru and Evans Kipkemei Kurui – dropped out before the seventh kilometre and from then on the main favourites took turns in the lead to keep a swift pace. The 10km checkpoint was reached in 27:35, slightly outside their target, with Kipruto and 58:48 world leader Kipchumba making most of the pacing duties alongside the surprise package Mateiko, whose career best was 59:25 set in Copenhagen last month. At that point, 10 men still remained in the lead pack.

The first serious move came in the 12th kilometre when Mateiko, a training partner of Eliud Kipchoge, tried to break away from the rest but he was soon reeled in by the main contenders, who were now running in single file.

Shortly after reaching 15km in 41:16, Kipchumba moved to the front and only Kipruto could live with his pace. With about half a kilometre to go, Kipruto surged and gained a few metres on Kipchumba, but the latter never gave up and overtook Kipruto in the closing stages to win in a world-leading 58:07 with Kipruto taking second place in 58:09.

Kipchumba’s winning time elevates him to sixth on the world all-time list. Mateiko set a huge PB of 58:24 to secure a Kenyan sweep of the podium places.