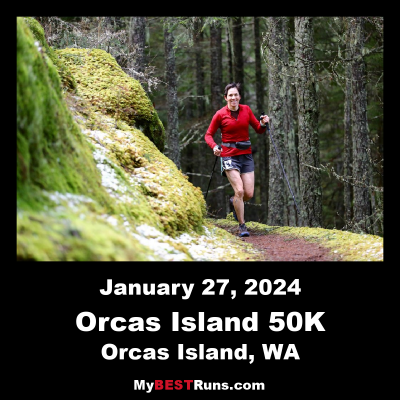 Orcas Island is the largest of the San Juan Islands, which are located in the northwestern corner of Washington state in San Juan County, Washington, United States.Mount Constitution (elevation 2409 feet - 734 meters) is the highest point in the San Juan islands. The mountain is part of Moran State Park, the largest public recreation area in the San Juan Islands. Moran State Park encompasses over 5,000 acres of woodland and has several lakes and numerous waterfalls. The park was given to the Island.

The Orcas Island 50k is unique in the trail running world, with old-growth forests, tough climbs, and spectacular views of surrounding islands, mountains, and Puget Sound, but what truly sets it apart is the chance to hang out all weekend on a gorgeous island with your trail runner friends. These are the oldest of all the Rainshadow running races. Races that will leave you wondering: Why run anywhere else?