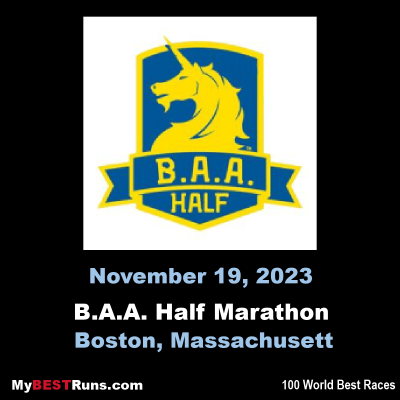 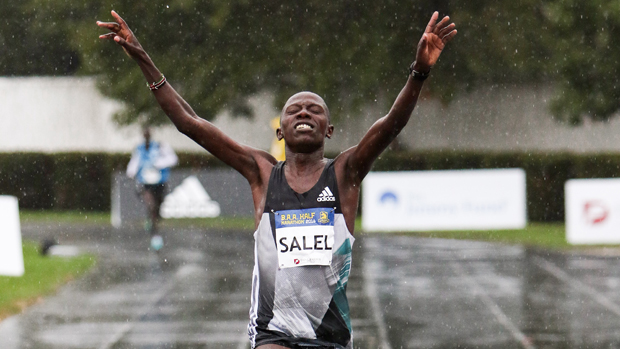 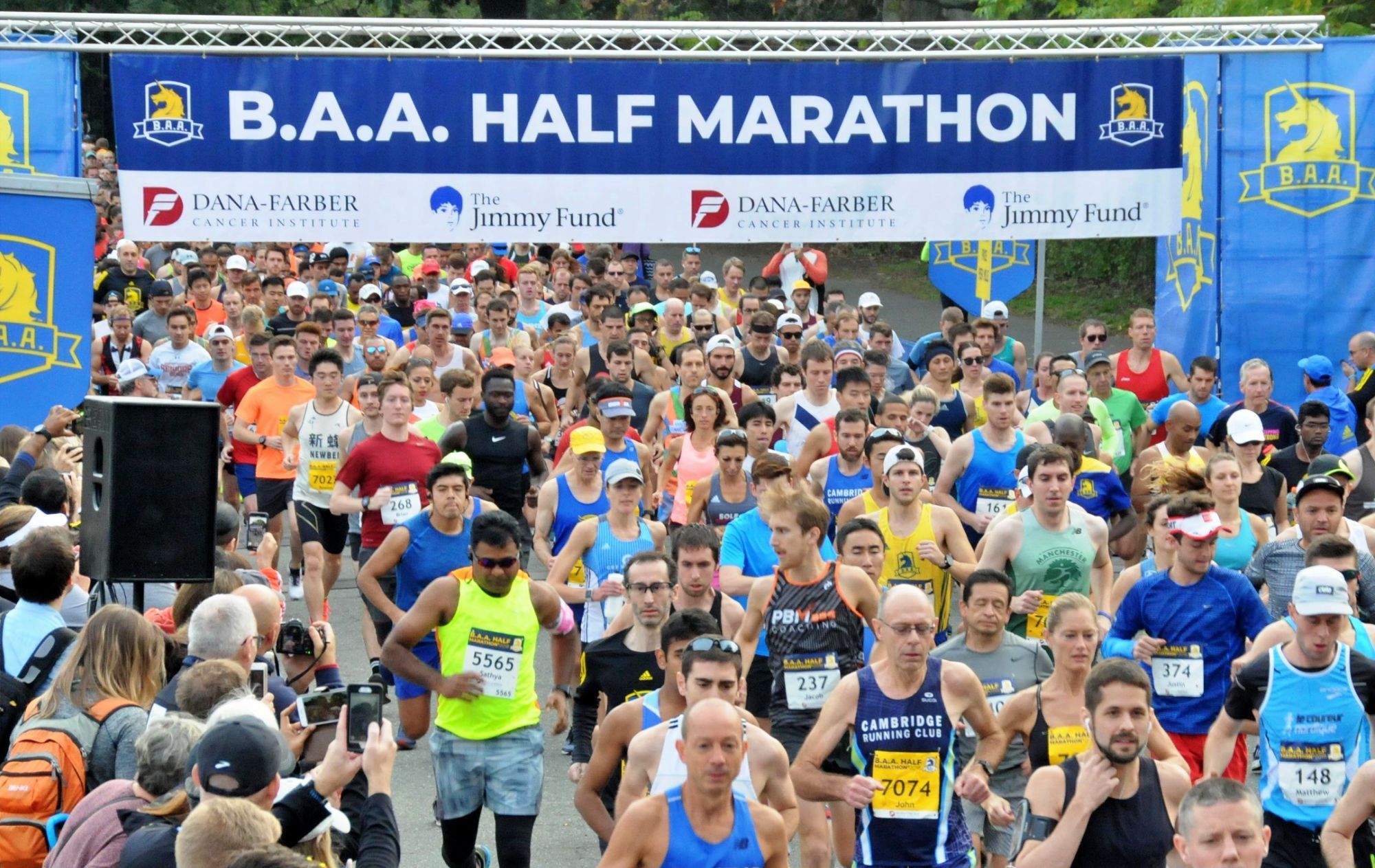 Daniel Salel earns three-peat, while Joan Chelimo runs away with title at 17th annual B.A.A. Half Marathon, presented by Dana-Farber Cancer Institute and the Jimmy Fund.

Boston, MA -- Kenyans Daniel Salel and Joan Chelimo swept the top spots at today’s 17th annual B.A.A. Half Marathon, presented by Dana-Farber Cancer Institute and the Jimmy Fund. Salel completed the three-peat, running away from a large lead pack in the final two miles before breaking the tape in 1:04:31. Calling Boston her lucky city, Chelimo returned to the Bay State and earned a commanding victory in 1:10:31.

Salel, from Eldoret, remained part of a large ten-man pack through 10K in 30:57. Among the leaders were American Olympians Abdi Abdirahman and Dathan Ritzenhein, as well as Japan’s Suguru Osako and Ethiopia’s Tesfalem Gebrearegawi.

Having run the B.A.A. Half Marathon four times and won the last two years, Salel was determined to earn another victory. Through the early hills, Salel hung tough despite consistent surges from Abdirahman.

“We started slow, we ran a slow pace through 15K. Then I started leading,” said Salel, smiling from ear to ear. “I was thinking the pace is so slow that we might run a poor time. So, I decided to move and go. After 15K I decided to take the lead, push the pace, take it higher.”

Once Salel made his move approaching Franklin Park Zoo, the race was all but over. Osako and Gebrearegawi did their best to respond, but they simply could not match Salel’s speed over the final kilometers. Leaving the Zoo with about a kilometer to go, Salel was all alone. He’d maintain the lead through the finish, breaking the tape in 1:04:31. Osako was second in 1:04:42, with Gebrearegawi completing the podium in third (1:04:45).

“I’m so happy, very happy to win again for the third time. I like the course, I like Boston, and I’ve been champion three times,” Salel said. With the win, Salel earns a $10,000 first-place prize. He called Boston his second home, proclaiming the roads and people of Boston his favorite. “The crowd was supporting me, yelling my name. The crowd was so nice.”

On the women’s side, Joan Chelimo controlled the race from start to finish. Departing Franklin Park on the heels of the elite men, Chelimo passed two miles in 10:01 with the men less than ten seconds ahead. Buze Diriba stuck alongside as best she could, though the pace proved to be too much by five miles.

“I just wanted to try the first mile and then go fast and see if someone could follow me. Only one lady followed me, but later she just suffered so my [strategy] worked,” Chelimo said.

Chelimo’s early tempo put her on pace to challenge Mamitu Daska’s course record of 1:08:20, passing 10K in 32:20. But, the humid conditions soon began to take their toll and slow the pace down. Chelimo pushed on alone all the while Diane Nukuri, Biruktayit Degefa, and Diriba ran together nearly a minute behind.

Though Nukuri and Degefa began chipping away at her lead, Chelimo was not to be denied a victory. She’d find a second-wind in the final 5K before entering Franklin Park all alone, taking the win in 1:10:31.

“It is so special for me. I really love this city, coming back to Boston and doing my best and winning again, I am so grateful. I feel like Boston is my lucky city,” said Chelimo, wearing her B.A.A. Half Marathon medal proudly around her neck.

By winning her second B.A.A. event this year, Chelimo earned a $20,000 bonus to go along with her $10,000 first-place prize. She vowed to return again in the future. “Hopefully next year, if I get lucky and get invited again to Boston, I would love to come and break the [course] record. It is my lucky city again. When I start preparing for the marathon in 2019, I would love to come to Boston again and be lucky like today, too.”

New Jersey’s Tony Nogueira won the men’s wheelchair title for the eleventh time, breaking the tape in 58:02. Carla Trodella was the women’s wheelchair champion in 3:31:37, her fourth title since 2011. 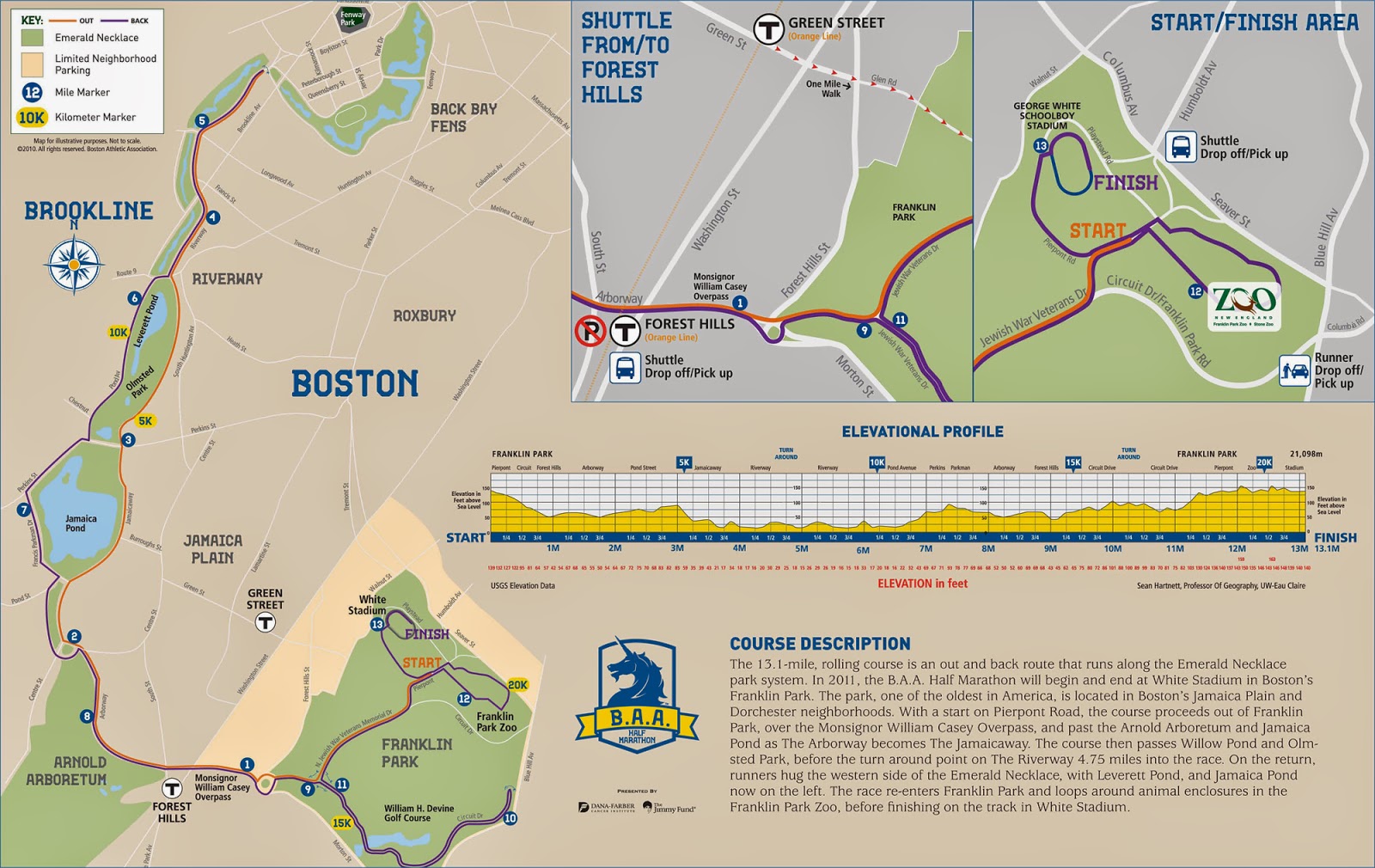