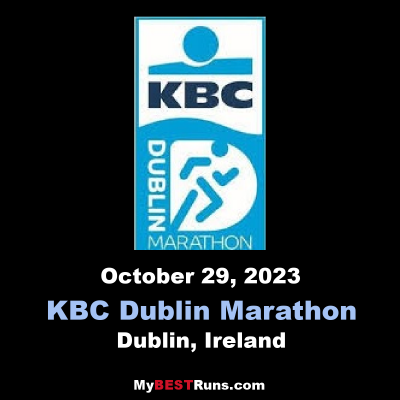 The KBC Dublin Marathon, which is run through the historic Georgian streets of Dublin, Ireland's largest and capital city.

The course is largely flat and is a single lap, starting and finishing close to the City Centre. Conditions formarathon running are ideal. 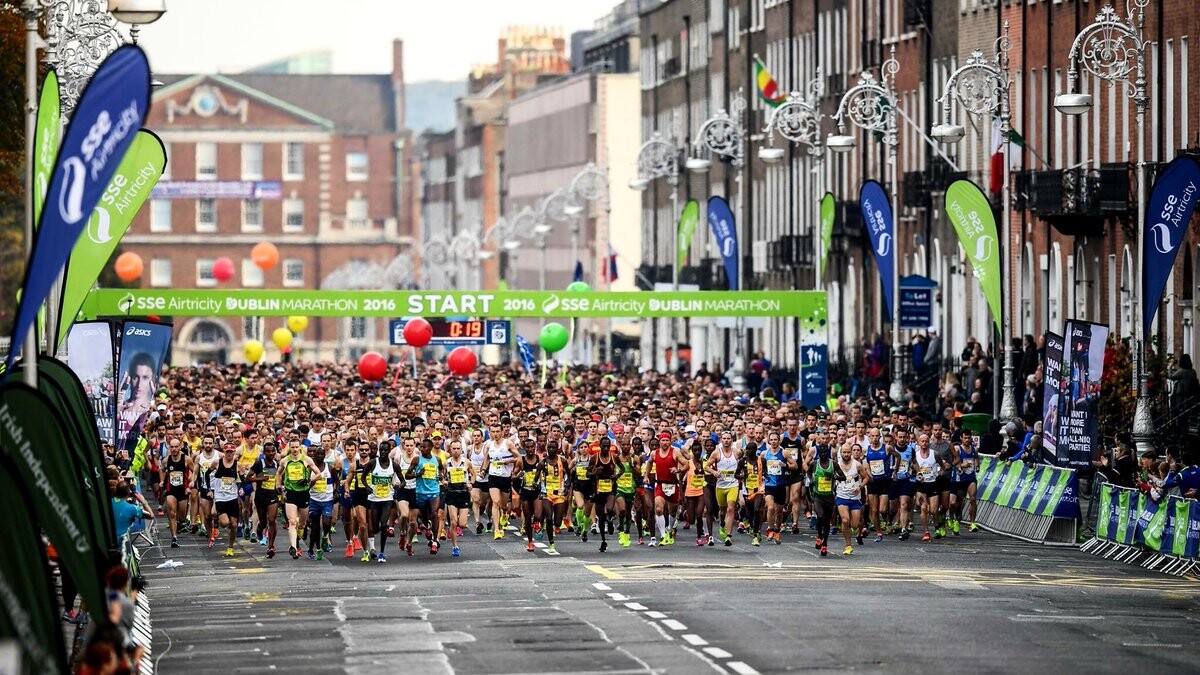 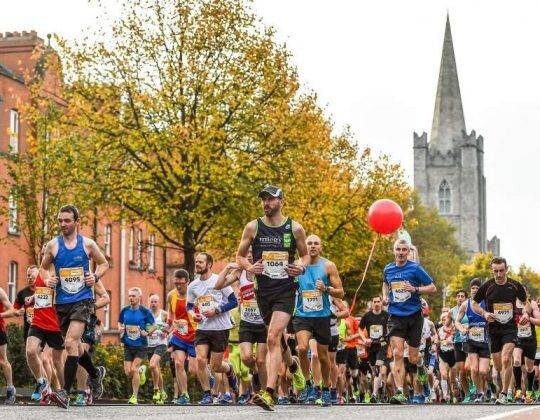 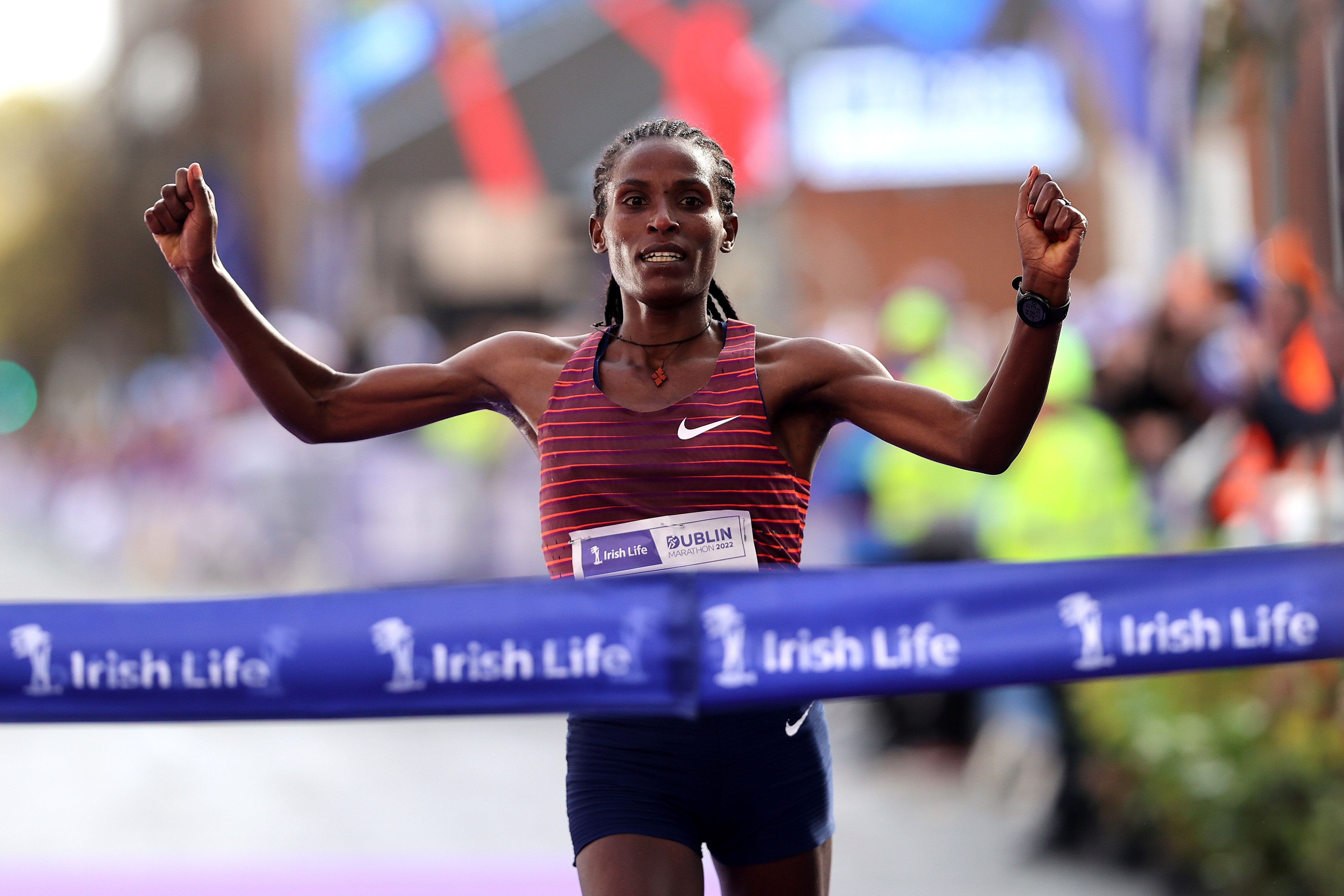 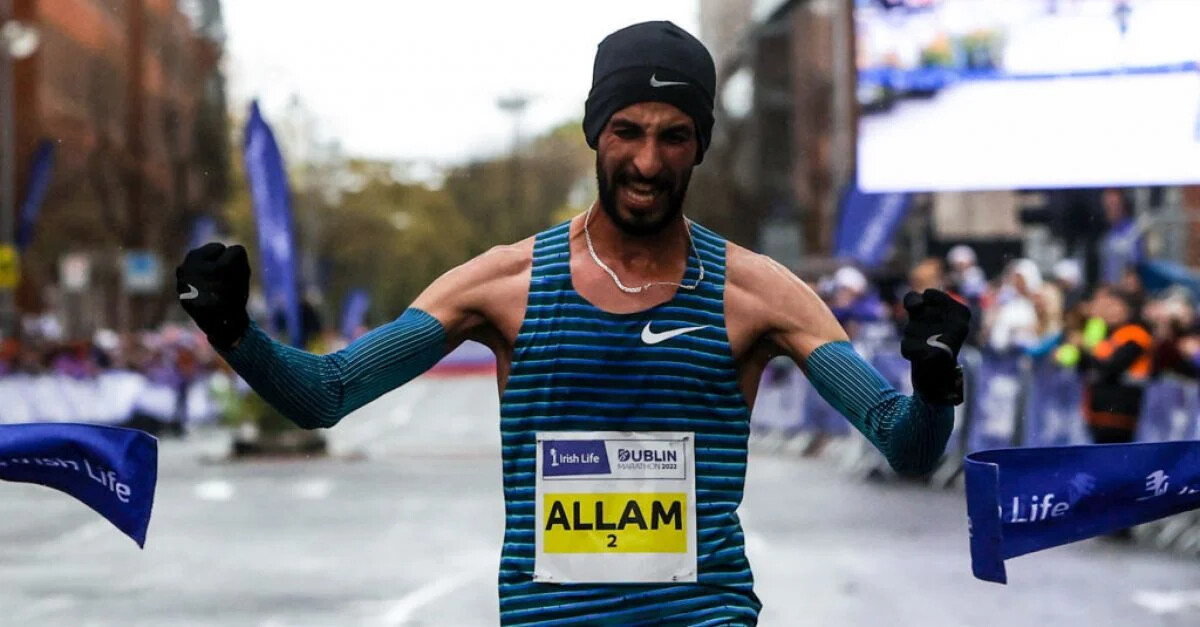 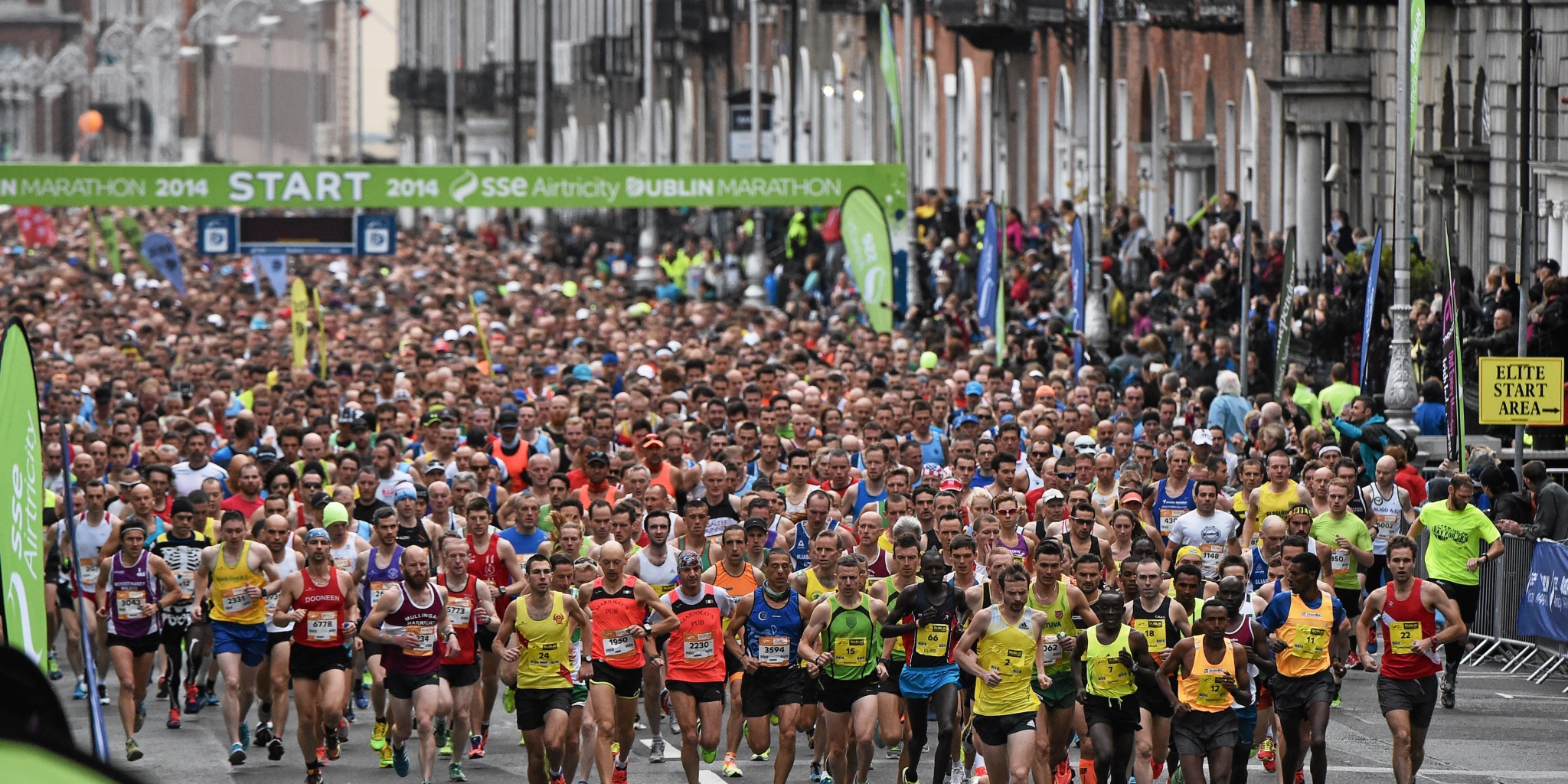 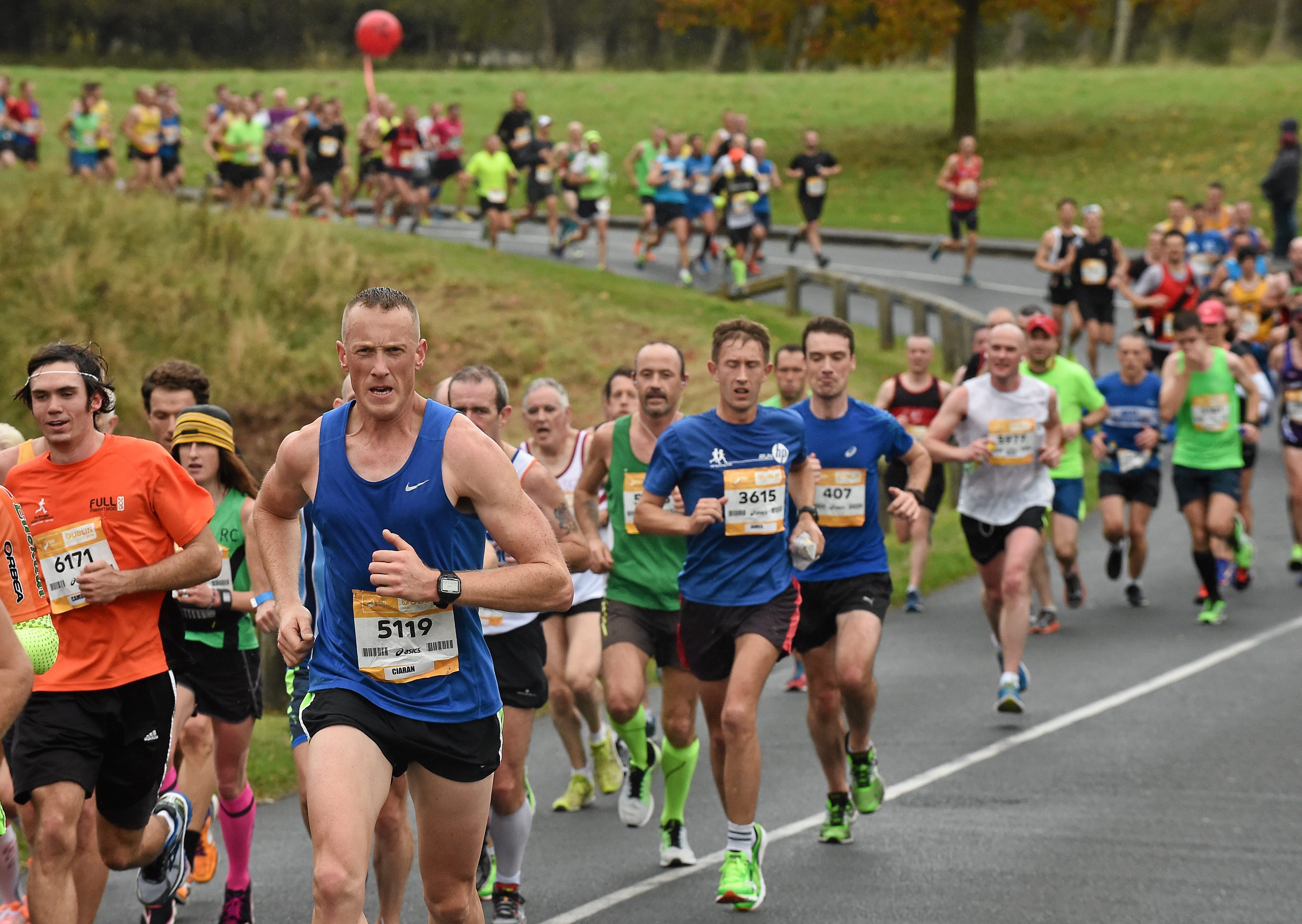 The race has come a long way since its birth in 1980. Its birth is due mainly to the vision of Noel Carroll and his ability to persuade the BHAA to take on his idea. The first race had a total of 1,420 finishers from an entry of 2,100. The first winner was Dick Hooper in a time of 2:16:14 , Dick as went on to be the only person to win the race three times. The ladies were lead home by Carey May who ran a word class 2:42:11, she was the first of 40 lady finishers in the inaugural event. Second man home in 1980 was Neil Cusack who was to return in 1981 to post a winning time of 2:13:59 just 20 slower than his Boston win in ’74.

In 1982, which coincided with the running boom of the early 80’s had an entry of 11,076 that remains our highest entry. 1982 is in the history books for another reason, in that race was won by Jerry Kiernan in a time that still has not been surpassed in Dublin when he ran 2:13:45. 1983 with 8,688 finishers and 1884 with 7,365 finishers produced the first of our foreign men’s winners in Ronnie Agten and Sven Kristensen.

In 1988 we celebrated Dublin’s Millennium with an entry again of 8,700. John Griffen recorded the first of his two successive victories.

1989 was a very difficult year for the Dublin Marathon as the race was run without a tile sponsor for the first time and the City owes great credit to Marion Kavanagh, Alex Sweeney and Bill Kennedy for holding it all together that year. Just over 3,000 runners finished in 1989. Liz Bullen (twin sister of John Treacy) finished 2 minutes down on the afoor mentioned Moria O’Neill.

CDL came on board in 1990 as the saw it as a very good vehicle to promote the smoke less fuel to help rid the city of the smog that struck us in the late 80’s. This year also saw a local Dubliner win the men’s event when John Bolger crossed the line in 2:17:17. In the women’s Christine Kennedy won the first of her back to back titles when winning in 2:41:27, a time she was to lower a year later to 2:35:56.

1991 saw the race double as the Olympic trail for Barcelona and it saw the men’s title go north for the for the first time when Tommy Hughes beat off Jerry Kiernan and John Griffen to the tape. It would be great to see the race double as the national championship’s each year, an idea I think would go down very well with all club runners. Finishers now totalled 2,751.

The 13th running of the event in 1992 was luckey for our winners Jerry Kiernan and Karen Cornwall but it also stands as the lowest finishing field bar 1980 when 2,414 were recorded to have finished.

Moving on to 1993 saw a new sponsor in Golden Pages take over. Our Olympic Silver medals, John Treacy lead a home double with Cathy Shum as they finished in front of 2,617 others. Cathy also took the honours in the last year of Golden Pages sponsorship when winning again in 1996.

Since 1997 we had a new sponsor with the association of 98fm.

In 1996 we made a decision to promote the event outside Ireland and decided to travel to the USA. We targeted the major charities that fundraise for diverse causes. It produced almost instant success as the entries from the charities came flooding in and by 1998 we had an entry of 5,751. 1999 saw a further increase of 3.6% in all entries but the interesting point now was that the female entries in Dublin had grown to such an extent that we now have over 39% of the entries coming from the fairer sex. No other Marathon outside the US has such a high % female entry.

1999 also saw our ladies course record drop to 2:34:24 when Ester Kiplagat had almost 6 minutes to spare over Carol Galea of Malta.

Last year another of our Olympic silver medallists, Sonia O’Sullivan, won in Dublin. In 2000 our entries rose by 44% on the total for 1999 to a high of 8,900. The Canada and US accounted for 3,579 (43%) of the total entries this included circa 600 entries from the Us that were not with any charity. By now we have entries coming in from over 40 countries which is a large increase from 28 in 1997.

2001 saw a new chapter in the live of the marathon being opened as the Dublin Marathon joins an elite band of marathons by being part of the adidas marathon series for 2001.

This sponsorship confirmed Dublin as one of the major Marathons world-wide. As we start 2001 Dublin is ahead of a number of high profile European City Marathons and closing on Rotterdam and Madrid in terms of numbers. Europe continues to be lead by London, Paris and Berlin. Dublin in fact leads all other marathons in Europe with the number of foreign competitors taking part.

2002 saw Frederick Cherono became the sixth Kenyan winner of the race when he finished strongly to take the title in a time of 2:14:25. Lidia Vassilevskaia from Russia led from the start to smash the three year old course record by two minutes, winning in 2:32:58.

Ruth Kutol, made the headlines in 2003 with a new women’s course record. The 30-year-old Kutol knocked over five minutes from the previous best when finishing 14th overall in 2:27:22.

In 2004 a near-record entry, an ideal, sun shine filled autumn day and a record in the men’s race made it a happy 25th anniversary for the Dublin Marathon. Lezan Kimutai of Kenya finally bettering Jerry Kiernan’s 1982 race record by 37 seconds.

African dominance was broken in 2005 with both titles going to Eastern Europe. Dmytro Osadchy of the Ukraine was just six seconds outside the race record as he crossed the line in a time of 2:13:14.

The trend which started in 2005 was maintained, with both winners hailing from the former Soviet Union. Russian Aleksey Sokolov won the men’s race in a new course record of 2:11:39 – the first time a sub-2:12 has been achieved in Dublin – while Alina Ivanova from Russia became the third woman to break 2:30 by winning in 2:29:49.

In 2007 the marathon attained a world-class status as Aleksey Sokolov set a course record of 2:09:07, a time that could have been even faster if the Russian had been pushed over the closing stages. As it was, the 27-year-old army sergeant from St Petersburg won his second Dublin title by a margin of a minute-and-a-half from Thomas Abyu, who set a personal best of 2:10:37.

Lifestyle Sports and adidas signed up as joint title sponsors in 2008, and it saw a record entry of over 11,300 taking to the streets. Another record entry in 2009 with the 12,000 mark passed for the 30th anniversary. Feyisa Lilesa became the first Ethiopian to triumph in Dublin, winning in the second fastest time of 2:09:12. Kateryna Stetsenko from the Ukraine won a competitive women’s race in 2:32:45.

The last number of years have shown that the entries can be increased and so our target over the next four years is to grow the home market and continue the work done over the past two decades to restore the Dublin Marathon to one of the nations sporting spectaculars. The introduction of the race series in 2002 has also been a great success, they not only have increased entries to the 13,000 mark now but they also helped boost the Irish entry in the marathon to over 8,000 now.

Dublin may not be the biggest but it has gained a reputation as being the best value Marathon in Europe. Each runner when picking up their race number receives a T-shirt and goodie bags.

The EXPO has improved in quality over the past number of years.

We also have a breakfast run on the Sunday morning that has grown from a field of 150 five years ago to an entry of over 1,200 last year. After the run our International friend’s receive a second T-Shirt followed by Breakfast to the backdrop of Irish music.

Dublin City too is a big winner as we expect the large entry to exceed last years spend of 7.86 Million and to reach a new high of over 10 Million this year or next.

The route for the Marathon over the last number of years has remained the same with only small changes to the start and finish areas.

The prize fund is extended further last year and will have a top prize of 15,000 EURO for the Woman’s and Men’s winners. To help encourage some more Irish winners we are extending the bonuses to the home grow runner, while also extending the time bonus’s that we introduced in 2004 for the first time.

The Dublin Marathon is also a member of the Association for International Marathons (AIMS). AIMS gives us profile in all major affiliated marathons world-wide. This will extend our reach well beyond the 9 marathon visits we are undertaking this year which include Turin, London, Paris, Rotterdam, Boston, L.A., Chicago, Berlin, Barcelona, Warsaw, Prague and New York.

Is a single lap, starting and finishing close to the City Centre. Conditions for marathon running are ideal.

The Irish climate is influenced by the prevailing light South Westerly winds of the Gulf Stream. The average temperatures for October are around 12 – 14°C (53 – 57°F). Dublin has only about 30 inches of rain annually–ideal for running.