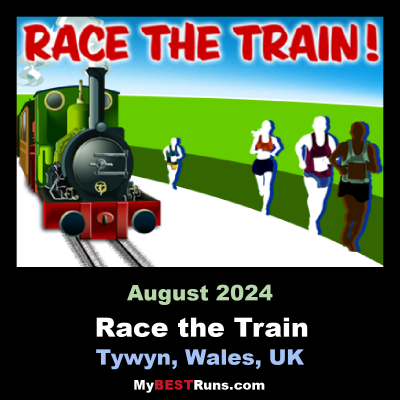 Race the Train is an annual cross country running event that takes place in Tywyn, Mid Wales. The race isorganized by Tywyn Rotary Club, and attracts runners from all over the world.

In the main event, runners compete to beat a steam train on the preserved Talyllyn Railway over a distance of 14 miles (23 km). The event has featured both in local and national media, including the BBC'sCountry file program.

The event was the idea of local dentist, Godfrey Worsey, and was first run in 1984 with around 48 runners. The following year, this had increased to 250 runners. In 2008, there were 822 runners in the main race; the winner completing the course in just over 1 hour 18 minutes, a course record. 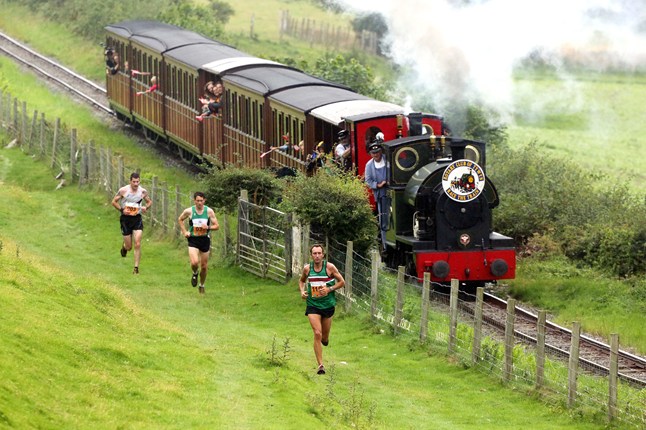 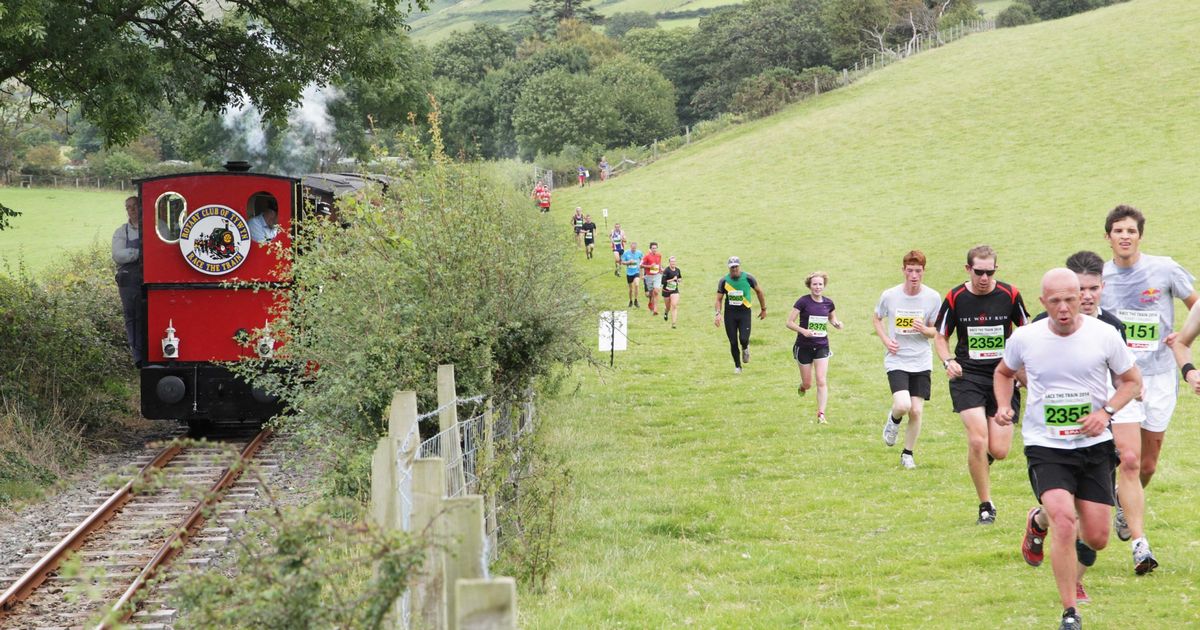 This unique event is a must for all multi - terrain runners. Many competitors return regularly to try and better their performance or just beat that train while others have run nearly every year since the races started. Most serious runners have heard about it either from their friends, TV, or the press so if you haven’t already competed perhaps this year is the time to attempt it. These events also give you the additional challenge of not only racing your fellow competitor’s but also the Train. Having been televised world-wide on several occasions we have attracted many runners from abroad coming from as far away as New Zealand, Australia, America, Hong Kong, Africa etc.

Race the Train takes place alongside as far as practicable the route taken by the Talyllyn Railway on its journey to Abergynolwyn and back. In order to do this all courses use a mixture of public roads, lanes, un-metalled roads, tracks, agricultural land, and rough grazing pastures. The terrain varies all the time and can be very wet & muddy in places, the routes also ascend and descend quite steep terrain and runs on narrow footpaths with little chance of overtaking. Often the Train, or for many runners the track, is just over the fence and in many places if you coincide with the train your family friends, if they are on the train, will be able to shout encouragement to you. A lot of the course is across private land only open for the race so pre & post race inspection of the courses is not possible. All courses are marshalled, well signed, and provided with refreshment / water points along the way. There are members of the Red Cross, Qualified Nursing Staff, & Medical cover over the course. Raynet (Amateur Radio) co-ordinates services should any problems arise. In the afternoon for the main race we normally also have an Ambulance on standby. Remember it is your legal duty to assist any runner with serious problems. You will see that all the races are designated as having approximate distances. This is because we have to alter the course slightly almost every year often in the last few days before the race to accommodate local conditions. These variations are often only slight but invalidate any official measurements of the courses. Usually they tend to balance out and the distance remains virtually the same.

The Talyllyn Railway was the first of the small railways to be rescued by a preservation society, and is now one of the Great Trains of Wales. You can take your family on the train at any time to show them where you have run; or where you propose running. Also if you are visiting at any other time the train runs normally from Easter to late Autumn plus specials over Christmas and the New Year.

All activities are centered on the local school sports ground adjacent to Talyllyn Railway Wharf Station. On race day the route to the field is properly signed, and since we are only a small town impossible to miss. Once on the field you will find registration, changing rooms with showers etc. Other facilities include; refreshments, bar, children's amusements, and various displays by the Police, Fire Service, Coast Guards, Outward Bound, Snowdonia National Park, etc.

As usual we shall have a variety of "Race the Train " merchandise for sale including sweatshirts / T-shirts / vests / mugs etc. some exclusively designed to celebrate this year.

Spectators can enjoy watching the races by traveling on the Race trains, but the capacity is, of course, limited. For the main races we run a second train as soon as legally allowed after the race train and it may be that if you are a slower runner your family / friends would have a better chance of seeing you from this train.

I must stress that the courses are run over private land except for approximately the first and last miles, which are on public roads. Because this land is in use and we run the races with the permission and co-operation of the farmers who own it.The course must not be used at any other time. failure to comply with this request could result in cancellation of future events. It is also for this reason that we do not publish in advance a map of the course, but you will find a general one displayed in the information tent and in the program.

Since the route is quite hilly in some places you are advised to consider bringing adequate footwear especially if weather conditions produce a wet and slippery course (fell running shoes would be considered appropriate).