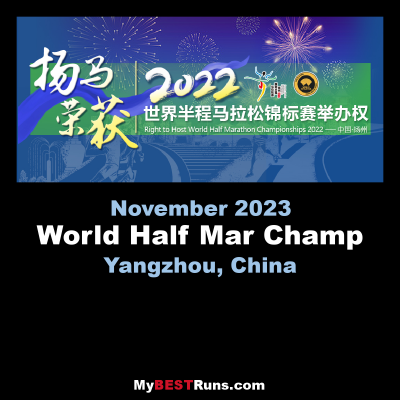 The Chinese city of Yangzhou will host the 2022 World Athletics Half Marathon Championships.

Yangzhou, a city of 4.5 million people, stages an annual Gold Label half marathon. The course records of 59:52 and 1:07:21, set by Mosinet Geremew in 2015 and Peres Jepchirchir in 2016 respectively, are the fastest times ever recorded in China. 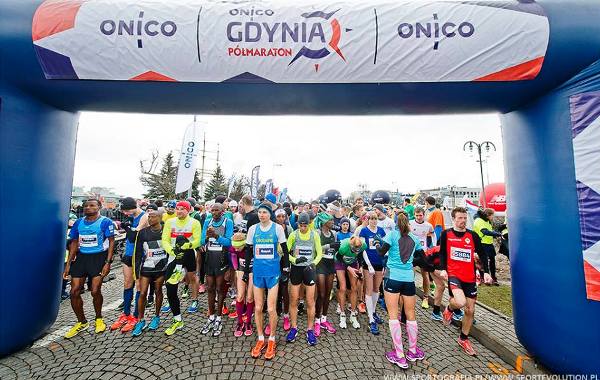 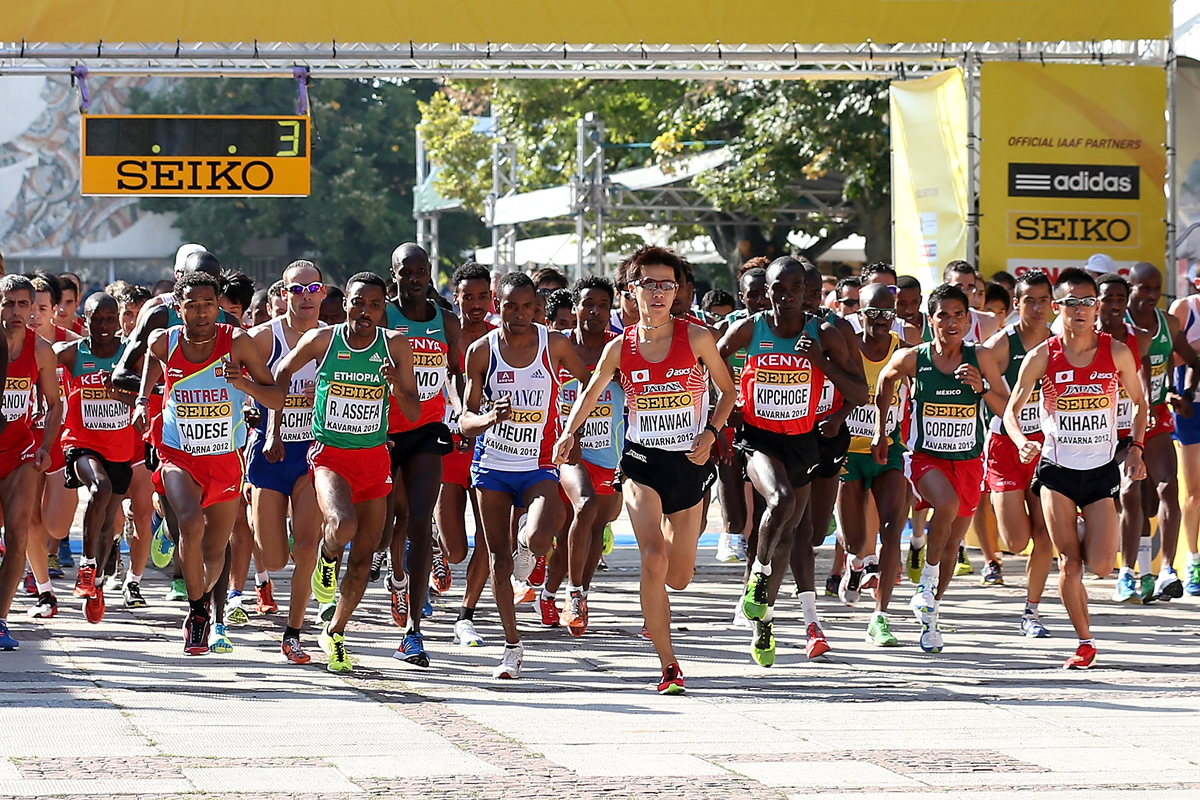 2018 Women’s Race: The women-only half marathon world record * was improved to 1:06:11 at the IAAF/Trinidad Alfonso World Half Marathon Championships Valencia 2018 but it wasn’t acquired by race favourite Joyciline Jepkosgei, who owns the mixed-race standard of 1:04:51, but by slightly surprising Ethiopia’s Netsanet Gudeta.

Gudeta – with the name Kebede on her bib in reference to her extended family name but who appears in vast majority of race results and is better known by solely her father’s name – made a decisive bid for glory in the 14th kilometre to shake off both Jepkosgei and her little-known Kenyan compatriot Pauline Kamulu and was never headed over the final third of the race.

She reduced Lornah Kiplagat’s world and championship record, which had stood since the 2007 edition, by 14 seconds – as well as slicing 1:15 off her own personal best set in Delhi last November – and fittingly, after being slumped for a time beside the barriers beyond the finish line while she regained her composure, was helped to her feet and congratulated by the Dutch woman whose records she had just superseded.

Records looked likely from the moment the gun went.

A 13-strong group consisting of the three Kenyan runners on the final entry list and all five of the Ethiopia and Bahrain women’s squads flew through the first 3km in 9:20.

Admittedly, the opening kilometres saw the runners have gusting winds on their back, but the predicted finishing time was well inside 66 minutes and stayed that way for the next two kilometres despite a slight easing off of the pace before 5km was passed in 15:39.

The Kenyan trio of Ruth Chepngetich, Jepkosgei and Kamulu were forcing the pace with the other 10 women wisely using them as wind breaks.

Working together, but now running into the wind, between seven and eight kilometres Jepkosgei, and Kamulu started to surge in familiar fashion to the way that Kenyan runners have so often done at major championship races in the past and only Gudeta, fellow Ethiopian Meseret Belete and Bahrain’s Asian record holder Eunice Chumba could stay with them.

Passing 10km in 31:38, with Belete clearly starting to struggle and an 11-second gap back to a third Ethiopian Zeineba Yimer, the definite impression that the medallists were going to come from the leading quartet was getting stronger with every stride, and so it proved.

Even though the leaders had drifted outside the pace to beat Kiplagat’s marks, who had passed 10km in 31:10 in the Italian city of Udine 11 years ago, they were still operating at a high tempo.

Over the next couple of kilometres, Gudeta showed more regularly at the front to demonstrate to everyone that she was still fresh and then she made her move. Having passed 13 kilometres and crossing to the south side of the famed Turia Gardens, she went through the gears to test the mettle of her remaining rivals.

Initially, it was the unheralded Kamulu who gave chase but she could not stay with Gudeta for long.

Passing 15km in 47:30, with Kamulu four seconds in arrears and Jepkosgei a further four seconds down the road, Gudeta looked supremely relaxed as some gentle rain started to fall and she consistently and constantly turned the screw.

Gudeta passed 18km in an unofficial 56:45 to bring the world and championship record back into focus, and then speeded up to go through 20km in 1:02:53, now a full 40 seconds clear of Kamulu.

As she turned the corner into the long finishing straight alongside the august Valencia landmark of the Museu de les Ciències Príncipe Felipe, the clock had not yet reached 66 minutes and so Gudeta dug deep and started to sprint over the final 150 metres before going into new territory and taking the US$50,000 world record bonus.

“The race went according to plan, I was only thinking about the gold medal,” reflected Gudeta, sixth and fourth at the last two IAAF World half Marathon Championships, speaking through a translator.

Gudeta later confirmed that it was part of her pre-race plans to let the Kenyans take the pace through the first half of the race and that her training had been geared towards sustaining a fast pace all the way to the finish.

Behind the winner, there was drama as Jepkosgei found her second wind over the last three kilometres.

2018 Men’s Race: Unlike in the women’s race, the record books were not revised by the men at the IAAF/Trinidad Alfonso World Half Marathon Championships Valencia 2018 but that didn’t mean there was an absence of thrills and drama as Kenya’s Geoffrey Kamworor romped away over the final six kilometres to secure his third successive world title over the distance.

A sluggish early pace as the wind started to pick up contributed to Kamworor not breaking the hour and having to be content with a finishing time of 1:00:02 – although the winner’s cheque of US$30,000 will no doubt assuage any disappointment – but what will be remembered is the way that the Kenyan threw in a 13:01 split between 15 and 20km to rip apart a very classy field.

The first 5km were passed in a relatively leisurely 14:31 with Japan’s Kenta Murayama and Spain’s Ayad Lamdassem being the most prominent faces at the front of a huge pack of almost 70 runners.

Little changed at the sharp end over the next five kilometres and with almost all of this part of the course being run into the wind it was no surprise that the pace slowed to 29:28 at 10km with around 30 runners still together at the front.

Over the next five kilometres, the buildings around the course and the change of direction afforded the runners some protection from the elements – with rain also starting to fall – as Kamworor started to feature more prominently at the head of the race.

JOSTLING FOR POSITION
A number of the other expected main protagonists such as Ethiopia’s Jemal Yimer and Kenya’s Leonard Barsoton were also noticeably moving to the fore to cover any attacks while other highly-regarded runners like Eritrea’s Aron Kifle and Switzerland’s Julien Wanders were making sure they were able to see what was happening in front of them.

Kamworor was at the head of the pack as 15km was passed in 44:13, and it became clear that the one-hour barrier was unlikely to be breached.

For the next two kilometres Kamworor slowly wound up the pace and then it happened; just before the 17km checkpoint he threw a brutal burst of acceleration and produced a sustained surge over the next kilometre so that everyone behind him metaphorically, and probably mentally to a certain extent, wilted.

His loping but effective stride, somewhat reminiscent to those with long memories of his compatriot and five-time world cross country champion John Ngugi, took him well clear of the field.

Behind him, Bahrain’s Abraham Cheroben – easily identifiable because of his upright stature with his chest puffed out and head slightly cocked to once side – was working hard and moving through to second place.

The Baharini runner briefly closed the gap to around 10 seconds at 19 kilometres on Kamworor, who had looked briefly as though he was blowing hard although that might not have been too much of a surprise considering his split, before the latter surged again.

Kamworor passed 20km in 57:14, 14 seconds clear of Valencia Half Marathon course record holder Cheroben, and then pulled further away over the final kilometre.

A MOMENT TO CHERISH
With 200 metres to go it looked as though Kamworor would actually go under one hour but he then decided to enjoy his moment in the spotlight as he continued his streak of taking a world title in the sport every year since 2014.

Down the finishing straight, his beaming smile stretched broadly across his face and he started blowing kisses to the crowd. The one-hour mark just eluded Kamworor but no one was going to begrudge him his chance to celebrate what had been a tactically perfect race.

Cheroben took the silver medal in 1:00:22, Bahrain’s first individual medal in the history of the championships, as Kifel passed Yimer with 500 metres to go to take the bronze in a personal best of 1:00:31.

However, Yimer was to climb the podium and get a team gold medal hung around as his team mates Getaneh Molla and Betesfa Getahun came home immediately behind him in fifth and sixth and the Ethiopian scoring trio combined for a time of 3:02:14 to leave silver medallist Kenya 24 seconds in arrears.

Like in the women’s bronze medals, Bahrain’s men also took third place in the team competition.

Wanders, who turned just 22 on Tuesday, confirmed his emerging status by coming home as the leading European runner in 1:01:03 for eighth place.

Further down the results, it’s also worth giving what is nowadays termed a shout out to the USA’s Bernard Lagat in 31st place.

The multiple world champion on the track, both indoors and out, didn’t succeed in reducing his recent USA over-40 best of 1:02:00 but at 43 years and 102 days, he produced a memorable performance. No one older than him has ever run faster than his finishing time of 1:02:16.