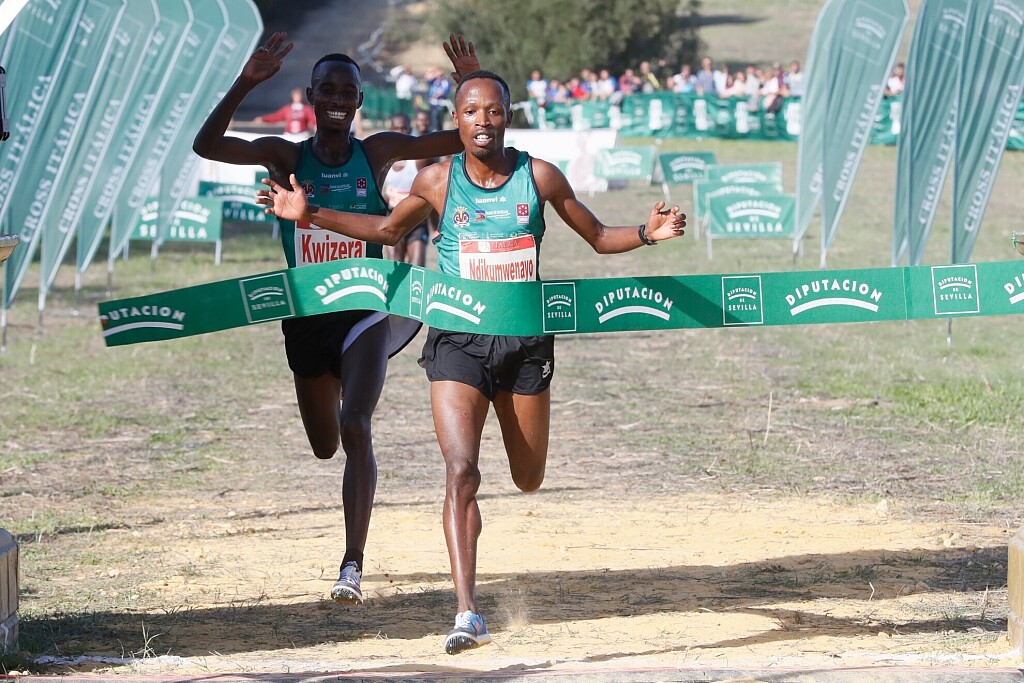 Turkey’s Yasemin Can and Burundi’s Thierry Ndikumwenayo secured respective victories at the Cross Internacional de Itálica on the outskirts of Seville in what was the sixth World Athletics Cross Country Tour Gold meeting of the season, on a sunny and pleasant Sunday (20).

While Can prevailed over Uganda's Peruth Chemutai in a thrilling clash, Ndikumwenayo unleashed a sprint victory over his training partner Rodrigue Kwizera and a star-studded line-up.

The women’s contest was held over the slightly longer distance of 10.1km, but that was no barrier for Olympic steeplechase champion Chemutai, who took control of the race from the start. After just one minute into the race, only Kenya’s Purity Chepkirui and Nancy Jepleting, Yasemin Can and Ethiopia's Meselu Berhe managed to stay close to the 23-year-old Ugandan. Berhe was the first casualty as she began to lose ground before the second kilometer.

While Chemutai made most of the pacing duties at 3:18/km pace, 2021 world U20 1500m champion Chepkirui ran closest to her shoulder with four-time European cross-country champion Can in third and Jepleting in fourth. The first serious move came just before the fourth kilometer when Chemutai's relentless rhythm began to pay off as firstly Jepleting and then Chepkirui began to falter, leaving Can as Chemutai’s only rival. 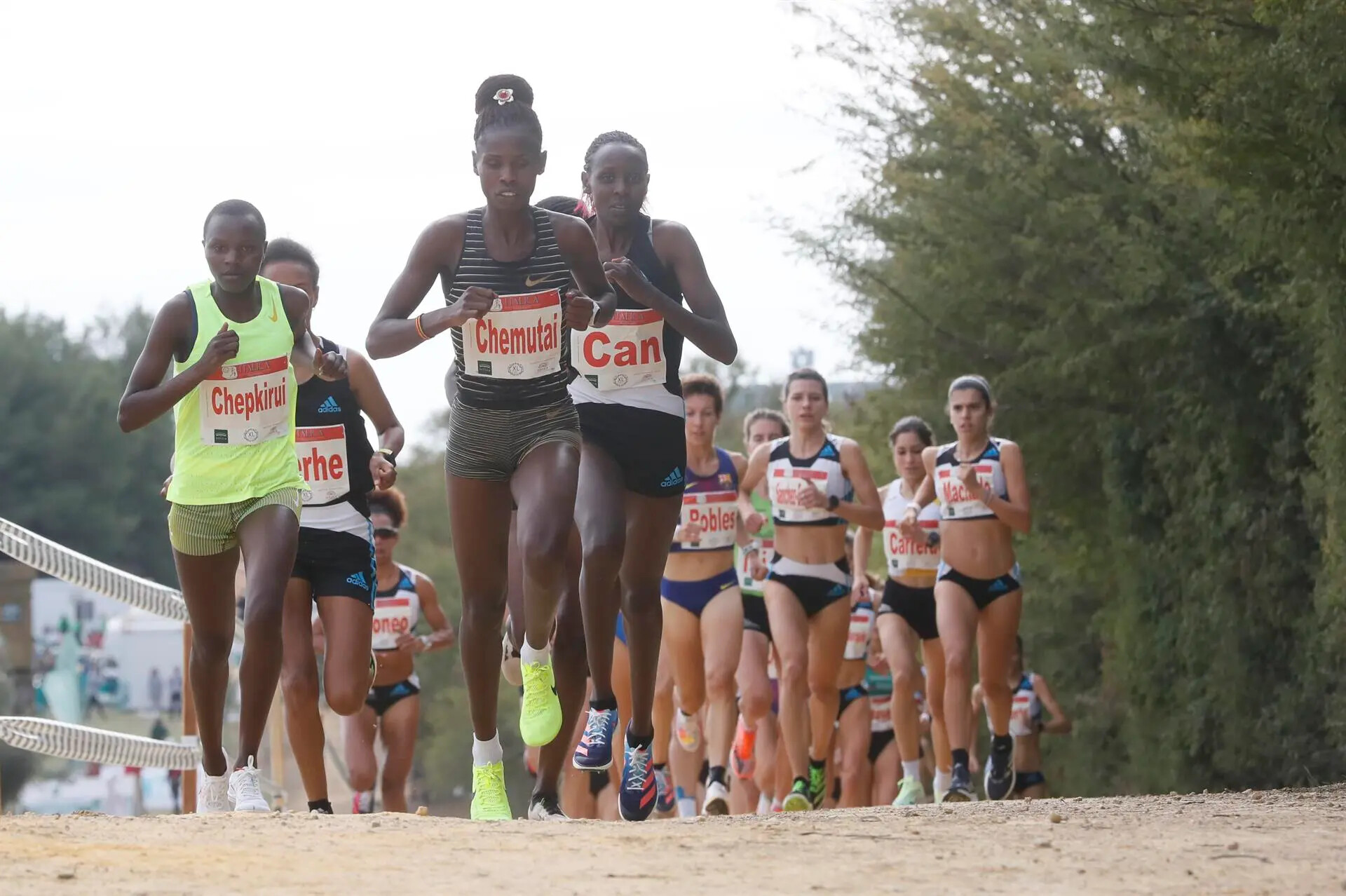 After successive 2.5km loops of 7:56 and 7:54, Can decided to take charge of the race, moving ahead of Chemutai with Chepkirui 14 seconds in arrears. Midway through the penultimate lap, Barreiro injected a brisker pace in pursuit of Jepleting and Berhe.

Can and Chemutai, timed at 8:01 for the penultimate lap, were locked in battle as they set off on the final lap. The Ugandan, who placed fifth at the 2019 World Cross in Aarhus, tried to get rid of Can on an uphill section with 750 meters remaining, but the Turk held off her challenge to regain the lead, launch her attack some 450 meters from home, eventually crossing the finish line unopposed in 32:31 to the Ugandan's 32:34.

More than a minute further back, Chepkirui secured third place while Barreiro displayed the form of her life as she passed Jepleting and Berhe to finish fourth. A fast-finishing García was a creditable fifth as she pipped Berhe in the home straight.

At the finish line, Can expressed her happiness at the win and felt optimistic about her chances at the European Cross Country Championships in Turin on 11 December, the day of her 26th birthday.

The men's race started with Spain's 2017 European cross-country silver medalist Adel Mechaal at the front of the pack. The 32-year-old led a large group with all the main favorites such as Ndikumwenayo, his fellow Burundian Rodrigue Kwizera and the Kenyan pair of Stanley Waithaka and Levy Kibet in close attendance.

With the clock reading 11:00, the in-form Ndikumwenayo moved to the front for the first time to head a group of eight. Ndikumwenayo heated up the pace as the leading group covered the second lap in 7:09 for the opening cicuit's 7:21. By halfway, Spain's world 1500m bronze medalist Mohamed Katir was in second place ahead of Kwizera and Waithaka, but midway through the penultimate circuit Eritrea's Merhawi Mebrahtu took the lead and his frantic pace whittled down the lead group to six men. After another swift lap, which only took 7:04, Kwizera led at the bell with Ndikumwenayo and Katir closest to him.

The Castellón-based Kwizera pushed hard throughout the closing lap, setting a cadence that Katir could not maintain before entering the final kilometer. Shortly afterwards, 19-year-old Mebrahtu lost any chance of a podium place and the race became a double Burundian-Kenyan affair, a duel resolved in favor of the former as Kwizera and Ndikumwenayo managed to build a sizeable margin on the Kenyan pair some 500 meters from home.

The two leaders completed the final lap in a brisk 6:50 before negotiating the tricky final bend. Once again, Ndikumwenayo – who ran a world-leading 7:25:93 for 3000m earlier this year – produced a speedy finish and prevailed over Kwizera, but only just as both were credited with the same time, 28:51. Six seconds back, Kibet took third place after overtaking Waithaka in the closing stages.

“This is my third win a row this cross country season,” said a delighted Ndikumwenayo. “I'm surprised because I only began to train a couple two months ago after the summer break but I feel great both physically and mentally. I'll now stop competing and will do a 25-day training camp in the altitude of Sierra Nevada (3479m). My next event might be a New Year’s Eve race in Spain but it's not confirmed yet.”

The Cross Internacional de Itálica is an annual cross country running competition it will be held on 21st of November in Santiponce, near Seville, Spain. Inaugurated in 1982, the race course is set in the ruins of the ancient Roman city of Italica. As one of only two Spanish competitions to hold IAAF permit meeting status, it is one of...