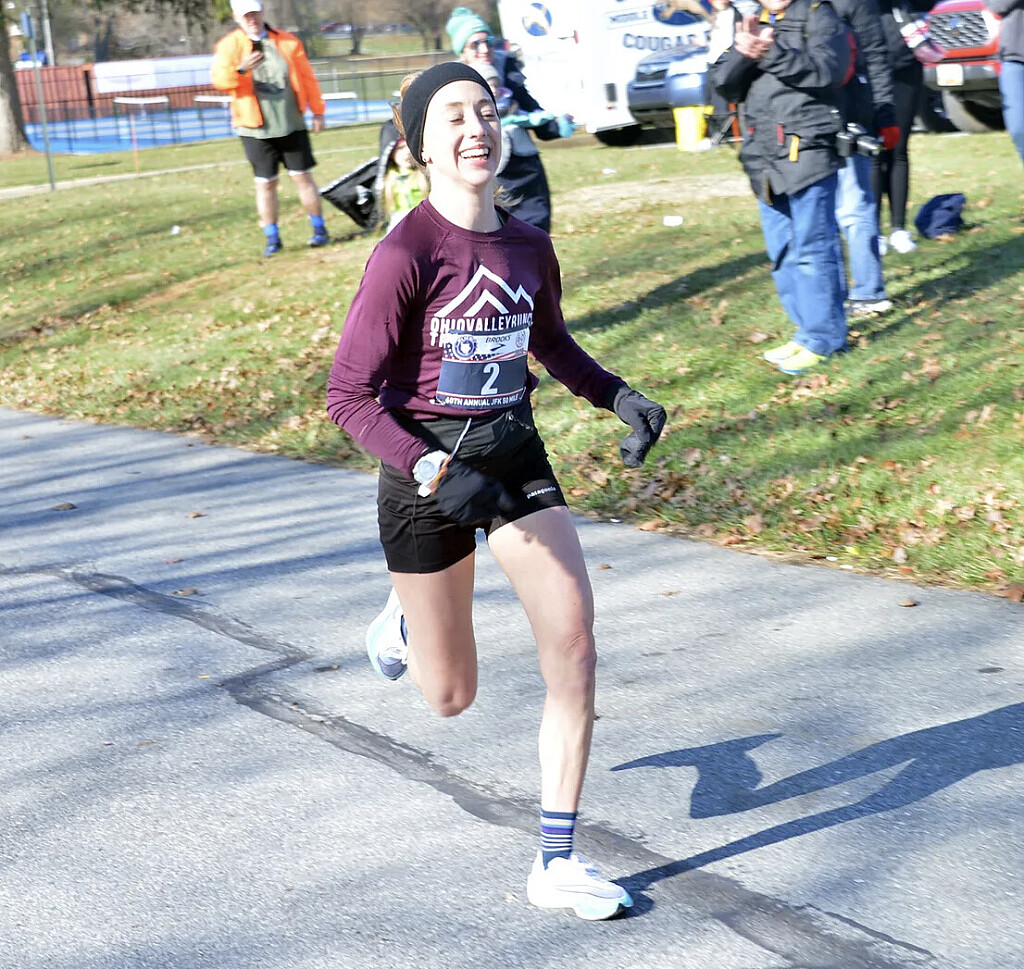 Biehl, 28, of Columbus, Ohio, smashed the women’s race, running away with the victory in a course-record time of 6:05:42 while finishing 11th overall. The previous mark of 6:12:00 was set by ultrarunning legend Ellie Greenwood in 2012.

“Oh my gosh, she was a mile ahead of the record Ellie Greenwood set 10 years ago that nobody had come within five minutes of,” JFK 50 Mile director Mike Spinnler said. “You know, and I hate to do this, gender vs. gender, but it may be the greatest performance in JFK history. 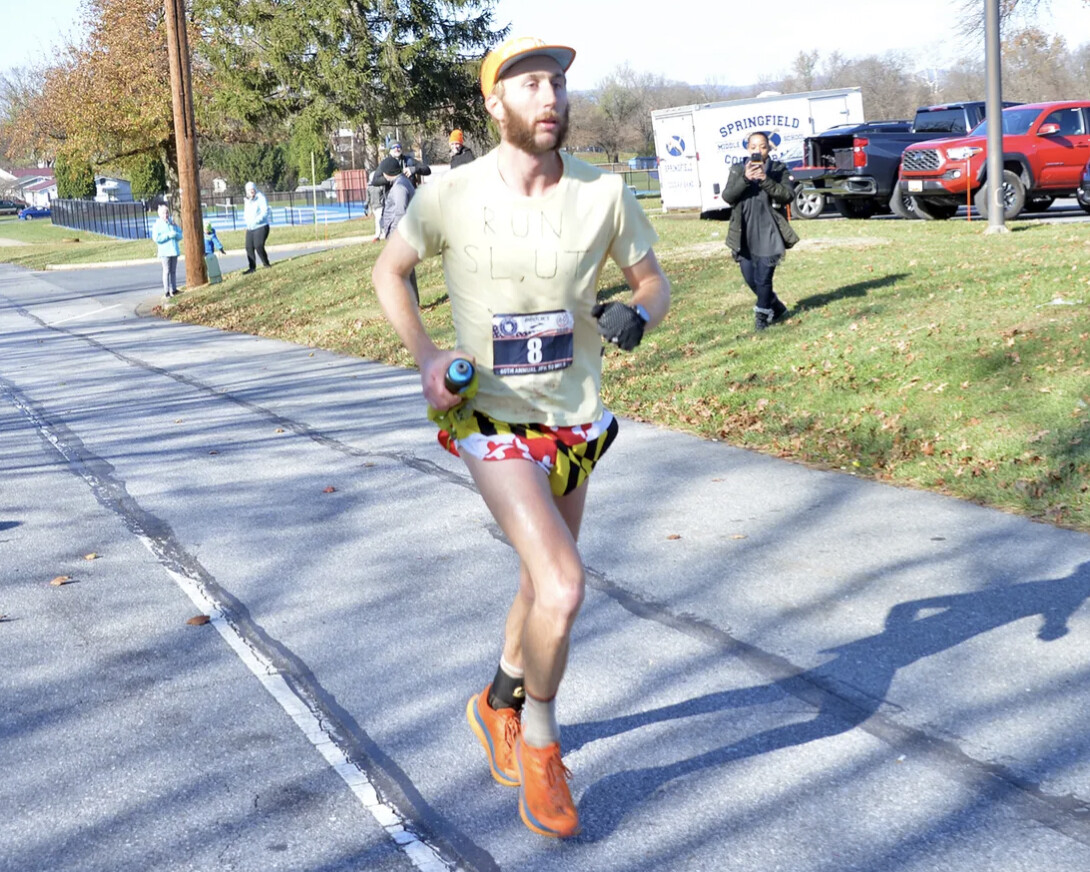 “At the end of the day, I wanted to win,” Biehl said. “Coming here last year and getting second, that was awesome. But after getting second, you have the goal of winning, so that was my main priority. But I also had the course record in mind, too, and the splits and where I needed to be.”

By the time she came off the rocky Appalachian Trail at 15.5 miles, her lead over second place was over 13 minutes. Over the next 26.3 miles on the C&O Canal towpath, the margin increased to more than 19 minutes, and she only continued to add to it over the final 8.4 miles of paved roads to Springfield Middle School. 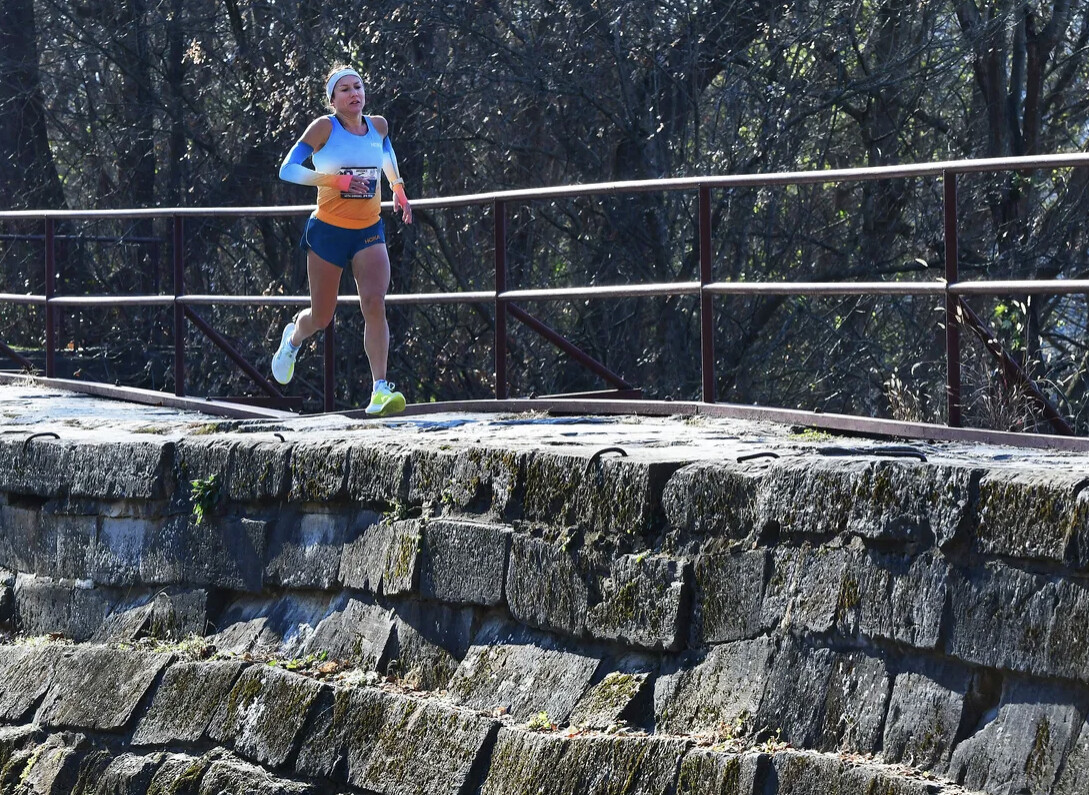 Jennings competed in the marathon at the 2012 London Olympics and was fresh off two big-time ultramarathon efforts, placing first in the European 50K championships last month after taking third at the 100K World Championships in August.

She went into her JFK debut Saturday with the same goal as Biehl’s  — a course-record victory.

“I struggled from the start, pretty much. It just wasn’t my day,” Jennings said. “But fair play to Sarah, she had an absolute stormer. Wow, so impressive, amazing.

“It’s a lovely course. I was hoping I’d enjoy it more,” she added. “For some reason, I just couldn’t settle. It was a harder race than I expected. I’ve had two tough races in the last (few months), but I’m not making excuses. I was beaten fair and square. Maybe I expected too much of myself today. But you win some, you lose some. That’s what sport is. It just makes the good days all the better.”

Corcoran, who used to live in Baltimore, retuned to his former home state with some flair — including running shorts with the Maryland flag design.

Corcoran, who ran a 3:59 mile in college, showed that speed kills at any distance.

“It feels like another life when I ran sub-4:00. I was 19 years old,” he said. “It’s been a fun journey. When I graduated from college, I just about hung up the running shoes, and didn’t really know what I was going to do.

“I moved to Baltimore for work, and kind of realized it was the best way to have a good social life, at least for me, so I joined a running club, the Falls Road Running Club, and I made a lot of good friends. And once the pandemic hit, all the races got canceled, and I started dragging a friend of mine in Baltimore on these really long runs. I had so much fun and really got into the ultra distance.

“The JFK was a good excuse to come back and see some friends.”

Corcoran took the lead on the towpath around Mile 31 and never relinquished it.

“There was an aid station at 30.5, and (Matthew Seidel), who ended up getting fourth, he was just ahead of me,” Corcoran said. “He turned around and saw me not far behind him and walked for a little bit and then started running with me. He was like, ‘Hey, let’s run together, man. Let’s work together.’ And then, like a quarter-mile later, I just kind of floated away from him. I was like, ‘I guess it’s me by myself now. Hope nobody catches me.’”

Makai Clemons, 26, of San Diego, closed hard to take second in 5:32:19, finishing less than 3 minutes behind Corcoran after trailing him by more than 9 minutes at the end of the towpath section at 41.8 miles.

“I’ve been watching his training on Strava, and he’s been throwing down some filthy workouts,” Corcoran said of Clemons. “I was telling him after the race that he was one of the guys that was on my radar.”

“Back in my generation, we always wondered what would happen if a 28-minute 10,000-meter runner or a sub-4-minute miler started doing the trails,” said Spinnler, a two-time JFK champ who lowered the course record to 5:53:05 in 1982.

"And now they’re doing it. The prize money, the national teams, the international competitions, it’s all there — all the incentive that wasn’t there a generation ago is there. All of the sudden, the sub-4-minute milers are coming to the sport. We had two of them in the race today, and we also had two Olymians. It’s so exciting for the future of the sport.”

Canadian Reid Coolsaet, a two-time Olympic marathoner, ran near the front before dropping out on the towpath.