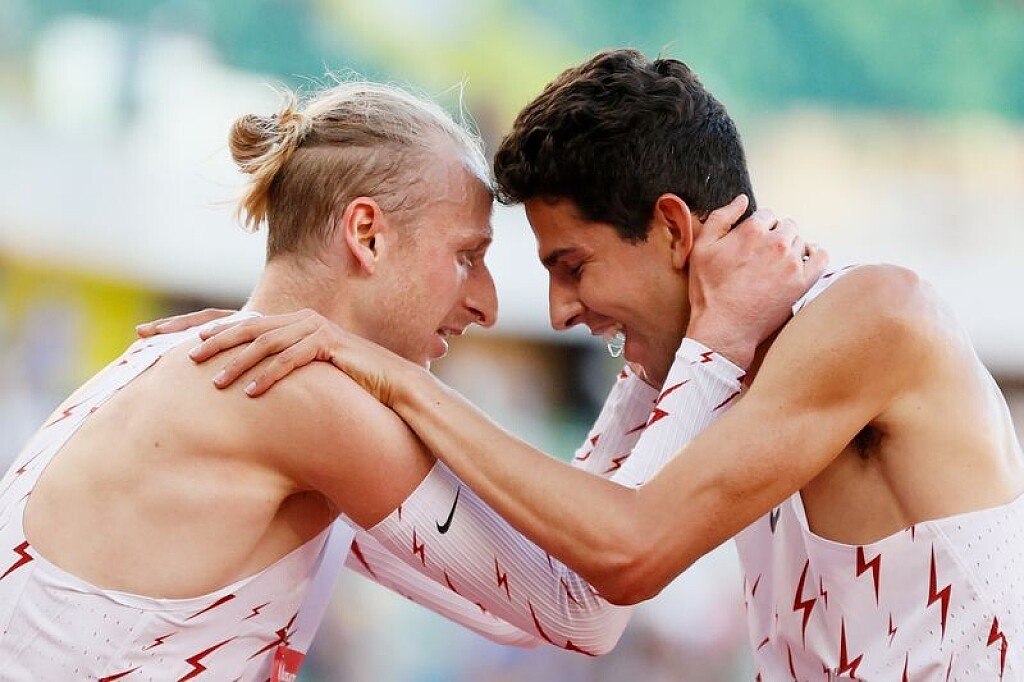 So, Kincaid has something extra riding on the USA Track & Field Outdoor Championships, which begin a four-day run at Hayward Field in Eugene on Thursday. 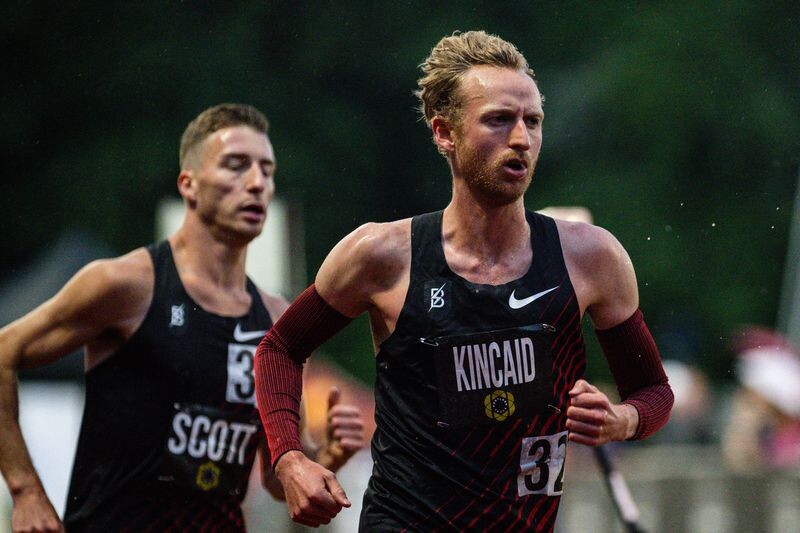 The USATF 10,000-meter final took place at Hayward last month in conjunction with the Prefontaine Classic. Kincaid, the Olympian who trains with the Portland-based Bowerman Track Club, was defending his USATF title.

It was a slow pace and headed toward a kicker’s finish -- Kincaid’s kind race -- when a sharp pain in his side almost doubled him over 6,600 meters in.

Buchanan, who would finish ninth, trains with the California-based Mammoth Track Club. The two UP grads weren’t working together. It just … happened. 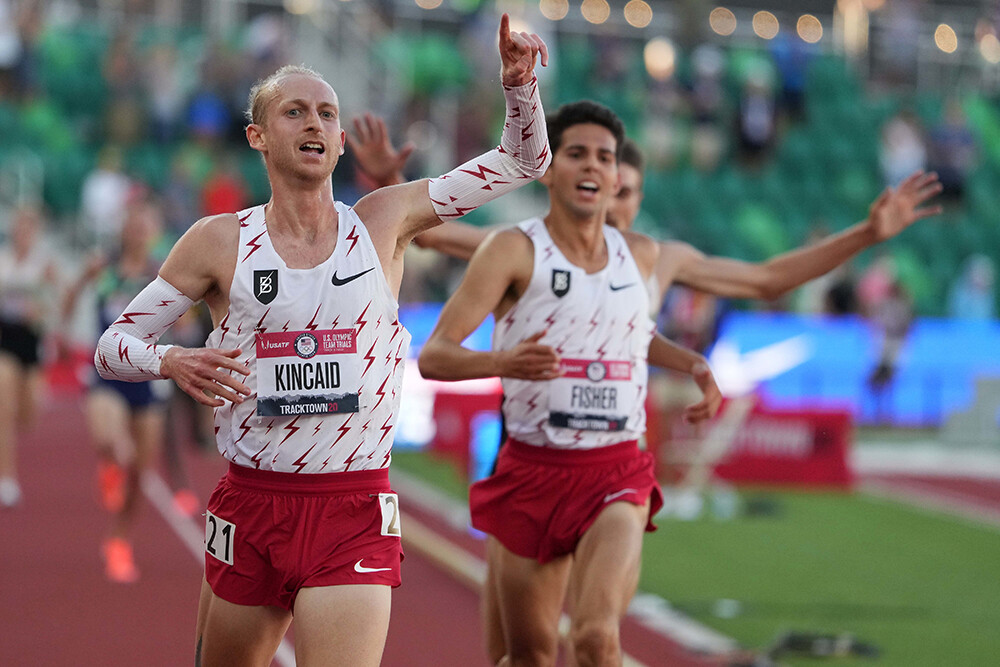 (First photo): Woody Kincaid and Grant Fisher react after finishing first and second place in the men's 10,000 meters during Day 1 of the 2020 U.S. Olympic Track & Field Team Trials at Hayward Field on June 18, 2021, in Eugene, Oregon.

Kincaid remembers thinking, “‘Damn. That’s Reid Buchanan. And this is the Olympic trials.’ It was pretty surreal.”

“A lot of people can’t do that,” says UP coach Rob Conner, who nurtured Kincaid through five up-and-down, injury-troubled years on The Bluff.

Staggered, Kincaid couldn’t go on. He was on the sideline when Joe Klecker, Grant Fisher and Sean McGorty went 1-2-3 to claim the spots on Team USA for the World Outdoor Track & Field Championships next month in Eugene.

“It wasn’t a hard effort,” Kincaid says, trying to make sense of what caused the stitch. “It was a slow pack, 4:52 mile pace. So, it wasn’t like I was hanging on or anything. It’s never happened before.”

Kincaid says it’s been diagnosed as a diaphragm cramp. He has been checked out. There doesn’t seem to be anything wrong medically.

“One of those things,” he says.

And ready to be discarded like yesterday’s news. Kincaid is entered in Sunday’s 5,000 in the main portion of the USATF Outdoor Championships. He will be running to win.

Last year’s Olympic trials was a breakthrough for the former University of Portland star who seemed to spend his first four years as a professional either hurt or trying to come back from injury.

It all clicked last summer on the first day of the trials at Hayward Field when Kincaid positioned himself perfectly in the 10,000 with two laps to go.

He wasn’t quite ready to make his move when former UP teammate Reid Buchanan obliged by going to the front.

It was a Hollywood finish in more ways than one. As Kincaid took his victory lap, his father, Mike, met him at along the rail. Mike was in a fight with mesothelioma that he would lose five months later.

Father and son both knew the score, which made for a poignant moment.

“We were both like in shock, like, ‘Wow, I can’t believe that just happened,’” Kincaid says. “My dad couldn’t speak. We were super close. I don’t think he had anything to say.”

Kincaid’s BTC teammates took a photo of the scene and blew it up to poster size.

“Best race I’ve ever run,” Kincaid says. “That was special.”

Shocking as it might have been to fans, it wasn’t totally unexpected by those close to him.

BTC coach Jerry Schumacher believes Kincaid actually arrived at the 2019 USATF Outdoor Championships, when he survived a wicked pace set by Olympic silver medalist Paul Chelimo in the 5,000, stayed at the front and finished third.

“That got me excited,” Schumacher says.

That September, Kincaid and teammates Lopez Lomong and Matthew Centrowitz ran a 5,000-meter time trial on the Nike campus.

COVID scrubbed most of the 2020 outdoor season, leaving Kincaid something of a question mark heading into last summer’s Olympic trials.

“People kind of missed on him,” Schumacher says. “We got to see him at practice. We got to see how he trained and worked out. He was determined. He had everything you would want to see in an athlete going into the Olympic trials.

“For us, it wasn’t a huge surprise. He’d basically been at that level for two full years, and 2021 was the first time he got to showcase it.”

He is a known commodity now, and an acknowledged threat in the USATF 5,000 final. A totally focused and injury-free Kincaid will be tough to beat, particularly if the race comes down to a kick.