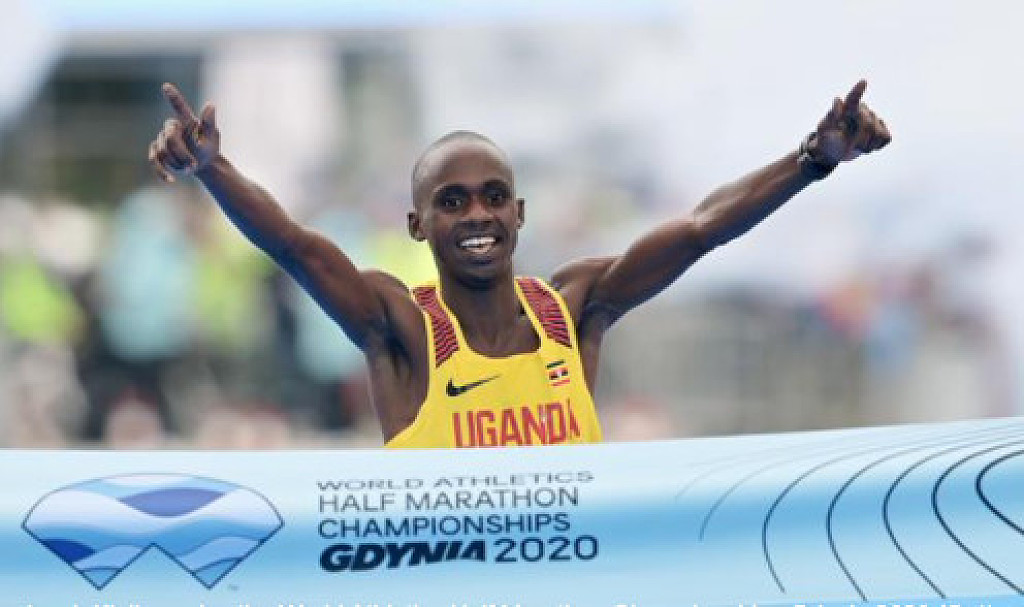 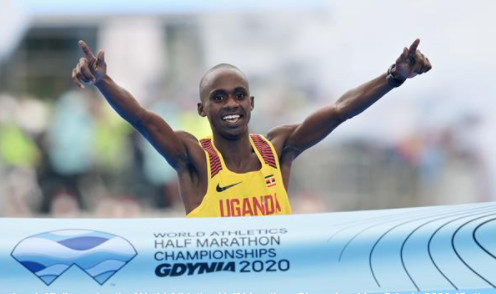 For the first time in the 28-year history of this event, a Ugandan athlete stood proud atop the podium, but it wasn’t the one most expected. In the men’s race at the World Athletics Half Marathon Championships Gdynia 2020 on Saturday (17), it was Jacob Kiplimo and not Joshua Cheptegei who reigned supreme, the 19-year-old coming of age with his first global title at senior level.

With a devastating surge over the last of the four laps, no one could live with Kiplimo and he hit the line a delighted champion in a championship record of 58:49, with Kenya’s Kibiwott Kandie second in 58:54 and Ethiopia’s Amedework Walelegn third in 59:08. 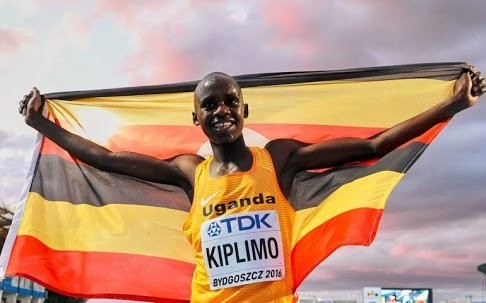 Next in was Cheptegei, who had lost contact with the leaders with a little less than five kilometres to run, the king of the track demoted to fourth place on the roads but rewarded with a swift time of 59:21 on his debut at the distance.

“I couldn’t give more than that,” said Cheptegei, who set a world 10,000m record in Valencia just 10 days ago. “I have been training more for 5000m and 10,000m so I was not well prepared for it, but I’m very happy – running a sub-60 is really special for me. My body was really going very well but I discovered I still had some fatigue in the legs.”

In a race of outstanding quality, the first 10 runners broke 60 minutes, the first time that ever happened at the event and just the second time it has ever happened. This, despite a relatively pedestrian start that saw the leading contenders cruise through the opening lap waiting for one another to make a decisive move.

No Ugandan had ever won an individual medal in 23 previous editions of the event – their one team medal a men’s bronze in 2004 – but the nation has been a rising force in distance running these past few years so today’s result came as no surprise. Kiplimo, after all, had clocked a world-leading 7:26.64 for 3000m in Rome last month and 12:48.63 for 5000m so his credentials were unquestioned, and he had followed Cheptegei home at last year’s World Cross Country Championships.

His only half marathon before today was the 1:01:53 he ran in Kampala last year but from the outset today, he looked most at home at the distance.

In contrast to the women’s race, the men’s race set off at a conservative tempo, the leading contenders happy to coast through the opening 5km in 14:20 as Switzerland’s Julien Wanders towed them along out front.

A leading pack of 23 went through 10km in 28:23, and the gears slowly began to shift in the third lap, with Kandie and Ethiopia’s Guye Adola applying some pressure. Kandie stepped the pace up even more as he clicked through 15km in 42:17 and clocked the first sub-14-minute 5km split of the race with 13:54.

It whittled the leading pack to 11 with a lap to go, with Cheptegei passing the bell a few seconds behind Kandie in eighth place. Kandie was soon joined by Kiplimo as they ran uphill and as he saw the gaps open behind to Cheptegei, Kiplimo kept the pressure on, building a 15-metre lead over his teammate.

Kandie, too, began to fall off pace behind the smooth-striding Kiplimo, but with less than 3km to run he clawed his way back to Kiplimo’s shoulder. The pace now was red-hot, Kiplimo surging to 20km in 55:55, a 13:37 5km split giving him a four-second lead over Kandie as he ran downhill towards the coast for the final time.

Kandie refused to lie down, chasing Kiplimo for all he was worth as they neared the finish in a bid to keep the men’s crown in Kenya for the fourth successive championships, following Geoffrey Kamworor’s three straight wins between 2014 and 2018. But he simply couldn’t close down the advantage and he had to make do with silver.

“I feel great, it was my first time at the World Half Marathon Championships and I won!” said Kiplimo. “It is hard to explain, because I am full of emotion. Unbelievable. The weather was really good, as were the conditions and course. I'm so grateful for everyone who has supported me.”

Kandie led Kenya to gold in the team event, with Leonard Barsoton’s 59:34 and Benard Kimeli’s 59:42 giving them a cumulative time of 2:58:10. Ethiopia took team silver with 2:58:25, and Uganda bronze with 2:58:39. All three teams finished inside the previous championship record.