The half marathon category received the most nominations for this year’s edition of The BibRave 100. Voters cited the OneAmerica 500 Festival Mini-Marathon’s lap around the Indianapolis Motor Speedway as a highlight.

Named one of “America’s Most Iconic Races” by Runners World, the OneAmerica 500 Festival Mini-Marathon is one of the nation’s largest half marathons (for the past 20 years) and annually attracts participants from all 50 states and 15+ countries around the world.

Known as The Greatest Spectacle in Running, the race starts and finishes in downtown Indianapolis and includes a lap around the Indianapolis Motor Speedway, home of the Indy 500. The flat, fast course is packed with thousands of the nicest volunteers you’ll ever meet, 16 course aid stations and nearly 100 course entertainment acts. The OneAmerica 500 Festival Mini-Marathon is the 500 Festival’s largest fundraiser. Race registrations help support the 500 Festival’s free youth programs and events. 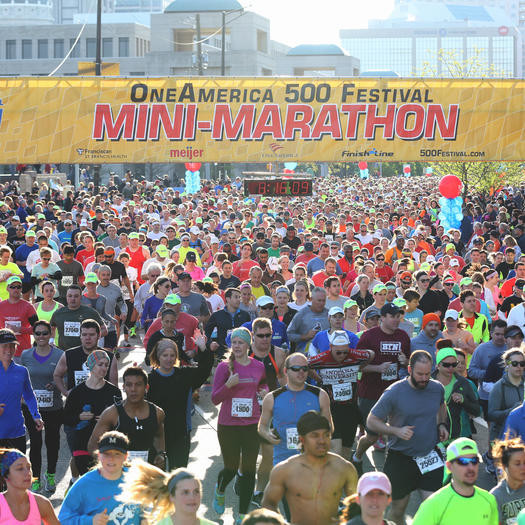 A definitive List of the Best Races in America. The #IndyMini  also earned awards for Exceptional Race Management and Awesome Medals and Bling. In addition, the 500 Festival 5K was listed among the nation’s top 15 5K races.

The 500 Festival was presented with these honors during an awards ceremony held at The Running Event, a conference and retail trade show for the running industry taking place in Austin, Texas.