Allyson Felix is the most decorated woman track and field star in U.S. Olympic history, sprinting to three medals (two golds, one silver) at the 2016 Games in Rio to bring her total Olympic medal count to nine.

Allyson Felix has shared her birth story with ESPN-W. The runner kept her pregnancy a secret for several months, continuing to compete when she was four months pregnant. The baby was due in January 2019, but at a routine checkup late last month, Felix was found to have high blood pressure and the baby’s heartbeat was alarmingly slow. Felix gave birth by C-section on November 28, and though baby Camryn is still in the neonatal intensive care unit, Felix says she is going to be OK. Felix lives in Santa Clarita, California.

Felix describes what a shock it was when everything didn’t go the way she thought it would. And she describes the NICU as being “like this whole other world that you never knew existed of people being fighters and dealing with incredible circumstances and somehow managing.” 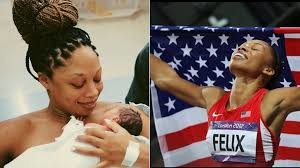 “Every day I sit with my daughter in the NICU and watch her fight. Every day she gets stronger and more beautiful".

“If I come back and I’m just not the same, if I can’t make a fifth Olympic team, I’m gonna know that I fought, that I was determined, and that I gave it my absolute all. And if it doesn’t end up the way I imagined in my head, it’ll be OK. I just have to go for it, because that’s just simply who we are now.”