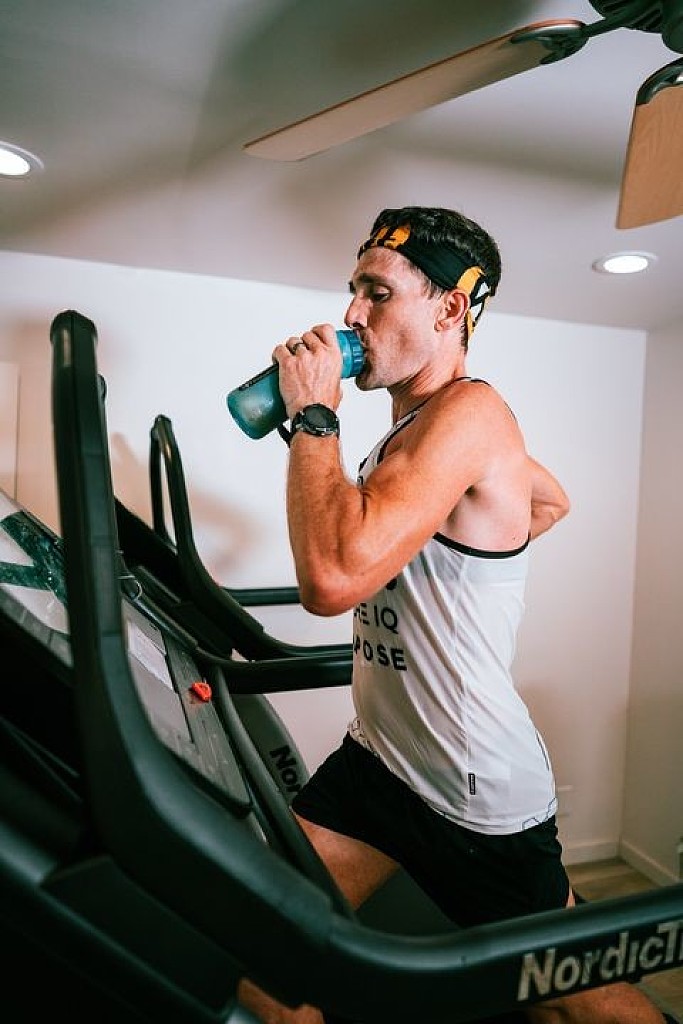 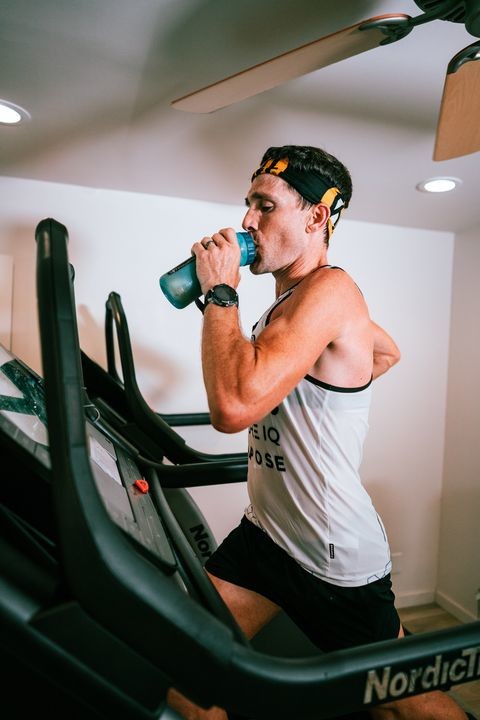 For many runners, running for even 10 minutes on a treadmill feels like torture. But on Saturday, May 16, Zach Bitter spent 12 hours, nine minutes, and 15 seconds on a treadmill. That’s how long the 33-year-old ultrarunner needed to break the 100-mile treadmill world record, averaging a 7:18 per mile pace.

Bitter is no stranger to the distance or that speed. Back in August, he captured the 100-mile world record on an indoor track in Wisconsin, finishing in 11:19:13—nearly an hour faster than he did on Saturday—with an average pace of 6:48. 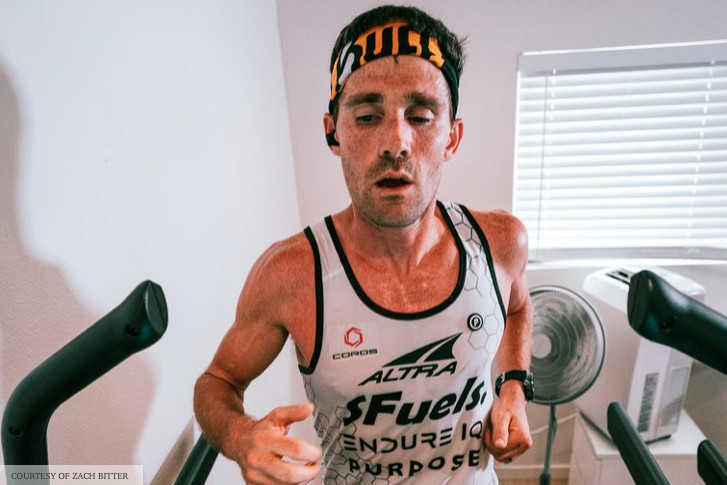 However, though the distances were the same, the approach and execution were completely different this time around.

“The biggest thing was that I needed mental refreshers,” Bitter told Runner’s World. “On the track, I felt anxious if I stopped, like I was wasting time. On the treadmill, it was almost necessary to break, even if I was just switching treadmills.”

Bitter, who had two NordicTrack X22i Incline Trainers treadmills set up in his home for the event, didn’t do many test runs ahead of the event. He did know that the machines would time out after a few hours, so he switched between the two. Also, that gave him a safety net in case one malfunctioned.

He and his wife Nicole, who served as a one-woman crew for him, only ran into two issues. Because they were running the two treadmills, two camera setups, a fan, and an air conditioner in the room, they underestimated how much power was needed. 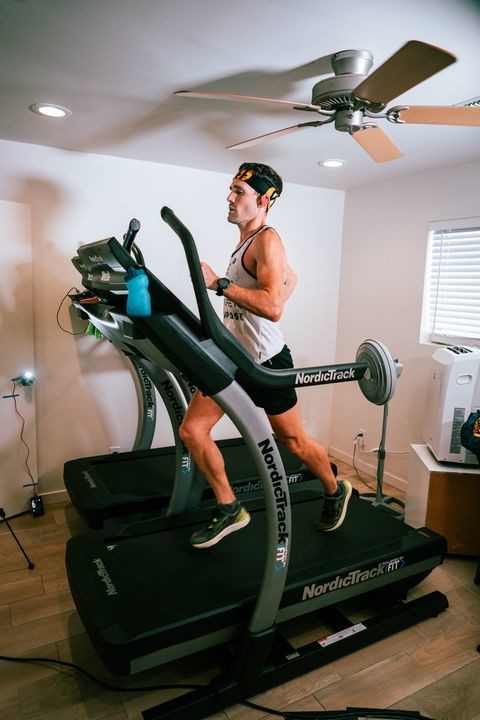 As a result, one of the treadmill’s screens went dark while Bitter was running. The treadmill was still running and counting, but they had to run an extension chord through the house to ease up the power output in the room. Another time, the treadmill briefly stopped counting. Luckily, they noticed and solved the problem.

“We had about four weeks to plan,” he said. “There was plenty of potential for things to go wrong, but luckily, nothing major really happened.”

Overcoming that mental hurdle added an unexpected challenge early on, but a major concern came in the form of under-fueling.

Bitter planned a fueling strategy similar to his strategy during his 100-mile track run last August. But he ran into some problems—the temperature at the indoor track was 60 degrees, a comfortable atmosphere for any run. Despite numerous attempts to mimic that in Bitter’s home with fans and air conditioning, his Phoenix home was more like 70 to 75 degrees throughout the run.

To his surprise, the additional heat wasn’t likely from outside.

“I was talking to Geoff Burns [an ultrarunner and doctoral student in biomechanics] afterward, and he said the one thing I didn’t consider was heat coming from the treadmills,” Bitter said. “Also, since I’m stationary, I’m just swallowing all of my own body heat, because instead of moving like on a track, I’m a little warmer in just a bubble. It was amazing how cool it was even five feet away from it.”

The additional heat meant Bitter was feeling dehydrated in the first couple of hours. Bitter tries to consume only liquid calories when he runs, relying almost entirely on S-Fuel Race+ hydration mix. He was forced to spend the next few hours playing catch-up, consuming electrolyte tabs and boosting his fluid intake to as much as 60 ounces in an hour.

A few hours later, his stomach felt like it was operating normally again.

The early issues were draining, but Bitter still had hours to go on the treadmill. To entertain himself, he would play around with the treadmill paces, typically shooting just above or just below seven-minute pace.

“I just try to keep my mind off the treadmill and the distance,” he said. “If you think too much, you can bite off too much of a chunk at once. It helped to go into a mile at one pace and then switch to another so I could worry about getting through that mile. As the day got longer, I shifted to three or four difference paces within a single mile. Those benchmarks helped me inch closer.”

He also filled his time listening to podcasts, music, and tuning into the live stream to listen to guests like Dean Karnazes, Jamil Coury, and Tim Tollefson talk about his attempt and running in general.

One surprise for fans was the appearance of comedian Bert Kreischer, who Bitter met a few years ago when he appeared on the Joe Rogan podcast for the first time. Kreischer ended up staying on the stream for a couple hours after a seven-mile treadmill run of his own. He spent a lot of time chatting with Courtney Dauwalter, Maggie Guterl, and Sally McRae. All four, along with Bitter’s wife, Nicole, even talked about potentially training Kreischer for a 100-miler himself. It’s still unknown if this will happen, but the trio of female ultrarunners did agree to train him if he did.

Even with the distractions, the time on the treadmill wore on Bitter. At mile 87, he disappeared into the bathroom for two minutes to eat a lunch-box size bag of Boulder Canyon olive oil and sea salt potato chips.

“I just needed a break from being moved by the machine,” he said. “That was the only solid food I ate during it. In the end, I went through 12 packets of S-Fuel, the potato chips, and eight ounces of soda.”

After earning his second 100-mile world record in nine months, Biller, who stayed ahead of the world-record pace the entire day, he did a couple interviews. When that was finally done, he enjoyed two pounds of ground beef topped with melted cheese and sea salt, and a bag of pork grinds before calling it a day.

“Anything salty and savory,” he said.

A few days after, Bitter is feeling a little better. He isn’t planning to do a long run on the treadmill anytime soon, but due to the Phoenix heat, he will likely be back on it soon for some tempo runs.