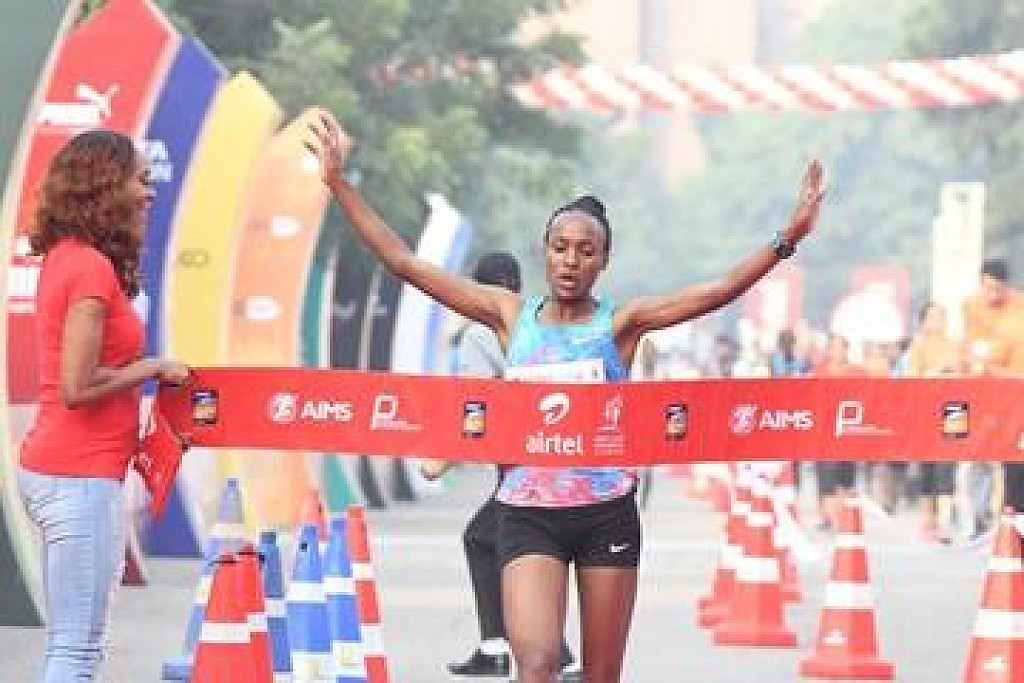 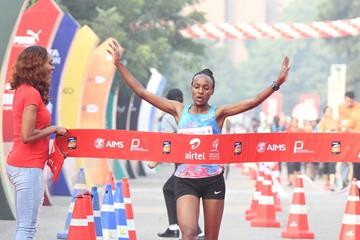 The pre-race publicity for the Airtel Delhi Half Marathon 2018 focused on a duel between Ethiopia’s Tirunesh Dibaba and Kenya’s Joyciline Jepkosgogei, quite rightly considering their careers and 2018 racing records, but Dibaba’s compatriot Tsehay Gemechu hadn’t read the script and flew to a course record of 1:06:50 on Sunday October 21.  Gemechu, running her first half marathon, took four seconds off the nine-year-old previous record for the IAAF Gold Label Road Race, set by Kenya’s Mary Keitany in 2009, to take the $27,000 (US) first prize in one of the  richest half marathon in the world. In a race full of drama and surprises, the 20-year-old Ethiopian outsprinted the world record holder Jepkosgei in the final few hundred metres, the latter taking second place in 1:06:56, with Ethiopia’s Zeineba Yimer running a strong final five kilometres to take third in 1:06:59.  In the men’s race, Andamlak Belihu started the Ethiopian success story in the Indian capital on Sunday with an assured run over the final third of the race, having pushed the pace from just after the halfway point. At 15km, passed in 42:41, four men were together – Belihu and his fellow Ethiopian Amdework Walelegn, Kenya’s Daniel Kipchumba and Eritrea’s Aron Kifle – but soon Belihu pushed again and only Walelegn could follow him. The two 19-year-olds stayed together, although Belihu always looked the more comfortable and confident, until the final 250 metres when the eventual winner turned the screw again and crossed the line in 59:18 with Walelegn finishing four seconds behind him in 59:22. “After finishing second last year, I came here determined to win and I was looking at the course record (59:06 by Ethiopia’s Guye Adola in 2014) but the pacemakers in the first half of the race didn’t do a good job,” said Belihu, despite the fact that the leaders were taken through 10km in 28:01. “As for next year, I’m not going to move up to the marathon just yet. I have the World Cross Country Championships and 10,000m on the track at the world championships next summer as my targets,” he added. Kipchumba and Kifle also broke the hour in Delhi with 59:48 and 59:50 in third and fourth respectively, to emphasise the depth and quality of the race and potential for running quick times on the course. (10/21/2018) ⚡AMP