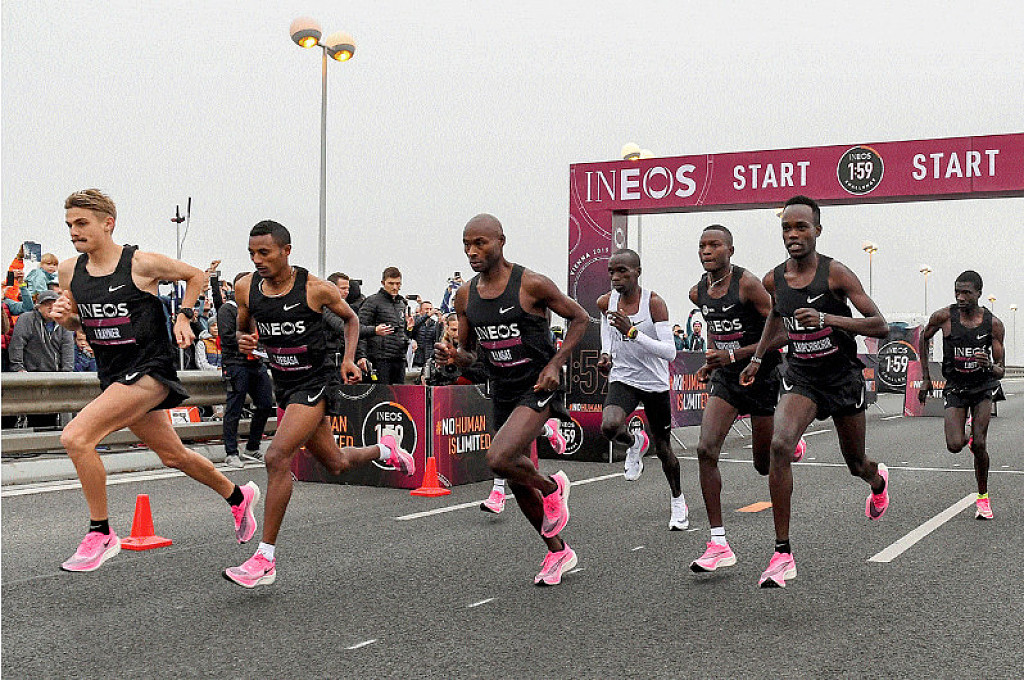 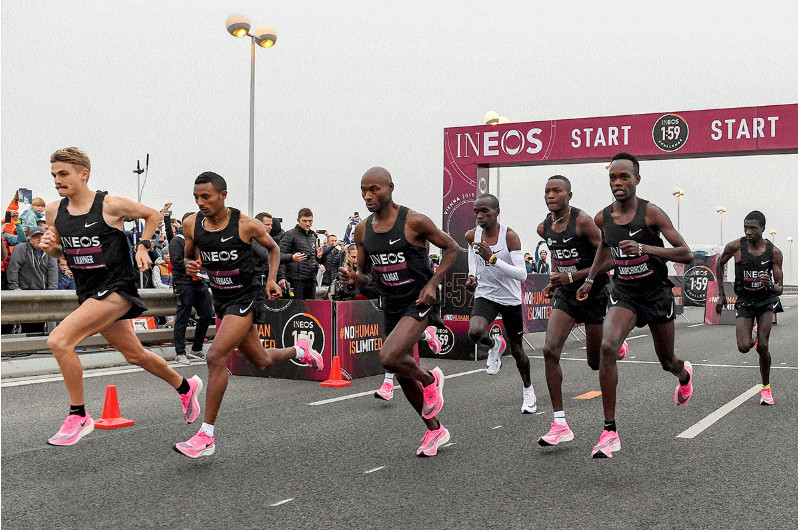 Anyone who saw Eliud Kipchoge of Kenya break the two-hour marathon barrier in October very likely saw something else, too: the thick-soled Nike running shoes on his feet, and, in a blaze of pink, on the feet of the pacers surrounding him.

These kinds of shoes from Nike — which feature carbon plates and springy midsole foam — have become an explosive issue among runners, as professional and amateur racers alike debate whether the shoes save so much energy that they amount to an unfair advantage. 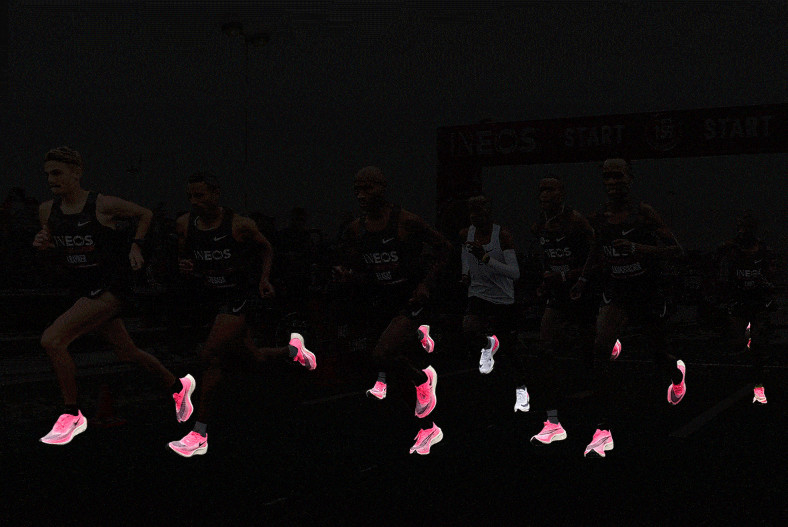 A new analysis by The New York Times, an update of the one conducted last summer, suggests that the advantage these shoes bestow is real — and larger than previously estimated.

At the moment, they appear to be among only a handful of popular shoes that matter at all for race performance, and the gap between them and the next-fastest popular shoe has only widened.

We found that a runner wearing the most popular versions of these shoes available to the public — the Zoom Vaporfly 4% or ZoomX Vaporfly Next% — ran 4 to 5 percent faster than a runner wearing an average shoe, and 2 to 3 percent faster than runners in the next-fastest popular shoe. (There was no meaningful difference between the Vaporfly and Next% shoes when we measured their effects separately. We have combined them in our estimates.)

This difference is not explained by faster runners choosing to wear the shoes, by runners choosing to wear them in easier races or by runners switching to the shoes after running more training miles. In a race between two marathoners of the same ability, a runner wearing these shoes would have a significant advantage over a competitor not wearing them.

The shoes, which retail for $250, confer an advantage on all kinds of runners: men and women, fast runners and slower ones, hobbyists and frequent racers.

Many other brands, including Brooks, Saucony, New Balance, Hoka One One and Asics, have introduced similar shoes to the market or plan to. These shoes may provide the same advantage or an even larger one, but most do not yet appear in sufficient numbers in our data to measure their effectiveness.

What makes these shoes different is, among other things, a carbon-fiber plate in the midsole, which stores and releases energy with each stride and is meant to act as a kind of slingshot, or catapult, to propel runners. The shoes also feature midsole foam that researchers say contributes to increased running economy. 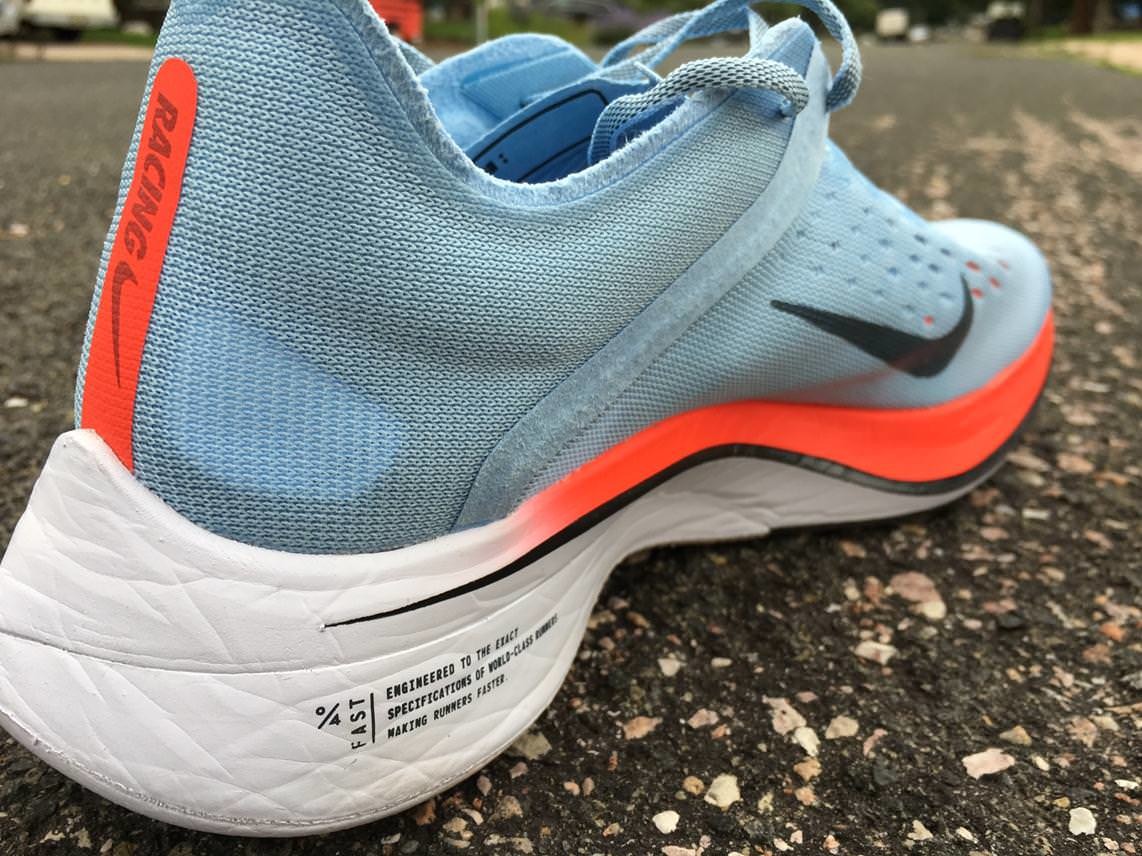 Whether the shoes violate rules from track’s governing body, World Athletics, depends on how one interprets this sentence from its rulebook: “Shoes must not be constructed so as to give athletes any unfair assistance or advantage.” It does not specify what such an advantage might be.

“We need evidence to say that something is wrong with a shoe,” a spokesman for the governing body, then called the I.A.A.F., told The Times last year. “We’ve never had anyone bring some evidence to convince us.”

In an announcement earlier this year, the group said, “It is clear that some forms of technology would provide an athlete with assistance that runs contrary to the values of the sport.” It has since appointed a technical committee to study the shoe question, and to make a report with recommendations. (The report was originally intended to be released to the public by the end of the year; it will now reportedly be released in 2020.)

When we asked Nike last year about whether its shoes might violate I.A.A.F. rules, a spokesman said the shoe “meets all I.A.A.F. product requirements and does not require any special inspection or approval.”

Last Thursday, the company said in a statement, “We respect the I.A.A.F. and the spirit of their rules, and we do not create any running shoes that return more energy than the runner expends.”

There is no such thing as a large-scale randomized control trial for marathons and shoes, but there is Strava, a fitness app that calls itself the social network for athletes. Nearly each weekend, thousands of runners compete in races, record their performance data on satellite watches or smartphones, and upload their race data to the app. This data includes things like a race name, finish time, per-mile splits and overall elevation profile. And about one in four races includes self-reported information about a runner’s shoes.

How we measured the shoes’ effect

[These approaches are essentially identical to the ones The Times used last summer. See that article for more examples and methodological details.]

We measured the shoes’ performance using four different methods — each with its own strengths and flaws:

1. Using statistical models2. Studying groups of runners who ran the same pair of races3. Following runners as they switch shoes4. Measuring the likelihood of a personal record in a pair of shoes

None of these approaches are perfect, but they all point to the same conclusion: Something is happening in races with the Vaporfly and Nike Next% shoes that is not happening with most any other kind of popular shoe.

Besides race times and the names of shoes, we also have data on runners’ gender and approximate age. For some of the more serious runners, we have detailed information about their training volume in the months leading up to a race. We also know about the weather on race day.

No statistical model is perfect, and it’s possible that runners who choose to wear Vaporfly or Next% shoes are somehow different from runners who do not. Regardless of the decisions that went into this model — even when trying to control for runners’ propensity to wear the shoes in the first place — the outputs were similar.

Strava is very popular among runners. At last year’s Berlin Marathon, for example, more than 10,000 runners uploaded race information to Strava, and this year, more than 14,000 did. Crucially for our purposes, about a thousand of those runners ran both races, and a subset of them reported racing in different shoes.

We could then examine the change in performance of two similar runners — people with similar race performances and, ideally, training regimens — and compare the improvement of a runner who switched shoes with a runner who did not. In Berlin, runners who switched to Vaporfly or Next% shoes improved their times more than runners who did not, on average.

For two athletes and a single pair of races, this might not tell us much. But in our data, there are thousands of instances when pairs of runners ran in the same two races.

When we perform this calculation for every pair of races in our data and measure the effect of switching to any kind of popular shoe, we see that runners who switch to these Nike shoes improved significantly more than runners who switched to any other kind of shoe. No other shoe comes close to having the same effect.

Race times are, in many ways, a crude way to measure performance. One marathon may be hilly or full of sharp turns; others may be flat and straight. Weather, too, is important, with higher temperatures typically resulting in slower times. And yet race times are how runners qualify for prestigious races, like the Boston Marathon, and most runners know their personal best times by heart, regardless of whether the race they ran was flat or hilly, on a hot day or a cold one.

We can follow the runners in our data with this measure in mind, testing whether a runner’s fastest time is more likely when he or she switches to any kind of shoe.

Someone can run a personal best for all kinds of reasons unrelated to shoes. A runner may train more, execute a better strategy on race day or run an easier course. Regardless, we found that runners who switched to these shoes were more likely to run their fastest race than runners who switched to any other kind of popular shoe.