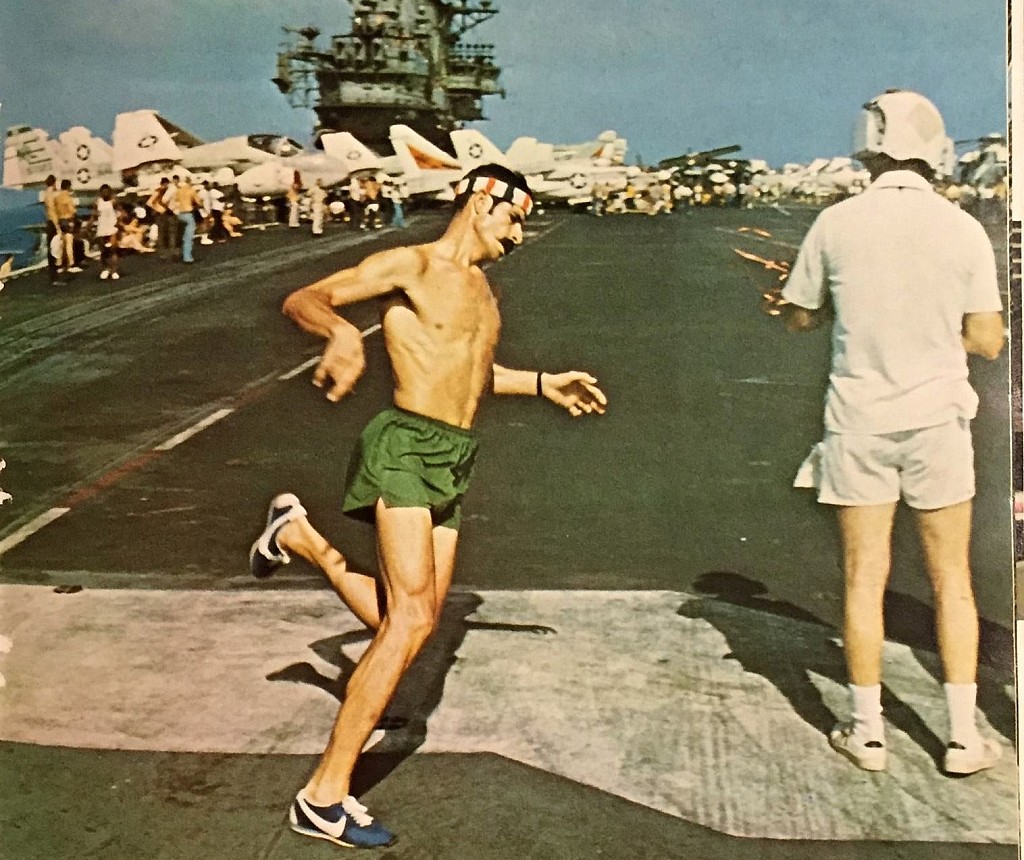 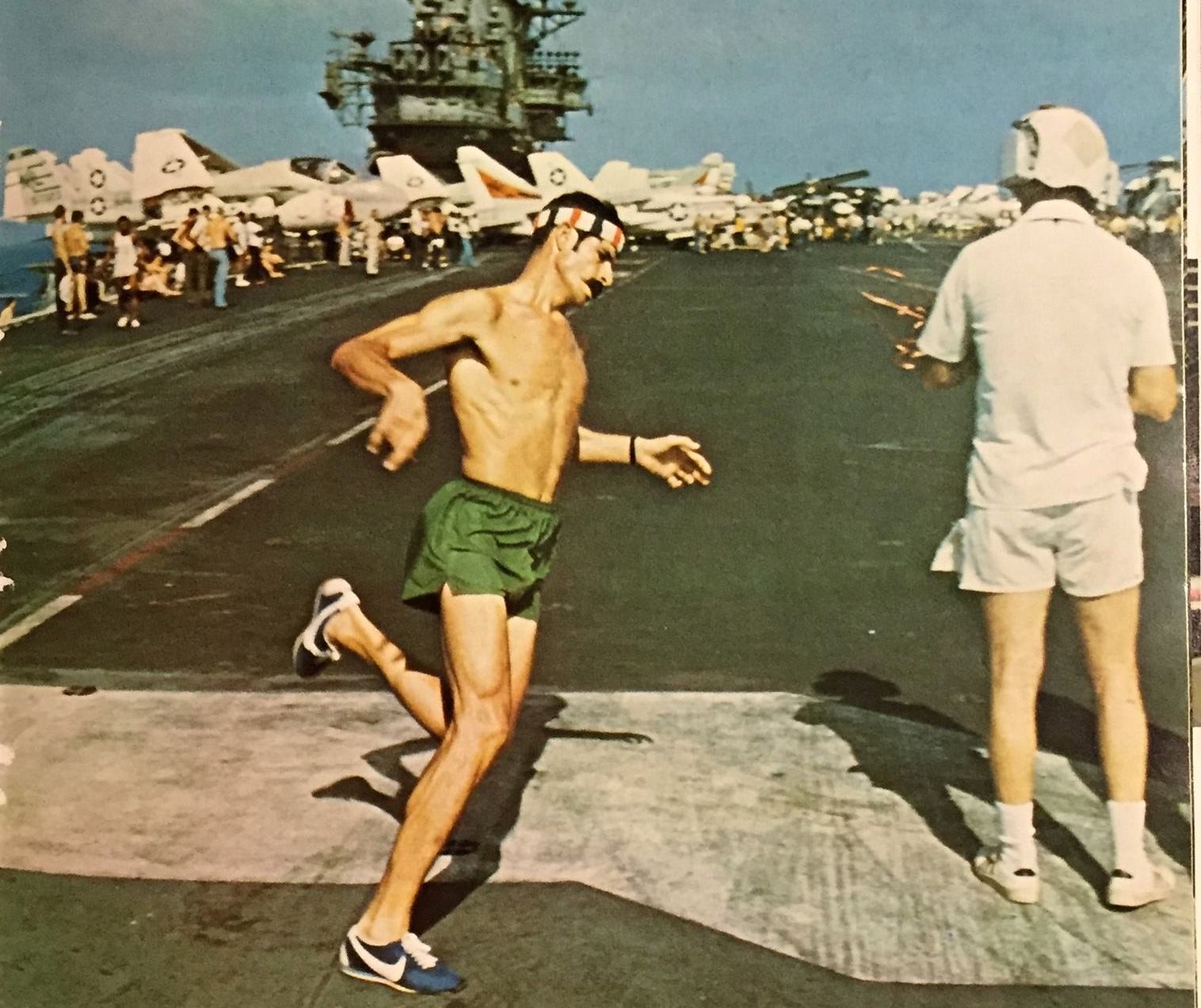 RUN THE WORLD: Phil Camp (70) was a former aviator at the United States Navy.  He now lives in Chula Vista, CA with his wife Judy who is a top master tennis player.  This photo of Phil running a mile in a track meet on the ship the Coral Sea was taken in 1974.  During his running career he has qualified for Olympic Marathon Trials three times starting in 1972.  He has won five marathons including Nike OTC (73) and Marine (79).  He says, "I didn’t get into masters running Stateside until age 45 because I was living in Sicily, then the Philippines my last two tours in the Navy."  As a master runner in 1993 Phil was second overall at the Carlsbad Marathon.  At the Carlsbad 5k he placed first 45-49 in 1993 and 1st 50-55 in 2000.  Phil continued to push as the years went by.  However, just after he turned 60 his ankle started hurting.  "It turned out to be a fallen arch," he says.  "A foot surgeon told me I was done running, but my podiatrist said he could keep me going at fewer miles with newer orthotics."  Another "age challenge" was dealing with his heart health.  "I had experienced coronary artery disease at 58 and got two stents," he says.  "The heart rhythm issue was a complete mystery to me."  He started taking long bike rides and he started wearing a heart rate monitor.  "A cycling friend told me that everyone he knew with similar symptoms had a pacemaker. That night I wore my HR monitor to bed and watched my HR drop to 33-35 bpm.  I drove myself to the ER around midnight and they told me I wouldn’t be leaving without a pacemaker."  It was February 2016, he was 68-years-old, and he got a PM.  "Running has never quite been the same since just before and after the PM. I get very fatigued if I run faster than 8:30 per mile," Phil says.  But he is still gets in his runs but just slower these days.  "I’m excited to be in the Run the World Challenge! I will slow down to whatever pace I have to to contribute my 15-20 mi each week, I’m just so happy to be included with such a large diverse group of runners."  Phil has many running stories to tell and this one is about Bill Rodgers.   "I knew Bill Rodgers was going to be at the Azalea Trail Run and being a local runner at the time I was too.  I took the race out fast for me, 9:36 at the 2 mi. Somewhere before 3 mi, Bill finally caught up. He said he left the line with the pack and wondered who was in the lead. One of the guys said, “that’s Phil Camp!” He said he had read an article in Runner's World several years before and figured he’d better not let me get too far ahead.  We shared the pace for awhile and then he slowly pulled away! Three years later when I was stationed in the Philippines I got a free military flight to Korea and managed to talk my way into the Seoul Marathon. They doubted that I had run a 2:13 but allowed me to enter. The next morning I showed up among maybe 10,000 runners with no idea how to stash my warm ups. Then a bus pulled up near the start line and all the elite runners including Bill stepped out to mingle with the crowd.  I waved at Bill and he told me to jump on the bus. They took us to a locker room with a track nearby for warm up and then back to the start ahead of the masses. Bill said he wasn’t running fast.  He was just there to run with his fiancée and attend the after party. I ended up 10th in a 2:19, my 3rd marathon in two months! Never forgot Bill’s kindness, one of the nicest guys I’ve ever met!" Phil has a lot of good running stories. (06/30/2018) ⚡AMP
by Bob Anderson