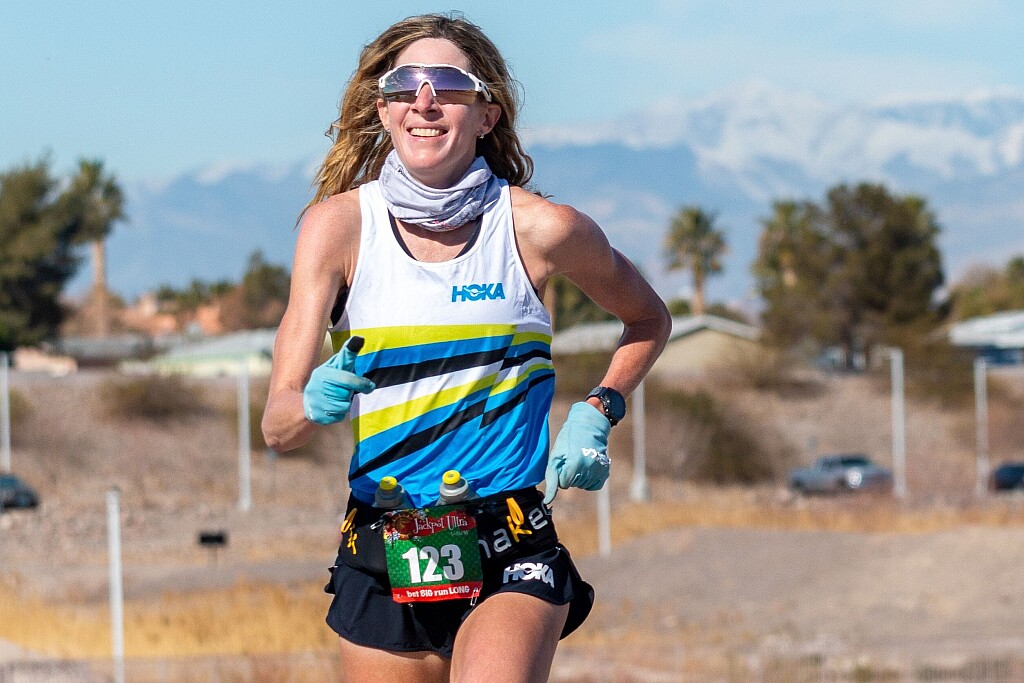 Renowned ultrarunner Camille Herron beat her previous world record 100-mile time at the Jackpot Ultra Running Festival in Henderson, Nev., in February, setting a new record that the USA Track and Field (USATF) committee has decided not to ratify, the Washington Post reported on Wednesday.

Herron, 40, won the race in 12:41:11, beating second-place (and first male) finisher Arlen Glick by more than 30 minutes and surpassing her own 2017 record of 12:42:40 by almost a minute and a half. The race doubled as the USA Track and Field 100-mile road championships, and Herron, who is a champion of clean sport and respected for holding herself and others to high standards in competition, was celebrated globally. A certified race is always remeasured (course verification) after a record is set–the Jackpot Ultra was measured post-race in February, found to be accurate, and Herron’s record was thought to be clear while not yet official. In October, USATF official Brandon Wilson returned to the Jackpot course and measured once again, determining that the course was short by 716 feet, coming in at 99.864336 miles.

The record ratification process is often lengthy, but there has been no clarification as to why the USATF returned to the course in October, without race director Ken Rubeli (who has since sold the race) present. Herron and Conor Holt (her husband and coach) have expressed frustration with the USATF’s process and lack of transparency, along with Rubeli, who sent a letter to USATF questioning the accuracy of measurements made eight months post-race.

“I set a world record in that race, and now they’re telling us that we don’t know whether the course was 100 miles or not,” Herron said to the Post. She shared that the situation has been stressful for her, and has impacted her performance in races since.

“My time is now that I’m in the best shape of my life. And, I mean, these moments can be fleeting. I put my heart and soul into that performance, and it was such a big deal for the sport and the history of the sport that it needs to count,” Herron said.

The Jackpot Ultra is held on a 1.17-mile loop, and the distance was questioned after Wilson (the measurer in February) attended the event, because his wife was running in the 100-mile race, and noticed a discrepancy between the course being run and the certified course map on the USATF website.

Former race director Rubeli explains that he changed one turn on the course for safety reasons, “due to a near collision between a runner and a baby stroller,” adding that he compensated for the change with precise cone placements on the course–something that wasn’t taken into account in Wilson’s February measurement.

Herron, Rubeli, and others are firm on their stance that Herron’s 100-mile record should stand, and the situation is ongoing. “It’s not a done deal yet that it’s unratified,” explains Herron. “USATF wasn’t working with Rubeli the last eight months, so we think the lack of communication created the current situation.”

Herron who describes herself as “propelled by joy and tacos,” has remained positive on social media, noting that she’ll be chasing several of her world records at the upcoming Desert Solstice Invitational, an elite-level event held on a track in Pheonix, Ariz.