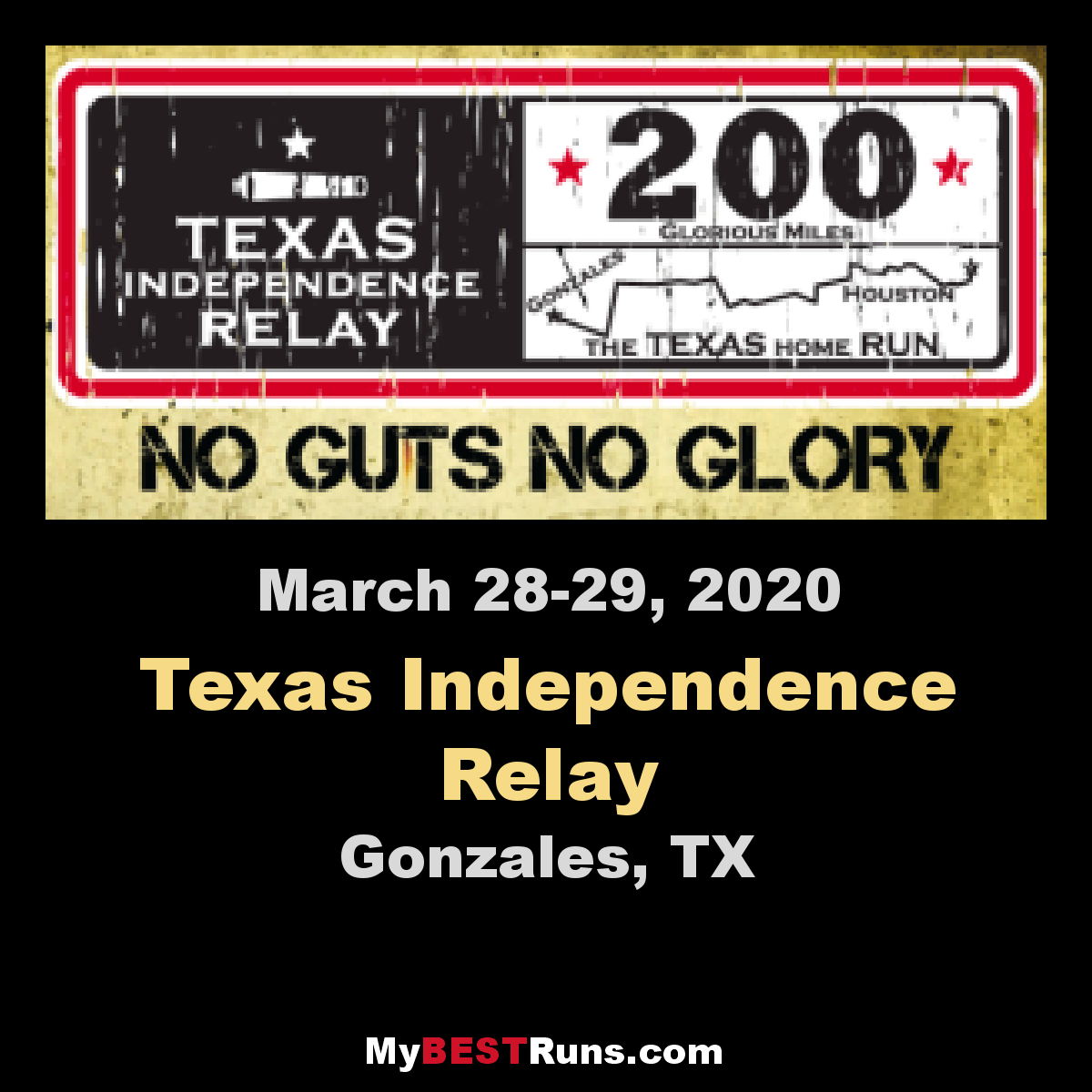 The Texas Independence Relay is composed of 36 relay legs of various lengths, totaling close to 200 miles. The course starts in Gonzales, where the spark of the Texas Revolution took place, and it finishes in the preimenent city of Houston, where Texas Independence was won! To tackle this formidable task, your team will have of up to 12 members (your choice!), and you will have an exceptional time furthering good friendships and making new ones!

You’ll encourage each other along the way while you visit the small cities of Gonzales, Shiner, Moulton, Flatonia, Schulenburg, Weimar, Borden, Columbus, Altair, Eagle Lake, Wallis, Orchard, Simonton, and Fulshear. Then, you’ll make your way through the incomparable city of Houston, experiencing it in a way you never have before! Racing on a team with your friends in this unique format over an incomparable span of Texas steeped with momentous history all amounts to a GREAT time that you’ll fondly remember for... well.. the rest of your life! This all takes place over Saturday and Sunday, March 30-31, and don’t forget the Texas Independence Party (the TIP!) on Friday, March 29! Come and take it… if you have what it takes! 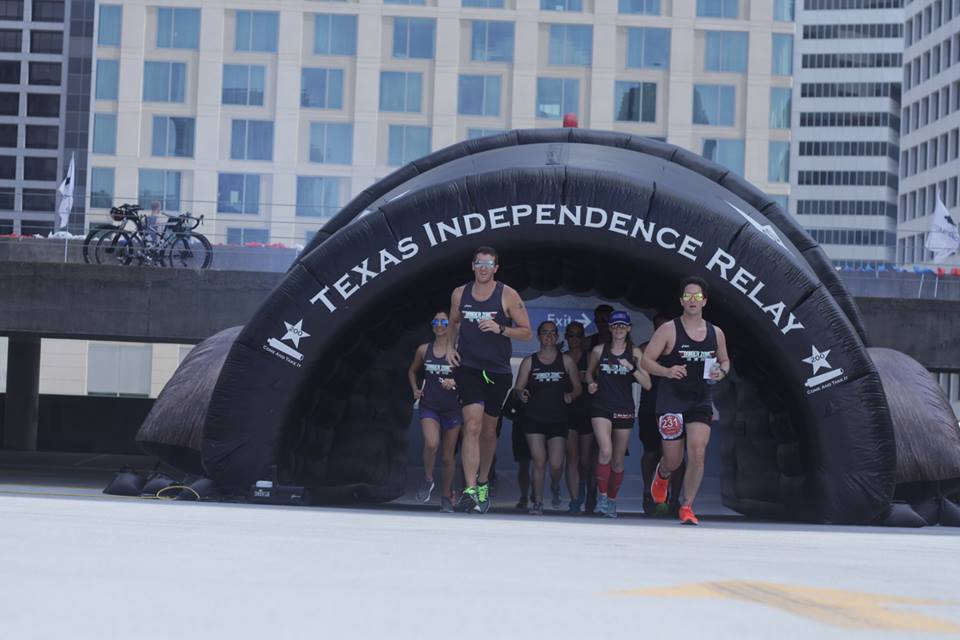 Bob Anderson
This looks like an exciting challenge. It is the type of relay I would like to run.
Race Date: 03/30/2019 Distance: 200 mile Relay 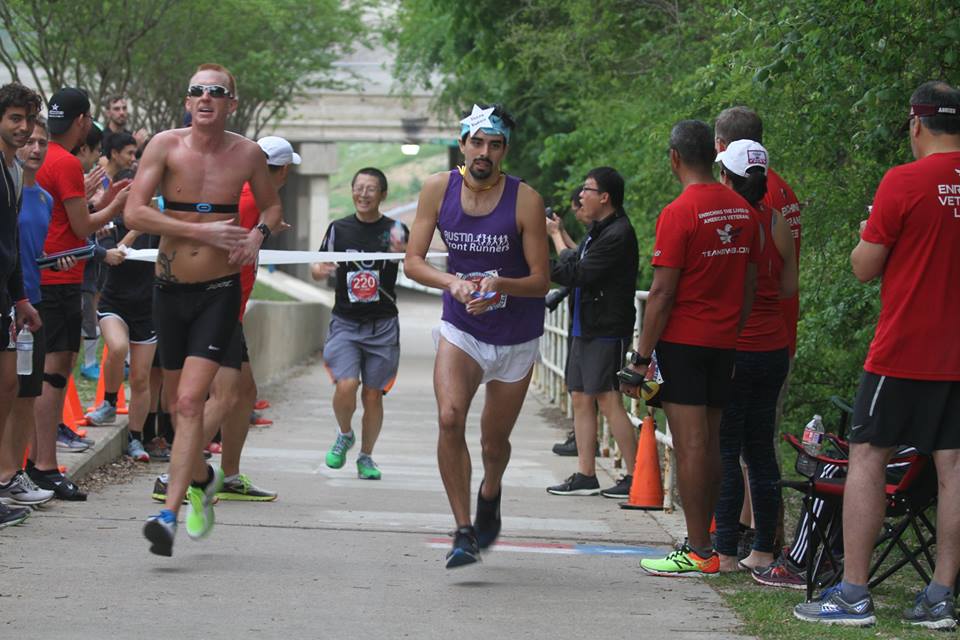 Gonzales is a wonderfully welcoming town, rich with history and attractive to tourists looking to escape the big city! Your entire team will run a small loop together around downtown, marking the commencement of your journey. You’ll enjoy picturesque rolling hills replete with blooming Texas wildflowers on perfect relay roads as you journey over rural dirt roads - even passing Sam Houston’s Tree! After leaving Gonzales, you’ll get a taste of smaller Texas towns with exceptionally large hearts! Shiner, Moulton, Flatonia, Schulenburg, and Weimar, you’ll appreciate each town’s individual flavor, but you will also note that they all possess a distinct relaxing quality. By the time your team reaches Columbus, the sun will have retired for the day.

Eagle Lake, Wallis, Orchard, Simonton, and Fulshear will be sleeping communities as you pass through (though at least a few will stay up to curiously observe your unrelenting journey through the night). Pressing on tirelessly toward the finish, you and your team will follow the beacons of flashing lights (other runners).

When you begin to make your way through Cinco Ranch on the west side of Houston, you’ll notice early indicators that a new day is being gifted to us! You’ll also become aware that you’re crossing the threshold between country and city. Between here and downtown, you’ll traverse paths that wind through pleasing parks (George Bush Park, Terry Hershey Park, Memorial Park, and the Buffalo Bayou). You’ll admire stately homes in well-preserved neighborhoods, and then, you’ll proudly stride into Houston’s very downtown, passing right by reflective sky scrapers before Gloriously finishing atop the TIR Tower!

Sam Houston could not have predicted the events leading up to March 2, 1836, the day the Texas Declaration of Independence was signed (and Houston was named the Commander-in-Chief), nor could he have anticipated all that would take place before the conclusion of the Texas Revolution.
The beginning of the revolution is recognized to have taken place 5 months earlier, on October 2, 1835, in Gonzales. Mexican soldiers attempted to retrieve a cannon that was previously given to the American colonists by the Mexican government. Already demonstrating the spirit of independence, the colonists replied about the small cannon behind them, “Come and take it!” A skirmish ensued, sparking the revolution and the long road to Texas independence.

One week later, General Martin Perfecto de Cos led an initiative to reestablish Mexican control over the Gulf Coast, but this was thwarted by Texian dissenters who seized a fort at Goliad. Shortly thereafter, the Battle of Concepcion and the small surprise attack called the Grass Fight went beyond simply straining relations.

For the better part of a week, from December 5th to 9th, the Siege of Bexar became the first serious engagement that resulted in surrender by General Cos and the Mexican Calvary. It also greatly added to General Antonio Lopez de Santa Anna’s conviction to drive the settlers out of Texas.

While Houston was signing the Texas Declaration of Independence at Washington-on-the-Brazos, Colonel James Bowie, Lt. Colonel William Barrett Travis, and Davy Crockett led over 200 Texians during their last stand at the Alamo. They were outnumbered by the Mexican army by a ratio of greater than 10:1, yet they held the fort for 13 days until the siege ended on March 6, 1836. All of the Texian fighters were executed and the surviving women and children were told to spread word to the settlers to get out of Texas.

On March 13, General Houston ordered everyone to leave their homes and belongings and to burn them all (so the Mexican army wouldn’t benefit from usage). The settlers fled eastward, and their flight became known as the Runaway Scrape.

Two weeks later, Santa Anna ordered the execution of 345 men at Goliad. Similar outcomes occurred at the battles of Refugio and Coleto. In all, 400 were executed.

On April 21, 1836, General Houston and his modestly-sized volunteer army surprised and defeated the Mexican army at the Battle of San Jacinto amidst cries of “Remember the Alamo!” and “Remember Goliad!”

It’s been said that in order to see ahead, you must first look back from whence you came. If that’s true, then Texas has a bright future since it was not that long ago that many exhibited valiant qualities in claiming Texas’ Independence. Texas’ history is so rich that this abbreviated sampling is an injustice. When you delve into it more, you’ll gain a greater appreciation for it just as we have.

The Come And Take It Flag and The San Jacinto Monument

Almost instantly after Colonel John Henry Moore uttered the challenge “Come and take it”, it became a popular slogan used in the Texas Revolution. Not only was it popular slogan back then, but the flag, originally fashioned out of a wedding dress, featuring a black star, canon, and the daring motto still represents Texas’ independent spirit today!

The San Jacinto Monument (which also has a museum and amphitheater) was dedicated “to heroes of the Battle of San Jacinto and all others who contributed to the independence of Texas.” Its construction began in 1936 (going until 1939), and it is made of Texas shell stone. This monument impressively stands at 570ft – the tallest war memorial and tallest monument in the world (surpassing the Washington monument by 15ft). Its shaft is 48 feet across at its base and 19 feet at the top, which holds the 220-ton star that rests on the monument’s apex.