The Athens Classic (authentic) Marathon is an annual marathon road race held in Athens, Greece, normally in early November. The race attracted 43.000 competitors in 2015 of which 16.000 were for the 42.195 km course, both numbers being an all-time record for the event. The rest of the runners competed in the concurrent 5 and 10 kilometres road races and the racewalking contest.

The marathon course is based on the legend from which the race gained its name: Pheidippides, a messenger in Ancient Greece, ran from the Battle of Marathon to Athens to announce the Greeks' victory over the Persians. The provenance of the competitive race is traced back to the Marathon race at the 1896 Olympics. The Athens Classic Marathon began in 1972 as a joint venture between the Greek tourist board and athletics association. The race came under the auspices of the current organisers and SEGAS in 1983 and has since become a major race, being awarded Gold Label Road Race status by the IAAF.

It is perhaps the most difficult major marathon race: the course is uphill from the 10 km mark to the 31 km mark – the toughest uphill climb of any major marathon. The course begins in the town of Marathon, where it passes the tomb of the Athenian soldiers, and it traces a path near the coast through Nea Makri. Following the steep rise, the course goes lightly downhill towards the city of Athens. It passes a statue of a runner (Ο Δρομ?ας) in the city centre before finishing up at the Panathinaiko Stadium; a site for athletics competitions in ancient times and the finishing point for both the 1896 and 2004 Olympic marathons. 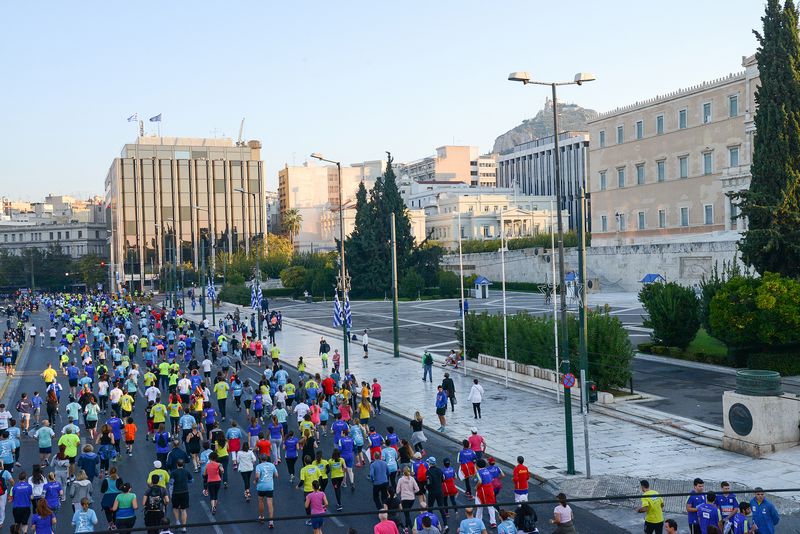